Skip to main content
You are the owner of this article.
Edit Article Add New Article
You have permission to edit this article.
Edit
Welcome, Guest
Home
News
Sports
Opinion
Obituaries
Features
Religion
e-Edition
Classifieds
Submission Forms
Share This
1 of 2 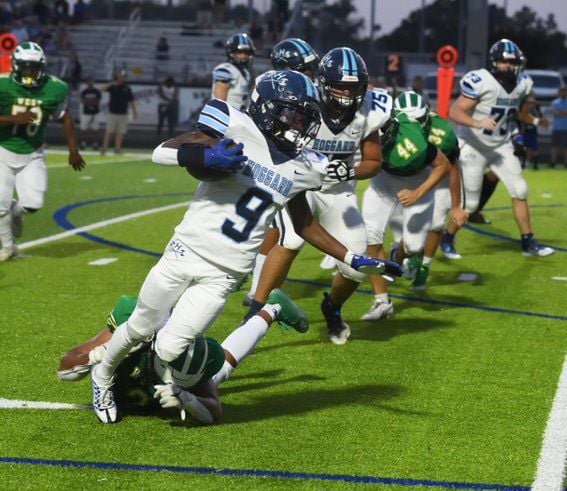 Mikal Simpson attempts a shoestring tackle Friday night at West Brunswick in a loss to Hoggard. 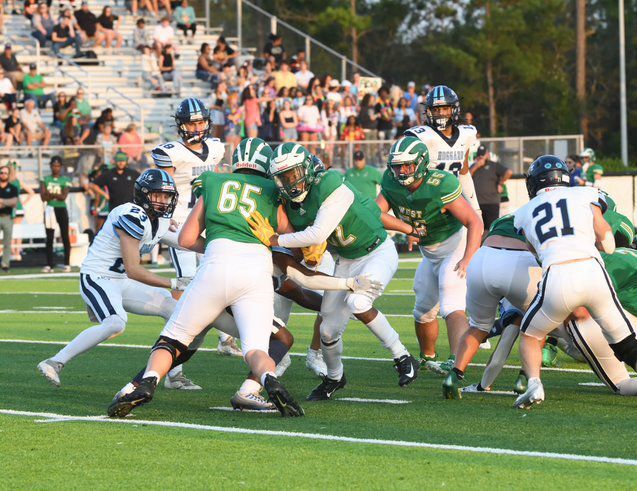 Mikal Simpson attempts a shoestring tackle Friday night at West Brunswick in a loss to Hoggard.

West Brunswick went into Friday night’s Mideastern Conference opener with Hoggard knowing they would be running uphill against the Vikings for the whole game.

What they faced was a Hoggard team that was running downhill all game, scoring touchdowns on six of eight possessions while only putting once and running out the clock in the fourth quarter for a 49-7 win.

West Brunswick’s Avery Clemmons took the opening kickoff and ran it back to the 35-yard line. The Trojans then went to heart of the offense running quarterback Javan McCray on a keeper, wide receiver J.J. Cobb on a sweep and running back Kevon Daniels up the middle, but only gained nine yards and faced 4th and 1 at the 44.

West went for the first down at midfield but Daniels was stopped and Hoggard took over at West’s 43-yard line.

Viking quarterback Hudson Wilharm threw a first down pass to Aniziyon Session for 27 yards and then handed off to M’Kel Bellamy who scored the first touchdown from 16 yards out. With the extra point kick, Hoggard led 7-0 with 10 minutes to play in the first quarter.

West got the ball at the 33-yard line on the kickoff and tried to run again with Daniels and McCray but lost yards and faced 3rd and 15. On the next play McCray passed to Cobb in the left flat and he torched the Vikings defense for a 48-yard run after the catch to the Hoggard 23.

Daniels burst through the middle of the line on second down and picked up 18 yards for a 1st and Goal at the five yard line, but that would be as close as the Trojans would get to the end zone until the fourth quarter as the team went backwards on the next four plays.

Daniels ran up the middle on first down but was knocked back to the 10-yard line.

McCray rolled out on second down but slipped, and was downed at the 18. After an incomplete pass on third down, West went for it on fourth but McCray was sacked and West turned the ball over on downs once again.

“JoJo’s nursing and an ankle, so we’re not really comfortable with him anything beyond you know, an extra point field goal range,” West head football coach Caleb Pardue said.

“And when they are scoring touchdowns, you’ve got to respond with touchdowns. We moved the ball. we did some good stuff. We’ve just got to keep the good stuff going and not make mistakes. I’m proud of them. I love them. It’ll be all right. We knew Hoggard was going to be a challenge. And we knew we were down and we’ve got some injuries. We’re asking guys to play positions that they’ve not played a lot at. So, we’ll keep it moving and we’ll be alright.”

Bellamy broke out for a 27-yard run on the first play and then the only thing that slowed down Hoggard’s next drive was a fumble, which the Vikings recovered. Bellamy had another 27 yard run on the drive to put the Vikings at West’s three-yard line, where Blake Edwards took the ball into the end zone. Another extra point kick made it a 14-0 game with 4:30 to play.

West Brunswick’s Cylil Lee made a fair catch at the 22 yard line on the kickoff and the Trojans only moved two yards on the three-and-out series, JoJo Hamric punted for the first time and put the Vikings on their own 23-yard line.

West forced a third down after keeping running back Cayden Hallor in check on two plays but were drawn offside to give Hoggard a new set of downs at the 37.

But Hoggard was backed up on a personal foul penalty and faced 1st and 20 at their 22. The Trojans kept Hallor from breaking out and Hoggard threw a pair of incomplete passes to bring up 4th and 18 and the Vikings punted the ball away.

West started again at their own 23-yard line with 20 seconds to go in the first quarter and ran out the clock running Daniels twice. On third down, McCray’s pass fell incomplete and West went three-and-out for a second time. Hamric punted the ball to the Hoggard 37 yard line.

The Vikings ran Hallor again and West continued their success stifling him, bringing up a 4th and 1 at the 46. Hoggard tried to draw the Trojans offside but only burnt a timeout.

Instead of punting, they went back to running Bellamy, who gained a first down and wouldn’t go down. He broke free of the West defenders to run for a 530yard touchdown. Another point after kick gave Hoggard the 21-0 lead with 10 minutes to go in the first half.

The sputtering Trojan offense sprung to life for one play on the next series when McCray connected with Cobb on first down for a 23-yard pass to midfield. But Hoggard pushed West backward on the next three plays to force another punt by Hamric.

Hoggard scored three plays later after a screen pass from Wilharm to Hallor sprung him for 41 yards and then Wilharm passed to Session at the West 20 and he ran fee to the end zone. The extra point made it 28-0 with seven minutes to play.

Another three-and-out forced West to punt from the 17-yard line and Hamric’s kick went to the Hoggard 46.

A nine-play drive that focused on Bellamy running the ball moved Hoggard steadily toward the end zone and Bellamy finished the drive from four yards out. After the kick Hoggard took a 35-0 lead.

West finished the first half with a 10-play drive of their own. Starting from their 22 after the kickoff, they moved to the 50 yard line running Daniels and with a pass interference penalty on an incomplete pass to Cobb. McCray then passed to Daniels, whose catch and run moved them to Hoggard’s 15-yard line with 35 seconds to play.

But a pair of incomplete throws and nowhere for Daniels to run on third down left West facing 4th and 10 with five seconds on the clock.

The final play of the half ended with a fumbled snap that McCray picked up and looked for a lane to run in but he was tackled as time expired.

Hoggard received the kickoff for the third quarter and only needed five plays to go 55 yards behind Bellamy, who then scored on a screen pass from 21 yard out. The Vikings extended the lead to 42-0 with the extra point.

West picked up a first down on a pass from McCray to Cobb to reach their own 40-yard line on the first series of the second half but only went backwards until they faced a 3rd and 17 at the 33. Daniels showed his ability to break a play at any time with a 16-yard run but eh was stood up trying to get the last yard on 4th and 1 at the 49 and West turned the ball over at midfield.

Hoggard switched to running back Tamear Webb to run the ball and the clock in the third quarter, moving to the West 13 yard line in five plays. Then Wilharm found Blake Edwards in the end zone for another touchdown to lead 49-0 with two minutes left in the third quarter.

West was determined to get something out of their final drive after Daniels took the kickoff from the two-yard line to the 33. The Trojans moved to the 42-yard line where they faced a third down but McCray hit Cobb on a slant pass and he took it 30 yards.

“What we try to do is just try to keep calm and just just keep playing. Like in a second half, we just try to come out and have fun. Keep a positive attitude and just stay locked in,” McCray said.

Cobb was tripped up on the tackle and came out of the game.

Daniels was dealing with leg cramps, but he came in for one more play to pick up a first down on 3rd and 3, then West went to Dylan Bellamy who ran up the middle for a 17-yard touchdown run. Hamric kicked the extra point to make the score 49-7.

Hoggard ran out the final seven minutes of the game to preserve the final score.

“We’re through the gauntlet now. Now it’s time for us to turn the corner. We knew, with the schedule, we were going to have to play a tough nonconference schedule. And then we draw Hoggard the first week, and they’re the champions so it’s hard to get the good stuff rolling,” Pardue said.

“At the end tonight, we found a couple of pieces defensively, freshmen who are doing things that we’re asking them to do, and they’re doing it full speed. now we’re just going to move pieces around, figure out what we’ve got and keep working. There’s nothing else to do,” Pardue said.

“Obviously, it’s not the result we wanted and we kind of shot ourselves in the foot early offensively, just blowing some calls, and then the game got away from us. We’ve got to do a better job of working through that and then be able to respond. We’re going to be all right, we’re going to be okay. This time last year, we were sitting in the same spot and then, reel off two big wins in a row. I expect nothing less from this group.

“I know, the old guys are frustrated, we’re playing some youth at some spots on defense and we’re going through growing pains. Hopefully, now we can take some giant leaps forward. So we need to turn the corner. And we will. We will just keep coaching and do what we need to do and make adjustments, keep rolling.”