BEST VALUE! Like never before, The Brunswick Beacon delivers real value with unlimited full digital access plus home delivery. Rates are for In-County subscriptions; call 910-754-6890, option 4, for Out of County or Out of State rates.

If you need to purchase a subscription.
You are the owner of this article.
Edit Article Add New Article
You have permission to edit this article.
Edit
Welcome, Guest
Home
News
Sports
Opinion
Obituaries
Features
Religion
e-Edition
Classifieds
Submission Forms
Share This
1 of 4 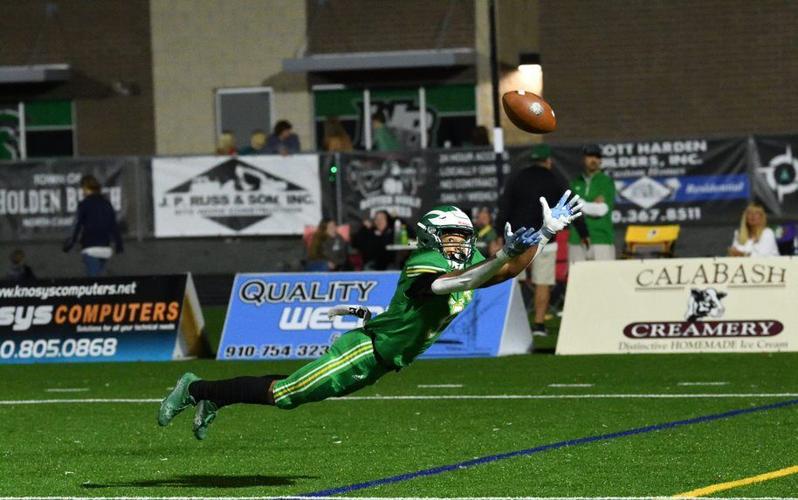 West Brunswick senior Jordan McCall dives in an attempt to make an interception in the end zone to stop a North Brunswick touchdown drive. 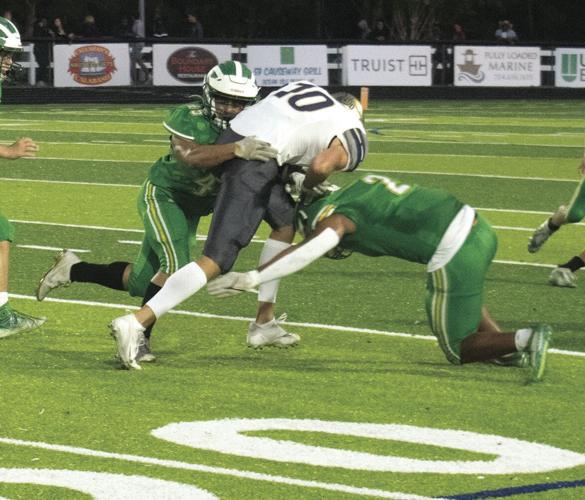 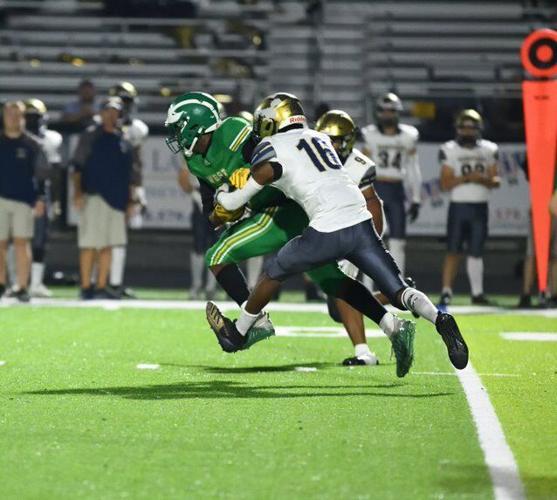 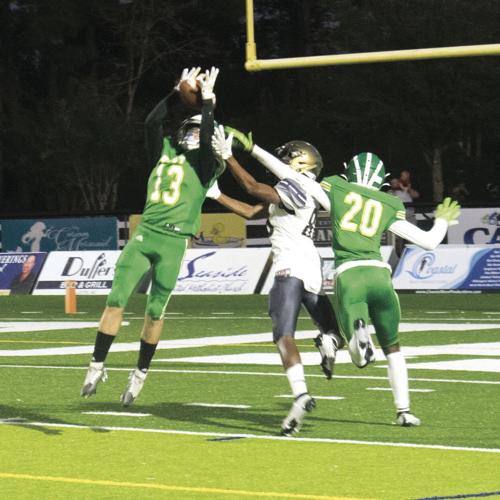 West Brunswick's Avery Clemmons knocks away a pass to the end zone by North Brunswick on Friday night.

West Brunswick senior Jordan McCall dives in an attempt to make an interception in the end zone to stop a North Brunswick touchdown drive.

West Brunswick's Avery Clemmons knocks away a pass to the end zone by North Brunswick on Friday night.

West Brunswick already had a homecoming challenge by facing 6-1 North Brunswick in M.H. Rourk Stadium on Friday night, but turning the ball over twice helped the Scorpions take a 19-0 lead in the first half on the way to a 50-15 victory.

The Trojans received the kickoff from the Scorpions and started at their own 23-yard line but on their first play a shotgun snap bounced off of senior quarterback Javan McCray’s hands and North Brunswick recovered the ball at the 12. Three runs up the middle scored the Scorpions’ first touchdown by running back Jabril Dashiell. The point after kick made it 7-0 only a minute into the game.

“We told our guys that’s a really good football team. It was going to take our best effort and we just got off on the wrong foot. A fumble and they scored. We’re just not good enough to do that,” West Brunswick head football coach Caleb Pardue said.

The Trojans were able to move the ball to midfield on their second drive, picking up a first down at the North Brunswick 47-yard line on an end around by J.J. Cobb, but the drive stalled on an incomplete pass on 3rd and 7 and West punted the ball to the Scorpions at the 12.

North Brunswick quarterback Tarron Green ran twice on quarterback keepers that started an eight-play drive, which included picking up a first down on 3rd and 6 when he rolled out looking to pass, couldn’t find an open receiver but scrambled on the play. North reached the Trojan 45-yard line when running back Eric Mosely found a hole and broke free for a touchdown run. North attempted a two-point conversion pass that fell incomplete for a 13-0 score with 4:35 to go in the first quarter.

Trojan senior Kevon Daniels took the kickoff at the 23-yard line and ran it back to the 50. Cobb ran the ball twice, on a handoff and then a pitch, that gave West a first down at the scorpion 33-yard line, but he fumbled on the next play and North recovered the ball for their second turnover.

Taking over at their own 39-yard line, the Scorpions ran the ball behind Green and Mosely to move to the West 35. Then green took a shot at the end zone but the ball was nearly intercepted by West’s Avery Clemmons. North went back to the run with a handoff to Mosely that moved the ball to the 23-yard line before the end of the first quarter.

North started the second quarter with another incomplete pass but then Green hit wide receiver Dachaune Green with a nine-yard pass. Then, on an option keeper brought the ball to the six-yard line. On first-and-goal Jabril Dashiell ran for another short distance touchdown. Once again, North Brunswick tried a two-point conversion pass but West’s JoJo Hamric knocked the ball away to keep the score 19-0 with just under 11 minutes to play in the half.

Daniels took the kickoff at the five-yard line and ran it back to the West 34, but the Trojans went three-and-out after only moving the ball five yards and punting from the 39.

North brought the ball back to their own 35-yard line but were flagged on the return and backed up to the 25. They kept moving backwards after another penalty made it first and 15 at their own 20. But Green found a hole on a quarterback keeper and ran for 46 yards to the West 34. North picked up another first down running the ball to the 21-yard line and then Green passed to wide receiver Caden Cook for a first-and-goal at the 10-yard line. Mosely ran the ball twice to reach the end zone with 6:21 left in the half. The Scorpions kicked the extra point to take a 26-0 lead.

After a squib kick on the kickoff gave West the ball at the 34-yard line, a pair of incomplete passes and an eight-yard run by Daniels on third down brought up 4th and 2. The Trojans chose to go for it with McCray running an option and pitching to Daniels, who took the ball around the left side and found room to run what appeared to be a Trojan touchdown. But a flag was thrown for a block-in-the-back that put the ball at the 48-yard line.

A quarterback keeper by McCray, another pitch to Daniels and a pass to Daniels in the flat only moved West to the Scorpion 46 where they faced another fourth-down. This time McCray pitched to Cobb but he was tackled for a loss and West turned the ball over to North at midfield.

Back-to-back penalties pushed the Scorpions to 1st and 27 at their own 36-yard line, but Mosely ran for 16 yards on first down and Green connected with Cook again on a 16-yard pass to the West 27. After a short run by Green on first down, he threw for the end zone on second down and connected with wide receiver Timothy White for a touchdown. Kicking another extra point, North took a 33-0 lead with 1:40 to play in the half.

West Brunswick made the most of the minute-and-a-half left on the clock after receiving the kickoff at the 36-yard line. On second down, McCray scrambled and threw to Mikal Simpson for a 15-yard catch and 19-yard run to the Scorpion 31. After an incomplete pass, West put the ball in Daniels’ hands for a 19-yard run to the north 12 that he followed with a touchdown run. On the two-point conversion, McCray handed the ball to Daniels again, who ran it in to make it a 33-8 game with 30-seconds left.

That gave the Scorpions a little too much time as Armstrong ran back the kickoff to North’s 35-yard line and Mosely found a hole on second down for a 40-yard run to the West 25 where kicker Jacob Molina was good from 42-yards out on a field goal that ended the half with North up 36-8.

North Brunswick received the kickoff to start the second half and took the ball to the 34-yard line. After picking up 10 yards on their first play, a pair of penalties pushed the Scorpions back to face 2nd and 21 from their own 33. An incomplete pass brought up third down when the Trojans stopped Armstrong on a sweep and forced a punt.

West got the ball on the 19-yard line and McCray hit Daniels on a slant pass for an 18-yard gain, but passes intended for Simpson and Jordan McCall were incomplete and brought up third down. McCray threw a screen pass to Daniels but he was tackled for a loss and the Trojans had to punt on 4th and 16 from their own 31.

Armstrong received the 29-yard punt for the Scorpions at their 40-yard line and found a seam up right side for a 60-yard return for a touchdown. The extra point made it 43-8 with eight minutes left in the third quarter.

North kicked off with another squib kick that Daniels brought out to West’s 37-yard line but after another three-and-out the Trojans punted from their own 35-yard line.

Armstrong ran it back to North’s 44 and the Scorpions’ running backs Tyshawn Bowen and Dashiell split carries to move the ball to the West 39-yard line. Then Michael Green came in and had a touchdown run of 39 yards that put North up 50-8 after the extra point kick.

West got the ball back with 4:30 to go in the third quarter. Daniels ran back the kickoff to the 38-yard line where McCray rolled out on first down looking to pass and picked up 15 yards after a scorpion facemask penalty. Daniels ran the ball to the North Brunswick 37 and then McCray connected with McCall on a pass for a first down at the 26-yard line. An incomplete pass and a short gain on a quarterback keeper put the Trojans at 3rd and 9 from the 25 as the third quarter ended.

With a running clock in the fourth quarter, West took a shot into the end zone on the first play but the pass fell incomplete. That brought up 4th and 9 from the 25 and the Trojans went for it, with McCray rolling out to his right and hitting Daniels with a touchdown pass. Hamric kicked the extra point for a 50-15 score with just under 11 minutes left in the game.

North Brunswick ran the ball on a nine-play drive to drain the clock, reaching first-and-goal at the 2 yard line before taking a knee on four snaps turn the ball over on downs.

West handed the ball to Dylan Bellamy for one final play to run out the clock.

“We’re going to keep on working. Keep on doing what we’ve got to do to make adjustments. It just seemed like the ball wouldn’t flow our way at any point in time. You know, the ball bounces your way when you’re a good football team and when you’re doing the right things all the time,” Pardue said.

“We’ve just got to keep working. We’ve got to find something that works these last two weeks to maybe backdoor the playoffs. I told the kids I love them and I’ve not stopped loving them. In life, you learn lessons in victory and you learn lessons when you lose them like this. And you know these lessons they’re very hard, they’re not easy. And so we’re just going to keep getting better and try to find something that works these last weeks and try to help the seniors go out on the right foot.”