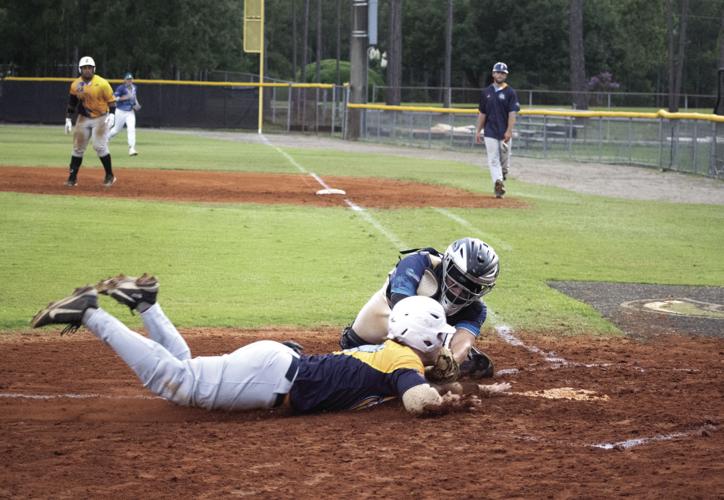 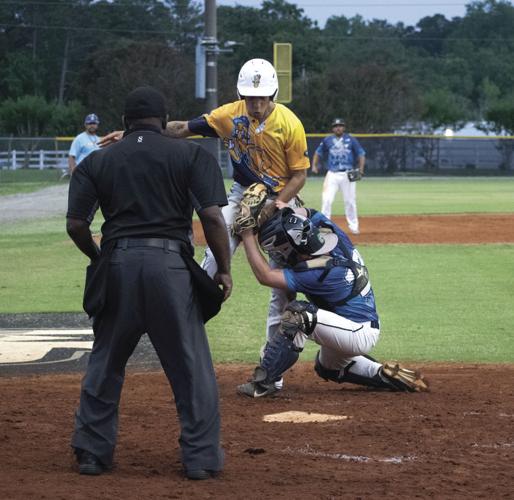 The Brunswick Surfin’ Turfs lost a Saturday night home game to the Swepsonville Sweepers 10-6 on June 11, but the number with the biggest impact in the game was the seven errors recorded by the home team.

“I don’t know if the focus wasn’t there. I thought the pitchers did a good job. I mean, you only give up five hits. you can limit walks and hit-by-pitches, which we haven’t been doing the last two games. That’s why we lost the last two. But the pitchers giving up five hits in a nine inning game, it’s pretty good. And we left them out to dry,” Surfin’ Turfs coach Collin Butte said.

“There’s really only one word I can come up with and that’s embarrassed. It was probably one of the most embarrassing defensive efforts, and for probably, the first six innings of the game, offensive efforts too. We were not actually doing anything wrong at the plate. just not a lot of energy and just heads not screwed-on straight and focusing.”

After a scoreless first inning, Brunswick took a 2-0 lead in the second with a pair of walks and a hit batter loading the bases for David Laurenti and Josh Barnhill to drive in one run each.

In the top of the third, Turfs starting pitcher Matthew Lombard got into a bases loaded jam, then walked in one run.

Then on a two-out groundball, shortstop Banks Engle made a bad throw to second base that allowed the second run in, but first baseman Sam Stowe stopped a lead change by picking up the ball and throwing home where catcher Nick Chuisano dove to tag out the runner sliding into home plate.

The Sweepers took the lead 3-2 in the top of the fourth inning by taking advantage of the Turfs’ pitching change to Kaiden Stanley.

The new pitcher struggled from the start by walking his first two batters.

After a pop fly out, Chuisano took a risk and tried for a pickoff play at first but the ball sailed into right field, moving the runners to second and third bases.

A line drive into center brought in one run but the throw home was on time and on target for Chuisano to block the plate and tag the second runner out.

Brunswick loaded the bases in the fifth inning but stranded the runners on a two-out strikeout.

Swepsonville added to the lead in the sixth with an error at second putting a runner on base for an RBI-triple to make it 4-2.

In the bottom of the sixth, the Turfs Nick Graney hit a two-out triple, but he was hung up on third by a pop fly.

Then a two-RBI double past the second baseman into right field drove in two runners for a 6-2 lead.

Another walk reloaded the bases and a wild pitch brought in another run, 7-2.

The scene replayed as a walk loaded the bases again for a wild pitch to make it 8-2.

The Turfs made their comeback attempt in the bottom of the seventh against a new pitcher for the Sweepers.

The pitcher stepped off the rubber thinking time out was called, but instead was called for a balk that scored a run, 8-3.

Another walk and the bases were loaded again.

Brunswick benefitted from an error when a hit that dribbled to the third baseman was bobbled before the throw to first. The runner was safe at first and a run scored, 8-4.

A single into centerfield followed to make it 8-5. A sacrifice fly ball to right field scored one more for an 8-6 game with runners at the corners.

But a strikeout ended the scoring streak.

In the top of the eighth inning Swepsonville lead off with a standup double into the left field corner. A wild pitch moved the runner to third and a line drive into center scored the runner.

The Turfs then got two outs but couldn’t end the inning when a groundball to the third baseman became an error on the throw to first.

The next batter hit a line drive to left center and the runner at second came around third heading for home. A throw from centerfielder was on time, but was cut off, allowing the run to score for the 10-6 lead.

The Turfs went down in order in the eighth and ninth innings as the Sweepers preserved their win.

Brunswick will be back at Mike Alderson Field on Sunday, June 19 for a 2 p.m. game against the Sanford Spinners.

“We’ve got six in a row on the road, so it doesn’t get any easier. And that’s what summer baseball is all about. You’re out here playing with guys you’ve never played with before, for a coach that you’ve never played with before. I was expecting to take two- to three weeks to get closer to each other and closer to how we’re going to play,” Butte said.

“So I think it’s just us getting together. And I think this next six games on the road will be good for us to come together, kind of learn a little bit more about each other and hopefully get a little bit better.”