Skip to main content
You are the owner of this article.
Edit Article Add New Article
You have permission to edit this article.
Edit
Welcome, Guest
Home
News
Sports
Opinion
Obituaries
Features
Religion
e-Edition
Classifieds
Submission Forms
Share This
1 of 3 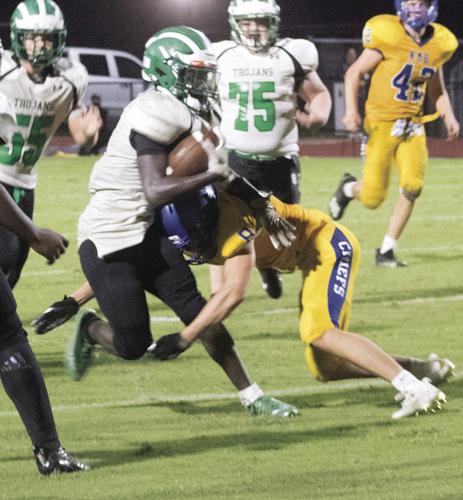 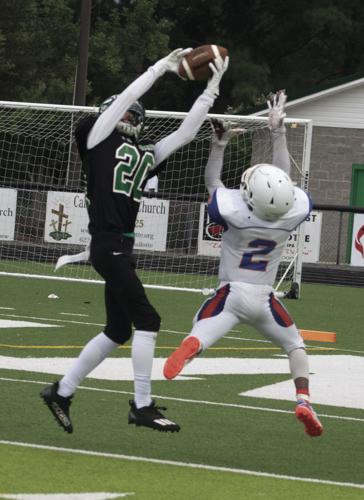 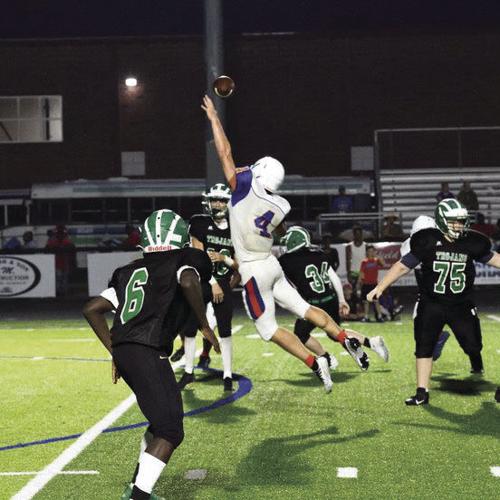 A pass from West Brunswick quarterback Tyler Rodriguez to JaQuell Davis floats over the arm of a Whiteville defender who jumped to block the pass in the Trojan JV football team’s opening game on Aug. 25.

A pass from West Brunswick quarterback Tyler Rodriguez to JaQuell Davis floats over the arm of a Whiteville defender who jumped to block the pass in the Trojan JV football team’s opening game on Aug. 25.

“We grew a lot today and that’s the best thing. There was a lot of fight throughout the entire game. We just kind of let some plays get away,” Trojan JV football coach Mike Head said.

The teams played a scoreless first half before West Brunswick took the lead in the third quarter 6-0.

“It was 0-0 at halftime. We got in the red zone twice, early in the first half. But we didn’t come away with anything. Ja (JaQuell Davis) was the one who ran in the score, in the third quarter. We almost had the two-point conversion, which would have been huge because we forced them to miss their extra point that forced overtime. But it went in and out of our receiver’s hands, it’s going to happen. It wasn’t a lack of effort or anything like that. It’s just part of the game.”

North Myrtle Beach tied the score 6-6 in the fourth but missed the extra point kick and the teams played to a standstill to the final whistle.

West won the toss in overtime and lined up for a 1st and goal at the 10-yard line. But the Trojans only went backwards after two personal foul calls pushed them back to a 4th and 38. They turned the ball over on downs after an incomplete pass while going for the end zone on fourth down.

North Myrtle then took their shot from the 10-yard line. After losing five yards on first down when the Trojans’ Michael McLaran made a tackle in the backfield, West gave the yards back with a penalty. The Chiefs then ran the ball up the middle twice and scored on a 3rd and 6 to win the game.

“We took a huge jump from last week to this week. And we are finally getting the right pieces where they need to be. We’re still working on that. It’s a work in progress. But for the team to get this close, this fast, especially how freshmen-heavy we are, that’s a good sign. It’s just the maturity factor. We’ve just got to get it there,” Head said.

“Defense is a little bit easier to pick up sometimes. They’re picking up the nuances, they’re starting to figure out their keys. The offense still has some work to do. And the offense is always going to be the most difficult thing to pick up. These are young men that are coming together, some of them are playing together for the first time. It’s trust and it’s all part of a process. They’re getting there. The little things are what’s going to make it a more successful program down the road because they turn into big things. When we start getting the small details figured out, the big details fall into place.”

The Trojan JV opened the 2022 season hosting Whiteville at M.H. Rourk Stadium on Aug. 25 but the visitors got the better of the home team in a 30-12 win.

“(We) competed. I’ll give them that. That was one thing we talked about at the end of the game is that the team kept fighting. (Losing) 30-12, they had every reason to kind of lay down and stop, but we still kept fighting. So that’s one positive. They do have the fight in them,” Head said after the home opener.

“Now we have to work on execution. And this was the first live ball they’ve seen, though. They haven’t had any scrimmages or anything like that. So what we were hoping for, what we were expecting, isn’t necessarily what we got to witness. But it gives us an opportunity now to know what fixes (to make) and who can fit better where.

“We threw different bodies out there, especially in the second half on defense. You could kind of see change happen, a little bit better. We made some changes on the offense too,” Head said.

“We’re trying to use this as an opportunity to see who can do what and go where and who can get better at certain spots. Because again, we didn’t get a single scrimmage. It is what it is and the kids played hard, so for that I’m very proud of them.”