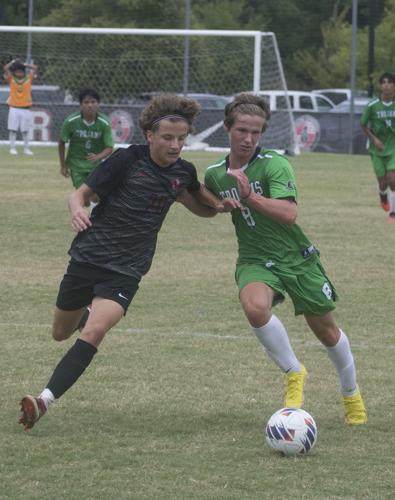 The West Brunswick varsity and JV soccer teams began their season with a pair of scrimmages with Coastal Christian in Wilmington on Aug. 10. 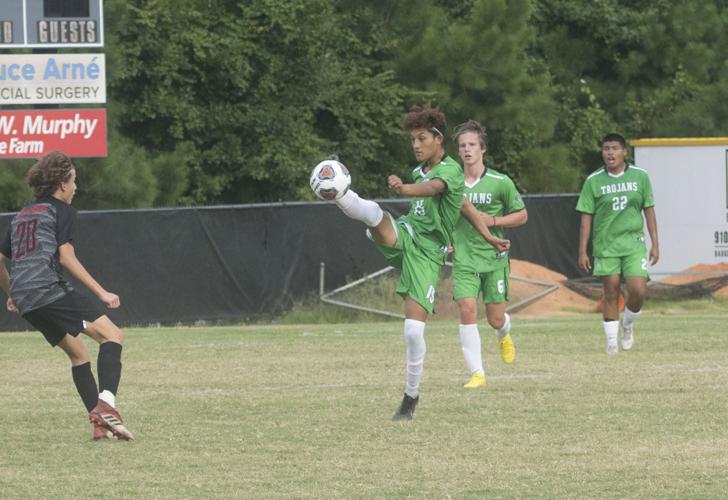 The Trojans’ varsity soccer team opened the regular season with a 2-2 tie game against Whiteville. 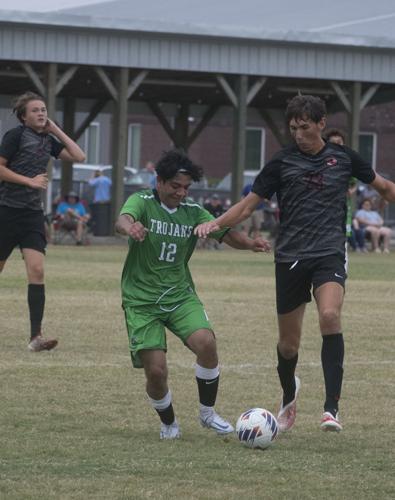 The West Brunswick varsity soccer team returned all eligible players from the 2021 team to continue to build the program under head coach Emanuel Sarkorh. 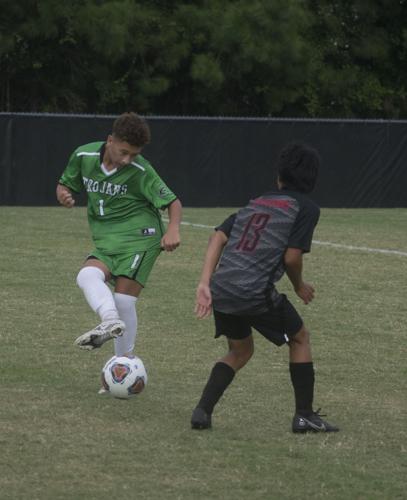 West Brunswick soccer brought back the JV team for the 2022 season.

The West Brunswick varsity and JV soccer teams began their season with a pair of scrimmages with Coastal Christian in Wilmington on Aug. 10.

The Trojans’ varsity soccer team opened the regular season with a 2-2 tie game against Whiteville.

The West Brunswick varsity soccer team returned all eligible players from the 2021 team to continue to build the program under head coach Emanuel Sarkorh.

West Brunswick soccer brought back the JV team for the 2022 season.

The West Brunswick varsity soccer team kicked off the 2022 season in Whiteville against the Wolfpack on Wednesday, Aug. 17 taking a 2-0 lead in the first half before Whiteville made a comeback to end the game in a 2-2 tie.

“It was a good game. I think if you compare us from last year to this year, I think that’s a massive improvement. I think when we played Lumberton last year it was like 14-5,” Trojan second-year head soccer coach Emanuel Sarkorh said.

“I think going into the season, we’re a new team, we just kind of assumed certain guys would play certain positions. A scrimmage against Coastal Christian (Aug. 17) showed us we might need to tweak things a little and that helped us against Whiteville.

I would say out of 80 minutes we possessed the ball for 50 minutes. We had a good attack. In the final 25-20 minutes, I think my boys lost their legs,” Sarkorh said.

“But I think it was a good game. I think Whiteville came out with energy when they were down 2-0. It gave us a really good, proper game. Both teams are really now going to go into the season knowing ‘this is what we can do.’ We both came out with a draw. I’m happy with the result. I’m proud of my boys and happy for them. Now we can see if we can win one game at a time.”

Seniors Osler Aguilar and Allen Olmedo scored the Trojans’ first half goals against the Wolfpack.

“I know last year our (total) scoring was about five goals. The fact that we got two after the first game shows a lot of positives,” Sarkorh said.

Aguilar and Olmedo are two of the returning players from Sarkorh’s first year coaching soccer at West.

“Everybody returned back from last year and we have a good group of incoming freshmen. So the boys are really excited,” Sarkorh said.

The excitement extends to bringing back a JV team to continue to build the West soccer program.

“We finally got our JV program back. The reason I pushed for the JV program is for the development part of the game. With a lot of kids coming out of middle school, I think it’s unfair to them just to push them straight into varsity. That leap, I think you have a few that can make it, but you have so many who are just trying to adjust to high school, especially coming out of eighth grade. You’ve got to adjust to high school in general before adjusting to high school soccer. It’s a different ballgame.

“Beside that, we’ve got great numbers, great turnout, great support from the parents this year. All my boys are really hard-working.”

Sarkorh said a number of players who came out for West soccer spent time with his summer program and then talked to their friends.

“Because I’m part of Levi United Football Club youth academy, putting the academy team out there we were able to use that as a recruiting aspect for our kids,” Sarkorh said.

“A lot of guys who came out of middle school, I was able to work with them and give them a positive impression and I think that was our recruiting tool.”

Sarkorh said word of mouth from kids who played with the academy team brought out a lot of young players to the Trojan soccer program.

Sarkorh added with the new field house for the football team, the soccer team has use of the old field house, which along with new uniforms and equipment this year was also a draw for players.

“A brand new jersey, a lot of equipment, having our own soccer field house, it is growing the brand that attracts kids, just like the football program with the field house, the facilities. I think we started to do that too. I think it’s great for recruiting,” Sarkorh said.

Some of the players Sarkorh said have improved and can help the team improve include sophomore Lemuel Bautista, juniors Jonathan Gantz and Tyler Harbin and Aguilar. A few players who are new to West Brunswick have also stood out to Sarkorh, including Cole Humphries and Christian Paredes.

“I think those guys can give us a lot of positives because they’re adapting and evolving to new roles. I think they can give us that extra kick we need to compete against the schools in our conference,” Sarkorh said.

Sarkorh added the team has a core defense back, with the exception of missing senior Juan Torres who is out to start the season due to injury.

“But we have got (junior) Jonathan Gantz who we believe will control the right side and will really hold that down. In the middle we’ve got Fernando Bonifacio and Lemuel Bautista in the center of that defense to really lock down. On the left side Garrett Granade is going to be a younger guy who is going to help hold that left side down. So all-in-all our defense is going to be young but these guys are out to prove themselves. I’m really excited for the season to start so we can really show people that,” Sarkorh said.

In goal, senior Giovanni Ciprian returns to step into the first team goalkeeper role, but just as he split time with Kyle Wagner last year, Brayden Griffith will see time in goal.

“Brayden Griffith didn’t play a lot last year but he’s going to be competing with Gio for that starting keeper spot on varsity,” Sarkorh said.

Sarkorh added that even though he has a returning group, earning every starting position on the team is still a competition.

Returning to the varsity coaching staff, Sarkorh will once again have the help of Luis Aguilar. He also has a JV head coach, Antonio Tapp.

“Antonio graduated from West in 2015. So I have on my staff a lot of guys who went to West Brunswick. I think it helps embodied that Trojan spirit. Trojan Pride.

“I’m an adopted son (of West Brunswick) so having these guys helps me understand the culture and they can give the players advice from, ‘I used to play on this team and I know what it takes.’ ”

The JV team is made up of freshmen and sophomores.

“We have some talented kids there but I also believe some of them need to get an understanding of high school soccer. So our core group right now, out of the 15 players, we have about 10-12 freshmen and the rest are sophomores.”

“I think for our JV, like any JV, a lot of these guys coming in need work. That’s why they are on JV and I think it’s fair to them so they can go through the proper stage of development. But there are a lot of positive on the JV. They’ve shown some glimpses of what they can be

Sarkorh said as practice started this year everybody who returned to the team came to work.

“The guys took it upon themselves after last season, nobody wants to lose. So we’re trying to fight in a tough conference against top schools like New Hanover, who won the 4A state championship. Ashley, who made a run up there too. We’ve got Laney. We’ve got Hoggard. Even South Brunswick made the playoffs this past year. It’s a conference where six out of eight schools made the playoffs. That’s good. It shows we’re in a really tough conference and we’ve got to work to get up there,” he said.

Sarkorh said the Trojans’ style of play was established last year, so the returning players are familiar with the possession, ball control game the coach wants to see.

“We kind of set the foundation of a possession game, controlling the game. I think toward the end of the season we finally had a breakthrough. I think this year we’re still going to run off that same formula,” Sarkorh said.

“We know we need to work. We know we need to control the game. I think we have a lot of advantages in having a turf field. the ball moves a lot faster. That’s why we want to play possession and why we want to play a controlling game. We’re just building off of the game from last year. Hopefully, we’re evolving it because we have players who have evolved too. So we’re hoping for something good this year.

“Our goal for this year is simple. Let’s just win games. Let’s win more than we won last year. I think once we do that, at the end of season, wherever we place, if it’s a playoff spot, we’ll take it and we’ll go on to that. But for right now, in this season, I’d be lying to say, ‘Hey, we’re going to be a playoff team.’ We just want to win a few games and then wherever we are when the season ends, we can make judgments after that.”