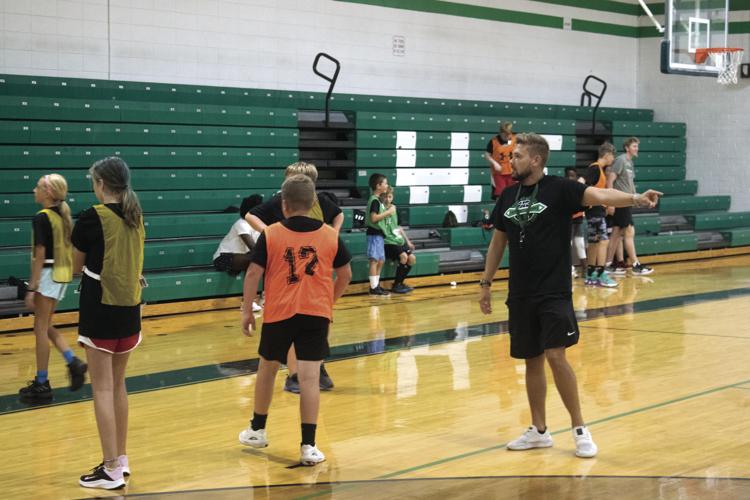 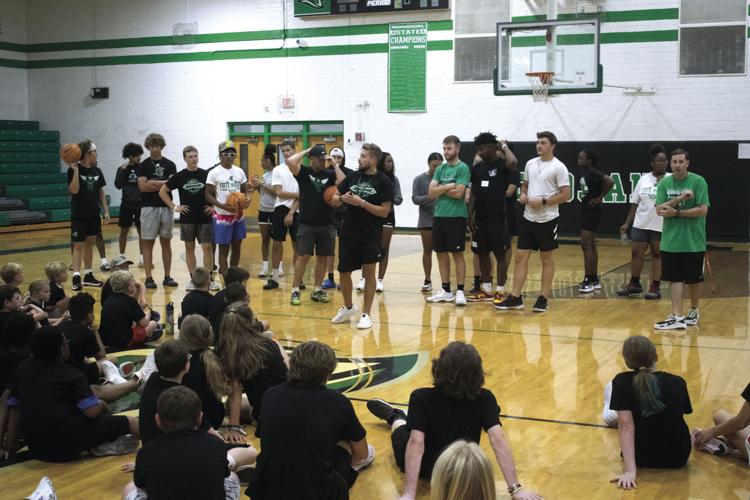 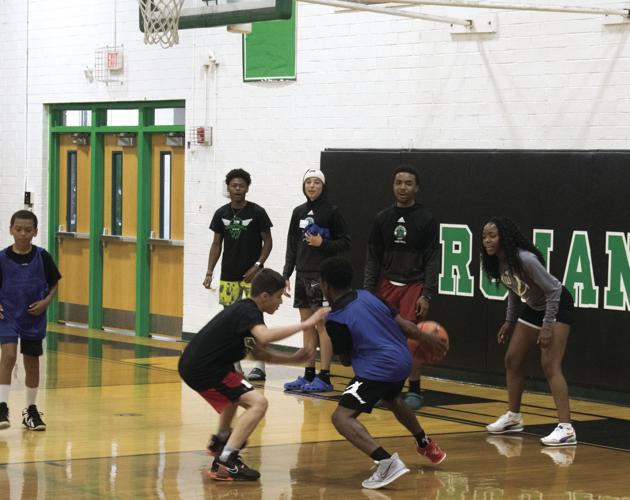 “We have had about 37 kids on a regular basis. I really want to develop all realms of what we’re trying to do. Not just basketball, but competitiveness. So one day it will be skill work, everything skill development — shooting, ball handling, defensive, whatever we’re working on. The next day would be what we call a ‘team day.’ it’s what a regular practice would look like, in season. We do a lot of working on our offensive sets, our press work, stuff like that. The third day is competition day. So it’s one-on-ones, two-on-twos, three-on-three, just learning how to get after it. Learning how to play. Learning how to win,” Taylor said.

So we just kind of go from skill day to team day, to competitions. Skill-team-competition. It keeps their minds fresh and it’s not the same monotonous thing every single day.”

Taylor has nine players returning to the varsity and a host of young players.

“I have nine returning seniors. I’ve got a junior transferring from the Christian Academy. I probably have five or six sophomores coming up this year. Three or four juniors coming up, sophomores last year. And then I have 15 incoming freshmen. A great group of freshmen, great group of kids,” Taylor said.

“But our nine returning seniors, those are kind of our glue guys. Guys like J.J. Cobb, Jordan McCall, Kevon Daniels, Carson Polk, Quincy Hankins, those kinds of guys. I’m going into my fourth year. So these guys who are seniors, my first year they were all freshmen.”

“We’ve been going hard for about three weeks. As hard as we could go with zero days off,” Taylor said.

“We went to Coastal Carolina team camp. We went there for two days. We did pretty well there. We went 3-3 there without our full roster. We had a jamboree here against Trask and South and went 2-0 against Trask and South. We went to the Fred Lynch Invitational and had a really good showing at the Fred Lynch Invitational. I took them to a kind of leadership academy at Fort Fisher at Carolina Beach. It was kind of just like, who’s going to quit and who’s not. It was kind of a mental toughness kind of camp, no basketball involved at all.

While Holland lost a core group of players, he said there was a lot of interest and turnout during the summer.

“We started the week after school got out. We’ve got about 25 kids that have been contacted. We’ve been averaging 12 to 14 per workout. I’ve seen a total of about 20 kids,” Holland said.

“They’re definitely young, out of the kids that are showing up, I’ve got four returners from last year. Three or four JV kids from last year have been showing up consistently. There’s been six or seven freshmen, incoming freshmen that have shown up. So it’s kind of a mix. We’re going to be young. I lost seven seniors, so there’s no way around not being young.

“I think I have a pretty good idea of what we’re going to be working with. I think the thing is going to be if anybody new comes in, figuring out how to blend that in. We’re guard heavy. And we don’t have a lot of size. But I think we can handle the ball pretty well. We’ve been getting a lot of shots up lately trying to get a little better. We’ve got some good shooters. (We had) pretty good shooters last year, we need to improve on that. So we’ve been working on that.”

Holland said the summer workouts worked on fundamentals and seeing where the young players fit.

Building chemistry was also part of the summer work for the girls’ teams.

“Fundamentals, and chemistry. We went bowling the other night, took the whole group out bowling just to go out, get outside of the gym, and try to have some fun together. Especially, with so many young kids coming in, they don’t know each other, the older kids don’t know the younger kids. Just trying to get them together,” Holland said.

Both coaches said one area their team workouts are becoming more involved in is getting into the weight room, which began in the spring following the end of the season.

Taylor said most of his players have weight training both semesters in school, whether or not they are multi-sport athletes.

“Oh, yeah. Every single one. That’s why all these kids have gotten so much bigger,” Taylor said.

“Coach (Leslie) Reeves runs a spring weight training program for me. If they’re not in track, then they’re in the weight room. So they’re getting a workout in 12 months out of the year. Football will be going in July and half my kids play football too.”

Holland added the weight room has to become more of a part of the program.

“It has to be. I mean, if you’re not doing it, you’re going to be behind. It’s got to be. I think it’s harder with a lot of girls. Guys see it as an expectation. It’s more of a culture change for a lot of the girls. It shouldn’t be, but that’s changing. Like I said, we had several girls who did the after school program in the spring. There were several girls in there. And we’re trying to encourage girls to even take the weightlifting classes here. So it’s changing, but like I said, it’s always been much more of an expectation for guys and not so much for girls. You have to build it up so they know it’s kind of an expectation for them too,” Holland said.

“I’m pretty pleased with the buy-in. and I think that they realize what it takes to be good now. And the ones who want to

be good, they are there. It takes that in high school sports now. You know, people don’t know how good high school players are and how much time these kids are spending. They’re spending hours and hours, and part of that time is in the weight room. It’s good. I’m not unhappy with the number of girls that we’ve had working out.”

The players and coaches wrapped up the summer workouts by helping out with a two-day, all-ages kids’ basketball camp.

“This camp is always built into our summer schedule. We tell our kids if they’re going to vacation, vacation in July, because we’re 27 days out of 30 in the month of June. So this is always built into it. And they’re always excited because they went to camp when they were younger. And this is something that they looked up to when they were little.

Taylor said while he and Holland make the preparations for the camp, the players take over running it.

“This camp wraps up our month. We worked out through June. I’m probably going to plan a couple of little get-togethers the last week or two in July. But usually in July, AAU season really picks up and girls who are playing volleyball, they are heading right into the volleyball season. So I usually start backing off a little bit in July,” Holland said.

“They need a break too. I’ve got several girls who have been showing up in the gym that have played two or three sports through the year. Everybody needs a little bit of rest sometimes.”