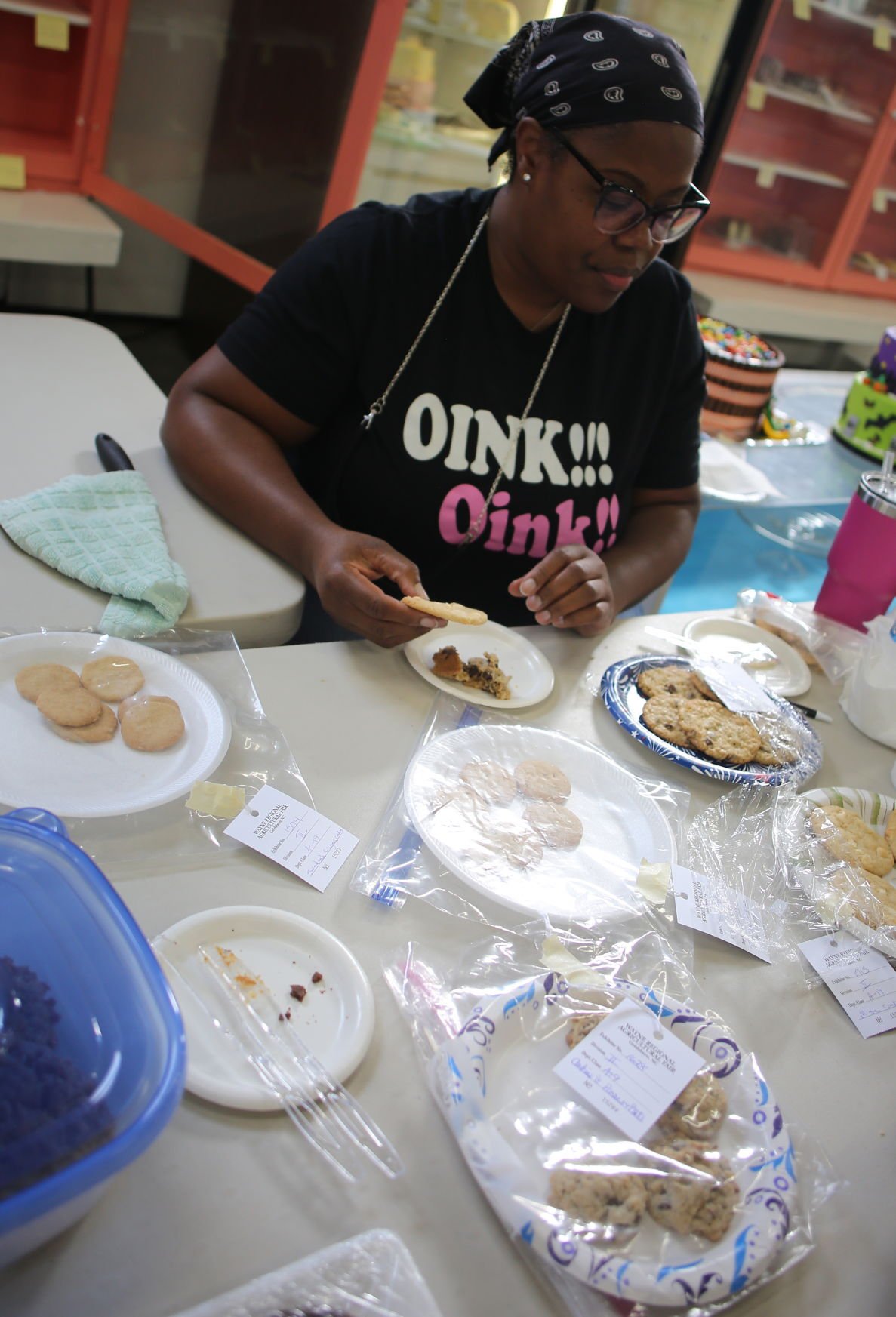 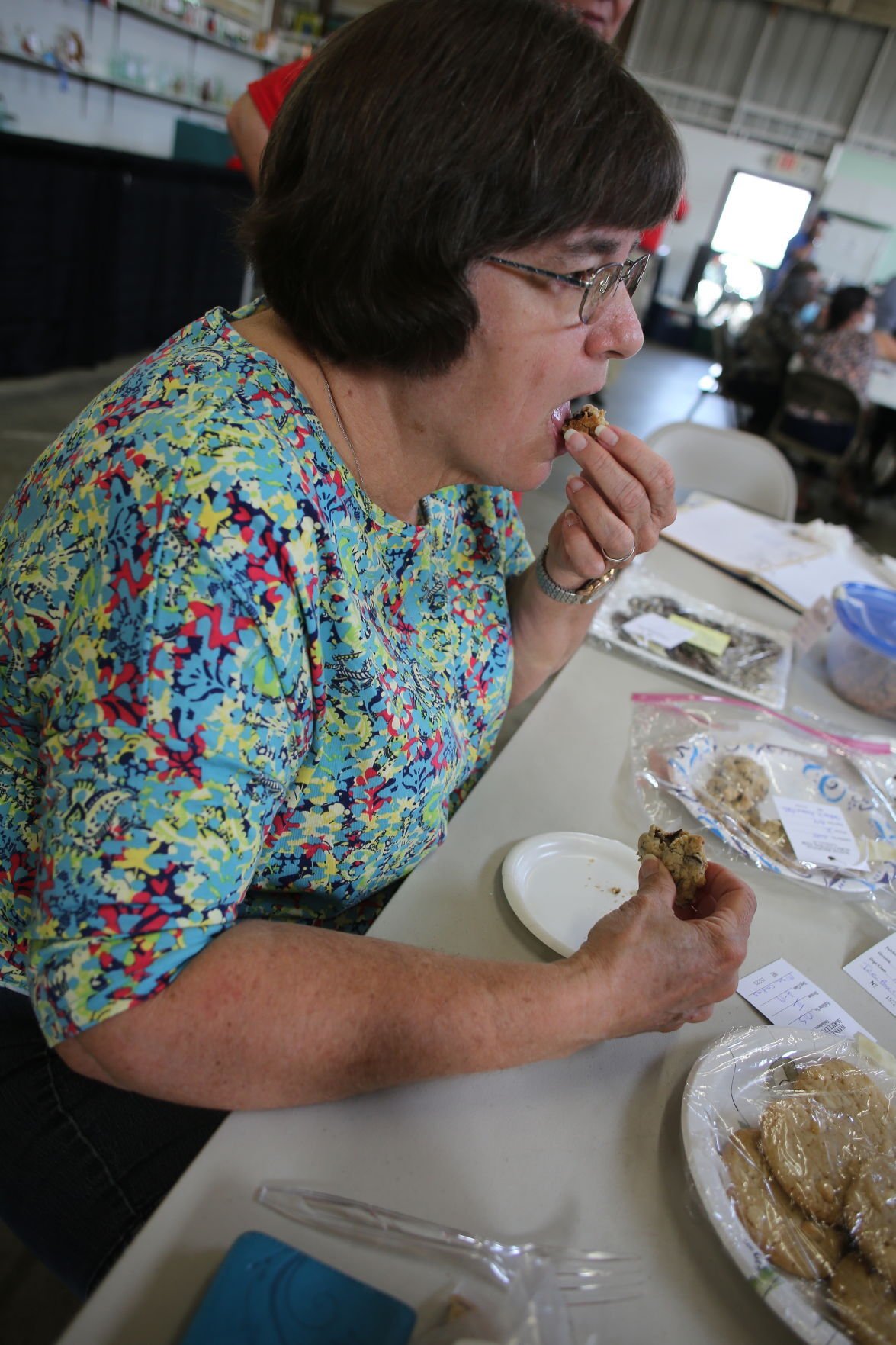 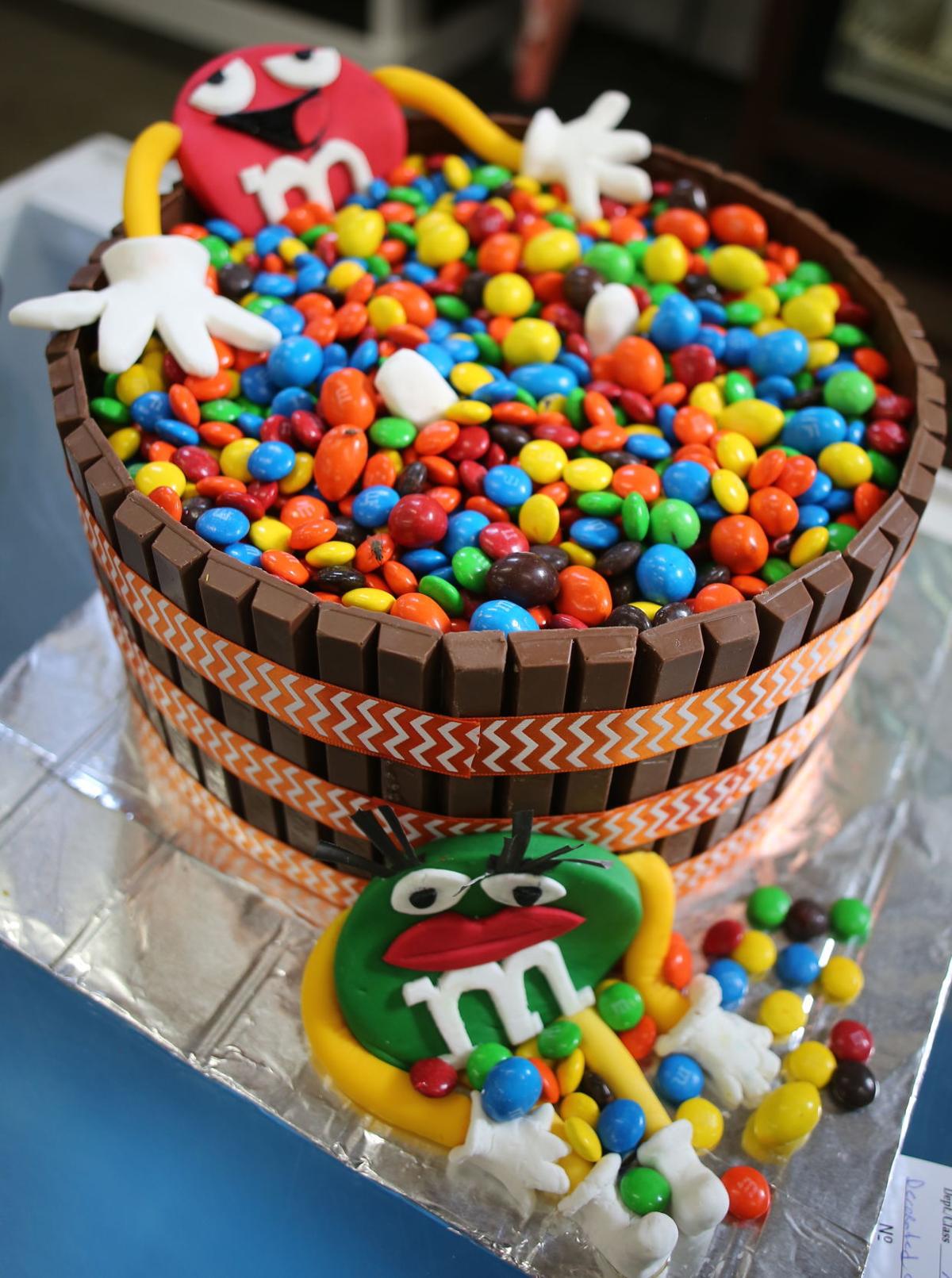 One of the decorated cake entries this year was an M&Ms cake. 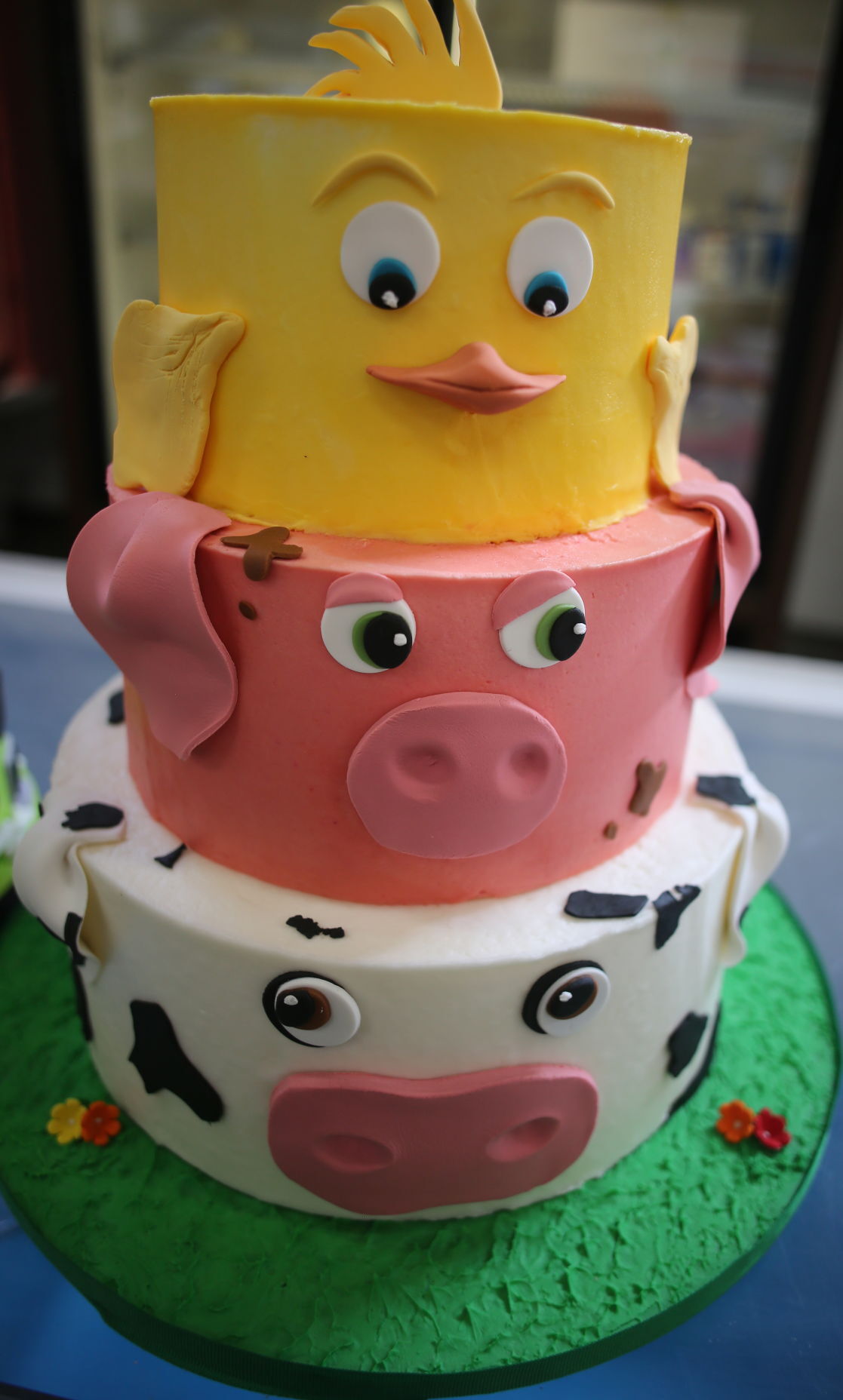 Another entry in the decorated cake category had a cow’s head, a pig’s head and a chicken’s head. 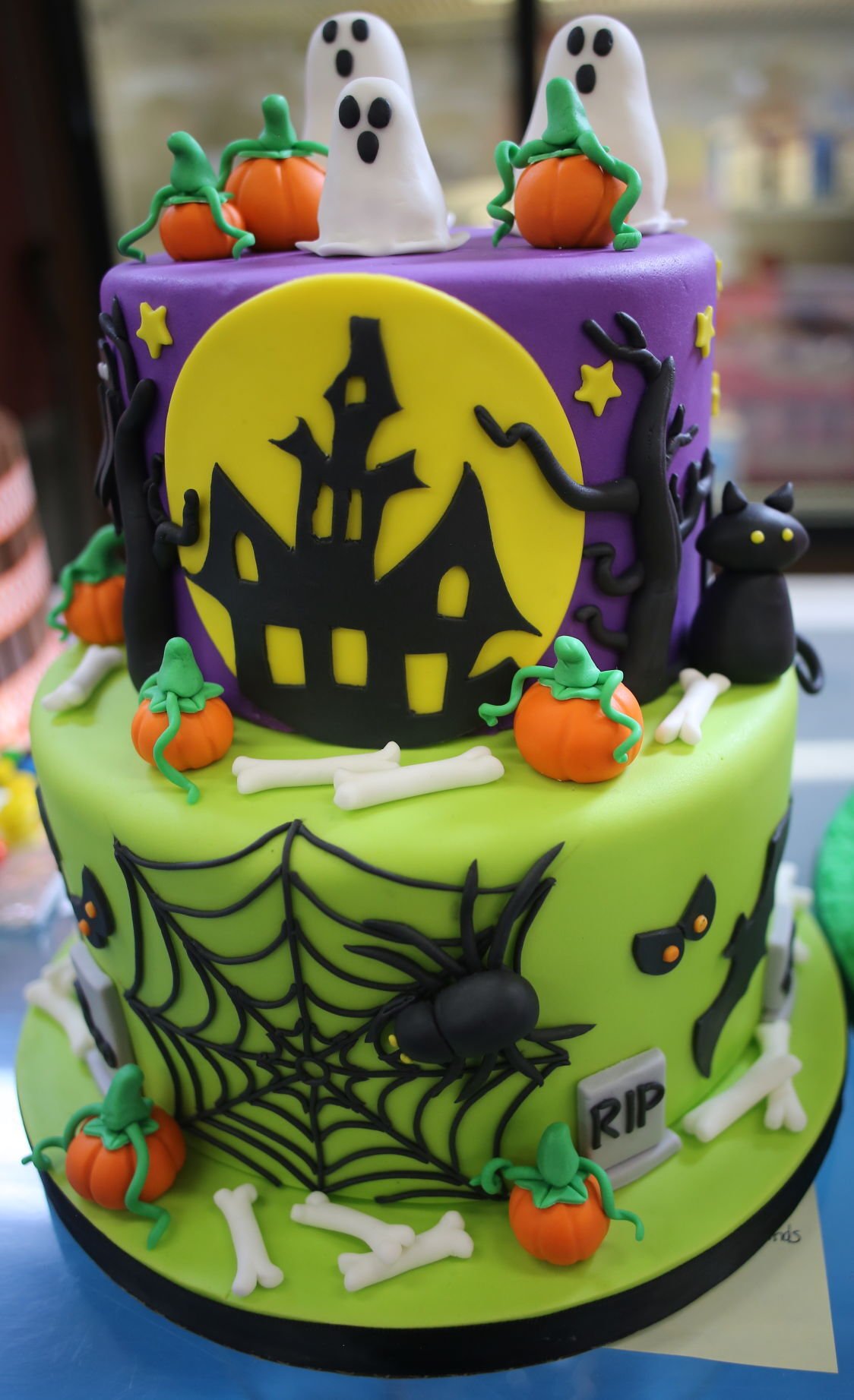 This Halloween cake was entered into the prepared foods competition at the fair. 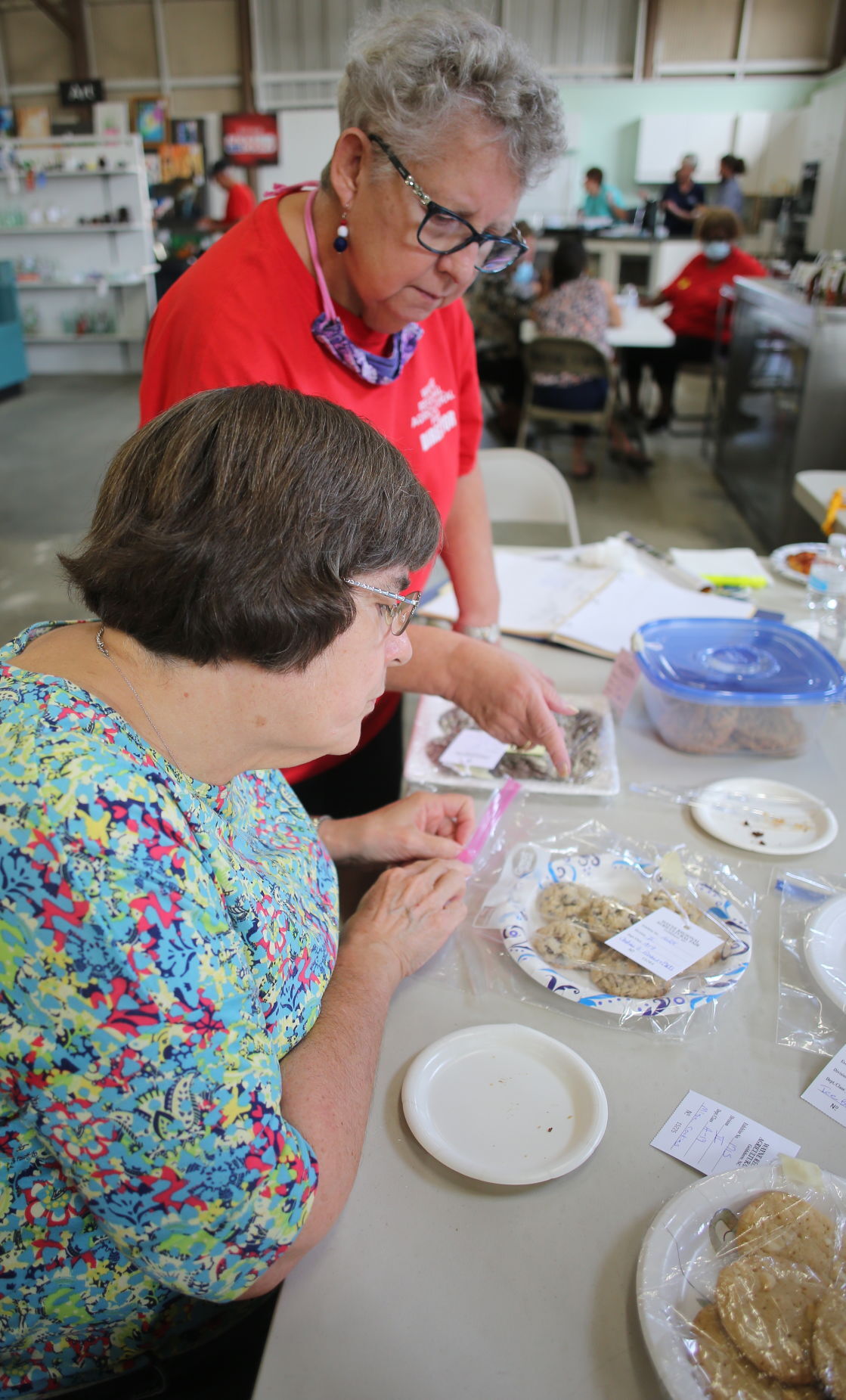 One of the decorated cake entries this year was an M&Ms cake.

Another entry in the decorated cake category had a cow’s head, a pig’s head and a chicken’s head.

This Halloween cake was entered into the prepared foods competition at the fair.

Photos and story by BECKY BARCLAY

The smells of freshly-baked cookies, pretty candies, scrumptious breads, biscuits and more filled the air at the prepared foods competition area of the fairgrounds.

The competition was held recently at the Wayne Regional Agricultural Fair.

Judging wasn’t easy, according to Brenda Ingram and LaTanya Johnson, who had the task of tasting the 96 entries this year.

“We’ve had a lot of good things,” Ingram said. “We’ve had some things that were very interesting.”

Ingram, who’s a retired home economics teacher, said eating all those sweets was hard, but she managed to slip some crackers and water in between the categories.

Johnson said she was excited to try the cookies and cakes.

After making it through everything but the cakes, she, too, was on a sugar high. Johnson bakes full time for her business, Pink Piggy Sweets.

“Appearance is major to me because a lot of people don’t put their fork into it if they don’t like it with their eyes,” she said.

One of the prepared foods directors, Cathy Green, said there have been some different items come in during past years. And there were about half as many items in this year’s competition as there were two years ago, the last time the fair was held.

“We thought since they didn’t have the fair last year, there would have been more entries this year,” Green said. “But a lot of people are still scared of COVID. A lot of folks that do a lot of cooking, the old-fashioned homemade cooking, they don’t want to get out in the crowds because of their age or maybe their health issues.”

Items that were entered came from a varied age group ranging from 18 to 93, she said. And several men entered foods this year — and won blue ribbons.

“In a lot of households now, with the wife and the husband working, it’s hard for them,” Green said. “Some ladies work late hours. And men do, too. I think they have agreements as to who cooks and what to cook.”

Green said the judges were looking for taste, first of all, then texture, appearance and how it smelled, all the senses.

“We have breads; cookies; candies; layer cakes; the tube, loaf and sheet cakes; small cakes such as cupcakes or a cake six inches in the round,” she said.

“Then we have an interesting part for decorative cakes and pastries, large and small. They can use Styrofoam (for the cake) and use their talent for decorating.”

There were three decorated cakes this year. One had a Halloween theme. Another featured three layers, one a cow’s face, another a pig’s face and the third a chicken’s face. There was also an M&Ms cake using the candies and Kit Kat candy bars.

“One of the most interesting things that we saw two years ago, because basically everything you see now is what you’ve seen before, this young lady came in with a decorative Styrofoam cake that was decorated like all the types of food that you would get at a movie theater,” Green said.

“She had the cup with soda in it, popcorn, nacho cheese, hot dog and candies. And she did it all using a frosting like marzipan. It was beautiful, but it weighed a ton. She had three people helping her bring it in. It won her being a first-time contestant, first place and Best of Show.”

Green said her mother used to enter a lot of thing in the prepared foods contest at the fair back in the 1960s, 70s and 80s.

“This just brings back memories,” she said. “I used to help her.”