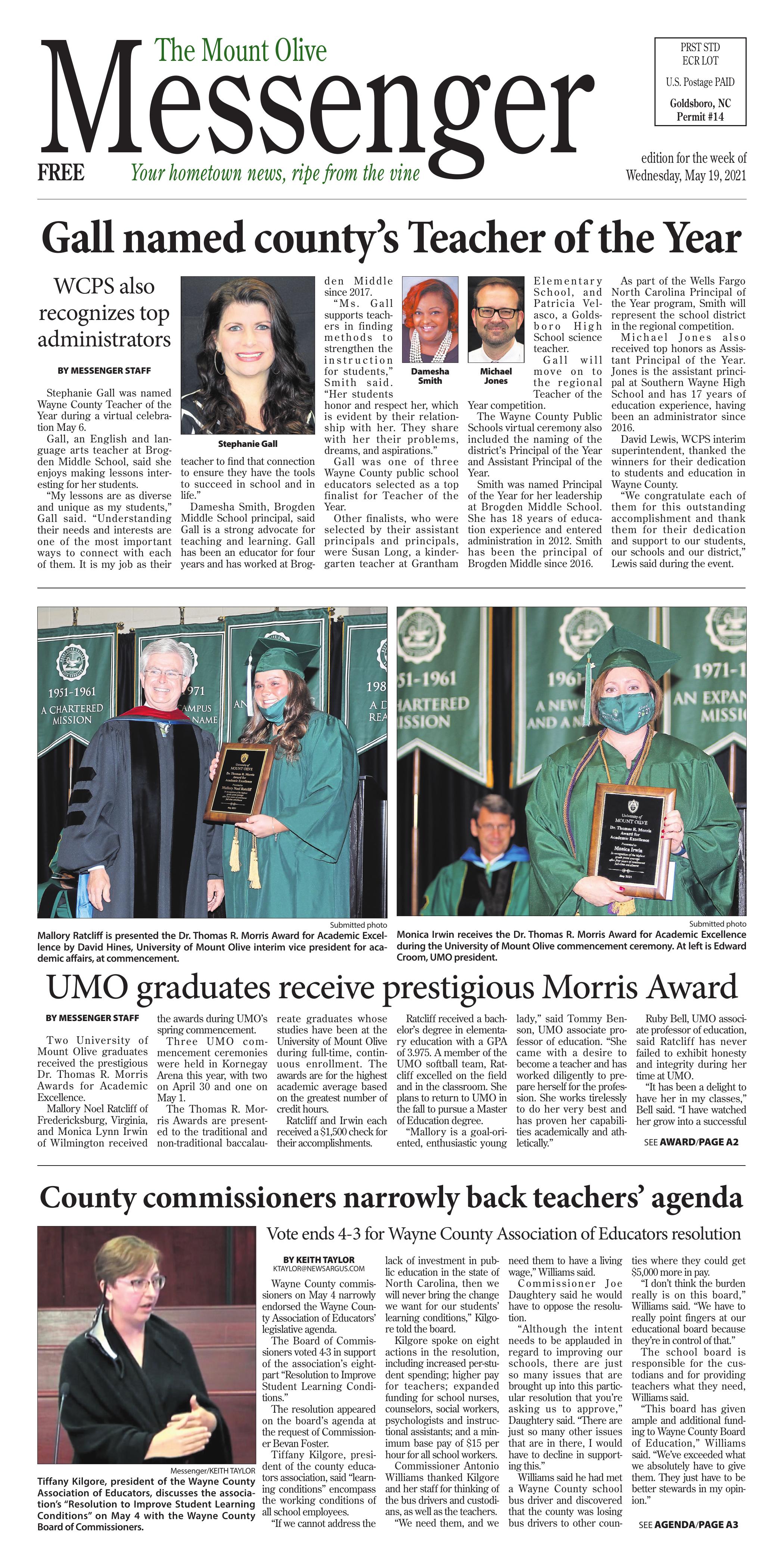 Stephanie Gall was named Wayne County Teacher of the Year during a virtual celebration May 6.

Gall, an English and language arts teacher at Brogden Middle School, said she enjoys making lessons interesting for her students.

“My lessons are as diverse and unique as my students,” Gall said. “Understanding their needs and interests are one of the most important ways to connect with each of them. It is my job as their teacher to find that connection to ensure they have the tools to succeed in school and in life.”

Damesha Smith, Brogden Middle School principal, said Gall is a strong advocate for teaching and learning. Gall has been an educator for four years and has worked at Brogden Middle since 2017.

“Ms. Gall supports teachers in finding methods to strengthen the instruction for students,” Smith said. “Her students honor and respect her, which is evident by their relationship with her. They share with her their problems, dreams, and aspirations.”

Gall was one of three Wayne County public school educators selected as a top finalist for Teacher of the Year.

Other finalists, who were selected by their assistant principals and principals, were Susan Long, a kindergarten teacher at Grantham Elementary School, and Patricia Velasco, a Goldsboro High School science teacher.

Gall will move on to the regional Teacher of the Year competition.

Smith was named Principal of the Year for her leadership at Brogden Middle School. She has 18 years of education experience and entered administration in 2012. Smith has been the principal of Brogden Middle since 2016.

As part of the Wells Fargo North Carolina Principal of the Year program, Smith will represent the school district in the regional competition.

Michael Jones also received top honors as Assistant Principal of the Year. Jones is the assistant principal at Southern Wayne High School and has 17 years of education experience, having been an administrator since 2016.

David Lewis, WCPS interim superintendent, thanked the winners for their dedication to students and education in Wayne County.

“We congratulate each of them for this outstanding accomplishment and thank them for their dedication and support to our students, our schools and our district,” Lewis said during the event.

Three UMO commencement ceremonies were held in Kornegay Arena this year, with two on April 30 and one on May 1.

The Thomas R. Morris Awards are presented to the traditional and non-traditional baccalaureate graduates whose studies have been at the University of Mount Olive during full-time, continuous enrollment. The awards are for the highest academic average based on the greatest number of credit hours.

Ratcliff and Irwin each received a $1,500 check for their accomplishments.

Ratcliff received a bachelor’s degree in elementary education with a GPA of 3.975. A member of the UMO softball team, Ratcliff excelled on the field and in the classroom. She plans to return to UMO in the fall to pursue a Master of Education degree.

“Mallory is a goal-oriented, enthusiastic young lady,” said Tommy Benson, UMO associate professor of education. “She came with a desire to become a teacher and has worked diligently to prepare herself for the profession. She works tirelessly to do her very best and has proven her capabilities academically and athletically.”

Ruby Bell, UMO associate professor of education, said Ratcliff has never failed to exhibit honesty and integrity during her time at UMO.

“It has been a delight to have her in my classes,” Bell said. “I have watched her grow into a successful teacher intern, and it has been my pleasure. I am positive she will make an excellent teacher leader.”

Irwin received a bachelor’s degree in business administration, with a focus on human resource management, with a GPA of 3.975.

Her future plans include developing a human resource program for expanding the business she started with her husband, Bill. Originally from Maine, the Irwins moved to Wilmington in 2019 and opened a restaurant, The Maine Lobster Roll Co.

“Monica has demonstrated herself to be professional and capable,” said Ryan Douglas, UMO assistant professor of finance. “She knows how to execute, communicate and provide a quality product. She has been a pleasure to have in class and embodies the ideal character of a UMO alumni.”

Benefactor of the Morris Award is the late Thomas R. Morris, a native of Nahunta in Wayne County. Morris was raised in the Union Grove Original Free Will Baptist Church.

The award is given by Dr. Thomas R. Morris because of his desire to advance the educational and spiritual quality of persons entering the Christian ministry.

UMO is a private institution rooted in the liberal arts tradition with defining Christian values. The university is sponsored by the Convention of Original Free Will Baptists.

The Board of Commissioners voted 4-3 in support of the association’s eight-part “Resolution to Improve Student Learning Conditions.”

The resolution appeared on the board’s agenda at the request of Commissioner Bevan Foster.

“If we cannot address the lack of investment in public education in the state of North Carolina, then we will never bring the change we want for our students’ learning conditions,” Kilgore told the board.

Kilgore spoke on eight actions in the resolution, including increased per-student spending; higher pay for teachers; expanded funding for school nurses, counselors, social workers, psychologists and instructional assistants; and a minimum base pay of $15 per hour for all school workers.

Commissioner Antonio Williams thanked Kilgore and her staff for thinking of the bus drivers and custodians, as well as the teachers.

“We need them, and we need them to have a living wage,” Williams said.

Commissioner Joe Daughtery said he would have to oppose the resolution.

Williams said he had met a Wayne County school bus driver and discovered that the county was losing bus drivers to other counties where they could get $5,000 more in pay.

“I don’t think the burden really is on this board,” Williams said. “We have to really point fingers at our educational board because they’re in control of that.”

The school board is responsible for the custodians and for providing teachers what they need, Williams said.

“This board has given ample and additional funding to Wayne County Board of Education,” Williams said. “We’ve exceeded what we absolutely have to give them. They just have to be better stewards in my opinion.”

Reinvestment in Wayne County public schools is necessary because the students deserve access to the fundamentals, Kilgore said.

Williams made a motion to support the resolution.

“Is it perfect? No,” he said. “However, it will give the legislators an opportunity to see if they strongly are concerned about our community.”

Foster said the resolution was just a way of expressing support for teachers and school staff.

“I’ve seen a couple of resolutions that we have absolutely nothing to do with or any control over, but we vote for them,” Foster said. “I’ve seen it on the city level. I’ve seen it on the county level. It’s just showing support for those. We can’t say that the legislators are going to do anything or do any of this, and I think that’s on them, but right now it’s just showing support for the teachers here, showing that we stand behind them.”

Commissioner Barbara Aycock asked whether the Association of Educators had presented its resolution to the Wayne County Board of Education. Kilgore said the resolution would be presented to the school board next month.

“I want you to think of this like a wish list, this is what you wish our students would have in Wayne County,” Kilgore said.

“It’s not a wish list,” Daughtery said. “This is a written document with specific items in it, and as such you’re asking this board to agree to everything that’s in this document by supporting it, and so it’s not just a wish list.

“I understand there are great needs there, but you’re asking us to endorse what you have in written form here, and I can’t agree to all these items. Some of them I understand the need of, but I can’t agree to some of these things, of extending health benefits, as an example, or raises for retirees, and so forth. The legislature is the one that determines who is going to get health benefits as of January 1st, we don’t.”

Kilgore said she understood Daughtery’s point, “but the point that I’m making is that you are the leaders of our community, you’re the leaders that represent these individuals, and that you should be fighting for their rights as well and pushing our legislature, to say I need you to support the staff and the students and our families and communities in Wayne County, and the way to do that is reinvest in public education, particularly addressing these items.”

Foster said the Association of Educators was merely asking for a show of support for teachers, students and families.

“It’s just a simple agreement,” Foster said. “We’re saying, hey, we support them, we support the educators of Wayne County, here you go. Our legislators, it’s on them what they do from that point on.”