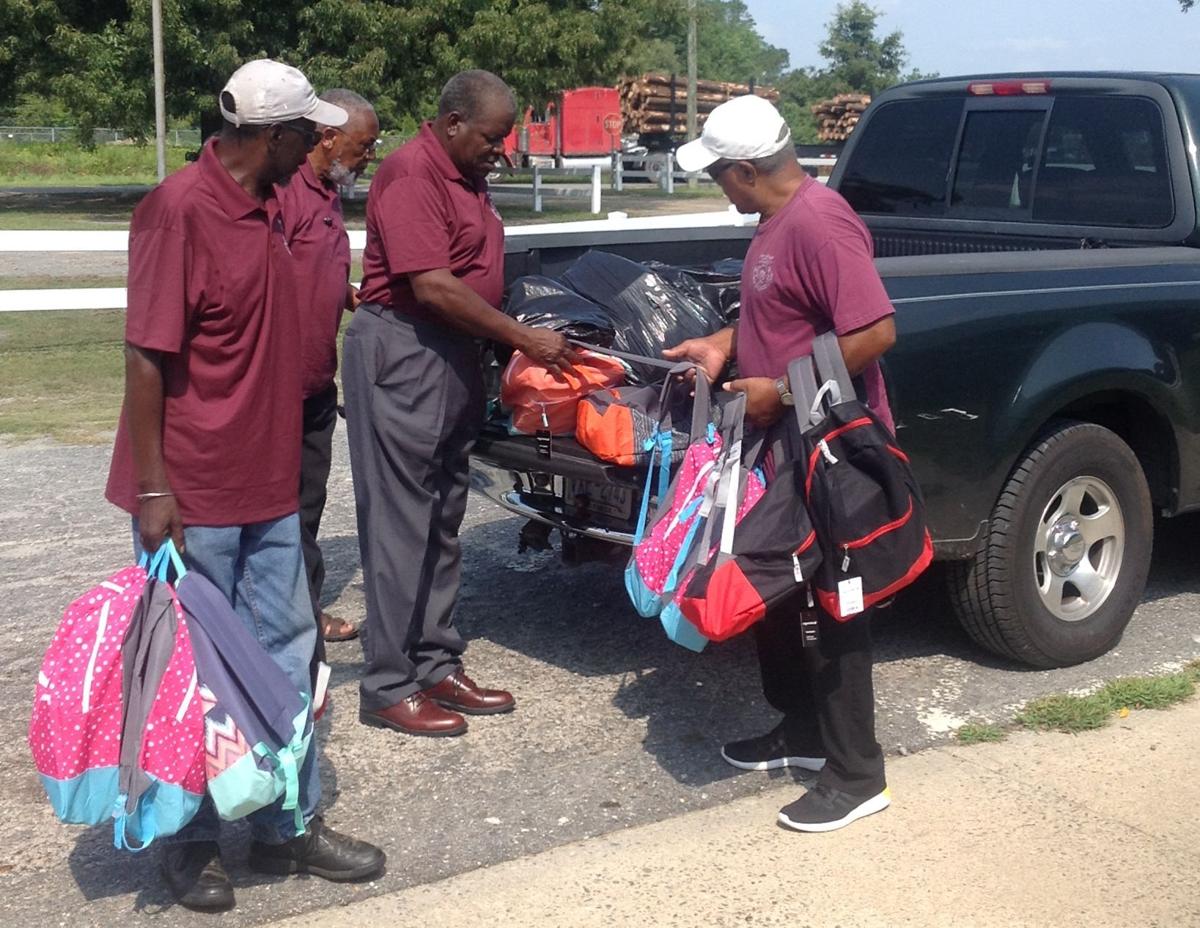 Men of Faith, Integrity and Character members, from left, Dewey Armwood, Charlie Holloway, Sam Platt and Vernon Lee deliver book bags to local schools. The men are getting back out into the community to do charitable causes after just making monetary donations during the pandemic. 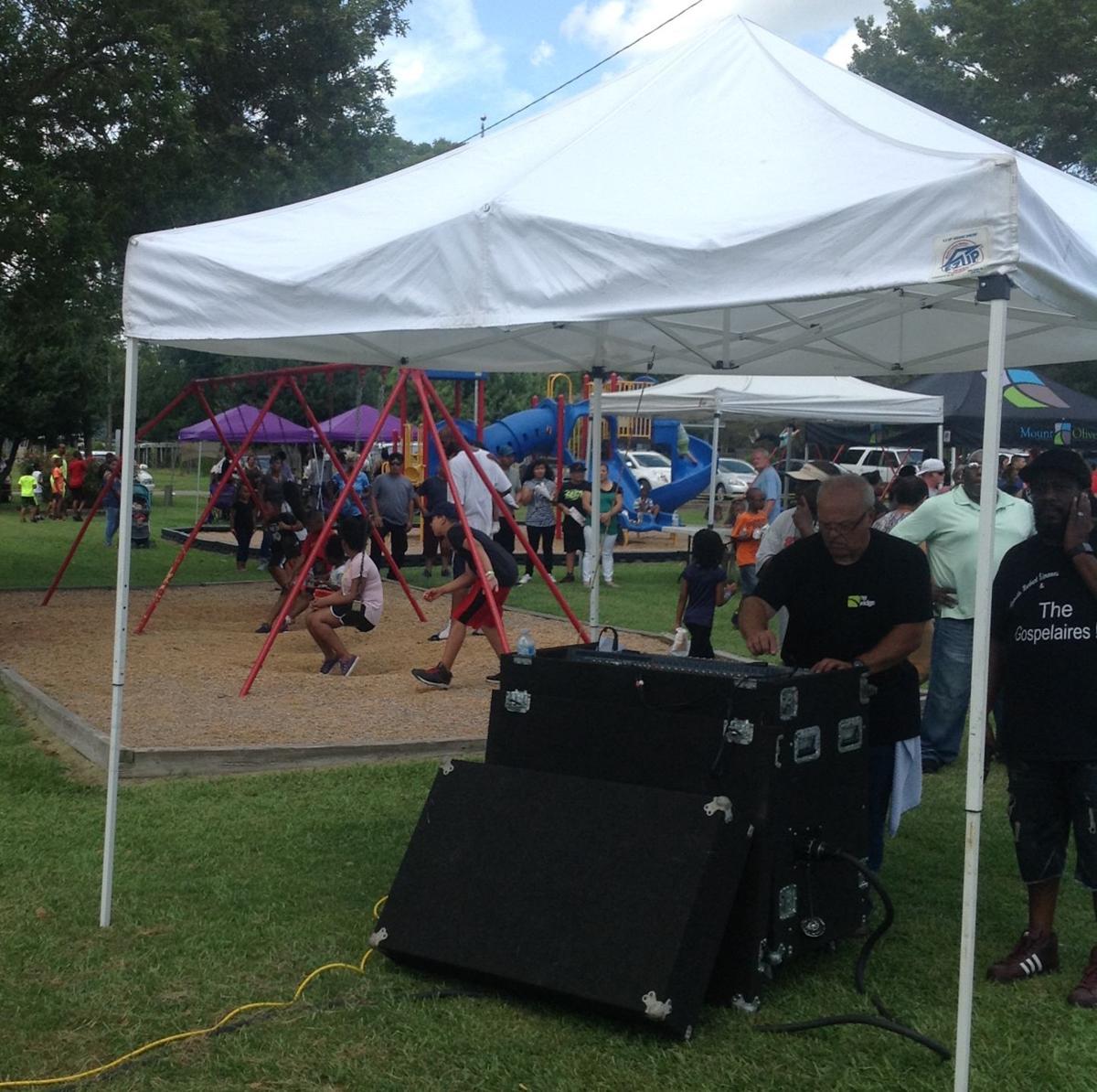 Men of FIC hosts a past back-to-school celebration at Nelson Park in Mount Olive. 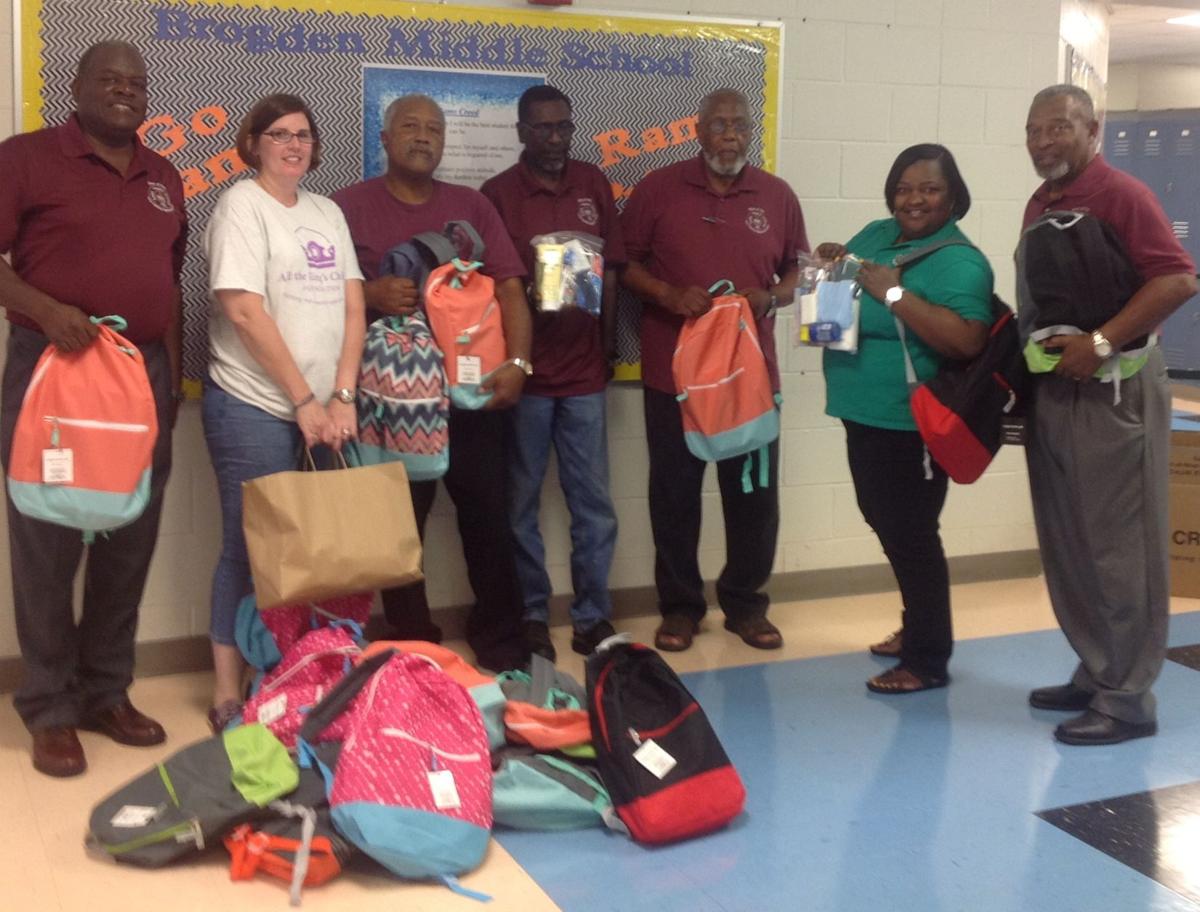 One of the projects Men of FIC does is delivering book bags and hygiene items to area schools. From left are Sam Platt; Marcia Whitley with All the King’s Children; Vernon Lee, Dewey Armwood and Charlie Holloway; Damesha Smith, principal of Brogden Middle School; and Al Southerland.

Men of Faith, Integrity and Character members, from left, Dewey Armwood, Charlie Holloway, Sam Platt and Vernon Lee deliver book bags to local schools. The men are getting back out into the community to do charitable causes after just making monetary donations during the pandemic.

Men of FIC hosts a past back-to-school celebration at Nelson Park in Mount Olive.

One of the projects Men of FIC does is delivering book bags and hygiene items to area schools. From left are Sam Platt; Marcia Whitley with All the King’s Children; Vernon Lee, Dewey Armwood and Charlie Holloway; Damesha Smith, principal of Brogden Middle School; and Al Southerland.

From its start, Men of Faith, Integrity and Character has been all about improving the lives of others.

The nonprofit, which formed in January 2011 in Mount Olive, tries to help others in any way it can.

Men of FIC has its roots in a program that Northeast Chapel Original Free Will Baptist Church in Mount Olive had in October 2010 — the 100 Men in Black program — that worked to get men together to do good work in the community.

It started out with about 15 members, and today has grown to 25 members, Southerland said.

“A lot of times, our young boys the only thing they see is women working. Many grow up with just a mother or grandmother in the house. They go to school and the teacher is a female, and thank God for the women. We just saw a need in the community that we could help.”

Southerland said any need that comes to the group’s attention, its members try to help with. And if they can’t do it themselves, they find a nonprofit that can help.

Members addressed the need for young boys to have good role models by forming the Young Men of FIC group in 2015, Southerland said. The group is open to youths ages 8 through 17. Each is sponsored by a Men of FIC member. Once a young man turns 18, he can join Men of FIC if he wants to, but is not pressured to join.

Young Men of FIC members help their parent group in any way they can.

Southerland said Men of FIC doesn’t solicit members for either group, but instead hopes young men will approach the group when they see members doing good works out in the community.

“We only have two requirements for members — you desire to help us do the things we do in the community, and you don’t do anything that brings disgrace upon the organization,” he said.

Men of FIC was meeting regularly before the pandemic hit in 2020. Then, members began helping other nonprofits with monetary donations.

Its members are now ready to get back out in the community and do good things once more.

One of those charitable efforts is helping another nonprofit, Helping Hands Ministry in Mount Olive, by giving monetary donations and delivering food baskets around the holidays.

“And any month that has a fifth Saturday in it, we prepare and deliver the meals for Helping Hands,” Southerland said.

“We’ve had people to call and say they just moved into a house and don’t have any furniture. We’ve donated to that. During the pandemic, there was this one person, and she couldn’t fully pay all of her rent, so we assisted with that. Just anything that we see, we try to help out.”

Currently, members are working on one of their big yearly projects, a book bag drive and back-to-school celebration for children, which the group started in 2011.

“We know that there’s a lot of people out there that they send their kids to school not prepared,” Southerland said. “Also, we use it as a celebration, where we get them together and have some fun times and a speaker to talk to them about going to school and being prepared.

“We help prepare them by giving them a book bag and supplies. Almost everything that they need to start school off right is in that book bag.”

Southerland said other groups partner with Men of FIC to make the event happen. Some donate money for book bags and school supplies, while others help out at the event.

“It’s just a blessing,” he said. “We just have a big celebration.”

He said in addition to getting a book bag with school supplies in it, children are also treated to free food and games. There are even games for the adults who come with the children. Performances include various singing groups and mimes. Men of FIC also gives out gift cards at the event.

Southerland said the event is open to children in kindergarten through eighth grade.

This year, the celebration is planned on Aug. 21 at Nelson Street Park in Mount Olive, with times to be announced at a later date.

“It makes me feel good because kids are getting their stuff, and they want to dig into it right away,” Southerland said. “They run to mama with their book bag. It gets them excited.

“You got a kid that maybe has gone to school the first day without that book bag and other kids have things. How’s that going make them feel? So we want them to start out right. When you make somebody else happy, it makes you happy.”

Another big project each year is a health fair, complete with free health screenings, healthy food samples and more.

“We’ve been giving out two bicycles trying to get people to exercise,” Southerland said. “All the vendors that come to talk about health issues are required to bring a gift to be raffled off. Everything’s free.

“One year we had an individual come and their blood pressure was up high and we had to call rescue to come and get this person.”

Southerland said that might have saved the person’s life.

The health fair is normally in May, but wasn’t held this year.

Another big event is the group’s annual anniversary celebration, the Togetherness Banquet.

Southerland said in addition to charitable work, Men of FIC is also about fellowship. He said the men get together for fish stews, fish frys, chicken dinners and more to eat, laugh and talk about what they’re going to do next.