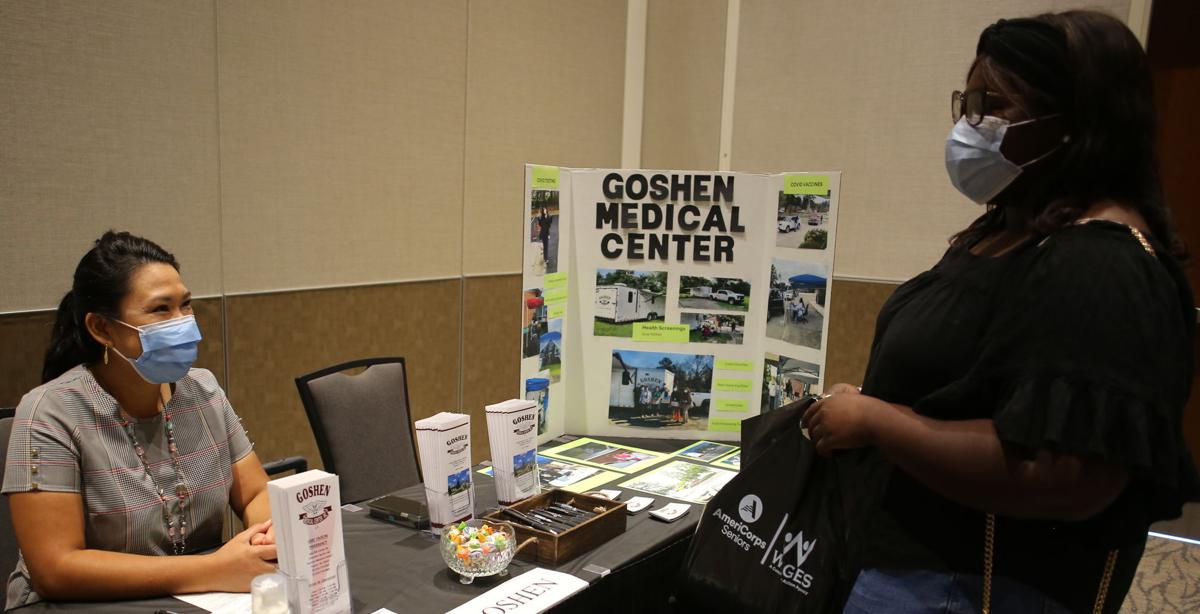 Mickayla Wooten, right, gets some information from Arlin Montalvo, outreach coordinator with Goshen Medical Center, about volunteer opportunities Aug. 31 at the United Way volunteer fair at the Maxwell Center. 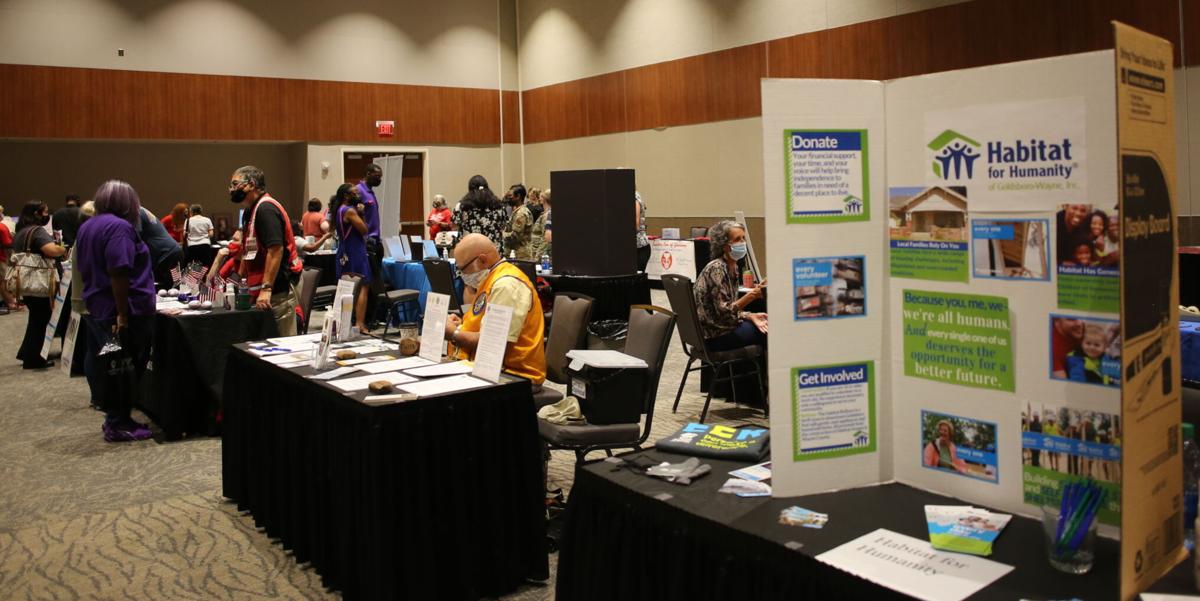 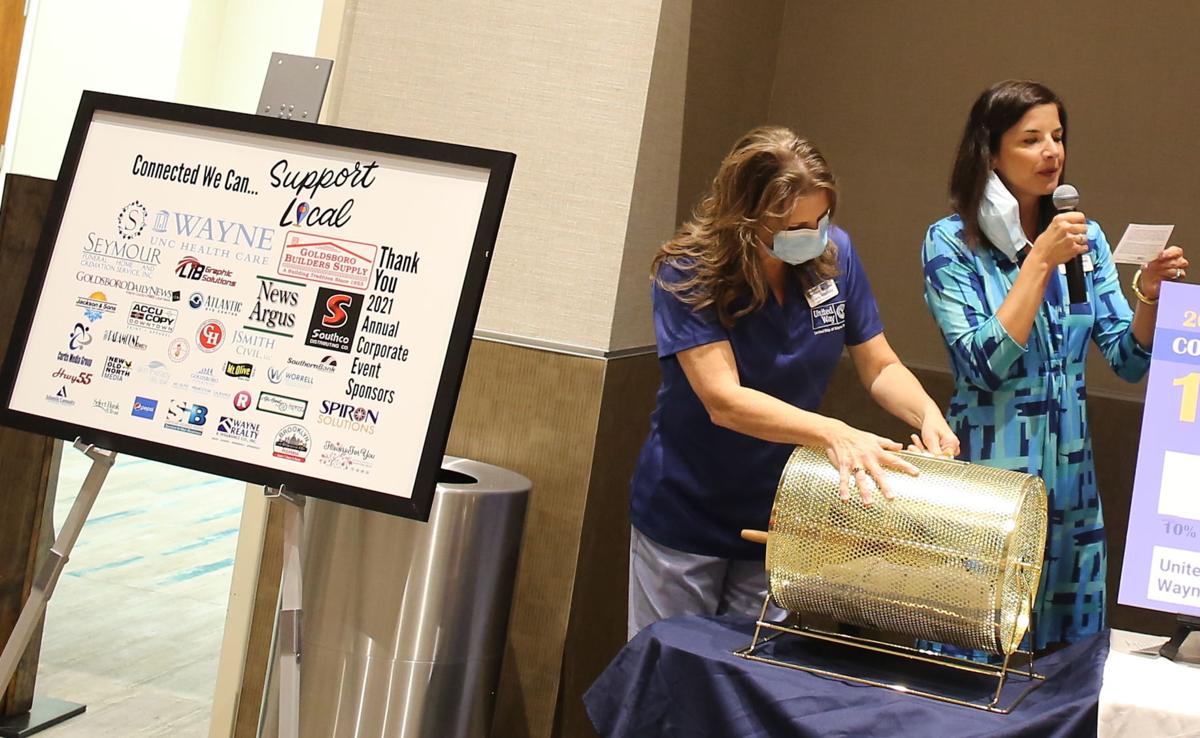 Mickayla Wooten, right, gets some information from Arlin Montalvo, outreach coordinator with Goshen Medical Center, about volunteer opportunities Aug. 31 at the United Way volunteer fair at the Maxwell Center.

During United Way of Wayne County’s kickoff and volunteer fair Aug. 31 at the Maxwell Center, campaign chairman Bethany Perry announced that the frontrunners campaign has raised about 30% of this year’s $850,000 goal.

“Our frontrunners are basically investors that decide to host their campaign early,” said Ashlee Fritz, United Way resource development director. “They set the standards for our campaign. And they not only inspire other investors to participate in the campaign, but also get us just that much closer to our goals. They are leading the pack basically.”

This year’s 25 frontrunners include groups such as Mount Olive Builders, Wayne Realty, Boys and Girls Clubs and Anchor Coupling.

Fair share givers are those who pledge an hour’s pay per month for a year if they’re hourly or 0.6% a year for salaried employees.

One lucky winner will take home $10,000 in cash, which was given by an anonymous donor just for the fair share drawing, Fritz said.

The winner will be announced after the final drawing in December, after the campaign ends.

United Way’s partner programs were at the volunteer fair with informational booths.

Mickayla Wooten was looking for some volunteer opportunities for her and her sister.

“My sister’s in high school, and I’m looking for some things she can get into,” Wooten said.

She said she saw a lot of things that piqued her interest.

“I think the volunteer fair is really going to be helpful for the community,” Wooten said.

“With COVID last year, we weren’t able to get into all the major investors who host employee campaigns,” she said. “We had to do a lot through Zoom.

“Just not having that face-to-face interaction wasn’t as effective as an in-person presentation.”

This year, United Way staff is trying some new things.

“To make our campaign presentations a little more interactive and lively, we’ve created a trivia game,” Fritz said. “We challenge the audience with knowledge about United Way and our partners and what exactly we do in our community.

“We’ll give out some fun prizes. It’s a really interactive way for us to engage with the audience we’re speaking to. It helps engage them a little bit more, and they pay a little bit closer attention to the information given, as well as being more apt to learn something that maybe they didn’t realize about United Way.”

And United Way staff has created all new tools on its website to help company coordinators with their campaigns. There are motivational posters that they can put up in break rooms. A new video explains exactly what United Way does and who it helps.

Also new this year, United Way is giving out one $5,000 grant to a Wayne County public school and five $500 classroom grants.

“If they give their fair share, they can enter the education grant, as well as the fair share challenge,” Fritz said.

“For the classroom grant, they have to give their fair share. For the school grant, the school has to have $30 per employee at the school giving. That money is part of our sponsorship. We allocate this money separately from our campaign and it’s part of our fundraisers.”

Fritz noted that 100% of the money raised during the annual campaign stays in Wayne County to help area residents through programs the United Way supports from campaign contributions.

The campaign will wrap up the end of November, with a campaign finale event Dec. 2.