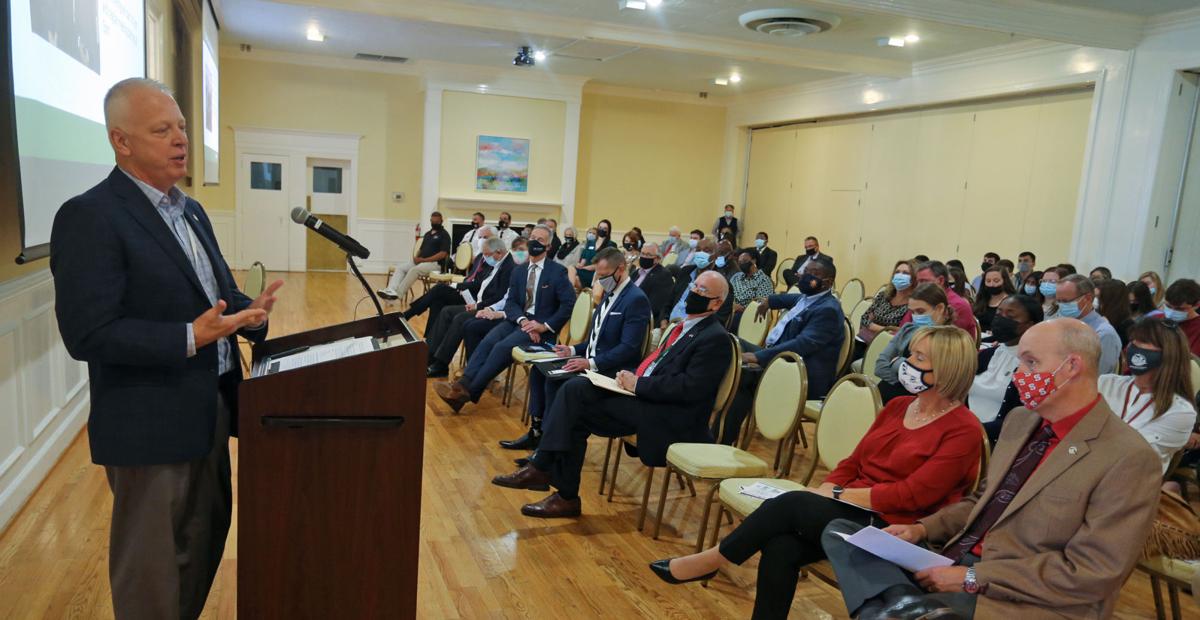 Wayne County Manager Craig Honeycutt talks about upcoming capital projects that include a new Fremont elementary school, expansion of the Carey A. Winders Detention Center and a new building for the Department of Social Services and Health Department. County and Goldsboro city leaders spoke during Tuesday’s State of the Community event held at the Goldsboro Event Center. 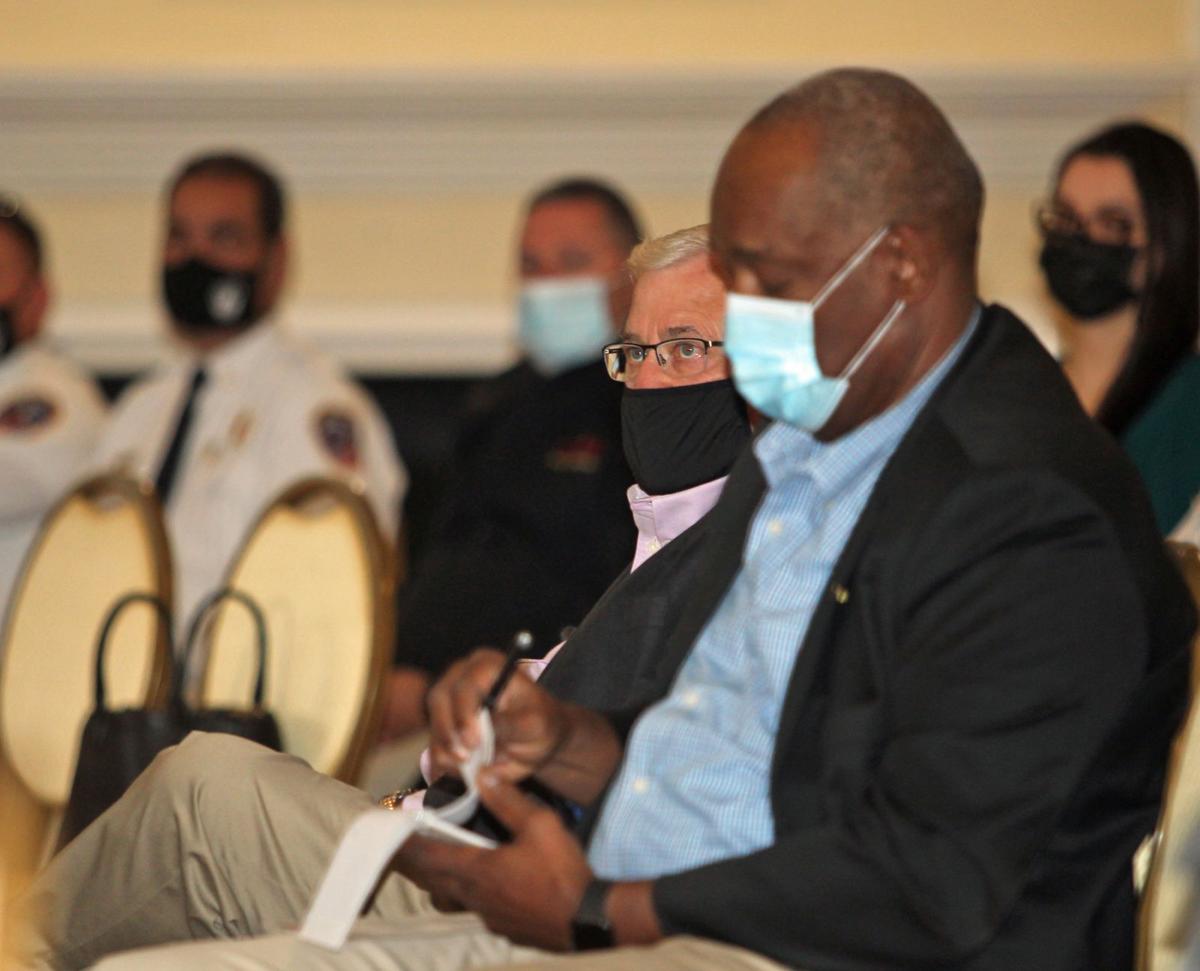 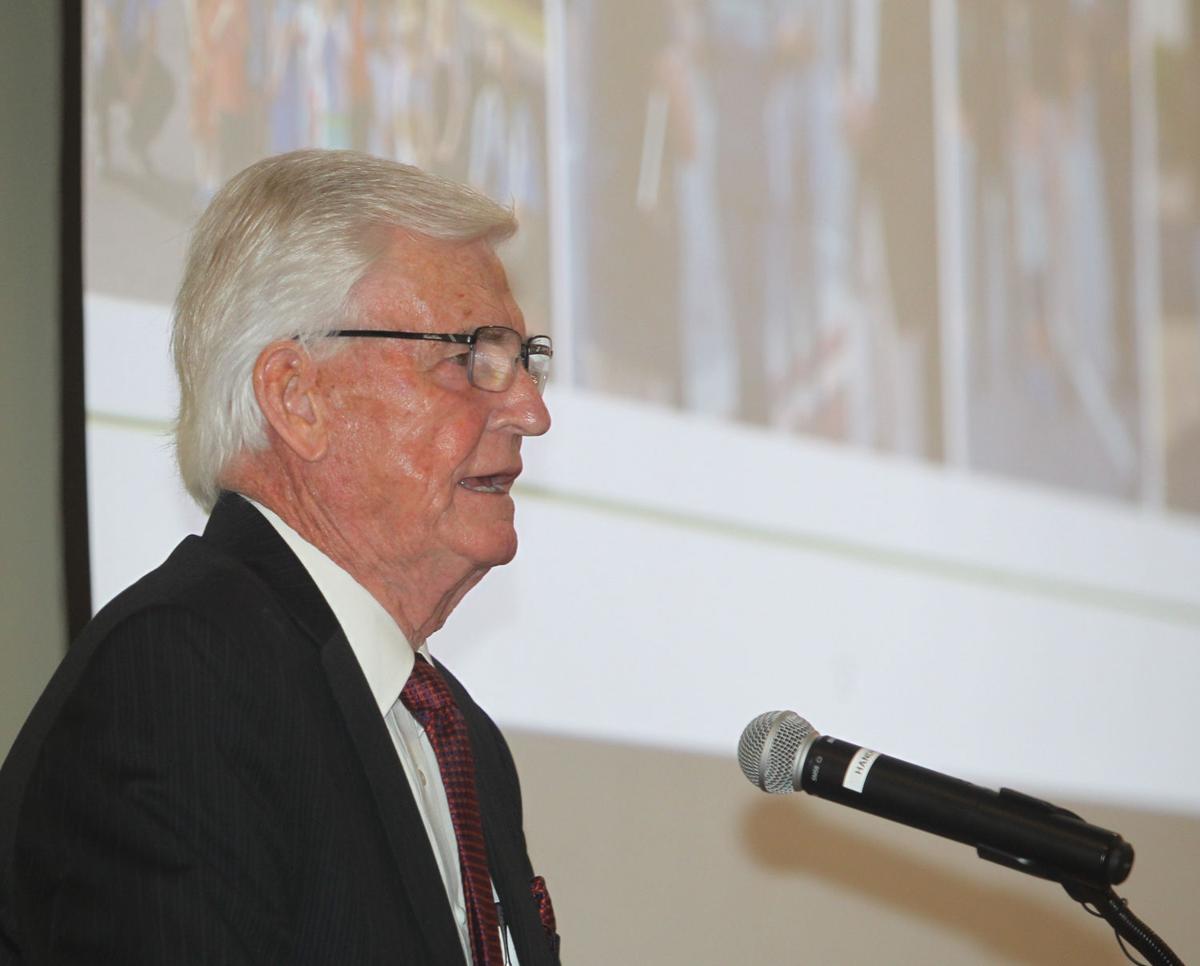 Wayne County Manager Craig Honeycutt talks about upcoming capital projects that include a new Fremont elementary school, expansion of the Carey A. Winders Detention Center and a new building for the Department of Social Services and Health Department. County and Goldsboro city leaders spoke during Tuesday’s State of the Community event held at the Goldsboro Event Center.

People are still investing time and money in Wayne County and city of Goldsboro — even during the time of the COVID-19 pandemic.

And both the county and city continue to move forward with millions of dollars in infrastructure and other projects designed to improve government services and the overall quality of life.

They acknowledged the pandemic’s adverse effects, but instead of dwelling on them focused on the future and the resiliency of the city and county.

They spoke as well of the cooperation between the city and county on various projects and issues.

Thankfully, the number of COVID-19 cases is trending downward countywide and 52% of the county’s population is at least partially vaccinated and 47% is fully vaccinated, Aycock said.

The vaccine site has changed from the old Bussmann building on Dixie Trail to the old Food Lion store in the Little River Shopping Center, Aycock said.

The county is working with the city to bring a hotel to the area next to the Maxwell Center on Wayne Memorial Drive, he said.

The plans for the hotel have been approved and survey work has started, Aycock said.

The recently completed census indicates that the county lost about 5,300 residents over the past 10 years — a decrease that Aycock said he does not agree with.

“I can’t explain why (the decrease), but I just don’t agree with it,” Aycock said.

Following the census, the county voting district map for commissioners and the school board were redrawn and were just approved by commissioners, he said.

“The map changed very little,” he said. “All the elected officials, commissioners and school board, the districts they are living in did not change.”

Honeycutt highlighted some of the projects underway in Wayne County,

“We’ve been doing a lot of things in the county and one of the big things that we have been working on is you probably saw we had tax increases here of four and a half cents,” Honeycutt said. “But as the chairman mentioned, we have a lot of capital projects that we’re working on.”

The county 2021-22 budget included a 4.4-cent property tax increase, on each $100 in property valuation, for capital projects that include $25 million for a new building to house the Department of Social Services and the Health Department; $5 million for a new Fremont elementary school; $25 million to expand the Cary A. Winders Detention Center; and $3 million to support completion of the Wayne Community College Advanced Manufacturing Center.

County employees consider themselves to be essential workers because they have to ensure that people have access to the services they need, he said.

They can’t do so by working from home, so basically they have worked through the pandemic, Honeycutt said.

“Were here for you,” Honeycutt said. “Again, we’re public servants. We always say that, you know, you have heard the old saying you can’t fight city hall.

“You shouldn’t have to fight city hall. We’re here for you. So if you’ve got issues or concerns, please let us know and we’ll try to help you out as much as we can.”

Ham thanked the audience for attending, adding that it helps for residents to be aware of what is going on in the city of Goldsboro.

Coming out of COVID, the theme of the recent Freedom Fest was “One Community,” Ham said.

“I truly believe we have one of the finest military and civilian communities in the country here in Goldsboro,” Ham said. “That was evident to anyone who attended the activities that recognized our military, first-responders and their families for their sacrifices, from the volunteers of nonprofit organizations that stood up to organize the various events to the business sponsors who supported them.”

It truly was a monumental effort that resulted in the largest festival the city has seen in recent history, he said.

Ham said that underscored what he wanted to talk about — the resilience of the city and county.

Both have been through a number of crises over the past five years, including Hurricanes Matthew and Florence and the pandemic, he said.

Through it all, however, Goldsboro, Wayne County and Seymour Johnson Air Force Base have fared rather well, he said.

The city will use $8.8 million in American Rescue Plan funding over the next three years to enhance budgetary and financial security, Ham said.

In addition, the city will receive $907,000 from the U.S. Department of Housing and Urban Development to address homeless, he said. A commission, to determine how the money will be allocated, will be formed soon, Ham said.

Ham said of personal interest to him is the creation of an economic development plan. Ham said he thinks such a plan is essential to guide how the city prepares for growth.

When it comes to a safe and secure community, most people might think of the police department first, Salmon said.

“They’ve done a great job. They’ve also professionalized their force with the Commission on Accreditation for Law Enforcement Agencies with the certification we got last November.”

The city also hosts community policing events where officers may help landscape someone’s home who needs it or holding a kickball event or a cookout, he said.

The city increased the pay to retain officers, too, Salmon said.

The city fire department not only responds quickly, but is also very good at water rescues and was recently certified by the North Carolina Rescue Association, he said.

The city and county enjoy a strong and diverse economy that includes Seymour Johnson Air Force Base, Salmon said.

“During COVID we have people investing in Goldsboro,” he said. “One of the larger ones is Atlantic Casualty Insurance at ($12.8 million).

“We’re expecting business and industry growth with some announcements soon (and a) dtrong diverse economy downtown. It is one of the great places I think in eastern North Carolina for a downtown.”

“Our sports tourism is also a big piece of our economic stability here,” he said. “Tourism in general was $142 million last year, down 24% due to COVID, but we expect it to come back in 2021.

“And the Bryan Multi-Sport Complex is a huge gainer for us in that — $1.5 million last year.”

Affordable housing is an issue in the city, he said.

City Council has a public hearing coming up on the Tiffany Gardens project and will hopefully make a decision to support it with $500,000 of HUD home funding to help make that project happen, he said.

The city is helping in other projects, too, that would enhance affordable housing, he said.