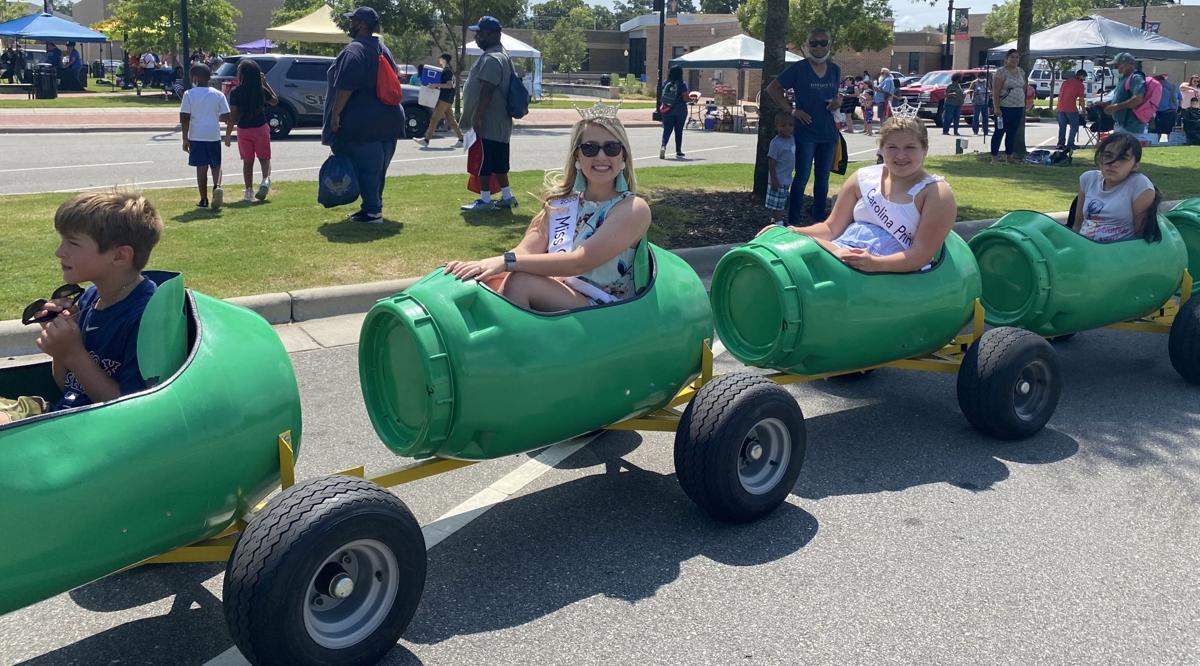 Riding the pickle train at the Optimist Club’s Kids Funfest in Goldsboro in August is Miss Goldsboro, Alexis Brown, second from left. Behind her is Carolina Princess, Lana Perkins. 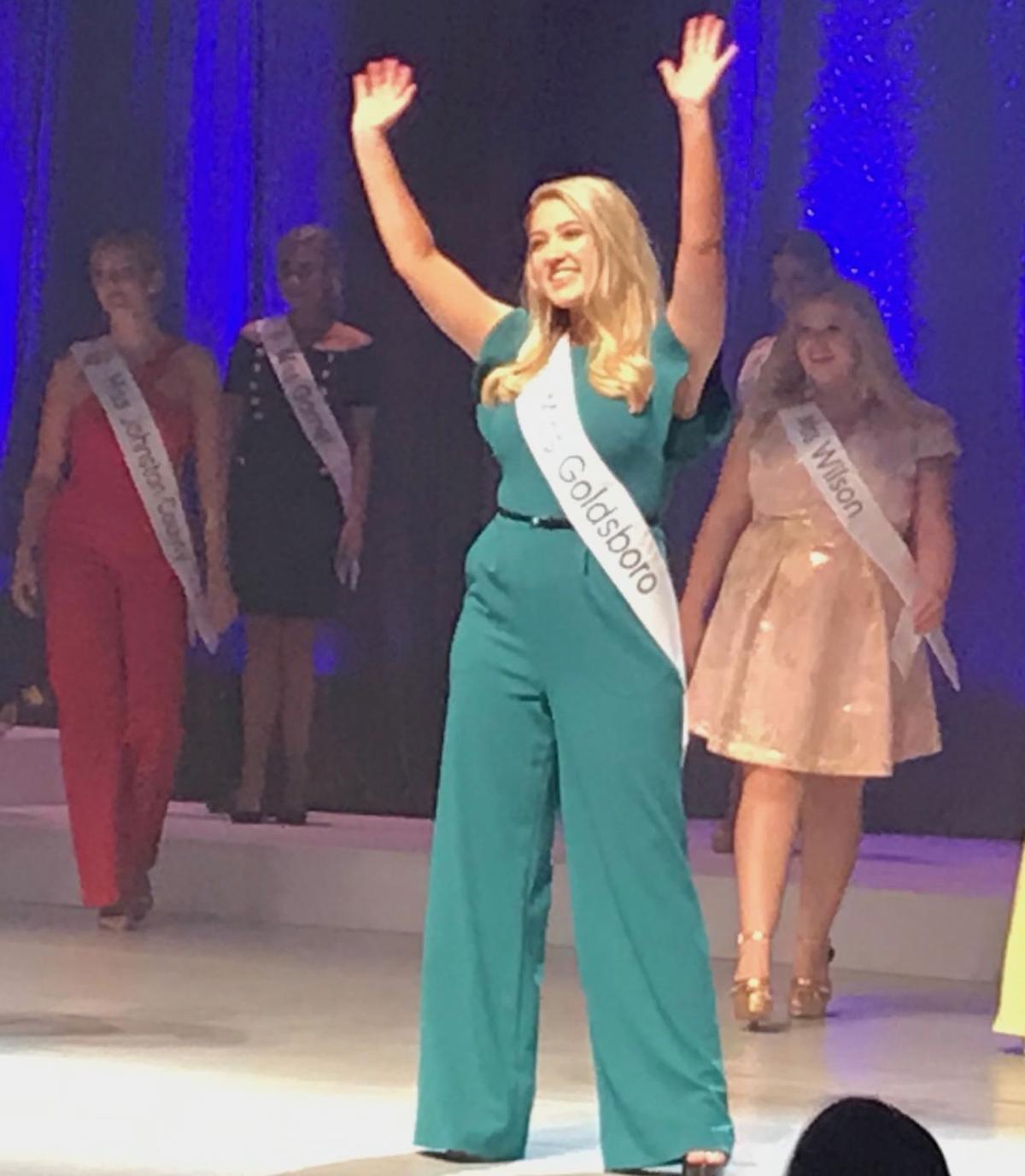 As Miss Goldsboro, Alexis Brown participates in the onstage production at the Miss North Carolina pageant in June. 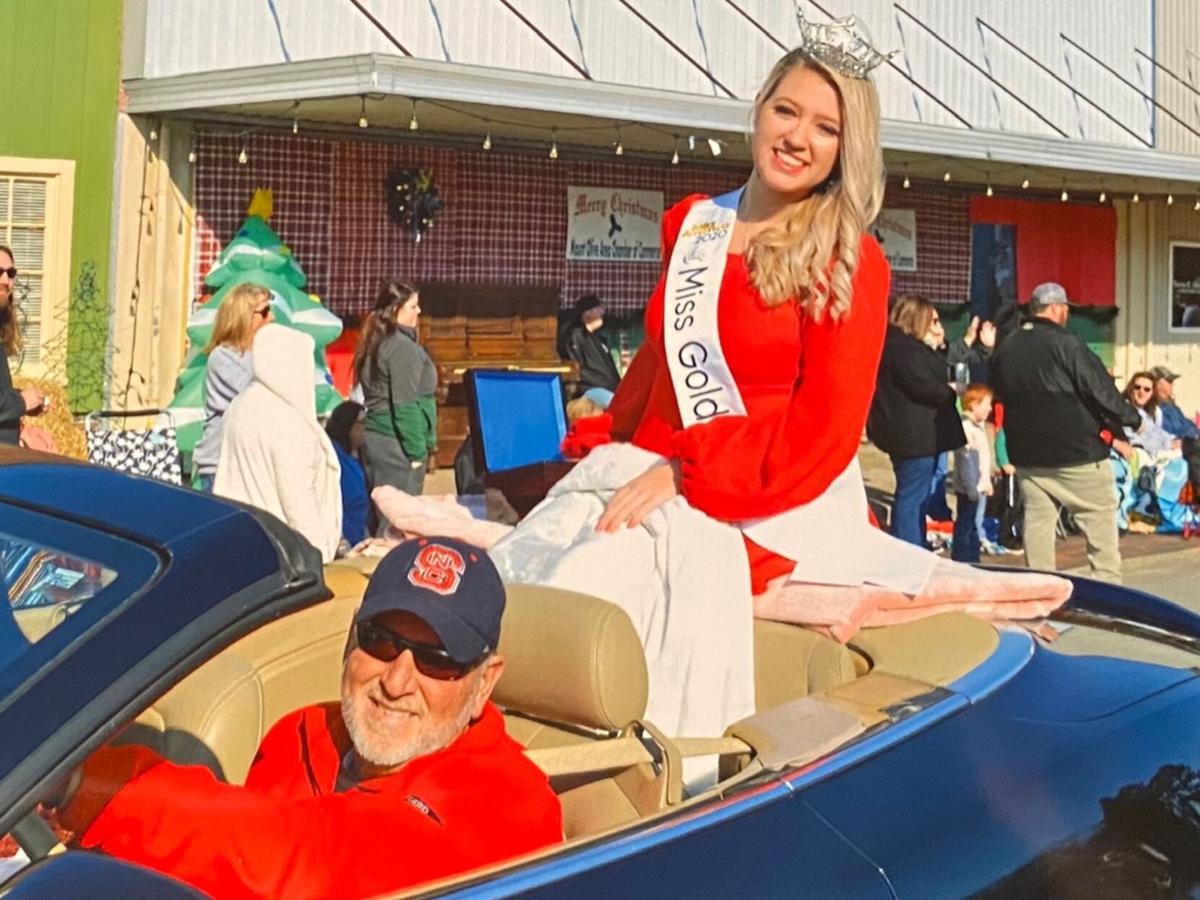 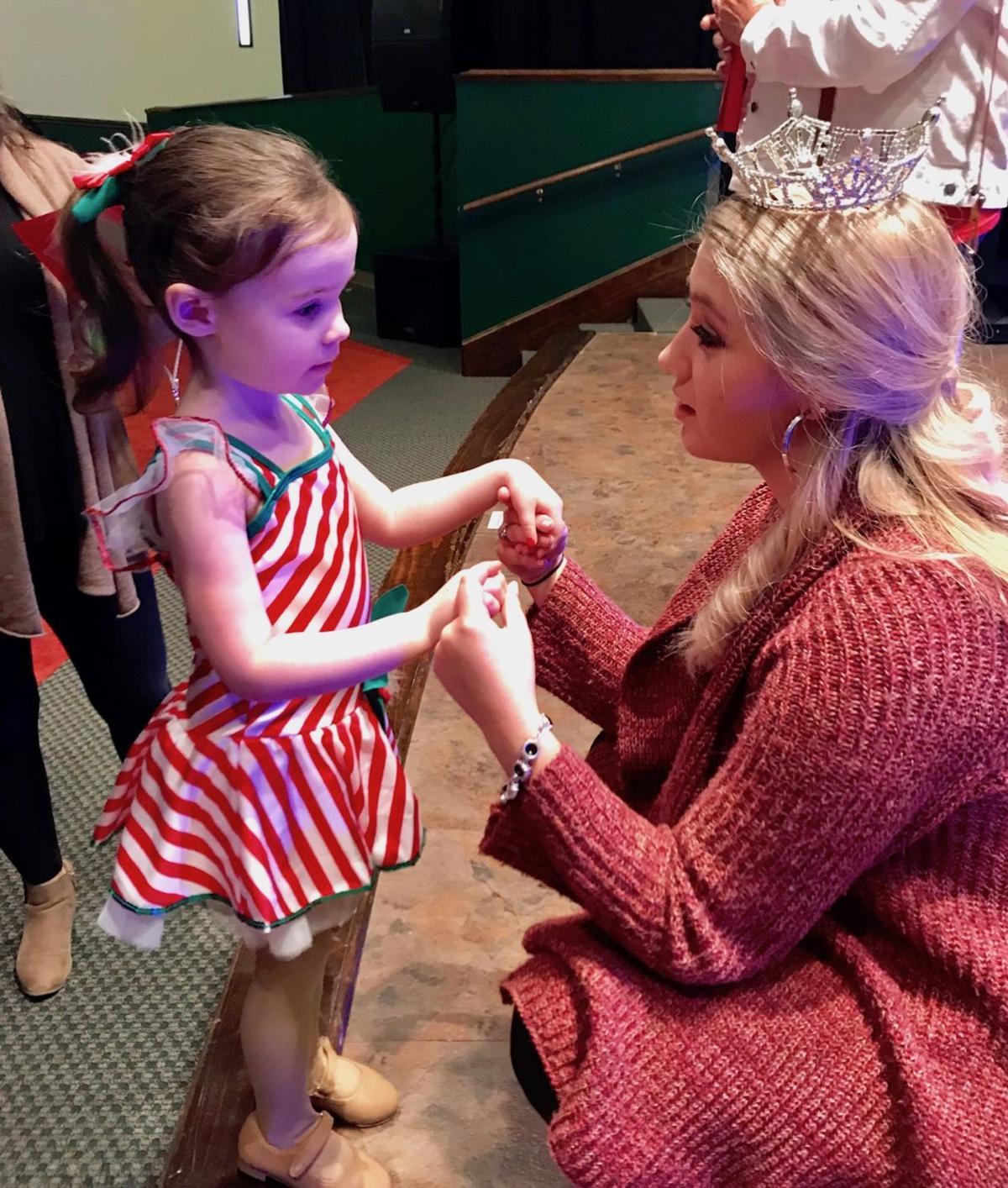 Alexis Brown talks with Annabel Coggins at the 2019 Step Into Christmas event sponsored by Desiree Autry's Academy for the Performing Arts. Autry is a former Miss Goldsboro. 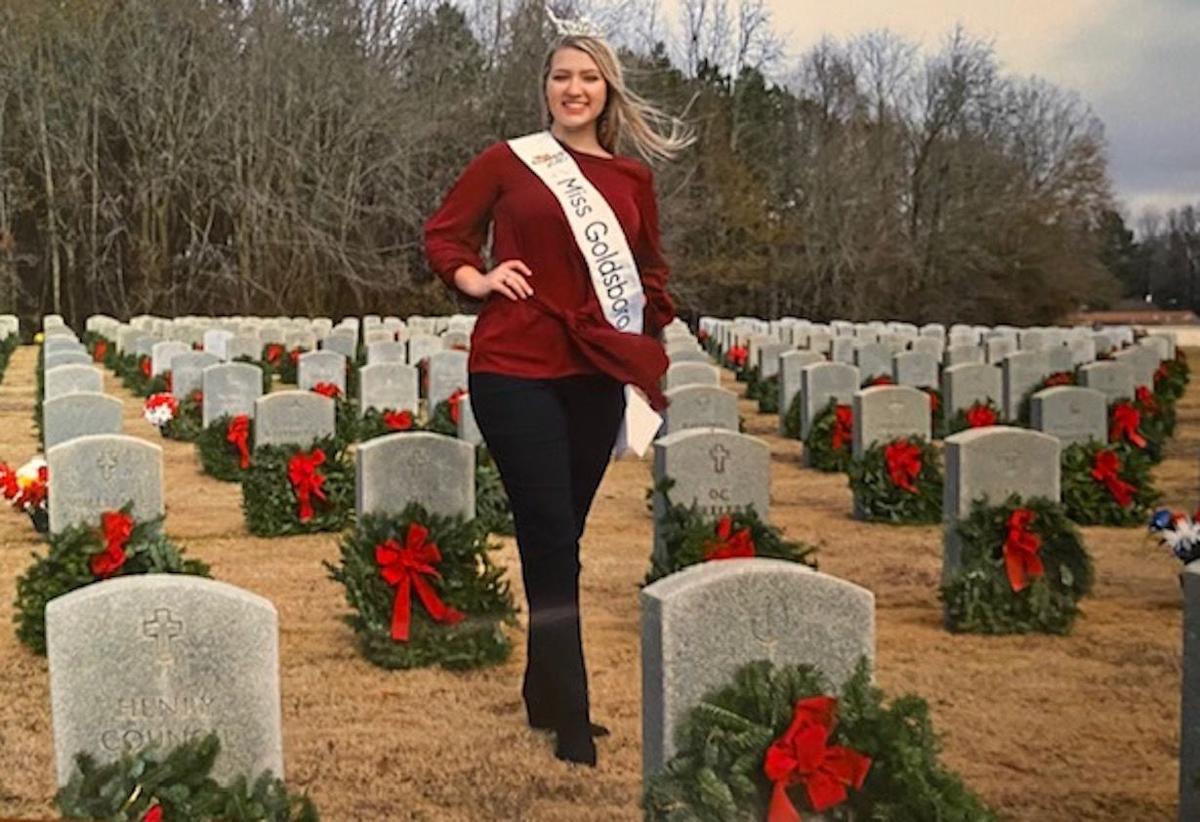 Alexis Brown, Miss Goldsboro, stands among the many wreaths she helped put on graves during the Wreaths Across America event.

Riding the pickle train at the Optimist Club’s Kids Funfest in Goldsboro in August is Miss Goldsboro, Alexis Brown, second from left. Behind her is Carolina Princess, Lana Perkins.

As Miss Goldsboro, Alexis Brown participates in the onstage production at the Miss North Carolina pageant in June.

Alexis Brown talks with Annabel Coggins at the 2019 Step Into Christmas event sponsored by Desiree Autry's Academy for the Performing Arts. Autry is a former Miss Goldsboro.

Alexis Brown, Miss Goldsboro, stands among the many wreaths she helped put on graves during the Wreaths Across America event.

Alexis Brown found her passion — and her job — because of her reign as Miss Goldsboro.

She also has the distinction of being the only Miss Goldsboro to hold the title for two years instead of one due to the pandemic.

Brown won the title in November 2019, and would normally have given it up the following November.

But due to COVID-19, all local, state and national Miss America pageants for 2020 were canceled. The Miss Goldsboro pageant is a preliminary for the Miss North Carolina competition and part of the Miss America competition.

She’ll never forget the day she received word that she would keep her Miss Goldsboro title an extra year. She was living with her sister and her family in Delaware.

“After COVID hit, my older sister, Nadine, and her husband, Brandon, who were military and living in Delaware, panicked because day care was closing,” Brown said.

Her sister had two boys, Camden, 5, and Cayde, 2, who would be without day care. Brown was still in college at the University of North Carolina at Greensboro, but with the pandemic, students weren’t allowed on campus.

“I drove my car up there and lived with my sister in her basement for four months and I kept my nephews,” Brown said. “It was the greatest time of my life. It was wonderful to be able to live with them and help raise my nephews.”

Brown said the day she got the email that she would keep her title another year, she ran downstairs to her sister, who was working remotely from home.

“I remember I was tearing up,” Brown said. “My whole family knew what a dream it was. Being in Delaware at that time, I was afraid I’d miss out on opportunities to be Miss Goldsboro because I was up there. But I knew that I was doing what I had to do for my family.

“When I was told I would get to hold my title for another year, I was over the moon. It was like I was getting that time back. The pandemic threw a wrench into my plans, but it definitely worked out in the end.”

Because it was Brown’s dream to become a Miss Goldsboro, she entered the pageant four times before finally winning. She didn’t place the first time and was first runner-up the next two times.

“Something in me just told me that I was meant to be Miss Goldsboro,” she said.

Miss Goldsboro executive director Blair Mozingo said of Brown, “Alexis has been the truest example of dreams coming true. Not only has she been able to earn the title of Miss Goldsboro after years of chasing her dream, but she was able to represent this beautiful town for two years.

“I have seen her emerge professionally, personally and academically, all of which I believe skills were evolved through her experience in the Miss America program.”

Brown said she’s made some close friends and won scholarship money because of the pageant. And she’s also gained valuable interview skills, as well as professional and personal development skills.

She won the title of Miss Goldsboro while in college. She said interview skills she gained from the pageant helped her land an internship.

Brown interned at Randolph County Family Crisis Center, a domestic violence, physical assault, human trafficking and child abuse agency in Asheboro. After interning a year, she was hired permanently, and is a case manager and social worker, as well as a domestic violence support group facilitator.

“I’ve always been passionate about fighting for those who can’t fight for themselves,” she said.

Brown graduated from college on May 7 and started her new job May 10.

Brown participated in the Miss North Carolina pageant in June, but didn’t place.

“And that is completely fine,” she said. “Being Miss Goldsboro was my dream. I just wanted to represent myself and Goldsboro well. I think I did that.”

But Brown did especially like the evening gown competition.

“During the interview question, you get to know the minds of these girls,” she said. “But in evening gown, you get to see what their style is. My evening gown is black, and it’s beaded with a back skirt. It’s so intricate.

“For me, that’s kind of a metaphor for my personality because black is just black. It doesn’t have a bunch of colors or sequins or anything. But if you look closely, there’s beading and lace. I’m really intricate on the inside, but I’m just me on the outside, very elegant, very simple, but also with a twist.”

Brown describes herself as authentic.

Holding the title has boosted Brown’s confidence, too.

Although she now lives and works in Asheville, Brown said Goldsboro is — and always will be — her hometown. She grew up in Pikeville, where her mother, Carol, still lives and Fremont, where her father, Joe, lives. And her younger sister, Katie, also lives in Wayne County.

“Pikeville and Fremont will always be home,” Brown said. “No matter where I am, my roots will be in Wayne County for sure.”

Every Friday at 4:30 p.m., she’s headed back to Wayne County from Asheville to attend various events as Miss Goldsboro.

“I felt called to be Miss Goldsboro and a social worker in a domestic violence setting,” Brown said. “So I’m going to do everything I can to fulfill those dreams and those duties.

“Being Miss Goldsboro was everything to me, and I want to be able to crown a girl in November who feels the same way. I’m ready to start a new chapter in my life and pass along the crown to someone else and see where life takes me after this.”