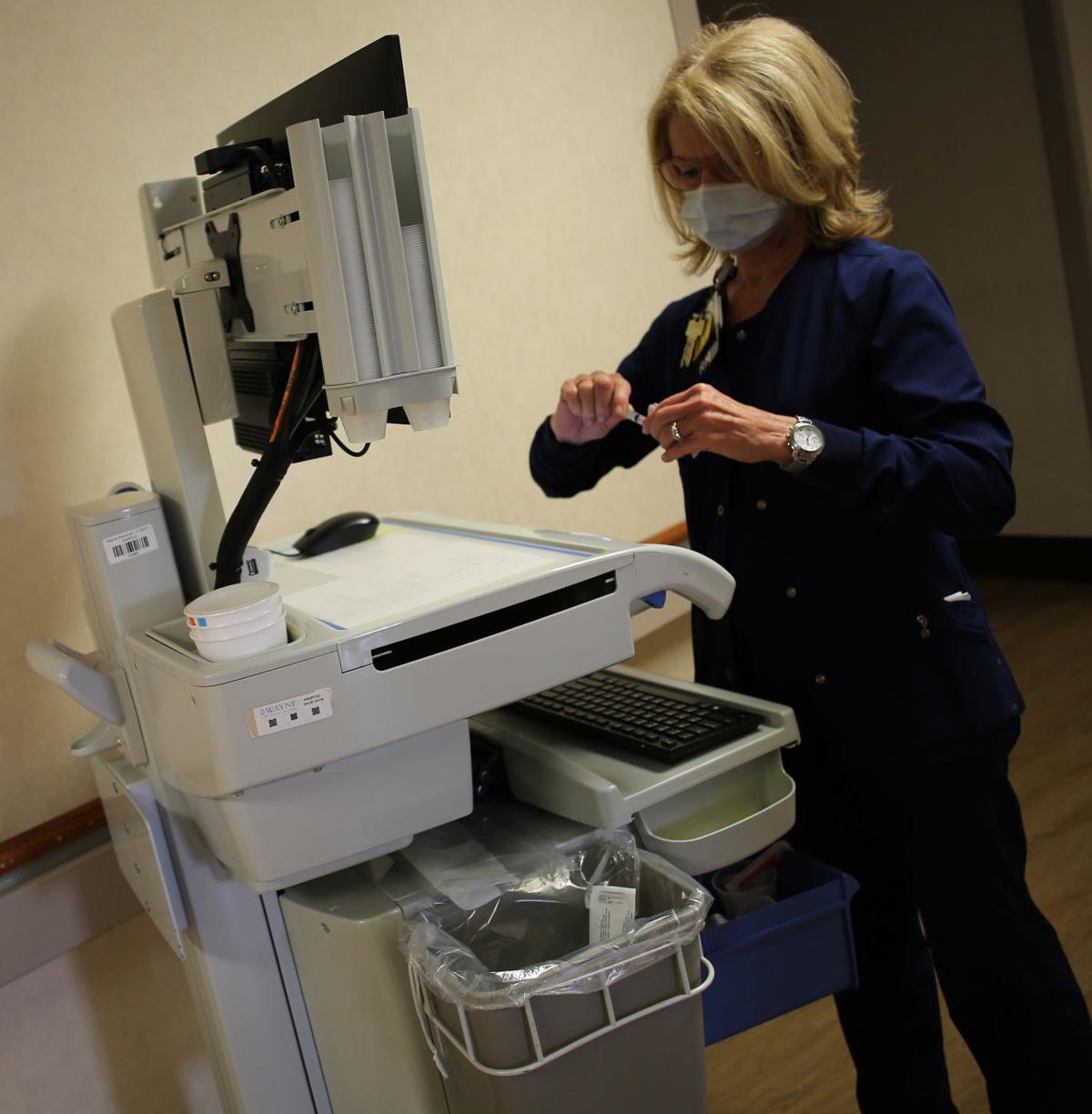 Mary Ellen Lutcavage prepares a needle with medication for a patient. During her 27 years at Wayne UNC Health Care, she has seen many changes. The hospital is celebrating its 125th anniversary this year. 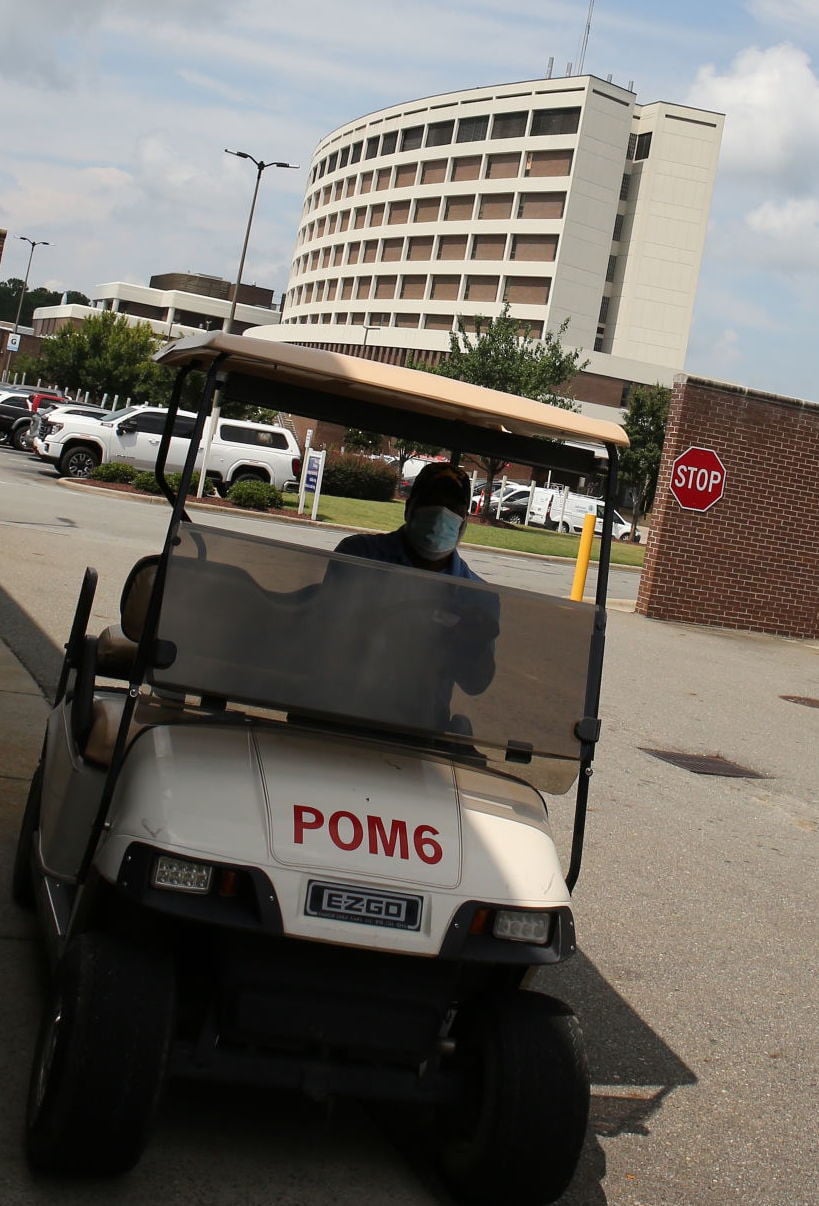 Phillip Ray Cox has seen many changes at the hospital during his 26 years in security then plant engineering and maintenance. 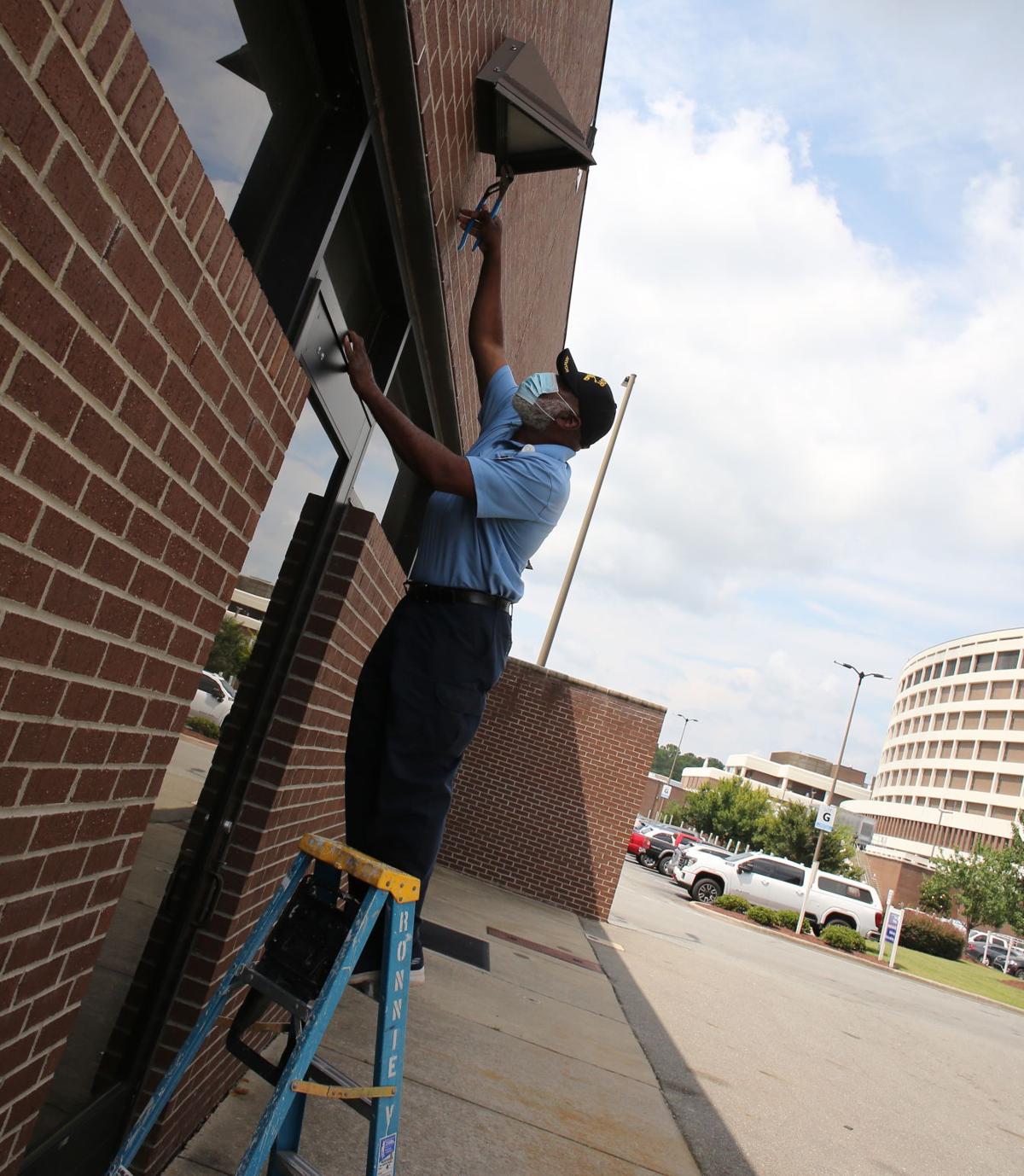 Phillip Ray Cox, a 26-year employee of the hospital, fixes a light at Wayne UNC Health Care. He started out in security at the hospital then transferred to plant engineering and maintenance. 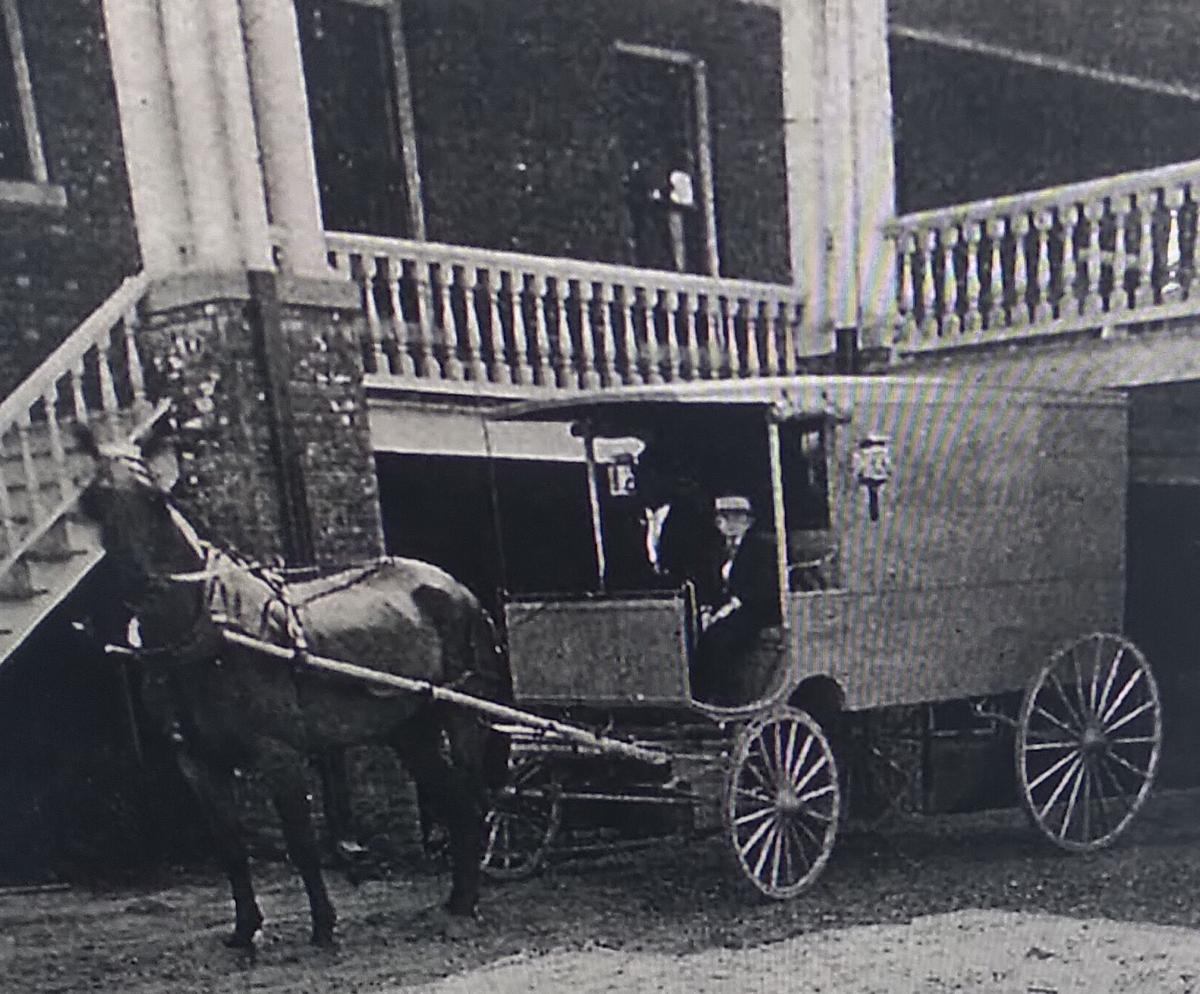 The hospital's first ambulance was a horse and buggy, as shown in this photo. 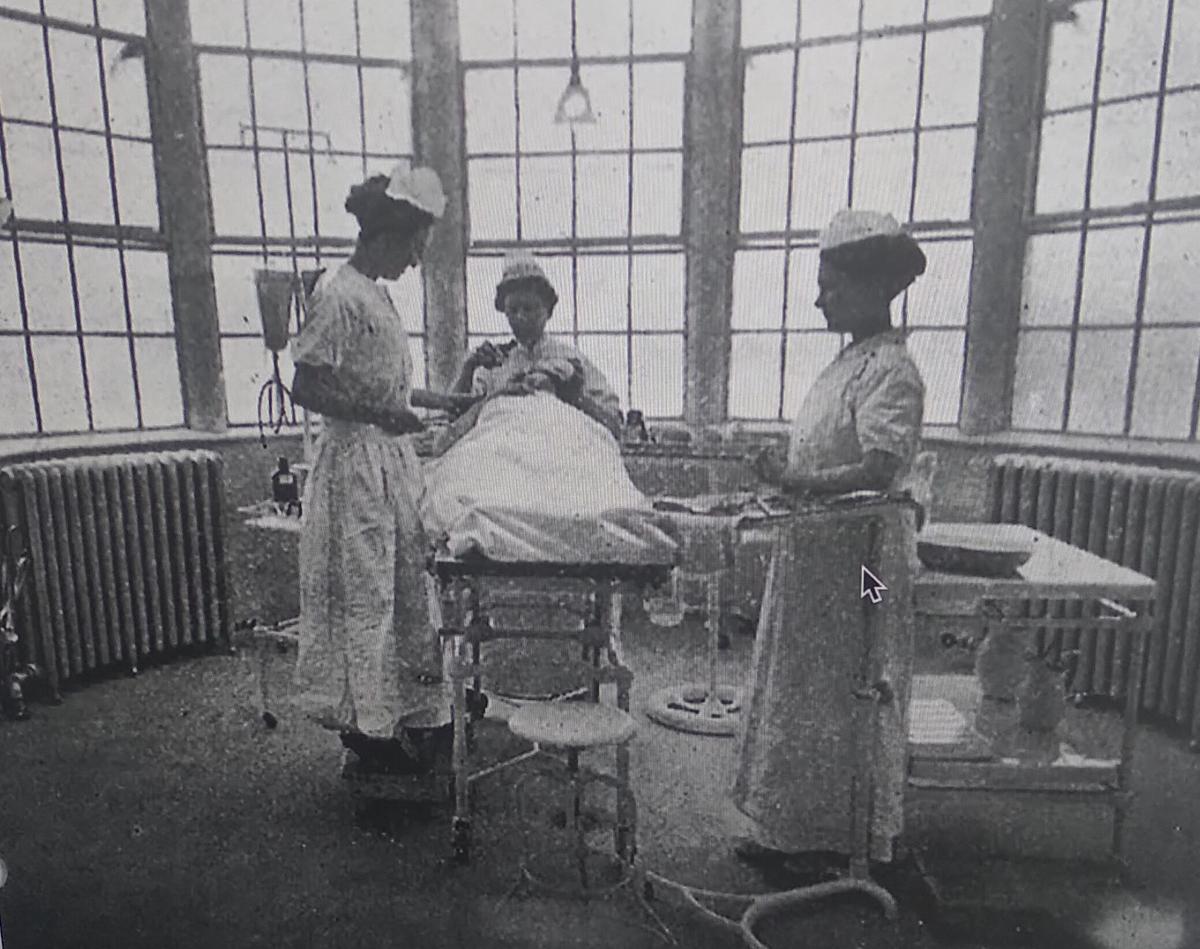 This photo shows an operating room at the hospital in 1912.

Mary Ellen Lutcavage prepares a needle with medication for a patient. During her 27 years at Wayne UNC Health Care, she has seen many changes. The hospital is celebrating its 125th anniversary this year.

Phillip Ray Cox has seen many changes at the hospital during his 26 years in security then plant engineering and maintenance.

Phillip Ray Cox, a 26-year employee of the hospital, fixes a light at Wayne UNC Health Care. He started out in security at the hospital then transferred to plant engineering and maintenance.

The hospital's first ambulance was a horse and buggy, as shown in this photo.

This photo shows an operating room at the hospital in 1912.

Wayne UNC Health Care is celebrating its 125th anniversary this year, having gone from a modest hospital over a horse stable to a huge complex on Wayne Memorial Drive today.

The hospital has experienced changes in location, medical technology, staff and more over the years.

One longtime nurse, Mary Ellen Lutcavage, said the biggest change she’s seen in her 27 years at the hospital has been technology. She is an oncology nurse.

“When I first started, everything was on paper,” she said. “Now everything is in the computer. Physician orders, medications, allergies, labs and test results, even the patient’s medical history from another facility is available to us.”

Lutcavage said that helps the nurses respond quicker to patients’ needs. And the patients themselves can see everything in their medical records.

The nurses no longer the need to wait for the provider in order to obtain test results, she said. “They are able to look up the information themselves as soon as it is available. Technology has definitely changed every aspect of health care.

Another change Lutcavage has seen is the addition of a new surgical center and two emergency departments. She’s also watched the whole west wing of the hospital being built, as well as the whole southwest wing.

Lutcavage is amazed with the progress that’s been made at the hospital in cancer care.

“We have treatment modalities that we didn’t have 27 years ago when I started,” she said. “The diagnostic capabilities that we have both in our radiology department and pathology now give us so much information about how to treat these patients.”

And although Lutcavage has seen all these changes, it’s been in increments. And more advances are being made all the time.

She said she wanted to be a nurse since she was a little girl. After she got her nursing degree, she started working in oncology at the hospital and has been there ever since.

Medicine and caring about people were what drew Lutcavage to the nursing profession.

“I like watching people heal, and especially with cancer patients, to be able to take care of them is amazing,” she said. “It’s like a privilege.

“They are such a very grateful group of patients. But you can watch such great outcomes with them. They come in with a very difficult diagnosis, and they’re scared. We can help them through those difficult times, and it’s just an amazing thing. So many people think that cancer is a death sentence. But we see miracles every day, and great, great success stories.”

Lutcavage said especially with oncology patients, she gets to know them very well. Sometimes they have to stay in the hospital for quite some time. Other times, they’re in and out frequently because of changes in their condition or the disease progression.

Sometimes the patient dies, and Lutcavage has to deal with that aspect of nursing.

“They talk about birth being a sacred moment, welcoming new life into the world,” she said. “And it is.

“But death can be a sacred moment, too. To be able to be with someone and ease them through that moment is very special. I’m not saying it’s not hard sometimes. Sure we cry.”

But the patients are what keep Lutcavage going.

“Personally, my experience with oncology and oncology patients is that they give at least as much back to us if not more than we give to them,” she said. “They have such a fighting spirit. What these patients will go through is amazing. And their faith is amazing. And that kind of keeps you going.”

And she credits the people she works with for keeping her going, too.

“It’s just an amazing group to work with, a good team,” Lutcavage said. “And I don’t mean the team on one floor, I mean the team throughout the hospital. We have a lot of people who have been here for many, many, many years. And they do it because they love it. And when you love it, it’s an easy job.”

Another longtime employee at the hospital, Phillip Ray Cox, will celebrate his 26-year anniversary at the hospital in October. He started out in security, but then transferred to plant engineering and maintenance.

He’s seen a lot of change there, with a lot of the equipment that keeps the hospital running being updated. And he’s seen the addition of new boiler systems and new generators.

“When I started in here, I started in security,” he said. “I was around and interacted with the patients and others when they came in and gave them any help they needed.”

When he worked in security, Cox said his biggest memory was going to the morgue with families.

“The reason why I say that is when families came in to see their loved ones for the last time, they needed somebody that was going to be there to help them through that transition,” he said. “I felt as though I was really there for them because I was able to give them a little bit of encouragement and just be there for them because it was a really tough time for them.”

His biggest memory being in engineering and maintenance has been going into a patient’s room and seeing the expression on the patient’s face when he’s fixing things in the room.

“A lot of times people might be out here for three weeks or three months and might not have any family. We are their family. We’re the only ones that they get to interact with.”

Cox said he does what he does at the hospital because he loves being in that environment.

The hospital has a booklet containing its history and photos from past years.

It explains that a hospital in Goldsboro came about after the Rev. Francis Waller Farries, the new pastor of First Presbyterian Church, saw an accident downtown in 1893. He discovered that there was no emergency help for the victim, and decided to try and establish an emergency hospital here.

The first hospital was dedicated Feb. 18, 1896, and was located above a horse stable at the southwest corner of Center and Mulberry streets. The doctors back then donated their services.

In 1912, a new hospital building was built on Herman Street. The cornerstone read “Erected by the people of Goldsboro for the relief of the suffering of humanity.” It had four stories, and nurses lived on the top floor.

The fee schedule for services in 1918 included a price scale for commodities exchanged for services. That was because money was scarce at that time.

Another interesting fact is that the first ambulance for the hospital was a horse and buggy.

An unusual fact is that for five years in the early 1960s, a child named Frankie Brown lived at the hospital.

A story in the News Argus explained how the toddler was critically burned on the lower half of his body when a hot stove pipe fell on him, and his family abandoned him at the hospital. No one saw it and no one ever knew who Brown’s family was.

The boy underwent more than 20 surgeries and skin grafts, as well as a colostomy at the time the story was printed in the newspaper. And he had to have all his toes amputated.

The hospital staff cared for Brown until he died at the age of 5.

The current hospital building on Wayne Memorial Drive opened in 1970.

Although the hospital has gone through many changes over the years, it’s still updating its building, medical technology and more.