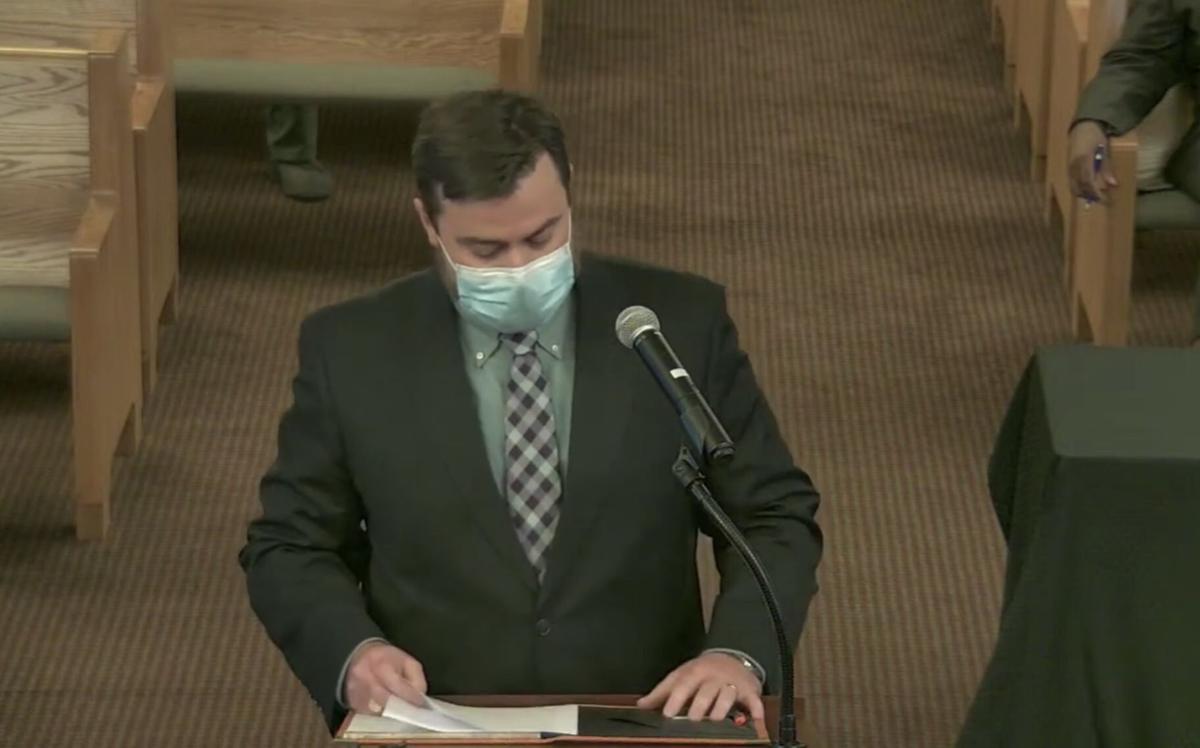 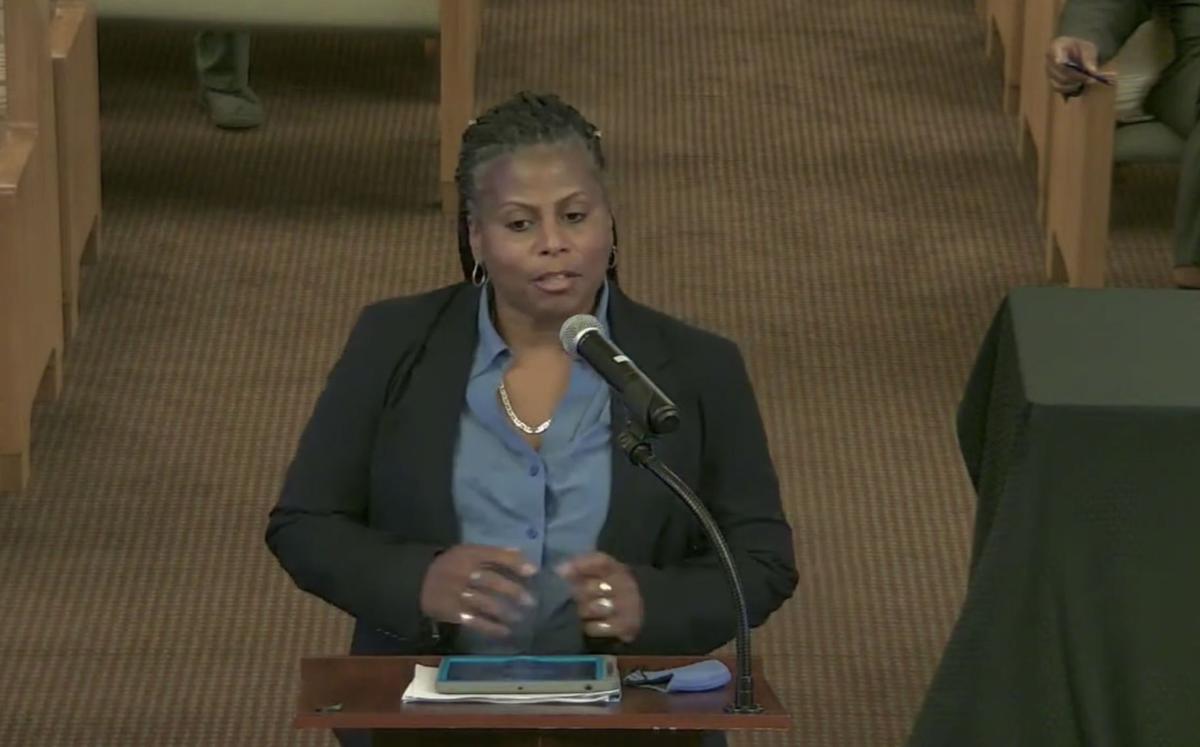 Phyllis Merritt-James, an applicant for the District 5 seat on the Goldsboro City Council, presents to council Monday in City Hall reasons she should be appointed to the post.

Phyllis Merritt-James, an applicant for the District 5 seat on the Goldsboro City Council, presents to council Monday in City Hall reasons she should be appointed to the post.

The Goldsboro City Council heard from two residents interested in serving on council and denied a special-use permit for a downtown Hookah bar Monday.

The council’s denial comes on the heels of the Goldsboro Planning Commission recommendation to deny the permit because the proposed location, at 120 E. Mulberry St., is not free-standing building, which is required by state law.

Kenny Talton, Goldsboro interim planning director, told council the planning commission denied the permit without prejudice, which means the owners can be reconsidered for approval if they reapply after finding a free-standing building.

Councilwoman Hiawatha Jones asked Talton if an exception can be made.

“Kenneth, I would hate to not see this business come here and I’m listening but my concerns are — is there anything within the (city) codes that we can do or what can be done because there are other bars that are there along that line, so what can we do as a council and a city to help these individuals?” Jones said.

Talton said the city is required to follow state law.

“Councilwoman Jones, at this point and time, unless the state legislature were to change its requirements, we have to follow those requirements with the knowledge at hand in this decision-making process,” Talton said.

“I would love to see something like this,” Polack said. “My wife and I just got back from Wilmington and they have a couple of culturally diverse, not per-se hookah lounges but CBD and alternative weed choices.

“It was really a bump in the nightlife downtown.”

Also during its Monday work session in City Hall, the council received presentations from applicants Charles Gaylor IV and Phyllis Merritt-James who are interested in serving in the District 5 seat.

“Goldsboro is in a prime location during a transformative time in our state and nation,” said Gaylor. “While many states are seeing population decline, North Carolina is seeing major population growth. Greenville and Raleigh are going to continue to grow. By default, we will too.”

Gaylor focused his presentation on economic development and addressed the city’s aging water and sewer system, which he said needs to be fixed.

“You’ve got to have those supplies in place and so that requires investment by the city.”

Polack asked Gaylor what additional contributions he can make on the council to ensure that all residents can feel valued, no matter their socio-economic status.

“What matters to me is are you a voting, tax-paying member of the city of Goldsboro and I’m not just saying District 5. If someone outside of District 5 comes to me with a question, I’m going to listen.”

Gaylor said he wants everyone to do their part to make Goldsboro an attractive place to call home.

“We have an incredible city staff who worked long hours in some challenging conditions to make the city aesthetically attractive,” he said. “I want to support their efforts and multiply them.”

What District 5 needs, Gaylor said, is another leader with integrity, vision and humility.

“If appointed, I will strive to build respectful and productive relationships with each of you with our committed city employees and with the dedicated and resilient citizens of District 5,” Gaylor said.

Councilman Gene Aycock, who said he has known Gaylor for years, asked Gaylor if he could vote against him on issues.

“You and I have known each other since Montessori school ... if I voted one way on something and you felt differently, would you have any problems voting the opposite way?” Aycock said.

“No sir ... no sir, not at all,” Gaylor said. “I believe that both of us are reasonable people, (logical) and attempt to be educated (about) whatever the issue would be. We may not always agree and that’s fine. That’s what makes civil discourse powerful.”

Merritt-James, 55, a nurse practitioner with North Carolina Nephrology in Raleigh, said she views the role of a council member as being available to listen, analyze and have an awareness of the needs of the city and its residents. She has been a city resident for about 43 years.

Merritt-James said the city is facing a crisis when it comes to affordable housing, employment and health care and that youth have little to do to keep them out of trouble.

“We also have lost many of the programs that were available to our youth and teens, creating idle minds,” said Merritt-James.

Her vision for Goldsboro is for it to be a beacon of excellence for other municipalities to come and model.

She believes to do that, the council must work collaboratively to improve the physical, mental and socio-economic health of its citizens.

She also wants to improve the city’s infrastructure with support systems that will attract businesses to come and stay.

One major focus of her presentation involved improving access to health care in the city.

She said the council needs to assess what makes health care providers come and stay and what makes them leave.

She also advocated for improve internet access and living wages for workers.

Mayor David Ham said the city will soon have a homeless commission and $1 million to spend and asked Merritt-James if she had suggestions to pass along.

Her suggestions included incorporating the homeless into society and connecting them with resources like education, jobs and affordable housing.

Merritt-James also pointed out that not all who are homeless are so because of their life choices.

She said the council needs to make sure it has a good plan and not one that will take 20 years to come to fruition.

“We’re very concerned about how that money is going to be spent by the way,” Ham said.

The council recently accepted applications for the District 5 seat that was vacated by Ham, who was sworn in as mayor, in September.

The applicant appointed by council will serve out the remainder of the term, which ends after the November 2023 election.

The council will consider making its appointment during its Oct. 18 meeting.