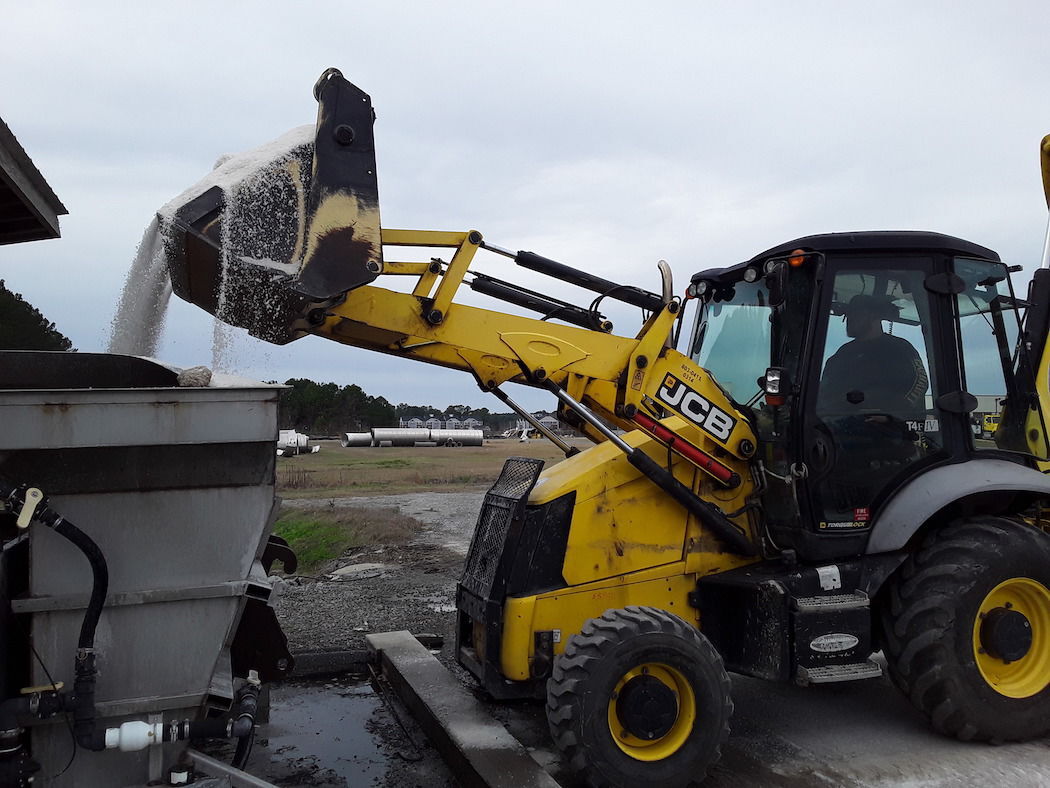 Connor McLamb, a N.C. Department of Transportation worker, pours salt into a vat Thursday, in the DOT maintenance yard near U.S. 70 in Wayne County, to create brine, which is applied to roadways to help remove snow and ice. 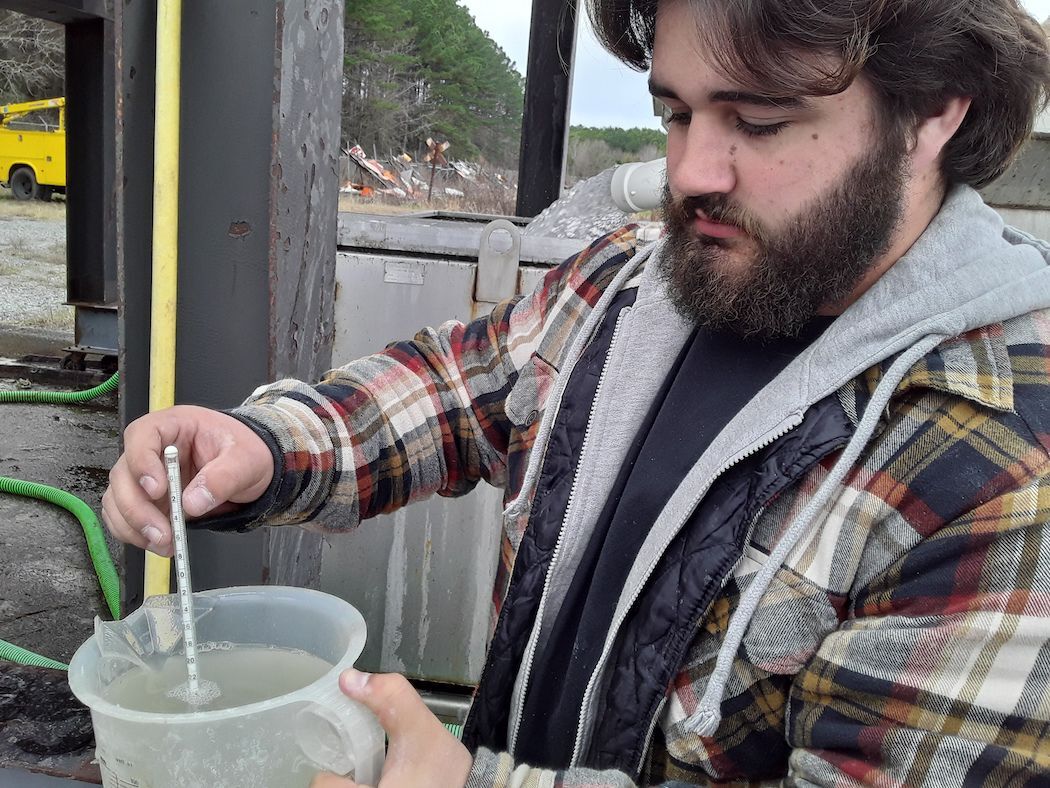 Josh Wallace, N.C. Department of Transportation engineering technician, checks the salinity of brine in the DOT maintenance yard near U.S. 70 Thursday before brine is loaded onto vehicles and applied to area roadways.

Connor McLamb, a N.C. Department of Transportation worker, pours salt into a vat Thursday, in the DOT maintenance yard near U.S. 70 in Wayne County, to create brine, which is applied to roadways to help remove snow and ice.

Josh Wallace, N.C. Department of Transportation engineering technician, checks the salinity of brine in the DOT maintenance yard near U.S. 70 Thursday before brine is loaded onto vehicles and applied to area roadways.

The weather system is expected to bring more rain, freezing rain and sleet than snow, said Jimmy Taeger, a meteorologist with the National Weather Service in Raleigh.

“As of right now, the system is expected to make its way into Wayne County in the early morning hours of Sunday,” Taeger said.

“I don’t have a precise time right now since the system is still so far out, but it’s looking like it will enter the area early Sunday morning. The system will be in the area for a handful of hours and then move out by late Sunday night.”

The National Weather Service predicts snow and sleet accumulation of less than a half inch early Sunday, followed by sleet before 9 a.m. Freezing rain and sleet is predicted to continue until 11 a.m. During the day Sunday, the NWS predicts new precipitation between three quarters and one inch is possible.

The Sunday evening temperature, predicted at 34 degrees, is above freezing and not low enough to create dangerous driving conditions Monday morning, Taeger said.

Wintry precipitation is common this time of the year, he said. Temperatures are predicted to improve as the week progresses, he said.

“Right now, it’s looking like the weather will be pretty dry after Sunday,” he said. “You’re looking at highs in the 40s Monday and Tuesday and into the 50s by Wednesday.”

Temperatures Monday are predicted to reach a high of 47 degrees. Tuesday’s high is predicted at 46 degrees, with temperatures reaching a high of 52 degrees Wednesday, according to the National Weather Service.

The National Weather Service predicts snow near the Interstate 85 corridor throughout the day Sunday. Wayne, Wilson, Nash, Edgecombe and Johnston counties will potentially experience the accumulation of as much as a quarter of an inch of ice from freezing rain and sleet Sunday morning before the weather changes to rain as warm air moves in from the south.

Although the system is not expected to reach North Carolina and Wayne County until Sunday, Luther Thompson, N.C. Department of Transportation maintenance supervisor in Goldsboro, said DOT crews are preparing area roadways.

“We’ve already laid down about 15,000 gallons of brine solution across the county as of Thursday,” Thompson said. “That includes on roads such as Ash Street, U.S. 70 West, George Street and Grantham Street. We’ll do the four-lane roads, such as the U.S. highway 70 Bypass, U.S. highway 117 toward Mount Olive, and (Interstate) 795 today to finish up and let the guys rest before we go on call Saturday.”

Brine, a solution of salt, water and additives, is used to cover roads and decrease the chance of freezing during winter storms.

DOT crews started putting down brine solution ahead of time to make sure it had time to interact with the road surface prior to any snow or sleet, Thompson said. The treatment helps make it easier for crews to plow snow and it helps reduce or prevent the accumulation of ice on roadways.

DOT crews in Wayne County perform a prerun in October to test equipment to make sure it is ready for any inclement weather during winter months, Thompson said. Brine spreaders, plows and other equipment are part of the annual check of DOT’s 22 pieces of road maintenance equipment.

Thompson recommends drivers exercise caution if they have to go out this weekend.

“No matter what, it is safer to be at home in any situation involving snow and ice,” he said. “If you do have to get out on the roads at all, you should drive slowly. Allow for extra stopping distance. Decelerate slowly, and be aware of any black ice on the roads.”