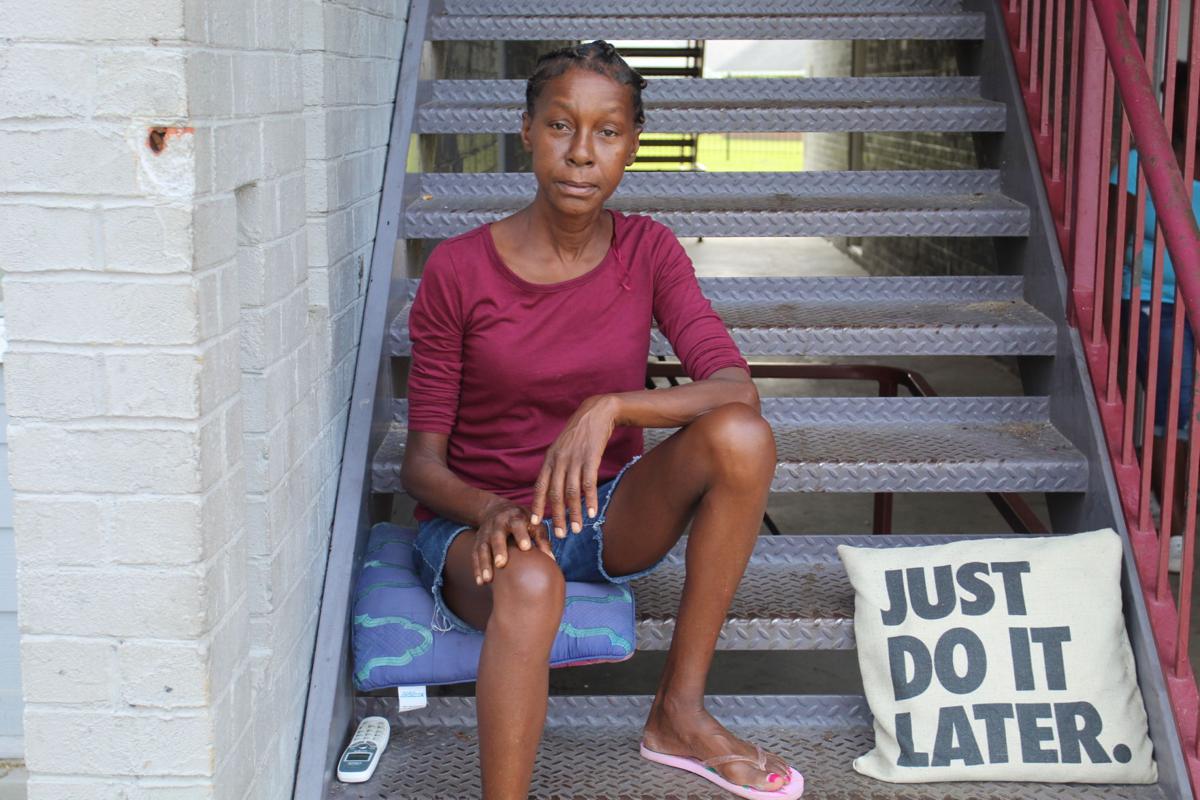 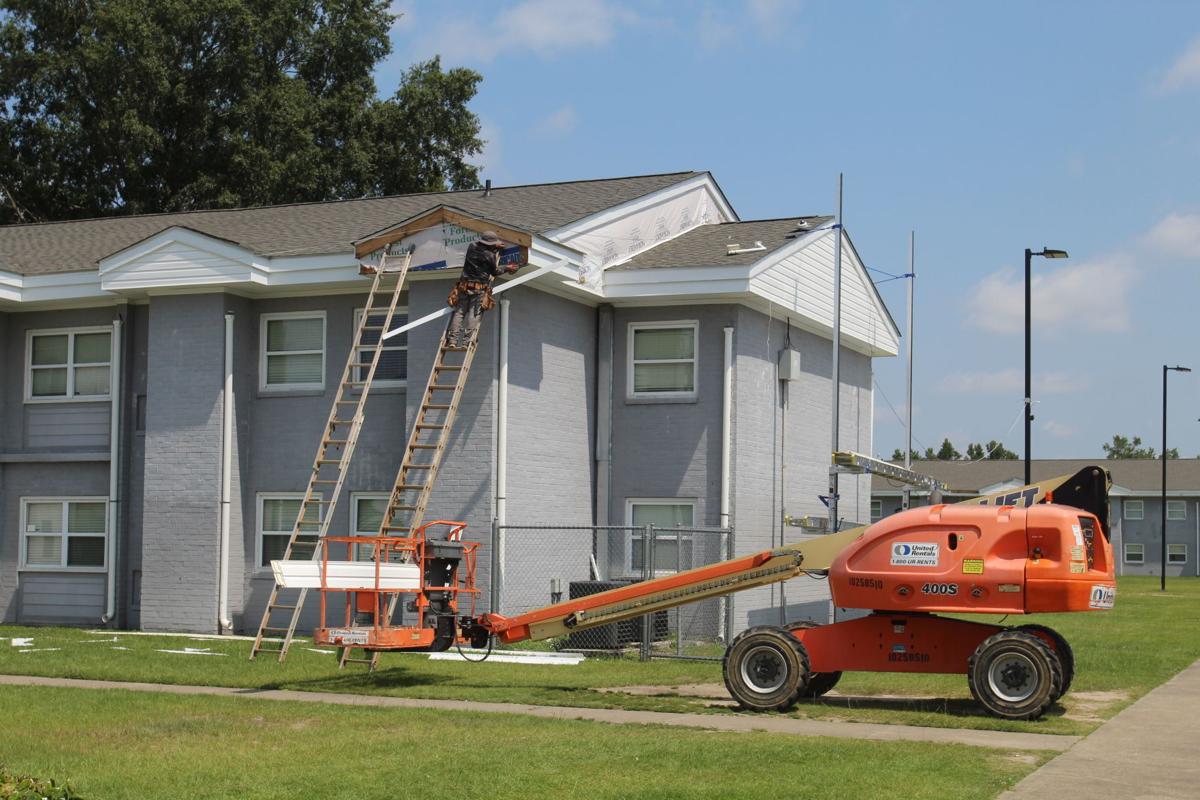 A worker stands on a ladder to make repairs to an apartment building at The Grand at Day Point. 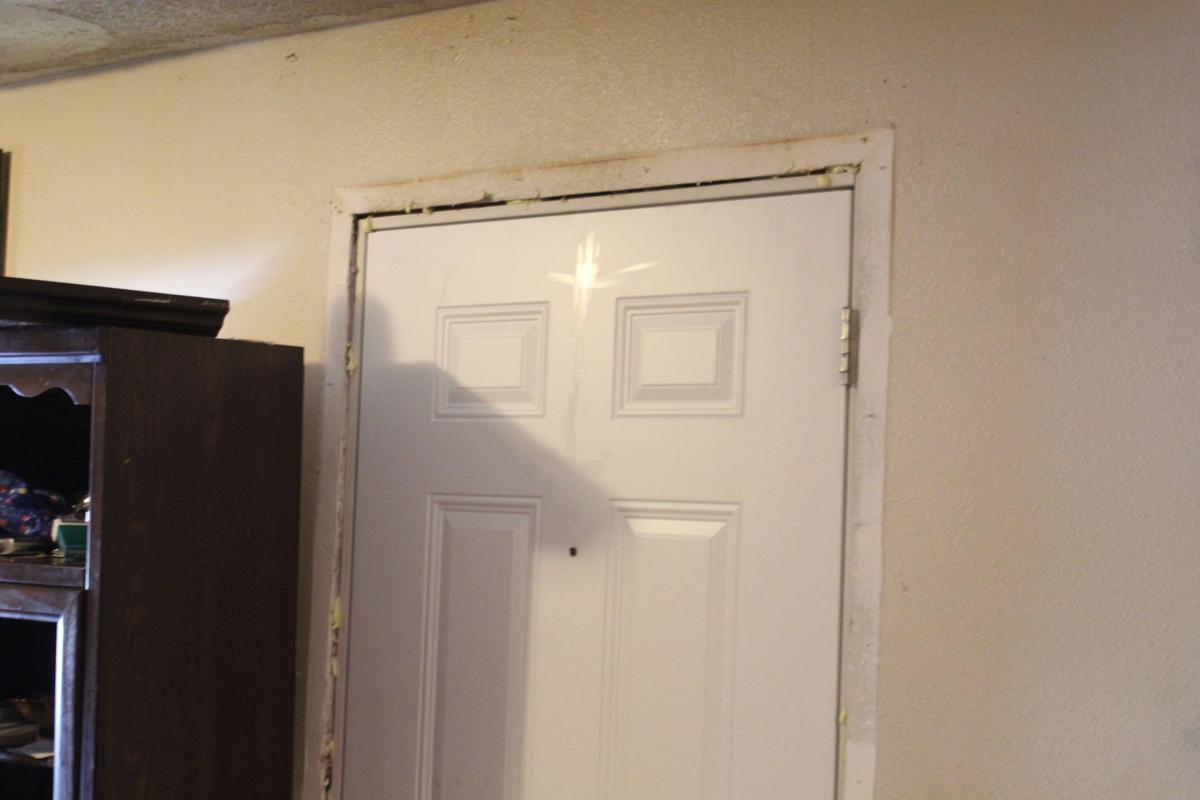 A worker stands on a ladder to make repairs to an apartment building at The Grand at Day Point.

Saw dust, bed bugs, exposed wiring and doors with holes and cracks are some of the concerns voiced by residents living at The Grand at Day Point that is undergoing a $14 million renovation project.

Residents spoke during the Goldsboro City Council meeting Monday, detailing some of their concerns, including being displaced and having to share storage containers with their neighbors.

In March, the Goldsboro City Council approved the issuance of up to $14 million in multi-family housing revenue bonds for the project that involves renovating 160 apartments at the complex in Day Circle, off South Slocumb Street.

GDP Housing Partners in Raleigh is selling the city-issued revenue bonds to investors. The municipal bonds guarantee repayment from revenues generated from the project that is planned to include $45,000 in renovations per unit.

Since work officially began in May, residents say they have been displaced with nowhere to go during the day, except hospitality rooms, which can get crowded, on the property.

“You have up to five to six families in this one area to sit,” said Rose Dudley, a Day Point resident, during the meeting. “(Management supplies) two community rooms at the rent office for these families to go in and sit (from 8 a.m. to 5 p.m.) if they don’t have anywhere to go.

“If I’m in a community room with three, four, five, six family members, they shut off the bedrooms and the only place that you can sit at is in one big room with all these families. When I first moved in this complex three months ago, when I signed my lease, (management) stated to me that they was going to do renovation and they was going to relocate us to a facility.”

Dudley works during the day and evening, which has created problems, she said.

“If you work overnight, you have nowhere to stay to sleep and get dressed and be comfortable,” Dudley said.

Dudley said residents are not supposed to be in their apartments while work is being done on their units.

“What are we supposed to do?” Dudley asked the council.

She also said she just wants to be treated right.

“And I don’t think that’s fair to us and because we live in a subsidized apartment complex don’t mean that you have to treat us that way. We are still human beings.”

Shameka Rawls, who also lives at The Grand at Day Point, expressed concerns to council about bed bugs and how the property management group, Multifamily Select Inc., which is based in Matthews, is making residents share a storage container with their neighbor during a pandemic and at a time when the complex has bedbugs.

“The reason I complain about the PODS (storage containers) is because we have a lot of bed bug outbreaks,” Rawls.

Rawls has three daughters who have asthma and between working side jobs, she said there’s nowhere for her girls to go when they get out of summer school early in the day.

That isn’t her only issue, though.

She told the City Council that workers have also broken her furniture, something Dudley also said also happened to her.

Mayor Pro Tem David Ham told the residents who spoke during the City Council public comment period Monday city officials would follow up on their concerns.

“I’m very disappointed with what you’re telling me,” Ham told Dudley. “What I would like to do is have our city manager contact the housing authority or the owners of the organization and get them and their construction superintendent in here for a meeting if we can talk about these issues. We will follow up on this, I can assure you.”

On Friday morning, Barbara Mewborn, a Day Circle resident, sat on the steps of her apartment building, frustrated by what she deemed to be shoddy work after her door was replaced. She has other concerns about the condition of her apartment.

She said not much has been finished on her apartment.

“I like the new appliances but other than that, I’m not really seeing too much of nothing except promises,” she said.

Mewborn also is concerned about sharing storage units with neighbors.

“I don’t feel like I should have to share a POD with anybody for my furniture to go in,” Mewborn said. “I don’t know what they’ve got in their house but I know what I’ve got in mine.”

“They don’t give us a date,” Mewborn said. “They come up here like a day before.”

Deborah Lamm, who also lives at the complex, is also concerned because she said she has no money for a hotel and has until July 30 to be out of her apartment.

“I’m disabled and I box my own stuff up and I feel like I ain’t got no help,” Lamm said.

Shannon Cobb who recently moved to Day Point said she understands that work needs to be done but has concerns about how other residents are being affected.

“I guess they’re trying to make improvements but I guess the way they’re going about it is a problem here because they make people get up in the morning,” Cobb said. “They tell you to leave and you can’t come back until after a certain time and there’s people that got kids, they don’t have money, they don’t have places to go. I’m fortunate. I have a place to go while they’re doing this here but everybody is not, and I don’t have children so it’s easier. It’s just me. I can pick up and just ride out for the day but a lot of people can’t do that.”

“They had money in the budget to give the residents stipends to soften the blow of inconvenience of the actual rehab,” Calloway said Friday.

Calloway said complaints raised by residents at The Grand at Day Point are news to him and that he was in the dark.

Calloway said residents living at The Grand at Day Point have had property damaged.

“I’ve had three people that have had something damaged while it’s being moved in their house,” Calloway said. “Of course, that goes to the contractor. They have a contingency in place to reimburse residents if something like that happens.”

He touted the hospitality rooms and amenities offered to residents while they are being displaced from their apartments.

“There’s three hospitality rooms that are set up as apartments with 65-inch televisions, internet, food, anything that a person would need during that time frame,” Calloway said.

Overall, he said he is excited about how work is being done and said the project is on schedule to be completed in December.

“It’s just a huge positive for the complex and the city of Goldsboro that a complex that has in dire need of a renovation is getting it,” Calloway said. “And it’s beautiful what they’re doing. The work is beautiful.”

Tim Salmon, Goldsboro city manager, and Ham were not available for interviews Friday.