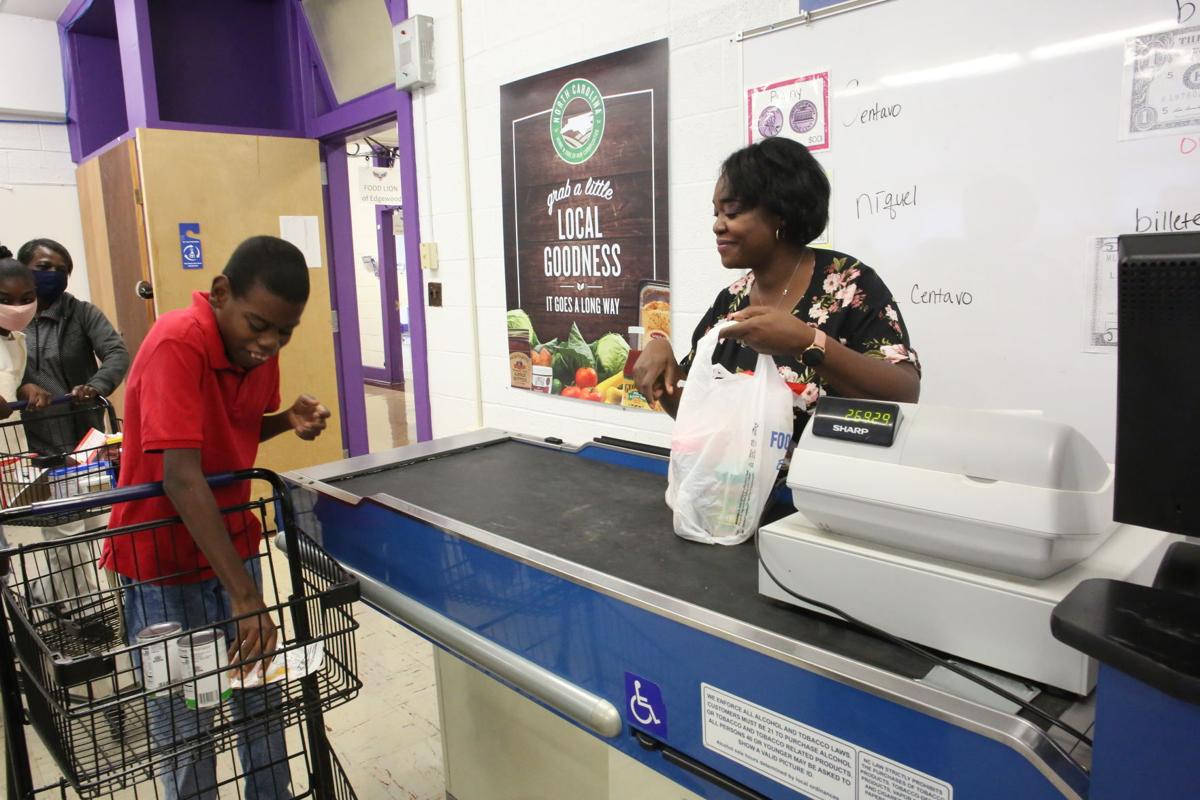 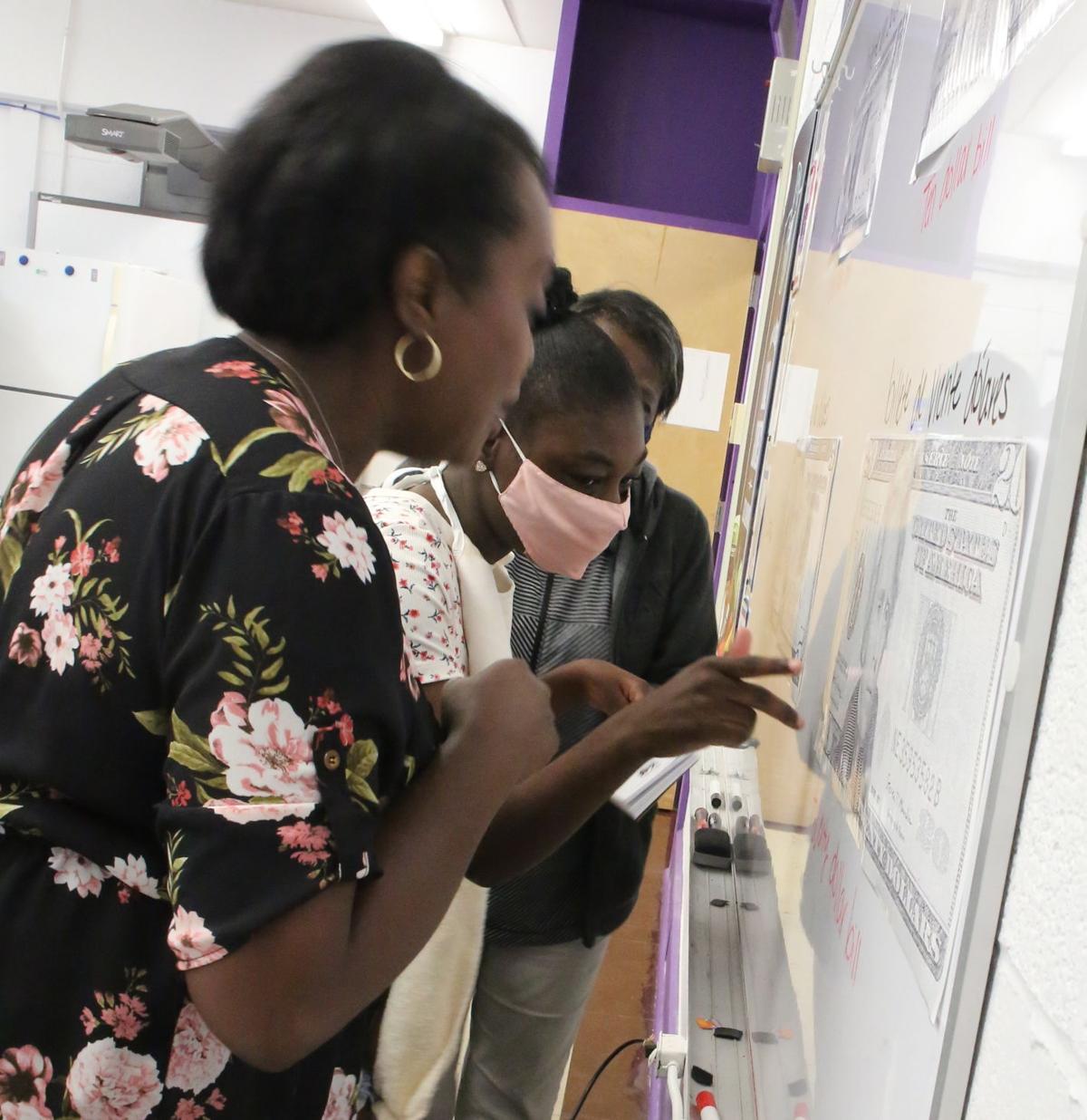 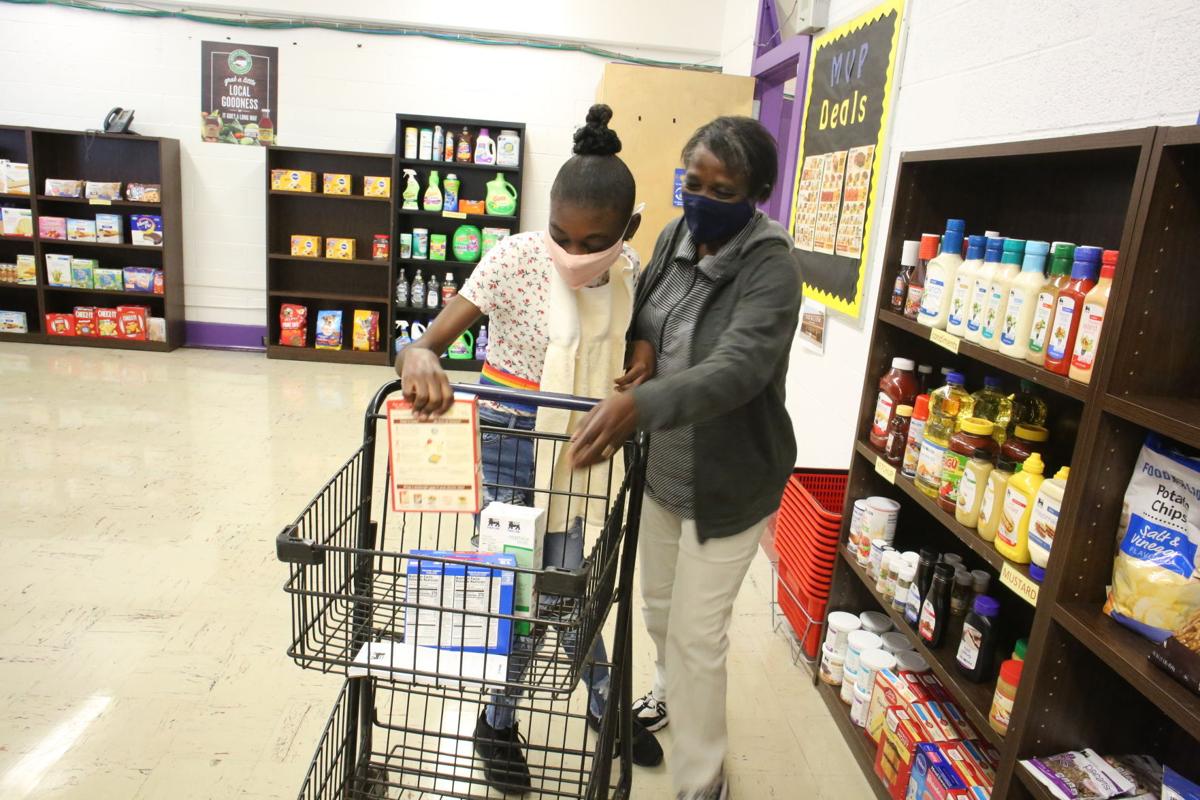 Jamiya Jacobs chooses a boxed cake mix from the mock store at Edgewood Community Developmental School for her dessert. Food Lion donated everything the school would need to set up the mock store, including gift cards to buy real food products to stock it. 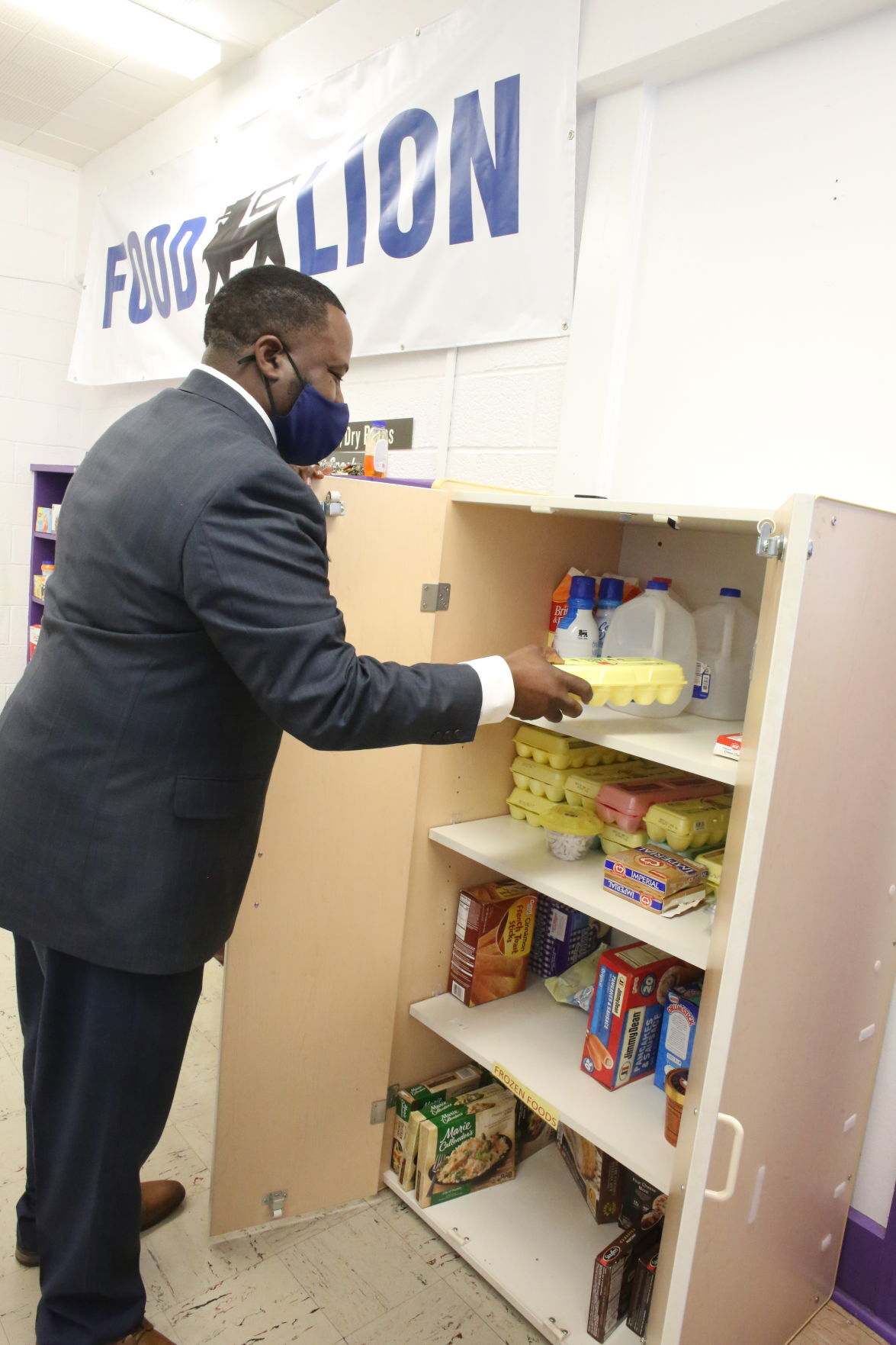 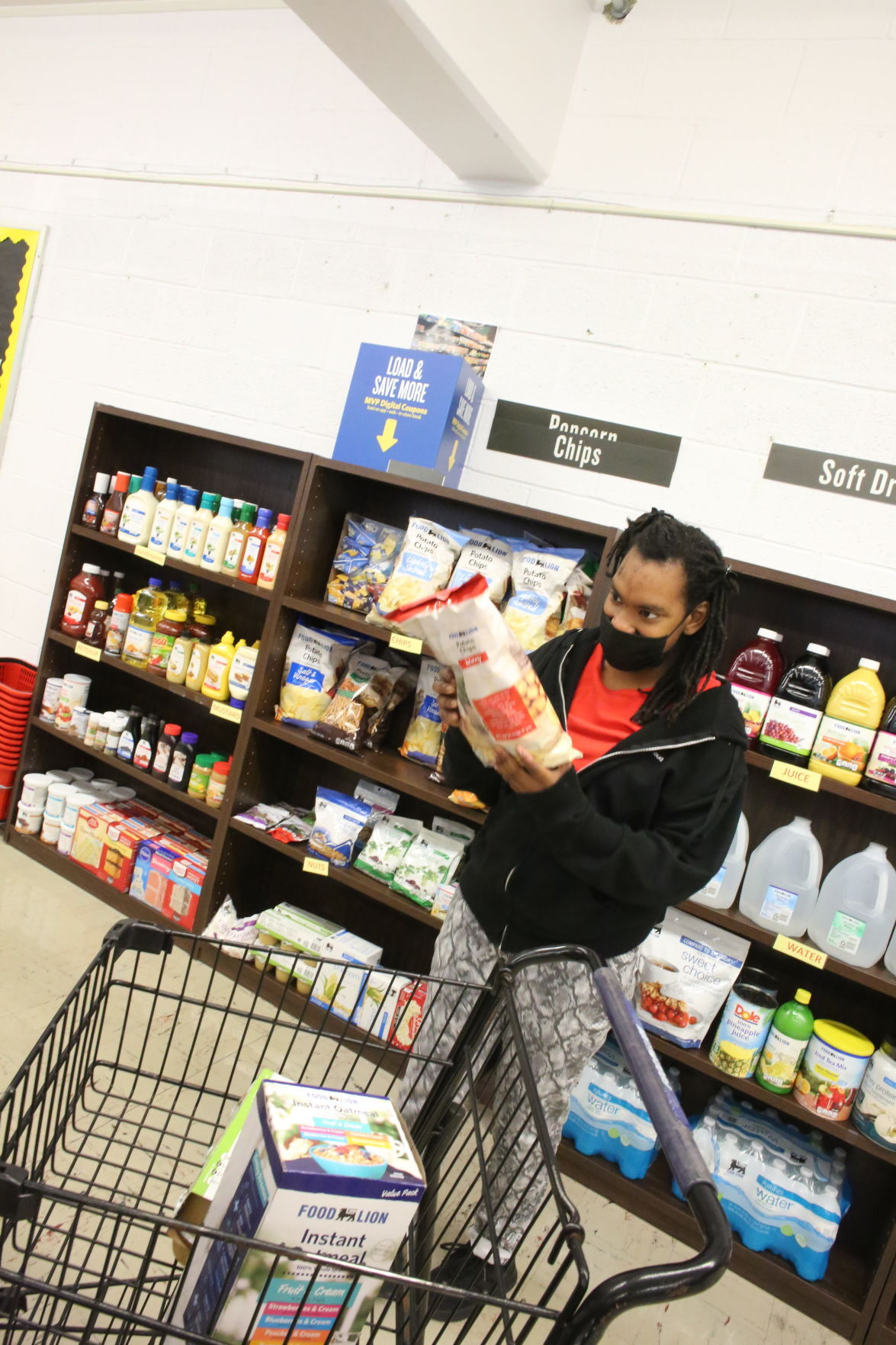 Gabrielle Strozier picks up a bag of chips for a snack at the mock grocery store at Edgewood Community Developmental School. 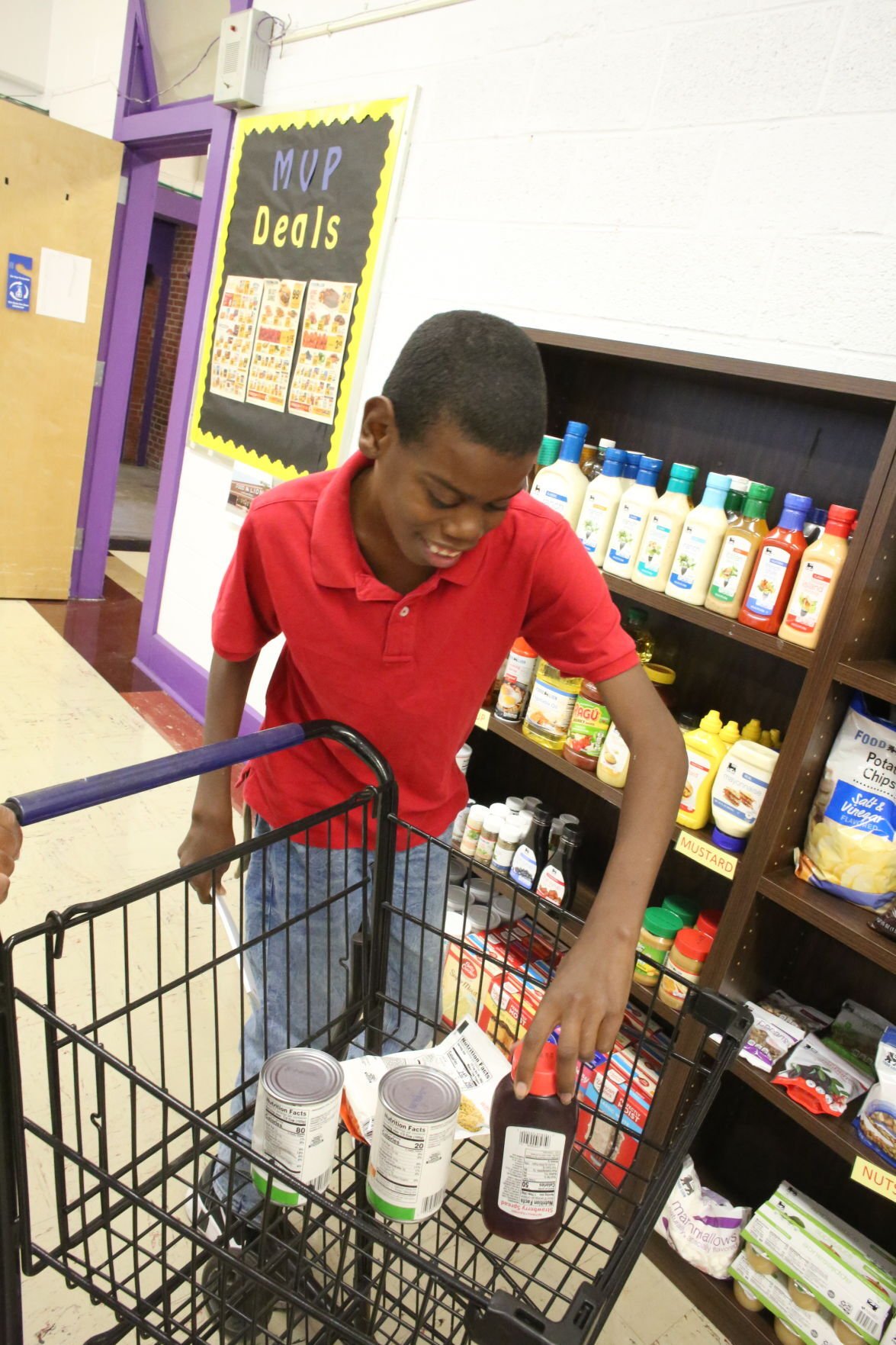 Jyquavion Jacobs shops in the mock store for ingredients to make his meal.

Jamiya Jacobs chooses a boxed cake mix from the mock store at Edgewood Community Developmental School for her dessert. Food Lion donated everything the school would need to set up the mock store, including gift cards to buy real food products to stock it.

Gabrielle Strozier picks up a bag of chips for a snack at the mock grocery store at Edgewood Community Developmental School.

Jyquavion Jacobs shops in the mock store for ingredients to make his meal.

Jyquavion Jacobs strolled through the aisles of the mock grocery store picking out items to make a simple meal, while Jamiya Jacobs was deciding what kind of cake mix and icing to get for her dessert.

They are both students at Edgewood Community Developmental School taking an elective course designed to help prepare them for life after school.

“When I came here, I knew that the school needed to be even more specialized in what we’re doing,” he said. “We are now in the beginning stages of operating Project 22 because 22 is the age that our students can no longer come to school.

“And my job is to make sure that our students have the skills to be prepared to go into adulthood.”

One of the new electives is The Food Lion of Edgewood, which is a mock grocery store where students pick out items for a dish they’re going to be making later. They even go through the checkout and tell the cashier how much money they will give her to pay for their purchases. They are accompanied by staff members who help them as needed.

The mock store is in two rooms of the school. The store was made possible by donations from Food Lion, Smith said.

The partnership between the school and the grocery store began about nine months ago, Smith said.

“I submitted a proposal to the corporate office in Florida,” he said. “I had a virtual meeting with David Hardee (Food Lion regional marketing manager) at corporate.”

Smith said Food Lion officials were excited to help with the mock grocery store at the school.

Hardee, who is based in Dunn, said the grocery store chain was optimistic when it received the request for help with the mock store.

“It was something we haven’t gotten too many requests for,” he said. “Our Food Lion partners in the warehouse, transportation, storage and equipment stepped up and showed support.”

To help the staff at Edgewood set up a mock store, Food Lion officials donated a real cash register and front-end checkout stand with a conveyor belt and scales.

“When I went to our equipment folks and told them what Mr. Smith was asking for, they said if they want a mock grocery store, we can also donate shelving units, magazine and candy racks and different signage,” Hardee said. “Then that opened the door, and we donated some gift cards to help stock the shelving units with Food Lion products. We also sent signage to help make it feel like a Food Lion.”

Corporate officials shipped everything through a Food Lion tractor-trailer, and school staff and volunteers installed it in the two classrooms.

On top of that, Food Lion also donated more than $1,000 in gift cards so the school could purchase actual Food Lion products to stock the mock store.

“They were really adamant about us filling our store,” Smith said.

The mock store is part of the course that will teach students cooking safety, menu planning, making a shopping list and preparing the food.

“We are giving our students what they need so they can be independent and successful,” Smith said. “A lot of our students don’t get the opportunity to go to the grocery store because of behaviors and overstimulation. Most of our students have sensory challenges.

“The main emphasis behind the mock store is to give the students the opportunity for others to teach them the correct behavior when they go to the store. And we (the school) will take them to the store and give them instruction, then they will be more prepared to go to the store with their parents without having unacceptable behaviors.”

“Working in a grocery store today will help our students with life skills so they’re able to be a little bit independent out in the community,” she said. “We’re giving them an opportunity to make decisions and choices.”

Ayers said the school staff talks with the students about how to put a meal together and how to identify fruits and vegetables. Staff also helps them understand the setup of a grocery store when they go into one, and that’s where the mock store comes in.

“It’s helping them so when they are going out in the community into a grocery store, it’s not unfamiliar,” she said. “They know where the different items are and what the differences are.

“We’re also working with money identification. We’re teaching them the difference between the dollars and coins and what it means to have money and to make a choice.”

Smith said everything in the mock store is set up so at the very least, even the students with the more severe cognitive conditions will be able to gain from just being able to communicate their choices. And for those students on the higher end of the scale, they will be able to go into the workforce using the skills they gained in the mock store.

“That independence is going to build their confidence, and they’re going to be more willing to learn more things,” he said. “It’s a focus on not looking at their disabilities, but finding out what their ability is.”

Jennifer Dupuis’ 15-year-old son, Jordan, attends Edgewood, and she worries about what will happen to him when he turns 22 and can no longer attend the school.

“These initiatives they have started here are going to help him be prepared for after he turns 22, going grocery shopping, selecting food, preparing the food,” she said. “At home, I have seen him transition some of the skills he’s learned here.”

She said through this new program and others at Edgewood School, the students will be better able to become an active part of the community.

“Another fear is what’s going to happen to my child when I’m not able to take care of him. Or what’s going to happen to him after I’m gone. This way, I’ll know that he’ll at least have something that he likes to do and has independence. It takes a lot of worry and a lot of fear away from me. That’s something you just can’t put a price on. It’s amazing what they’re doing here.”

Smith said the mock store will help the students because it teaches them how to make choices, acceptable behaviors in public, how to be independent and how to take a list and go shopping.

Hardee said he sees a lot of potential in the program at Edgewood.

“With the opportunity to really help build those essential life skills with something like this, I feel like it’s a great opportunity to help not only the current students but also the students that are coming up within the school to feel comfortable with grocery shopping,” he said. “I look forward to seeing the impact it has on the students.”

He said Food Lion personnel are getting a sense of pride helping with the mock store at Edgewood.

“I think everyone at Food Lion understood the weight that this carries and how unique the opportunity was,” Hardee said. “I think we get a lot of sense of pride around it. When I shared this with Food Lion retail stores across the state, it blew them away, too.”