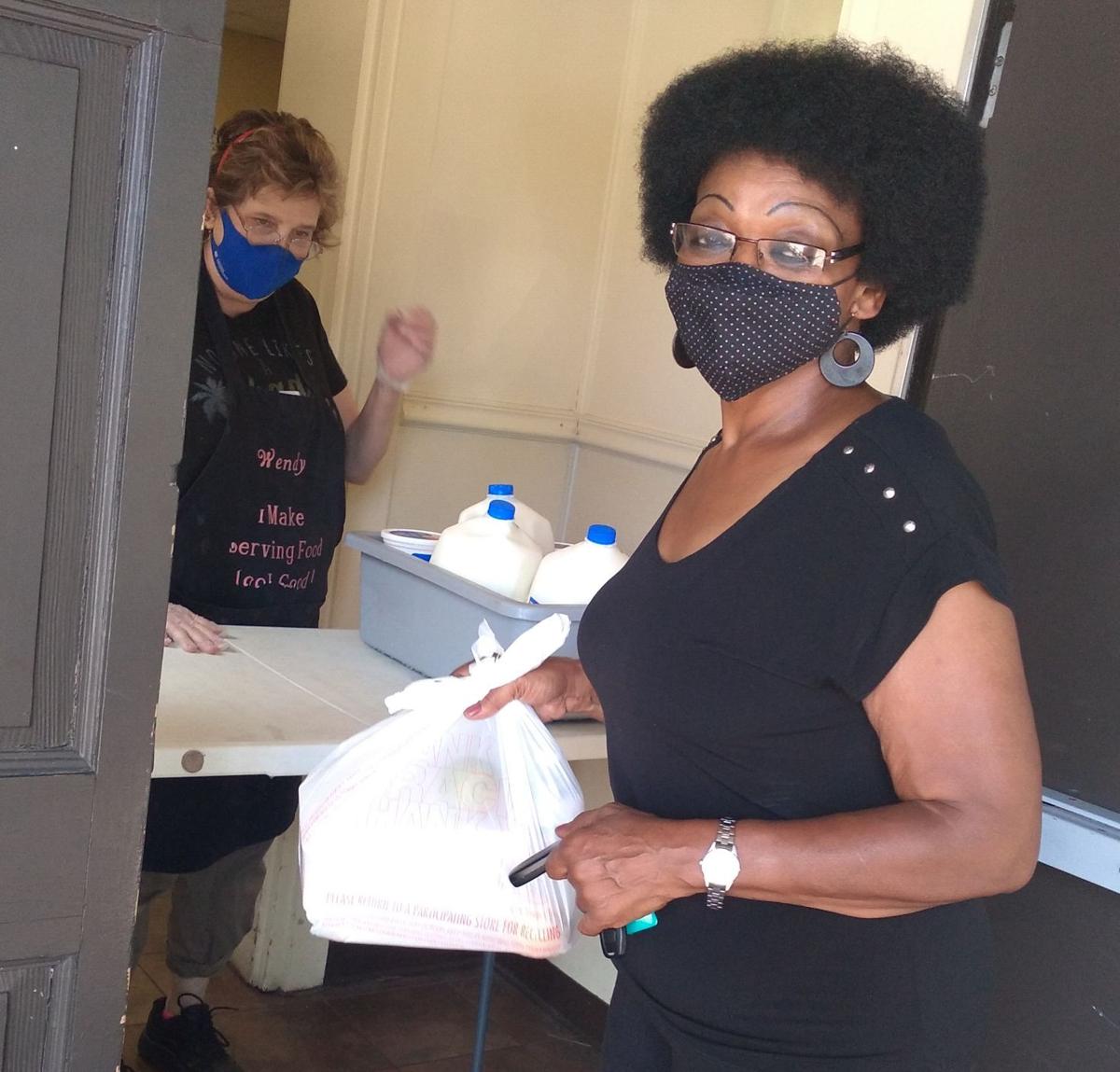 Above: Delores Williams, foreground, picks up a takeout meal at the Community Soup Kitchen of Goldsboro from volunteer Wendy Herron. The soup kitchen went to takeout only in March 2020. Left: Volunteers Aamir Castelino, left, and Wendy Herron pack meals for takeout at the soup kitchen. 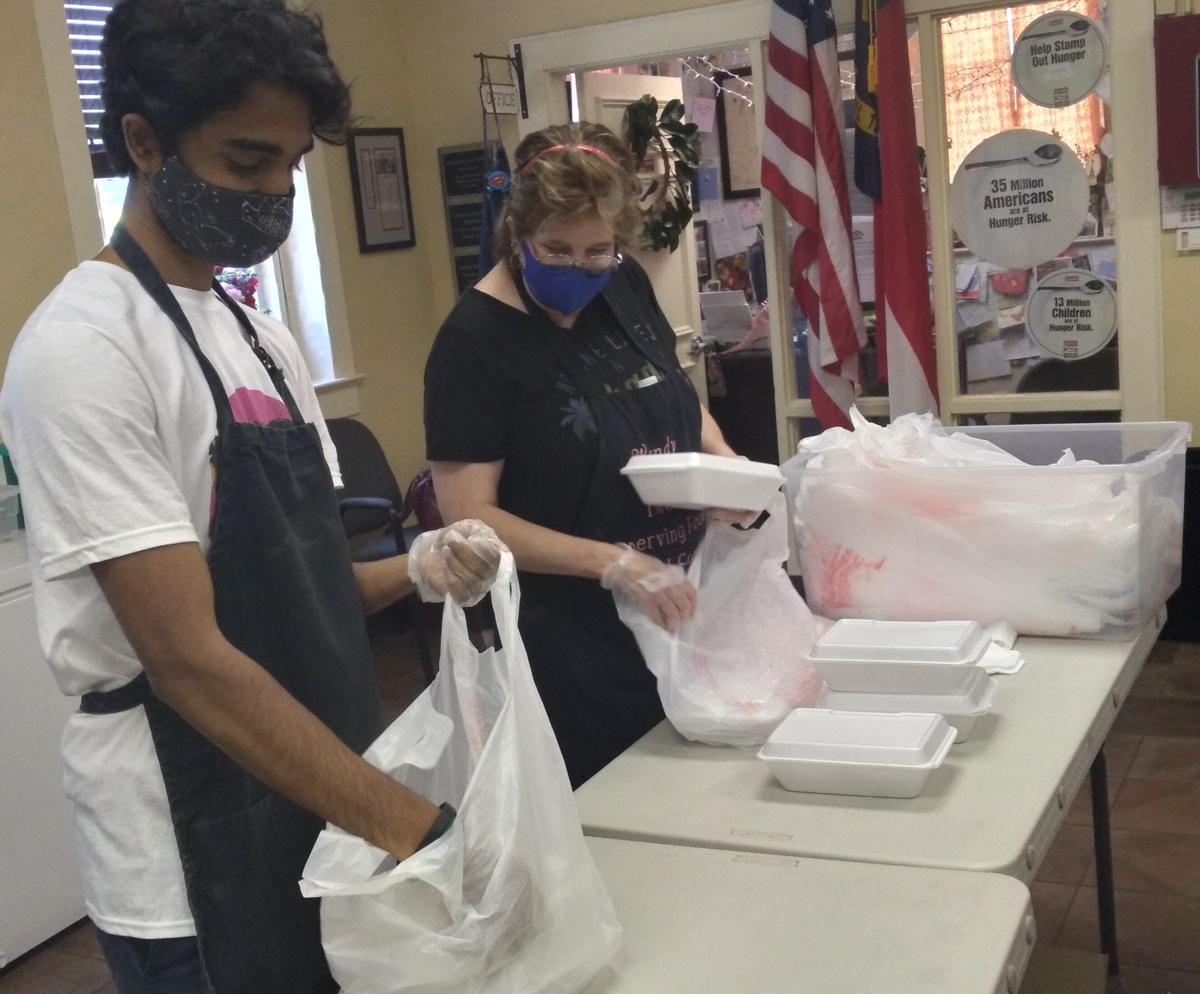 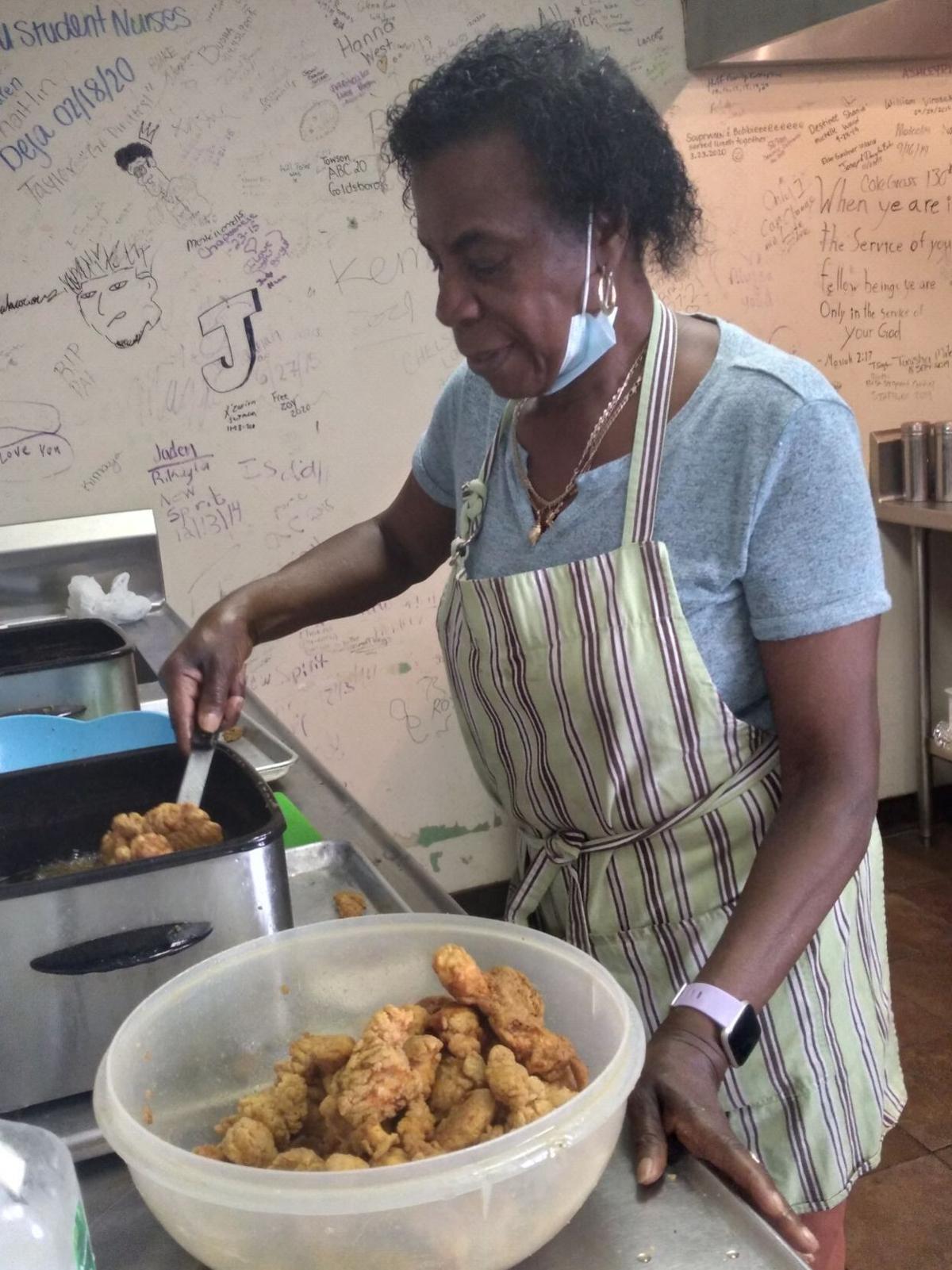 Soup kitchen volunteer Eldica Cyrus makes chicken nuggets for that day’s meal. She has been volunteering at the soup kitchen for 21 years. 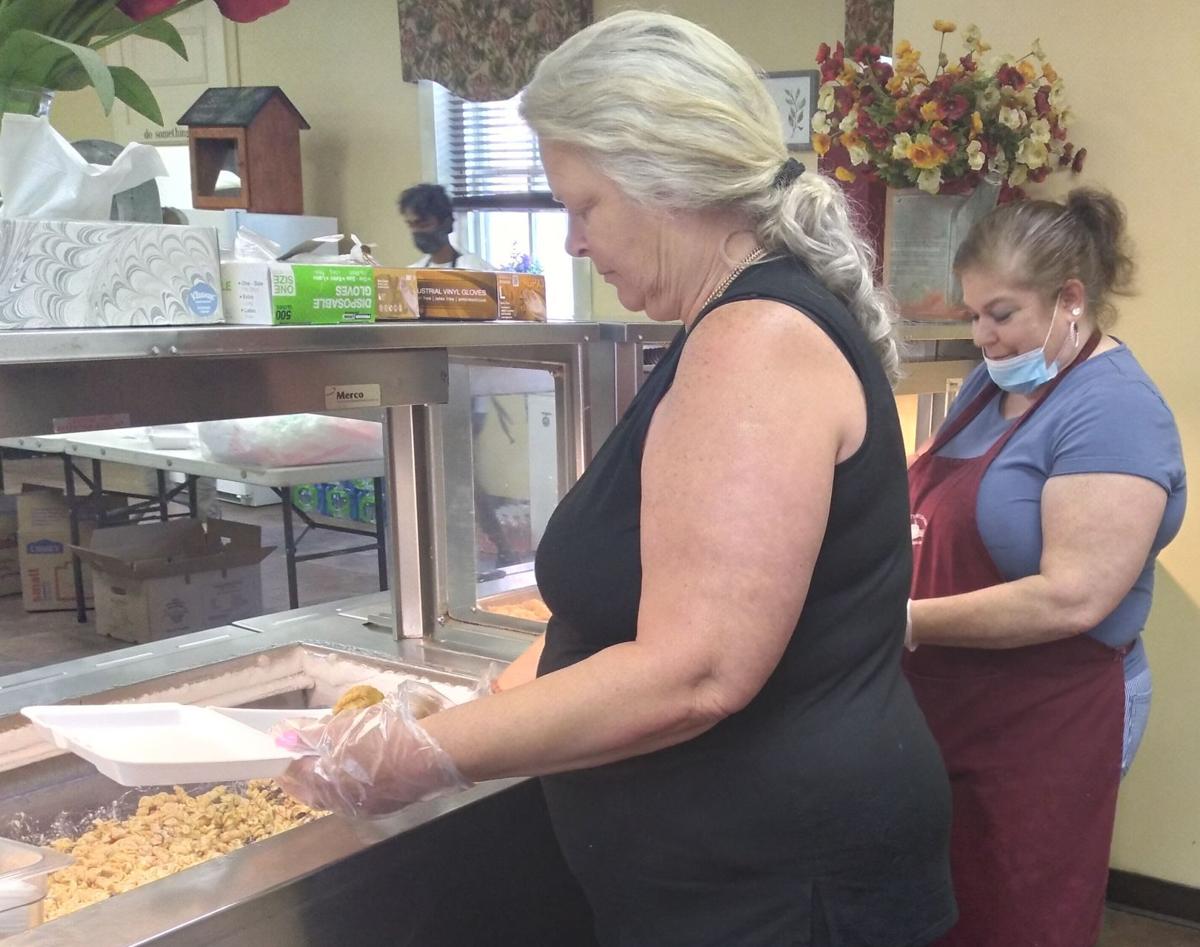 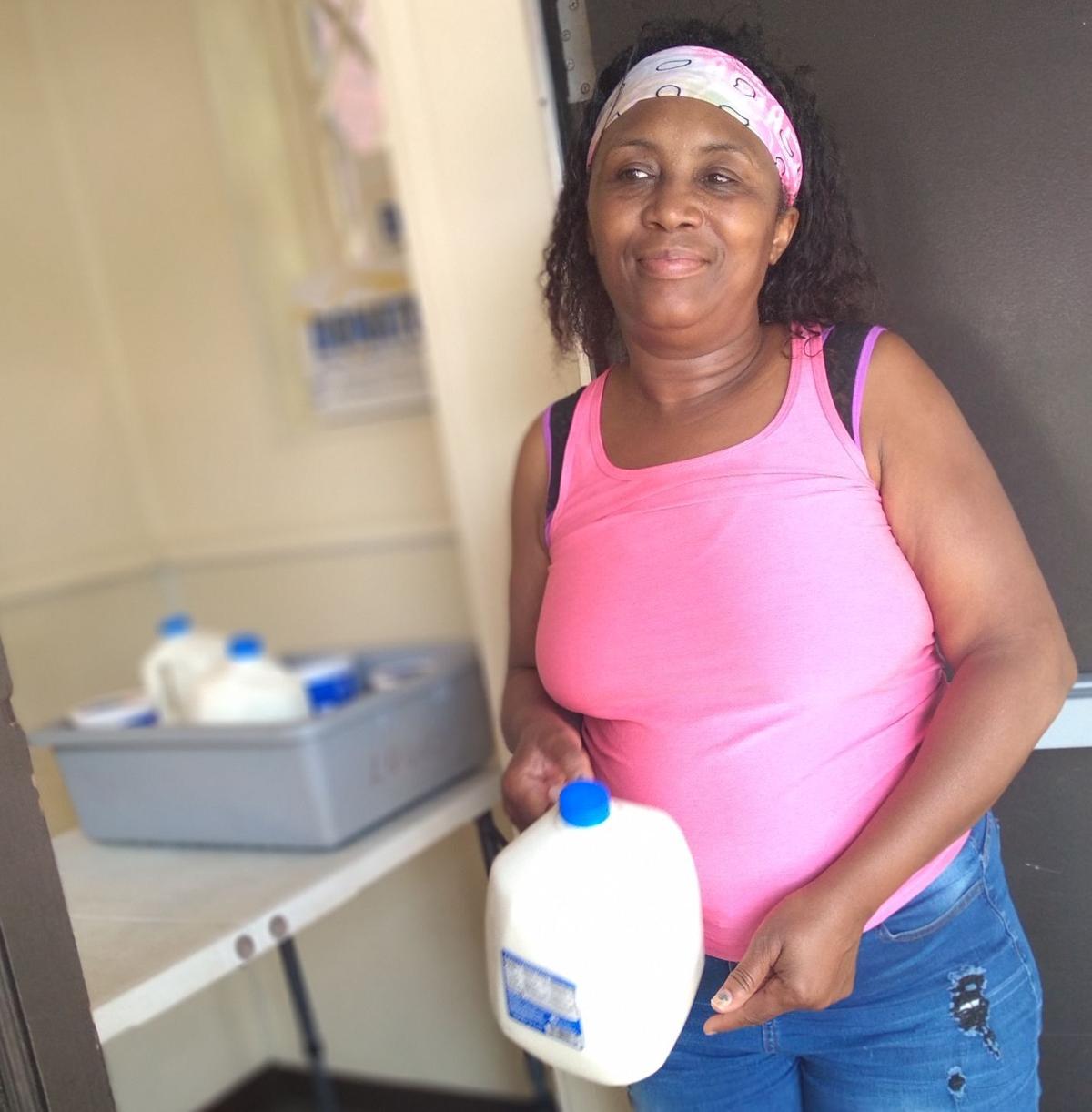 Melodee Hines picks up a gallon of milk along with her takeout meal at the soup kitchen.

Above: Delores Williams, foreground, picks up a takeout meal at the Community Soup Kitchen of Goldsboro from volunteer Wendy Herron. The soup kitchen went to takeout only in March 2020. Left: Volunteers Aamir Castelino, left, and Wendy Herron pack meals for takeout at the soup kitchen.

Soup kitchen volunteer Eldica Cyrus makes chicken nuggets for that day’s meal. She has been volunteering at the soup kitchen for 21 years.

Melodee Hines picks up a gallon of milk along with her takeout meal at the soup kitchen.

The pandemic may have changed the way the Community Soup Kitchen of Goldsboro operates, but it didn’t stop the staff and volunteers from serving meals to the needy.

Before the pandemic, people could go into the soup kitchen, sit down and eat their meal. But all that changed March 14, 2020. That’s when the soup kitchen went to takeout only, said director Doricia Benton.

“We are still doing takeout only,” she said. “I think maybe we need to go at least through the summer months with takeout. Then we’ll see what fall presents.”

Benton saw an increase in the number of meals served last summer. In the fall, that number dropped slightly, but now is steadily going back up.

“I think COVID-19 is a contributing factor, with people being unemployed, people being laid off, children being at home and not going to school,” she said. “We’d been averaging between 110 and 130 meals a day. Now we’re up to almost 200 a day. We’re seeing a surge in meals again.”

Benton said that number is likely to go up even more with children getting ready to be out of school for the summer.

“I think it’s going to be a large number that we serve again this year,” Benton said.

She said a lot of different people come to the soup kitchen to eat — senior citizens, single individuals both men and women and families of four, six, eight.

“We have picked up a lot of new friends in the past year,” Benton said of the people who eat at the soup kitchen.

But she sees regulars who come, too.

The soup kitchen was started Dec. 15, 1980, when several women at St. Stephen’s Church saw a need in the community.

“They took it back to the church members,” Benton said. “They gave them three months to show that this was a need that they could do and help at the church.”

The soup kitchen celebrated its 40th year in 2020.

Benton said the soup kitchen is very much needed here.

“Sometimes people need help,” she said. “When we think soup kitchen, we think homeless. It’s beyond the homeless. It goes into your working poor where they make an income, but they need this setting to supplement to get to the end of the month. They don’t make enough to live on.”

And that’s where the soup kitchen comes in.

“That’s why we are here, to help that individual, whether he or she is homeless or if they’re working,” Benton said. “A lot of people will come and they’re working and they have a job, but if they come and eat, then they can put gas in their car to go into work. Or get the medicine for their baby or their wife or mother or father.

“I think that’s what’s beautiful. The thing is we cannot judge people because we don’t know. It’s sad when you look at a distance at someone and because you see this or hear that, that you think

you know everything about them.

Benton said she misses her second family at the soup kitchen since it’s gone to takeout only for more than a year now.

“Sometimes they would just come in and sit down and just talk about nothing,” she said. “They just wanted to talk.

“I help them in many different ways during that meal hour, making phone calls for them or faxing something for them or helping them read paperwork or fill out paperwork. As far as I’m concerned, it’s so much bigger than the hot nutritious meal daily.”

Benton said people go to the soup kitchen to get some conversation, get out of the cold or heat or other reasons.

“But then after all of that, if they need me, I’m here,” she said. “If they need to use the phone, why not? Sometimes they’ll come here and say nobody will let them use their phone. Even during COVID-19 I’ve had them come in to use the phone to call a family member or get a ride. They’re small requests to me.

“If I can help them, if I have the goods or if I have the items, like a blanket or a toothbrush or a pair of socks, and they ask for it, I give it to them. That’s what we’re here for — to help, in so many different ways.”

The soup kitchen serves a nutritious hot meal Monday through Saturday from 11 a.m. to noon, and on holidays, too, unless a holiday falls on a Sunday.

“So we’re always here on Thanksgiving and most of the time on Christmas,” Benton said. “If we have a holiday like Easter, then we’ll celebrate on Saturday for Easter Sunday.”

The soup kitchen is funded through grants and donations from the community, individuals, churches, businesses and civic groups.

And those donations haven’t stopped during the pandemic.

“Our community is beautiful,” Benton said. “It’s just amazing when we shifted from plates to takeout. It is amazing that individuals, churches, businesses have wrapped their arms around us and helped us do what we’re doing with the daily takeout.

Benton said people in the community even made face masks for staff, volunteers and clients at the soup kitchen.

Not only do people donate food and items to the soup kitchen, but they volunteer to help prepare and serve the meals, although the volunteer base has shrunk a little due to the pandemic.

“My volunteers are wonderful,” Benton said. “Where I have a volunteer prior to COVID-19, and they would come like on a Wednesday or a Friday, now they’re coming two or three times a week and sometimes more.

“A lot of people have pulled away due to wearing the mask and having that uncomfortable feeling being in smaller settings. A lot of them are older citizens, and I can’t blame them for that. I’m sure when everything goes back to the way we want it to that they will be back.”

And Benton has just started bringing back, one at a time, community service workers who have gone through the court system.

She said although the soup kitchen has a lot of room inside, there could easily be 50 people at one time when the doors open.

“So that’s why I have to evaluate for safety reasons when it comes time to reopening for dine-in,” Benton said. “I can’t wait. I think we’ll have a big old party when that day comes. I want to have a celebration.

“It’s a blessing that we can still serve. I think the way we served our friends prior to COVID-19 was much more family to me.”

“We have to be safe for everyone, our friends that come and eat, our volunteers that come and help, our cook,” she said. “I have to look at everything and everyone.

In the meantime, Benton considers it a blessing that the soup kitchen never had to skip serving any meals.

One of those who has been eating at the soup kitchen for years is 61-year-old Delores Williams. In addition to the hot meal, she likes the fellowship, especially since she lives alone.

“This is a good place,” she said. “It’s a place where a whole lot of homeless can come for meals.

“God has touched these people’s hearts to help people like that, and that’s what we should do. The food is good, very good. I just want them to continue this great work and caring for the people.”

Melodee Hines, 51, has been eating at the soup kitchen about eight or nine years.

“I get a meal,” she said. “They’re very supportive, and they help with whatever you need.”

Hines said she’s missed being able to go inside, sit down to eat her meal and visit with others. But she’s thankful she was able to get the meals during the pandemic.

James Dawson is homeless, finding odds-and-ends jobs here and there sometimes. The 58-year-old has eaten at the soup kitchen for the past two years.

“I miss going inside and fellowshipping, too,” he said.

Dawson said if it weren’t for the soup kitchen, he’d have to panhandle to get enough money for a meal.