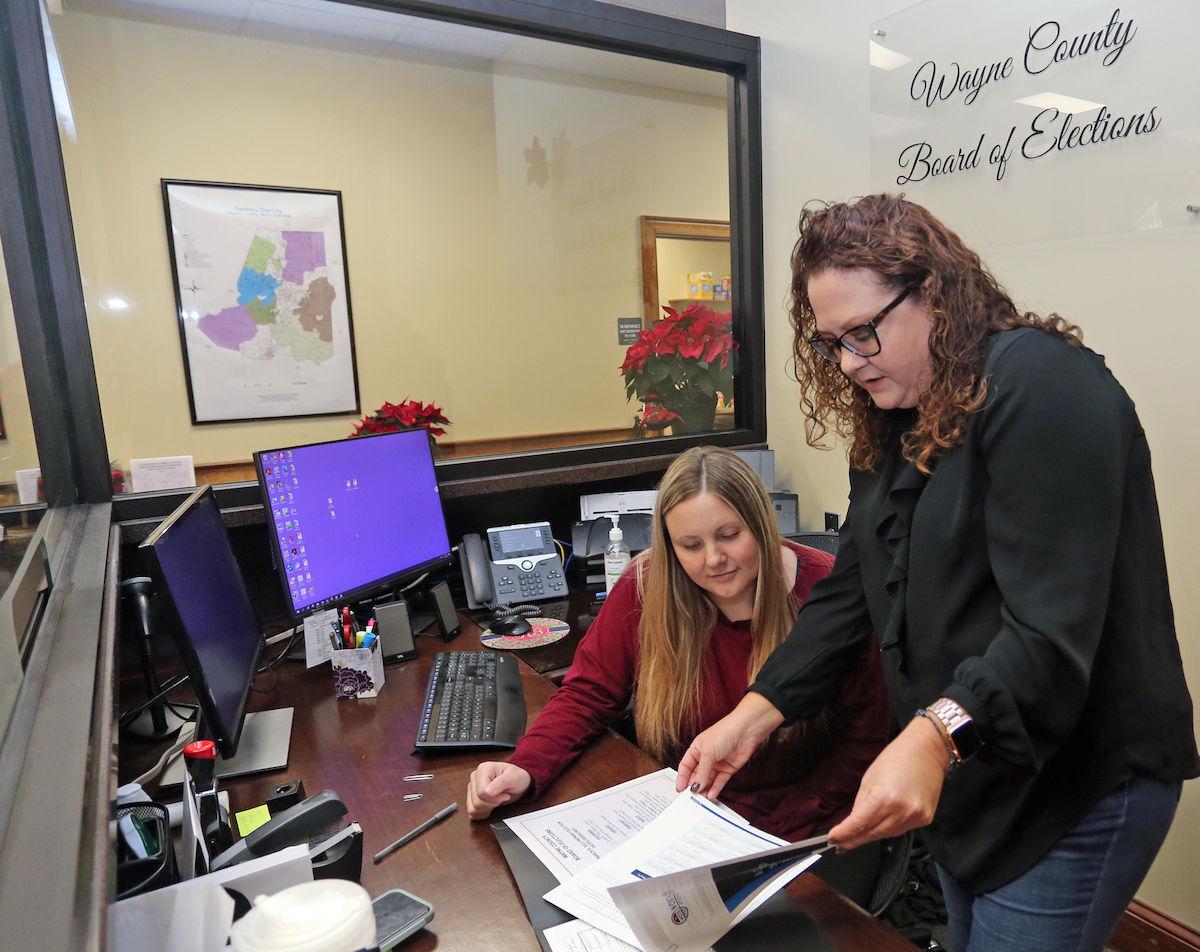 Wayne County Elections Director Anne Risku, right, and Amber Hinson, election administrator, review some filing guidelines in preparation of the start of the filing period for the 2022 mid-term elections that begins at noon on Monday. Even though the state’s new congressional and state legislative maps are facing court challenges, Risku said that until she is told differently she and her staff will continue to prepare for the filing period for the districts as they now stand. 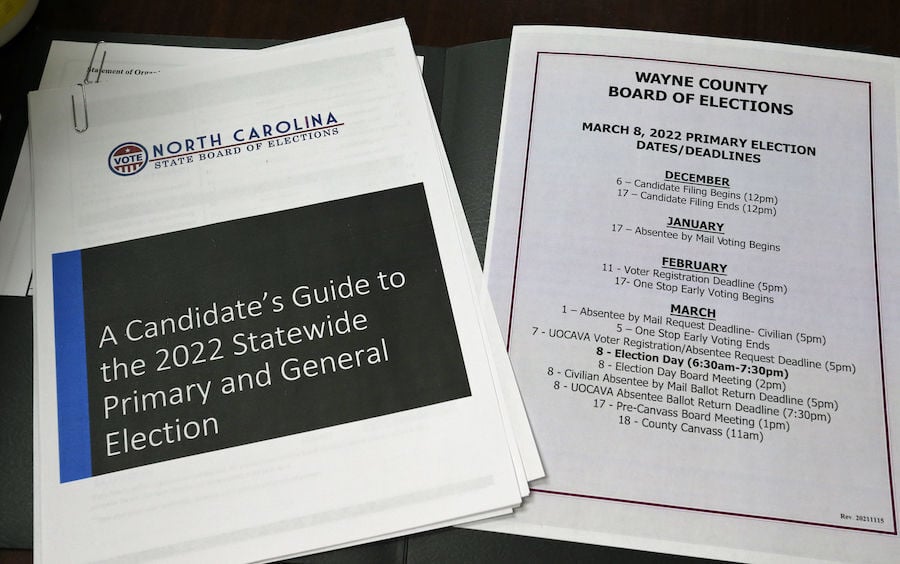 Filing for the 2022 mid-term elections gets underway at noon Monday and ends at noon on Dec. 17.

Wayne County Elections Director Anne Risku, right, and Amber Hinson, election administrator, review some filing guidelines in preparation of the start of the filing period for the 2022 mid-term elections that begins at noon on Monday. Even though the state’s new congressional and state legislative maps are facing court challenges, Risku said that until she is told differently she and her staff will continue to prepare for the filing period for the districts as they now stand.

Filing for the 2022 mid-term elections gets underway at noon Monday and ends at noon on Dec. 17.

When filing for the 2022 mid-term elections starts at noon Monday, congressional and state legislative hopefuls will encounter a drastically different political landscape in Wayne County.

Filing continues until noon on Friday, Dec. 17. The primary election will be held Tuesday, March 8, and the general election on Tuesday, Nov. 8.

New congressional and legislative district maps for next year’s elections are the result of the 2020 census that showed the state’s population grew by 9.5% over the past decade.

The growth was enough for the state to gain a 14th seat in Congress.

Drawn by the Republican-controlled state legislature, the maps are being challenged in court for being unconstitutional partisan gerrymandering designed to entrench Republicans while diluting minority voting strength.

The maps have survived their first court challenge, but face more.

However, Wayne County Elections Director Anne Risku said that until told differently, she and her staff will continue to prepare for filing to begin Monday at noon for the districts as they now stand.

“We are ready to go until we are told otherwise,” Risku said. “We are ready for Monday, and we expect it to be pretty busy. Everyone wants to file the very first day.”

People just need to be patient since there are two full weeks of filing, she said.

Perhaps the most dramatic changes in Wayne County wrought by the redistricting maps are that two House incumbents, who currently represent two separate districts, are lumped together in one district, while the current state Senate district has been replaced by a redrawn one.

A portion of Wayne County used to be in the 21st district along with a portion of Sampson County.

Under the new maps, the 10th district stretches from the Wayne/Wilson county line to just south of Goldsboro while the area south of that has been folded into House District 4 that also includes Duplin County.

Incumbent Republican Jimmy Dixon of Calypso has represented the 4th House District since 2011.

Prior to the new maps, Wayne County, along with part of Lenoir County, was in Senate District 7.

All of Wayne County is now part of the redrawn 4th Senate District that also includes all of Greene and Wilson counties. Incumbent Democrat Milton “Toby” Fitch has represented the 4th district since 2018.

On the national level, Wayne County is no longer in the 1st Congressional District represented by U.S. Rep. G.K. Butterfield.

Statewide, Richard Burr, one of North Carolina’s two U.S. senators, is up for re-election.

Some changes are to be found in the county’s board of education districts, too.

On the county level, Sheriff Larry Pierce, Clerk of Superior Court Justin Minshew and District Attorney Matt Delbridge are up for re-election.

Two 8th Judicial District seats are up in 2022, both for district court judgeships.

They are 8th Judicial District seat one that is held by Judge Beth Heath and the vacant seat five that had been held by Judge Erika James.

The only municipal election in 2022 is Mount Olive where the mayor and entire board face re-election. The board members and mayor serve two-year terms.

“It (town’s election) will be held March 8 during the primary election, but it will not be a primary for them,” Risku said. “It is their full election.

“It is important for people in Mount Olive to realize that their full election is March 8.”

The election is being held March 8 because the town’s election that would have been held last month was delayed because of possible redistricting.

However, the town’s population had not changed enough to trigger redistricting.

The town does not have the primary option in its charter, Risku said.

“So instead of waiting until November of 2021, they were told hold their municipal election until the next election which would be March 8,” Risku said. “They will have their primary choices (in the other races) as well.

“But at the bottom of their ballot they will have the town of Mount Olive (actual election).”