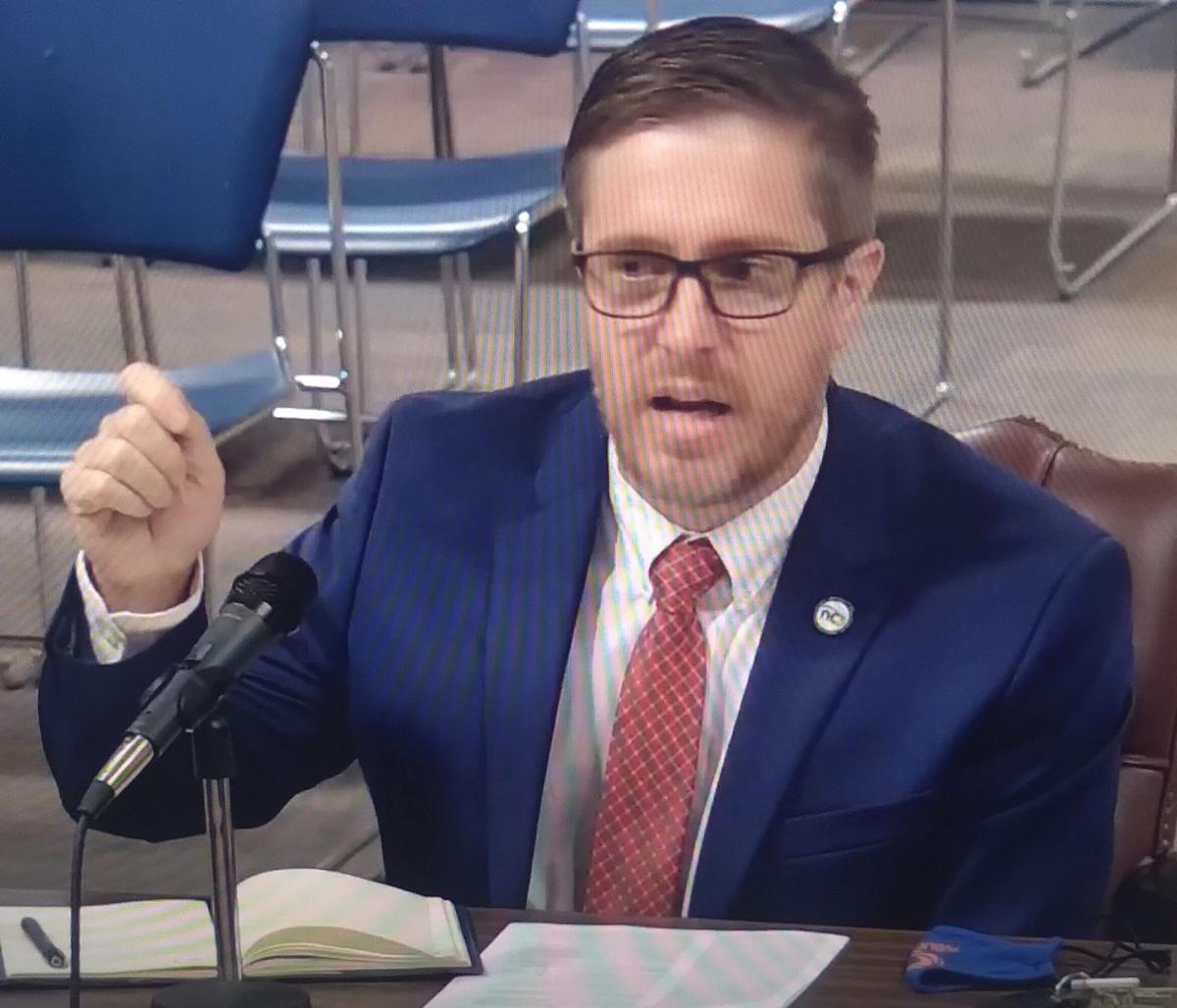 Craig Foucht, executive director of the Wayne Business and Industry Center at Wayne Community College, speaks during the Wayne County Board of Education meeting Thursday as part of the board’s interview process prior to appointing a District 5 representative. 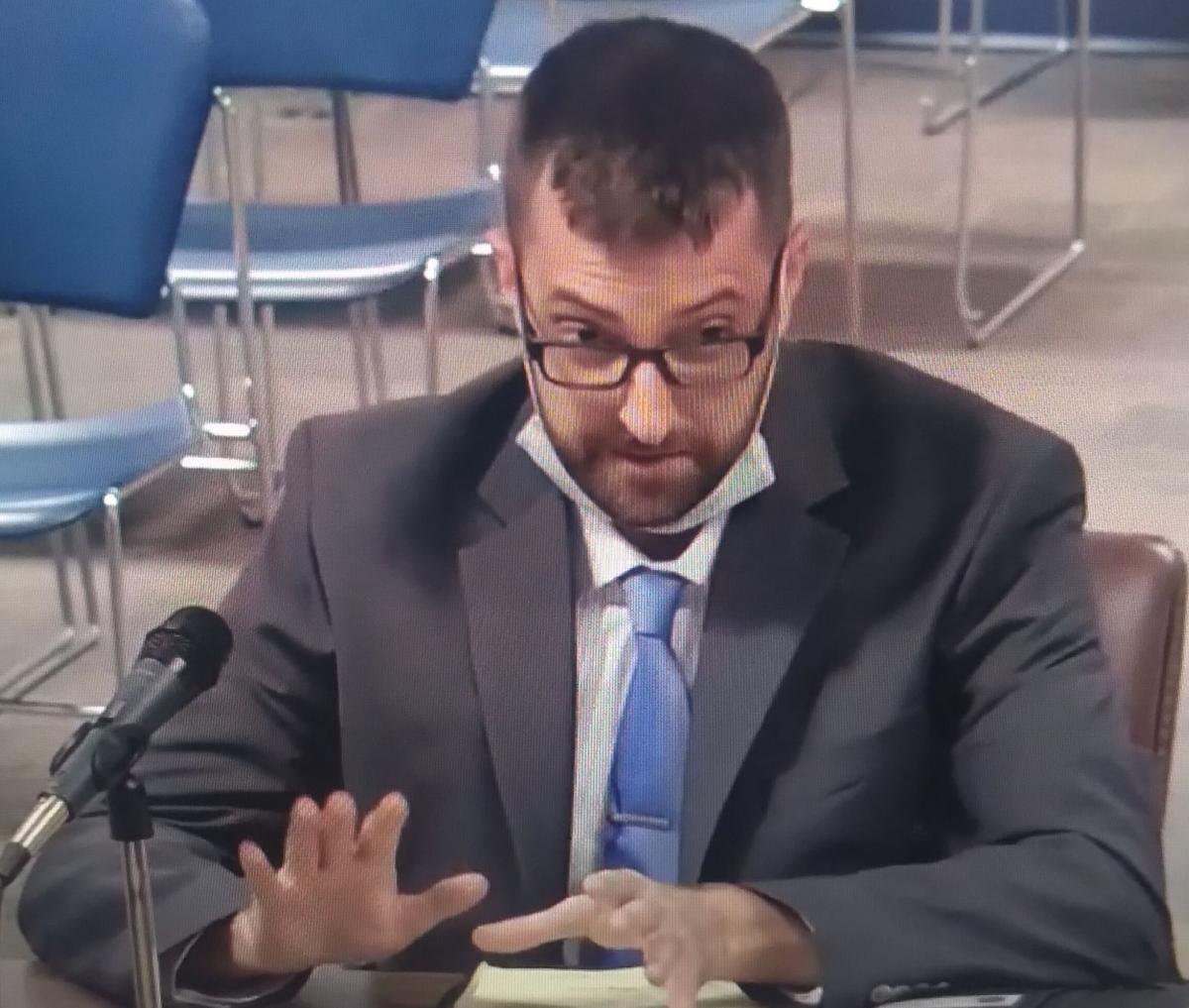 Phillip French, a Goldsboro police officer, one of two candidates for appointment to the Wayne County Board of Education, answers questions during the board’s interview process Thursday.

Craig Foucht, executive director of the Wayne Business and Industry Center at Wayne Community College, speaks during the Wayne County Board of Education meeting Thursday as part of the board’s interview process prior to appointing a District 5 representative.

Phillip French, a Goldsboro police officer, one of two candidates for appointment to the Wayne County Board of Education, answers questions during the board’s interview process Thursday.

After hearing from two candidates for the Wayne County Board of Education Thursday, board members voted 5-1 to appoint Craig Foucht to the vacant District 5 seat.

The meeting involved a set of questions by members of the board, who met to select a District 5 representative to take the seat recently vacated by Joseph Democko who resigned to care of his ailing mother out of state.

Foucht will serve the remainder of Democko’s term that ends in November 2022.

Henderson asked Foucht what he sees as the top challenges facing the schools today.

“The top challenges I see in the county and the state, number one, I believe would be funding,” Foucht said. “While I think state funding could help, the biggest challenge I think is that we live in a rural community that has a low tax levy. That low tax levy has got to go to provide a lot of services within our community.

“One of those services not only is education, but directly affecting education is going to be health care. So if we look at kids that are not getting good health care, and we’ve got to provide that through public health, those are going to show up inside the classroom also. We can’t just take money away from health care. We can’t take money away from law enforcement. And when you look at education, while I believe funding could help, I don’t necessarily know that funding is the full answer.”

Board member Tommy Sanders asked Foucht what he sees are the roles and responsibilities of the board and superintendent.

But Foucht said the board members should also be advocates for school staff, central office staff and any other of its staff.

Then the second thing a business is going to look at is the local workforce, Foucht said.

Foucht also told the board that his best asset is innovation.

“I tend to think of myself as innovative, with my ability to look at an adverse situation and see the positive in it,” he said.

West asked Foucht how the schools could communicate better with parents and get them more involved in their children’s education and school activities.

Foucht said he thinks there could be some additional social media presence, that people communicate in different ways.

“You’ve got to take so many different approaches when it comes to communication, email, phone, sending stuff home,” Foucht said. “But ultimately, I don’t think any one thing is going to reach all people.”

He said board members should be out in the community spreading the word in their districts.

Foucht also told the board that he would like to see the county target its students to keep them here.

During his interview, French said he feels the responsibility of the board is to make decisions that are in the best interest of the community without any coercion from a political party or outside of the community.

“Each board member should voice concerns of parents who can’t be on the board,” he said. “And make common-sense decisions that are in the best interests of the children and the education system.”

When asked if he could give the commitment of time needed to be a Board of Education member, French said he knew being on the board would require him to sacrifice some of his time.

“This would be my only board appointment,” he said. “I’m not involved in politics, and this board is structured not to be affiliated with politics. There’s no affiliation purpose when we’re deciding the future of our children and their education. My schedule’s wide open. I’m here, and I’m available.”

Sanders asked French how the Board of Education could communicate better with parents, and he answered, “It’s going to be a while before people get, I think, to the level they were to become physically involved (alluding to COVID-19). We’ve got to find a way to get them (parents) more involved.

“Right now, it’s a nervous time for everybody. I think we’re going to see a drastic improvement in involvement once we start getting ahead of this (COVID-19).”

French also told the board that his vision for Wayne County Public Schools is to continue doing a good job.