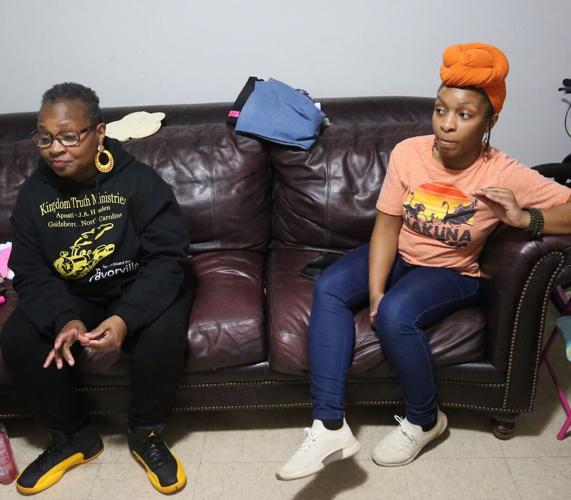 Valerie Jones, left, and her daughter, Khadijah Jones, talk about concerns regarding living conditions in public housing in the city. 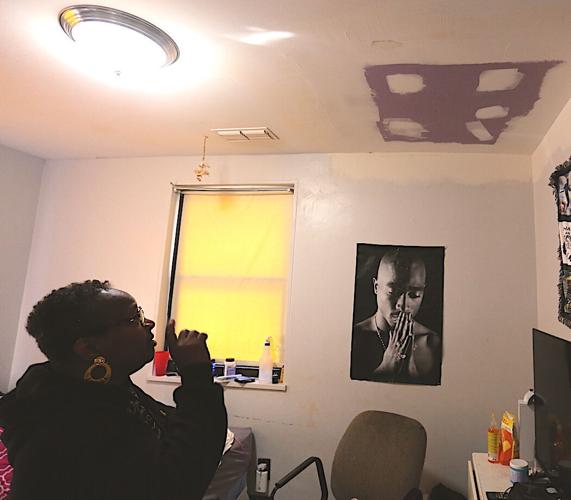 Valerie Jones points to a section of ceiling in her grandson’s bedroom Thursday at her daughter, Latarra Barden’s apartment on Denmark Street, showing where the ceiling recently had to be repaired. 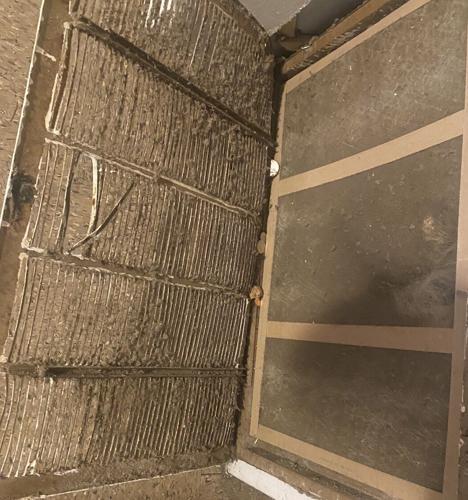 An air filter and air filter vent in Khadijah Jones’ previous apartment at North Taylor Street shows dust covering the filter and damage to its cover.

Valerie Jones, left, and her daughter, Khadijah Jones, talk about concerns regarding living conditions in public housing in the city.

Valerie Jones points to a section of ceiling in her grandson’s bedroom Thursday at her daughter, Latarra Barden’s apartment on Denmark Street, showing where the ceiling recently had to be repaired.

An air filter and air filter vent in Khadijah Jones’ previous apartment at North Taylor Street shows dust covering the filter and damage to its cover.

More residents living in Housing Authority of the City of Goldsboro public housing are speaking out about living conditions in their apartments almost a month after another HACG tenant raised concerns about conditions during a December meeting of the Goldsboro City Council.

Khadijah Jones is just the latest HACG tenant to voice her concerns, which center not only on what she calls poor living conditions but also what she alleges is a lack of response to tenant concerns by Goldsboro Housing Authority staff.

Jones voiced her concerns on Thursday at her sister Latarra Barden’s apartment on Denmark Street, which is in the Elmwood Terrace public housing neighborhood.

Jones said she moved in with her sister in late December after having lived at her previous apartment in the Fairview public housing neighborhood, on North Taylor Street, since December 2019.

“Prior to living there, I lived with my parents over on Ash Street,” Jones said. “They have their own place over there. They aren’t under the housing authority.”

Jones said that during the time she lived in the Taylor Street apartment that she and her children experienced a variety of problems, including mold forming in the apartment’s bathroom and kitchen, an infestation of mice, peeling paint on the ceilings, and an air filter completely covered in dust that blocked air flow through the apartment, which she alleged had been in the apartment since before she moved in and was never replaced by HACG staff.

All of the concerns Jones raised are matters that landlords, including those of public housing neighborhoods, are required to address under N.C. General Statute 42-42. The statute requires landlords, which include public housing agencies, to comply with municipal housing codes, keep utilities in working order and provide operable smoke and carbon monoxide alarms to tenants.

The last straw for Jones and her children came in June when the gas-powered furnace used to heat her apartment at North Taylor Street developed a leak, she said. Jones said the Goldsboro Fire Department staff responded and turned off the gas.

“They (the firefighters) said themselves it was a really high amount leak,” Jones said. “A new heater was finally installed in July 2022.”

Jones said the new heater was not installed until HACG staff had moved her and her children into what she called an emergency apartment. After being moved to the emergency apartment, Jones said she started looking for a new apartment and settled on one in the West Haven neighborhood, but has yet to move in there because management in the neighborhood has not addressed concerns she has listed with the residence.

Her mother, Valerie Jones, said the Denmark Street apartment where she lives now is in better condition than her previous Taylor Street residence, yet there are still some problems.

She said the primary concern with the apartment on Denmark Street centers on the ceiling in the room where Barden’s son sleeps.

“(Barden’s son) was in his room one night sleeping, and chunks of the ceiling just started falling,” Valerie Jones said. “It took more than three weeks for someone from housing authority to come fix it.”

Another concern raised with Barden’s apartment, according to Valerie Jones, is the apartment’s door. She said the door is not able to prevent anyone from breaking in. The door’s frame, handle and locks are not secure together and portions of the door are bent, preventing it from securely closing.

Khadijah Jones said she has reached out to the Housing Authority of the City of Goldsboro staff multiple times and the only way she has been able to reach them is either by email or by going to the agency’s central office at 700 N. Jefferson Ave. in person because no one answers the phone at the office.

“I went over there at one point last year and the lady at the desk actually said the number that’s on their website is old and they don’t even use it anymore,” Jones said. “She said someone had been trying to get the number changed, but it’s just been there ever since and that the number that’s there, they haven’t used it in a long time.”

The main telephone number at 919-735-4226 sends callers through an automated menu, which will guide callers to a voicemail box for a secretary for Anthony Goodson, Housing Authority of the City of Goldsboro chief executive officer.

Neither Goodson nor his secretary responded to voicemails left requesting comment for this article.

The concerns voiced by Jones and her mother came on the heels of comments made by Winter Goodson, Anthony Goodson’s wife, during the public comment period during the Jan. 9 Goldsboro City Council meeting.

Goodson said in her remarks that comments recently made by Councilwoman Hiawatha Jones and Councilman Taj Polack during previous council meetings about the HACG were lies and uninformed.

“I am ashamed of some of the members of this council,” Goodson said.

Goodson said comments made by Councilwoman Hiawatha Jones during council’s July 7 meeting about HACG tenants not having internet access were untrue.

Jones responded to Goodson’s comments a day after the meeting.

Khadijah Jones confirmed Thursday that HACG tenants have access to the internet, but the service is not free. She said HACG provided internet access to residents for free during the COVID-19 pandemic, but now it charges for the service. She was unable to confirm the cost of internet service to HACG residents.

Polack responded, saying he had reached out to HACG staff, including Goodson’s husband and only spoke with Anthony Goodson once. He said he has not received responses from other HACG staff members, despite repeated phone calls.

Polack’s initial comments about trying to reach Goodson and other HACG staff came during council’s Dec. 19 meeting, during which Natalia Newkirk, a Denmark Street public housing resident, voiced concern about the agency and its head.

Newkirk said Thursday, HACG staff has done little to respond to her concerns.

She voiced concerrn about mold growth, which prompted her doctor to send a letter to HACG asking that living conditions improve for the health and safety of Newkirk and her son. She said she also deals with roaches in her apartment and shared concerns about the living conditions other public housing residents are experiencing.

“I’m going to pay for my own (mold) testing of this apartment like I did with the last one I lived in,” Newkirk said.

According to Attorney General Josh Stein, if a landlord does not address concerns, such as mold testing in a timely fashion, tenants can either do maintenance themselves and ask for reimbursement from a landlord for the costs or sue landlords to force them to do maintenance.