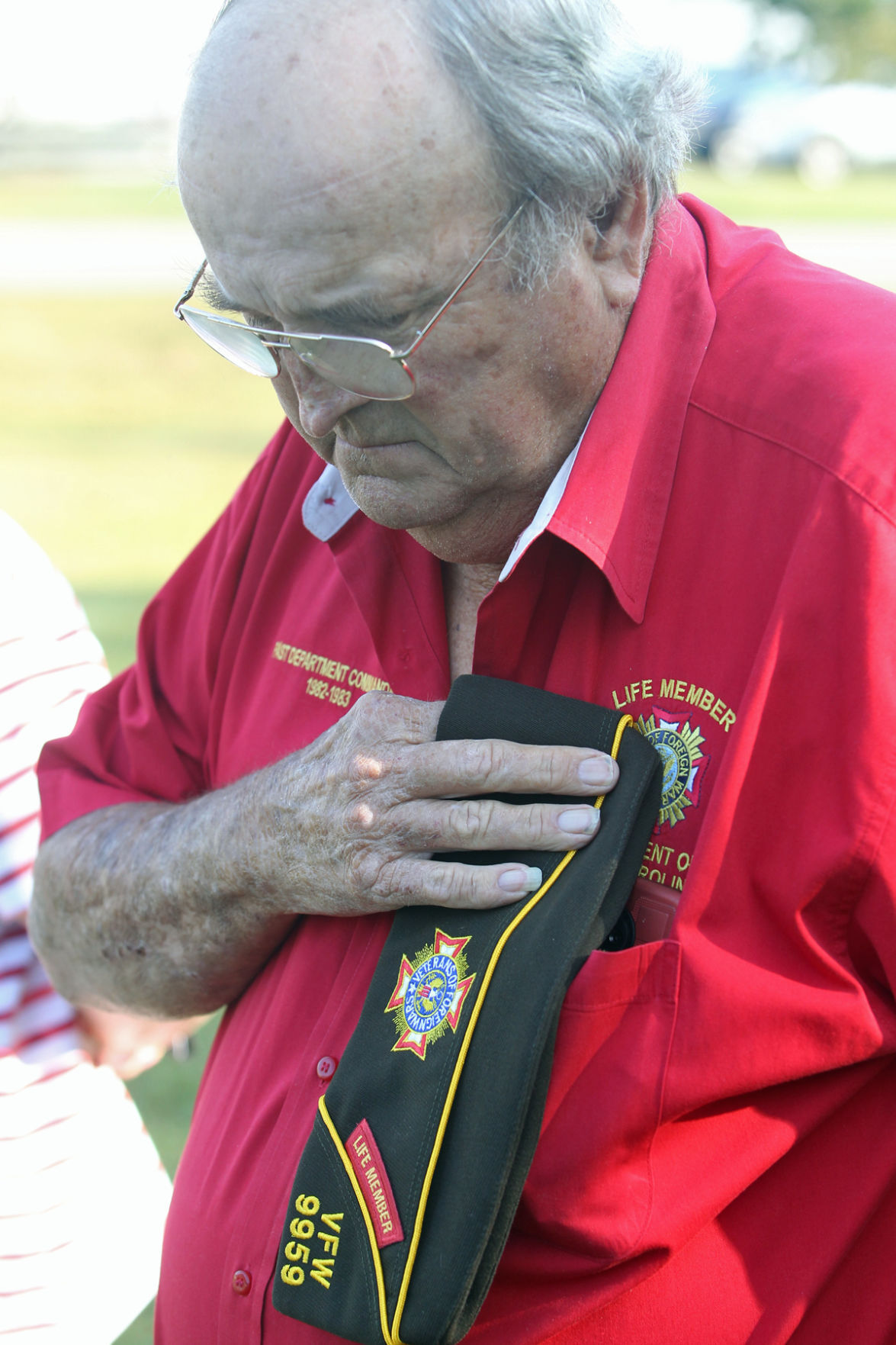 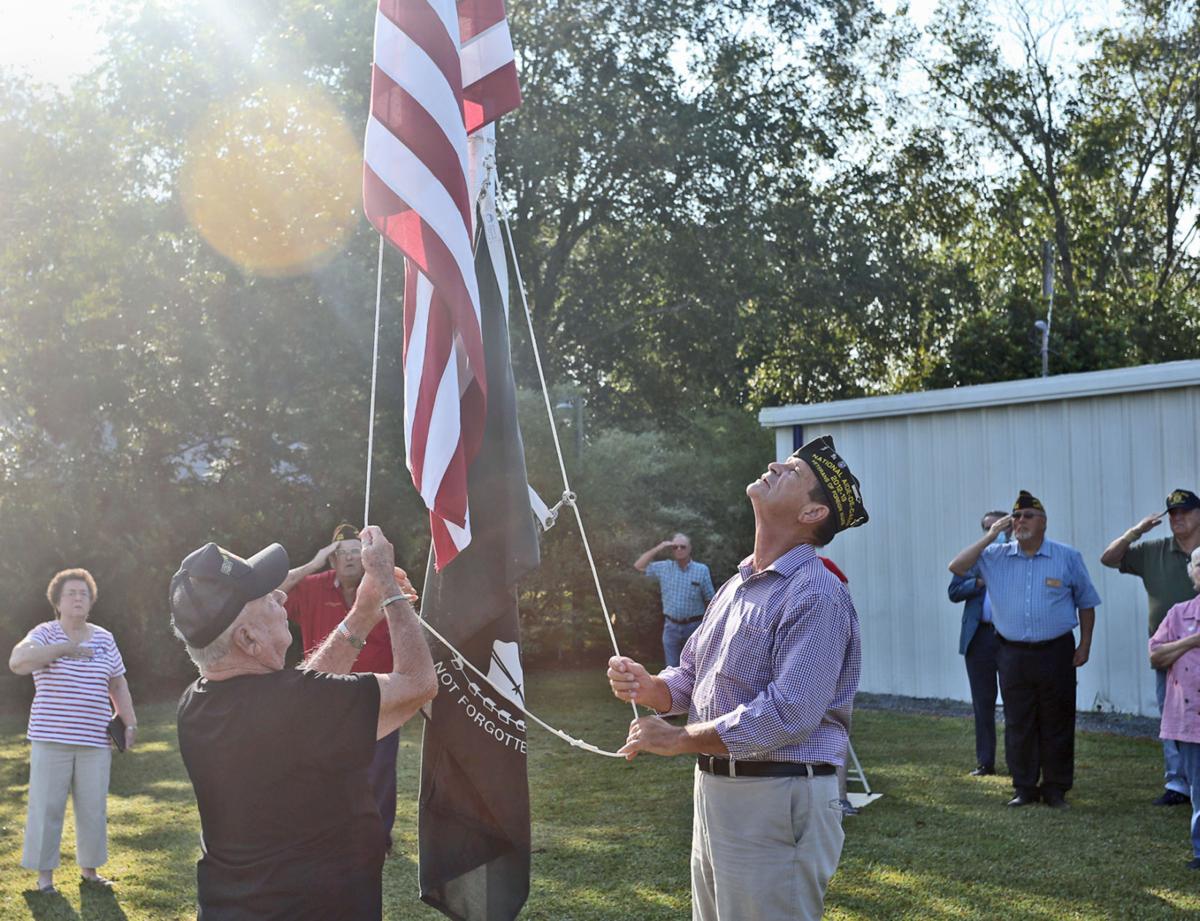 Mount Olive Veterans of Foreign Wars Post 9959 members Hugh Martin, left, and Ray Harrell lower the flag to half-staff Saturday morning while others salute or place their hands over their hearts during a 9/11 Remembrance Ceremony. The event was sponsored by the post and its auxiliary. 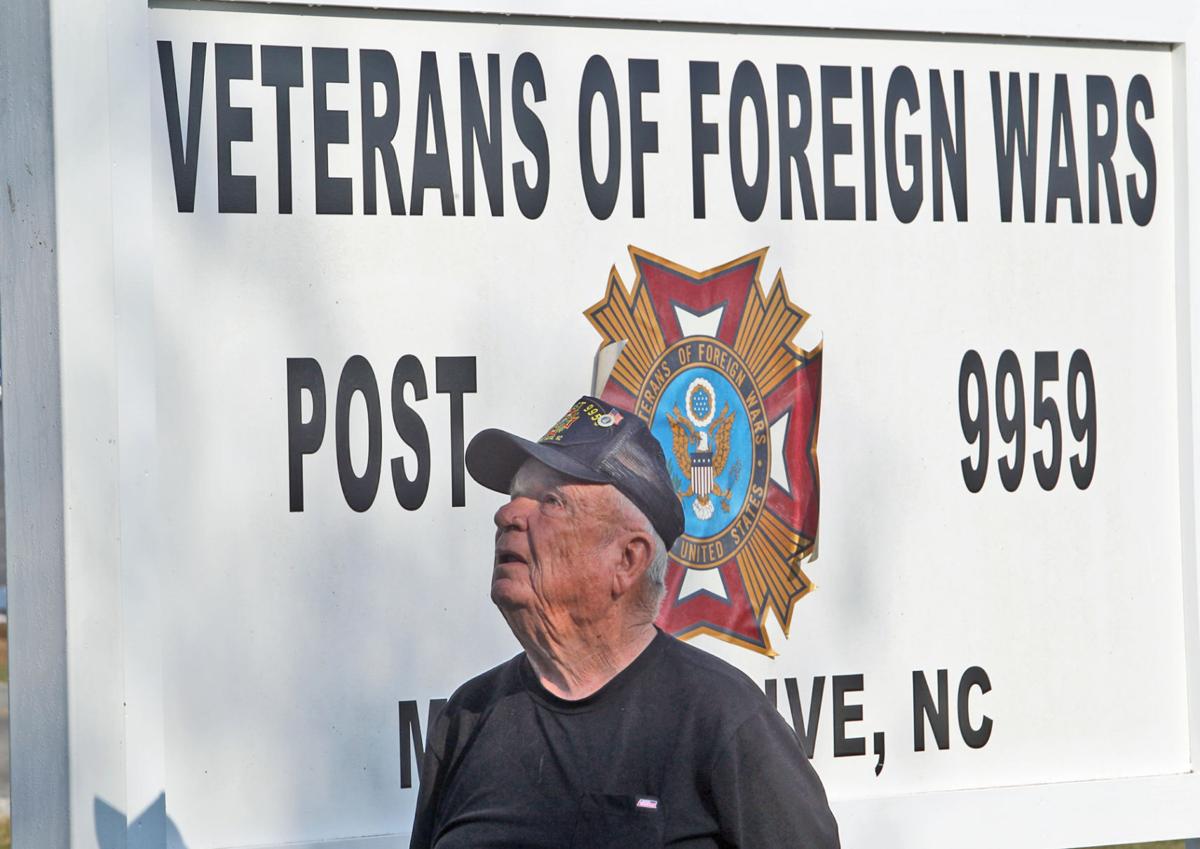 Hugh Martin looks up toward the U.S. flag Saturday morning during the 9/11 Remembrance hosted by Veterans of Foreign Wars Post 9959 and its auxiliary. 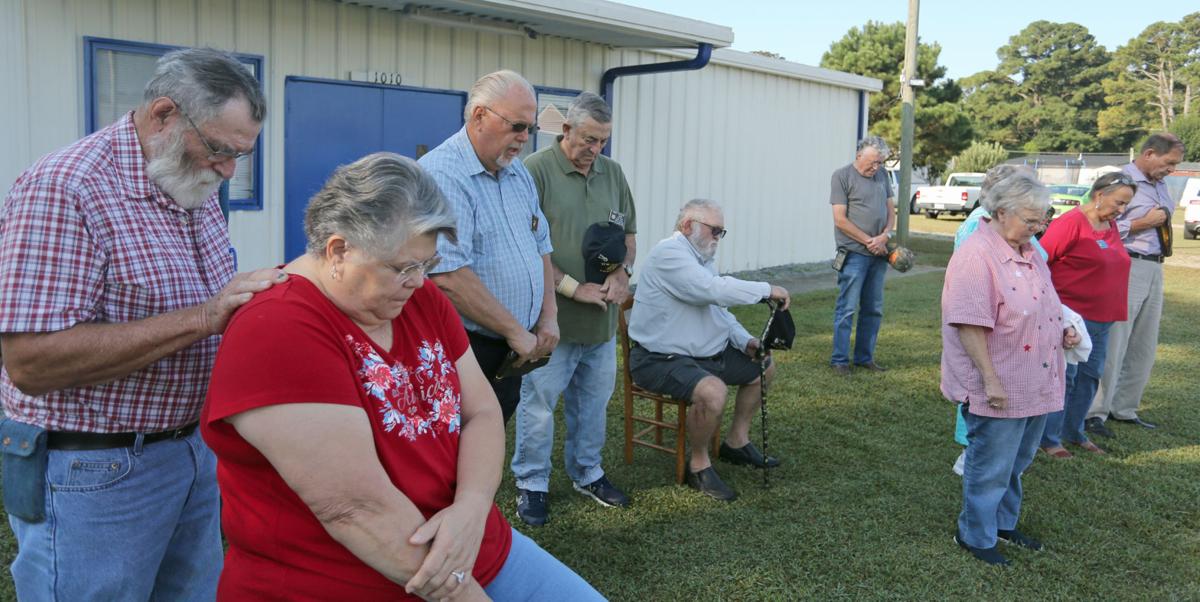 Heads are bowed during a prayer Saturday morning during the 9/11 Remembrance Ceremony hosted by Mount Olive Veterans of Foreign Wars Post 9959 and its auxiliary.

Mount Olive Veterans of Foreign Wars Post 9959 members Hugh Martin, left, and Ray Harrell lower the flag to half-staff Saturday morning while others salute or place their hands over their hearts during a 9/11 Remembrance Ceremony. The event was sponsored by the post and its auxiliary.

Hugh Martin looks up toward the U.S. flag Saturday morning during the 9/11 Remembrance hosted by Veterans of Foreign Wars Post 9959 and its auxiliary.

Heads are bowed during a prayer Saturday morning during the 9/11 Remembrance Ceremony hosted by Mount Olive Veterans of Foreign Wars Post 9959 and its auxiliary.

MOUNT OLIVE — Sept. 11, 2001, started out as just a normal Tuesday morning for Jimmy Outlaw — until he received a call from his daughter telling him to turn on his TV.

Outlaw, who was in his shop near Deep Run, turned on his TV about the time the second plane crashed into the twin towers of the World Trade Center.

Outlaw, commander of Mount Olive Veterans of Foreign Wars Post 9959, recalled his memories of that day Saturday morning during the post’s and its auxiliary’s annual 9/11 Remembrance Ceremony held at the post home on North Church Street.

Following the ceremony, doughnuts were delivered to first responders.

Witnessing the attack made him sad that an act of war had come to the U.S., said Outlaw, an Army veteran.

Outlaw said he knew some officers at the Pentagon, but did not know anyone in New York or in the plane that crashed in a Shanksville, Pennsylvania, field.

However, it does not matter whether you personally knew any of the victims, he said.

“They stood for America, and that was the biggest thing,” Outlaw said.

Nor does the size of a remembrance ceremony matter, he said.

Rather, it is the not forgetting, Outlaw said.

“We have this ceremony to memorialize what took place, and we’re just proud to be able to be here to do that,” he said.

“I think today is a great day to give thanks and pay respect to those who have gone on and hope that this never happens again.”

However, Outlaw said things do not look good today and encouraged those at the ceremony to be vigilant.

It is the post’s and its auxiliary’s time to reflect on 9/11, Violet Saviak, auxiliary member, said in opening the event.

“We are celebrating the 20th anniversary of what was a drastic attack on the United States,” she said. “Thousands of people lost their lives that day.

“We are here to remember, remember those lives lost, and also to pay tribute and to thank first responders. Once we leave here today we will disperse to deliver doughnuts to EMS stations, fire departments and police departments.

“We’ve already taken doughnuts to Tri-County (EMC) yesterday (Friday) — our way of thanking them for being a first responder and being there when we need assistance.”

Town board member Dennis Drapper compared people remembering 9/11 to earlier generations remembering where they were when Pearl Harbor was attacked or when President John F. Kennedy was assassinated.

“I remember the day very, very well, and the shock in just how people were just blown away almost by what was taking place, what had taken place,” Drapper said. “It was just so unbelievable.

“It is still unbelievable to this day, that such could happen, that people would do such things. We know there are those in this world (who) see things much different, and feel terrible toward us.”

As such, America must continue to be vigilant so that hopefully there will not be another attack like 9/11, Drapper said.

“My parents used to say they could tell you exactly what they were doing on Dec. 7, 1941 — another time when this nation was very viciously attacked,” he said.

In his prayer, post chaplain John Moore said that we want to express that people still remember 20 years later that so many lost their lives through a vicious terrorist attack.

Almost 3,000 people died in the twin towers in New York, and then others died at both the Pentagon and in the fields of Pennsylvania, he said.

“We pray God that your blessings would be now upon the families that are still living and still breathing today for the loss of their loved ones,” Moore said.

“And we pray God that you could cause our minds to never forget, to keep it in our mind of things that have happened so negatively for this country over this event, and we pray God that it never again, this kind of event, happen on the soil of the United States.”

Moore prayed as well for military members who are continuing to serve even though many people don’t realize it and while some don’t seem to care.

“We pray God that you would reach out and touch the men and women that are here and that have served our country,” he said. “We ask God your blessing upon them, and blessings upon our nation.”

Before praying, Moore asked audience members to join him in reciting Psalm 23.

“In Pennsylvania where Fight 93 crashed, those men and women had already heard of the attacks because phone calls were taking place on those airplanes,” Moore said. “They knew their airplane had turned around, and they knew that reports were that the airplane was intended to hit the White House.

“Calls were recorded and they said ‘let’s roll’ as they went after the terrorists. The people who were on that airplane, as they knew they were going to lose their lives, begin to recite the 23rd Psalm.”