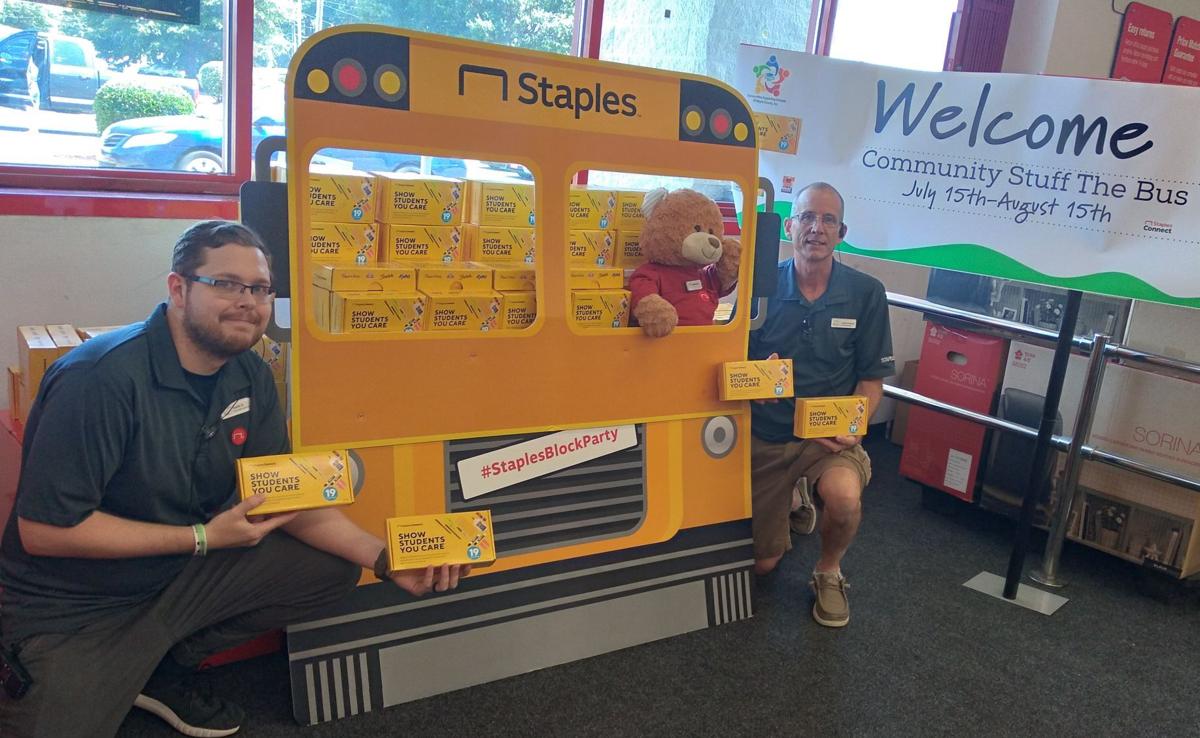 Staples employees, from left, Austin Smith, tech supervisor, and Jonathan Ashworth, general manager, add school supply kits to the collection display that Staples has set up for the Stuff the Bus campaign. 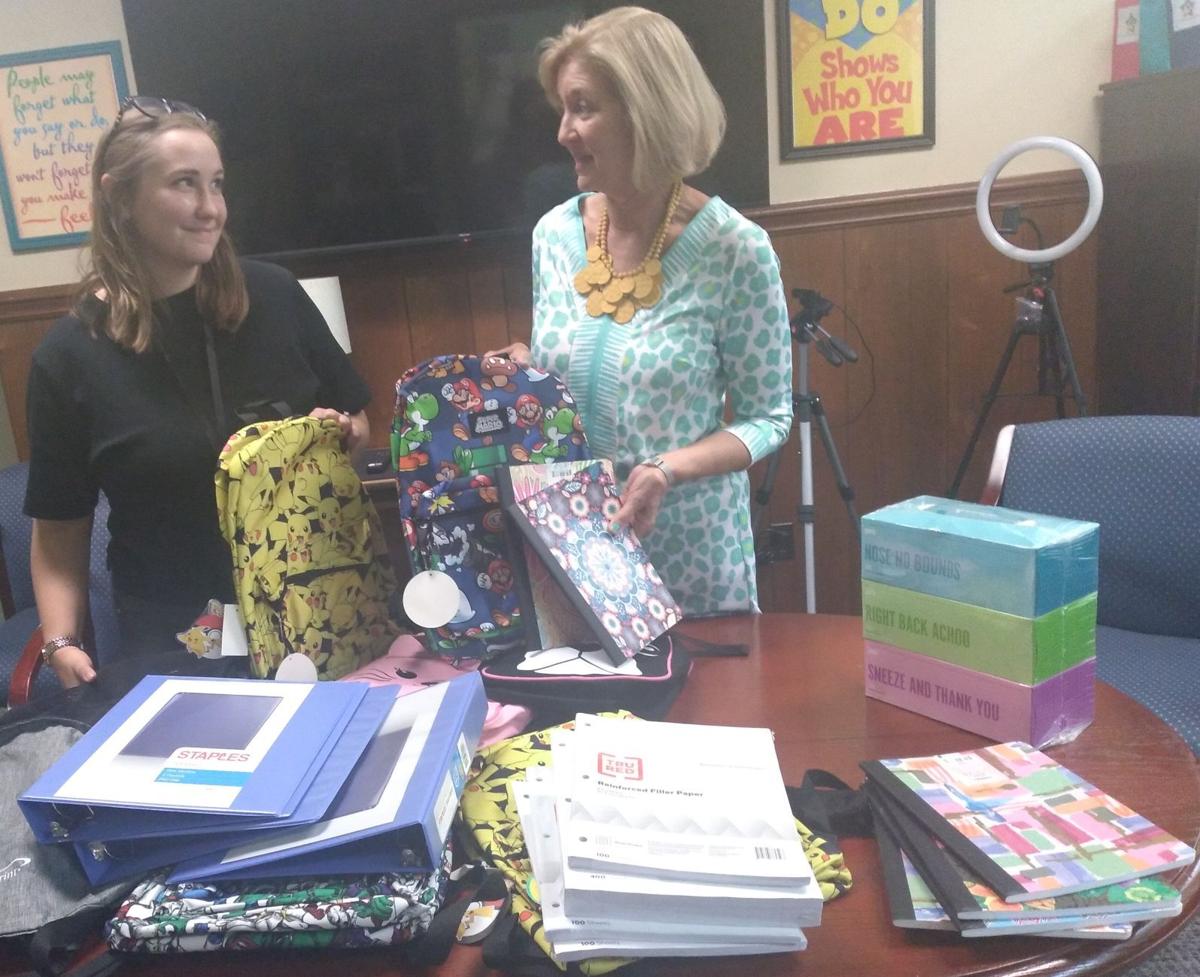 Aleisha Santos, left, Communities Supporting Schools program director, and Selena Bennett, CSS executive director, sort through some of the supplies that have been donated for the Stuff the Bus school supply drive. The drive runs through Aug. 15.

Staples employees, from left, Austin Smith, tech supervisor, and Jonathan Ashworth, general manager, add school supply kits to the collection display that Staples has set up for the Stuff the Bus campaign.

Aleisha Santos, left, Communities Supporting Schools program director, and Selena Bennett, CSS executive director, sort through some of the supplies that have been donated for the Stuff the Bus school supply drive. The drive runs through Aug. 15.

The 21st annual Stuff the Bus school supply drive is underway in Wayne County with a variety of donation options this year.

Sponsored by Communities Supporting Schools of Wayne County, the purpose of the drive is to collect school supplies for local children who don’t have them.

The drive started Thursday and continues through Aug. 15.

“It started because there was a tremendous need for kids who were going to school unprepared and did not have the necessary items for school,” said Selena Bennett, CSS executive director.

“I think we all know that in order for a child to survive, they need the necessary tools. The pandemic has placed an added pressure on people because of unemployment and families that have several children at home. School supplies are expensive.”

CSS goes through the school social workers because they have a list of children that they know are in need of school supplies, Bennett said.

“The children we serve already face a number of challenges in their daily life,” she said. “You pull the structure and support of the school system away from a child that needs those resources, then you send them home for almost a year. That increases the chances of them not achieving at the rate that they should or could.”

Bennett said online learning is not a great option for many of the children who struggle anyway and whose parents are not in a position to help their children like they would like to because they are trying to work and make a living for their family.

“If a parent cannot be there to monitor that child all day long, the increased chance of failure becomes even greater,” she said.

CSS is hoping to get local children started off right at school with the necessary supplies they’re going to need.

There was a big change in the Stuff the Bus campaign last year, as it went virtual due to the pandemic.

“The last in-person event with the bus was at the News Argus in August 2019,” Bennett said. “Last year, due to the pandemic, we had to move it to a virtual event because we were still heavy into masking and doing all those things.”

She said last year’s Stuff the Bus went better than it had in years past because people were focused on the fact that because of the pandemic, more effort needed to be poured into the supply drive.

“Also, we gave them options,” Bennett said. “Rather than just a big push, one day event, we did three or four things. The bus at the News Argus was always the visible symbol that we’re beginning Stuff the Bus.

“We didn’t have the bus last year, but we did a bigger push with our social media outlets and all of our interviews and papers, and everything online that we could possibly do.”

As a result, last year’s drive collected more than $50,000 in supplies and donations, Bennett said.

“We had an increased presence with people who would go online to Amazon where we had a wish list, and they would have things mailed to our office,” she said.

“We also had a number of new churches and civic organizations that jumped on board. And even though the big push was July 15 to Aug. 15, we accepted school supply donations all year long.”

This year’s event will be part virtual and part in-person, Bennett said.

“We have our Amazon wish list set up, which it’s super easy and convenient for people to shop,” she said. “They can go to Amazon and click on the wish list for Wayne County, like tissues, pencils, paper, backpacks, hand sanitizer. They add the items to their cart and CSS will get a notification that they purchased the supplies, and it will get delivered right to our office. So people don’t need to do any dropping off or running around to stores.

“Another option is people can set up their own boxes at local churches and collect donations that way. We will go pick it up for them. Businesses can also do this.”

Santos said people can also drop off donations of school supplies to the CSS office Monday through Thursday from 8:15 a.m. to 4:30 p.m. at 308 N. William St., on the second floor.

Bennett suggests people dropping off donations call first to set up a time.

CSS is partnering with Staples again this year.

“Staples has become our big partner,” Bennett said. “What the general manager has done is set things up so people can donate directly at Staples all year long.”

People can also make a monetary donation to Stuff the Bus. Make checks payable to CSS of Wayne County and in the memo line, put school supplies. Either drop off the check to CSS or mail it to CSS, P.O. Box 11557, Goldsboro, N.C., 27532.

Bennett said the Stuff the Bus school supply drive is one of the most rewarding things she does with CSS.

“This year I had people calling wanting to know how to help before the last week in June,” she said. “I always get calls around the Fourth of July, but people have been calling me earlier. It was phenomenal that people want to help.

“Anything that we can do to try to help get a child in the door, keep them at school, then that’s going to increase their chances of being successful. The school supplies definitely help do that. We’ve learned that children need a safe place to learn, they need the necessary supplies and they need a support system in place.”