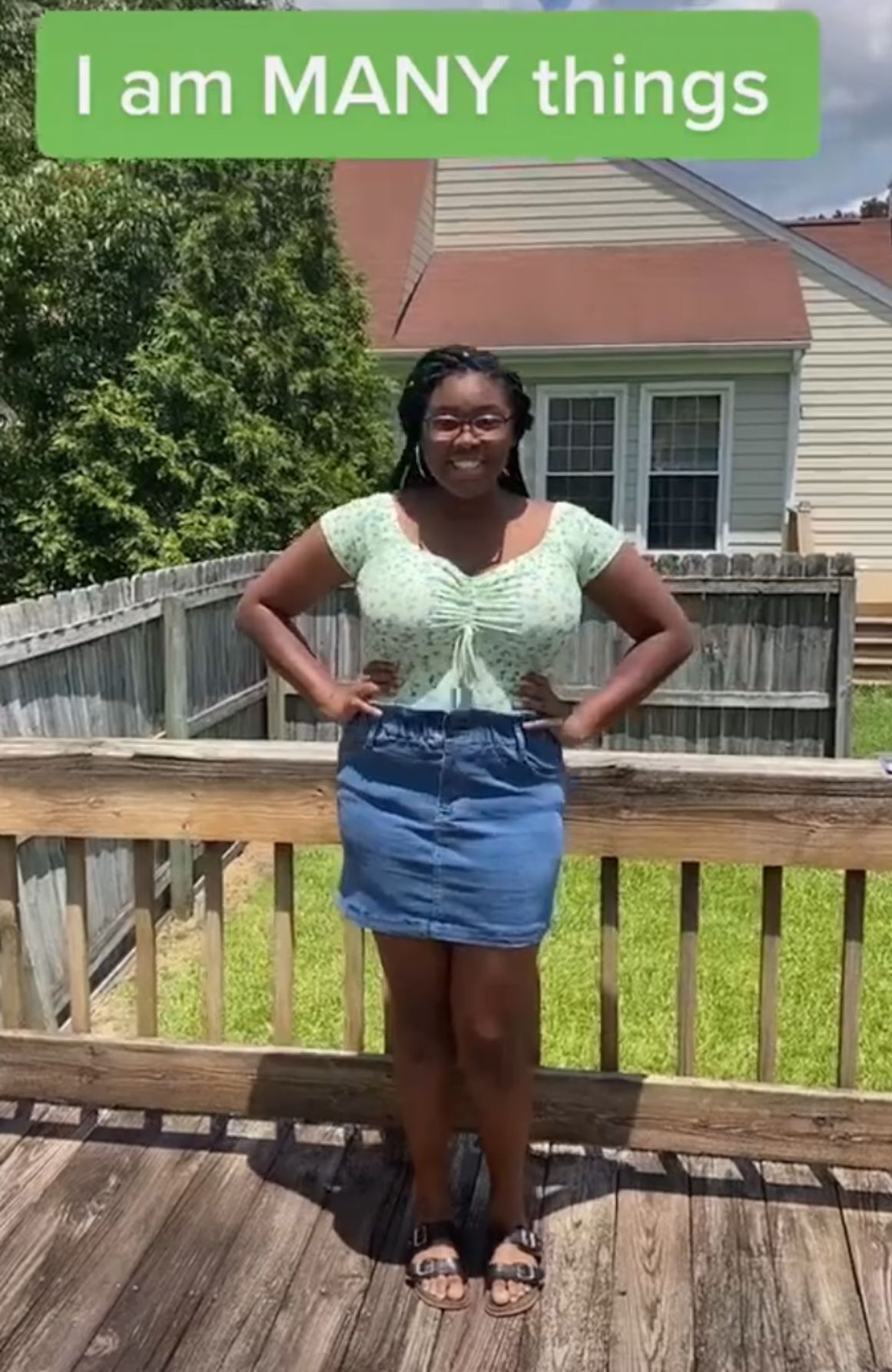 Hannah Williams was recently named grand prize winner in the first-ever Bomb Pop Awards competition, which encouraged youths to make a video of themselves and their talents. Williams won a $15,000 prize. 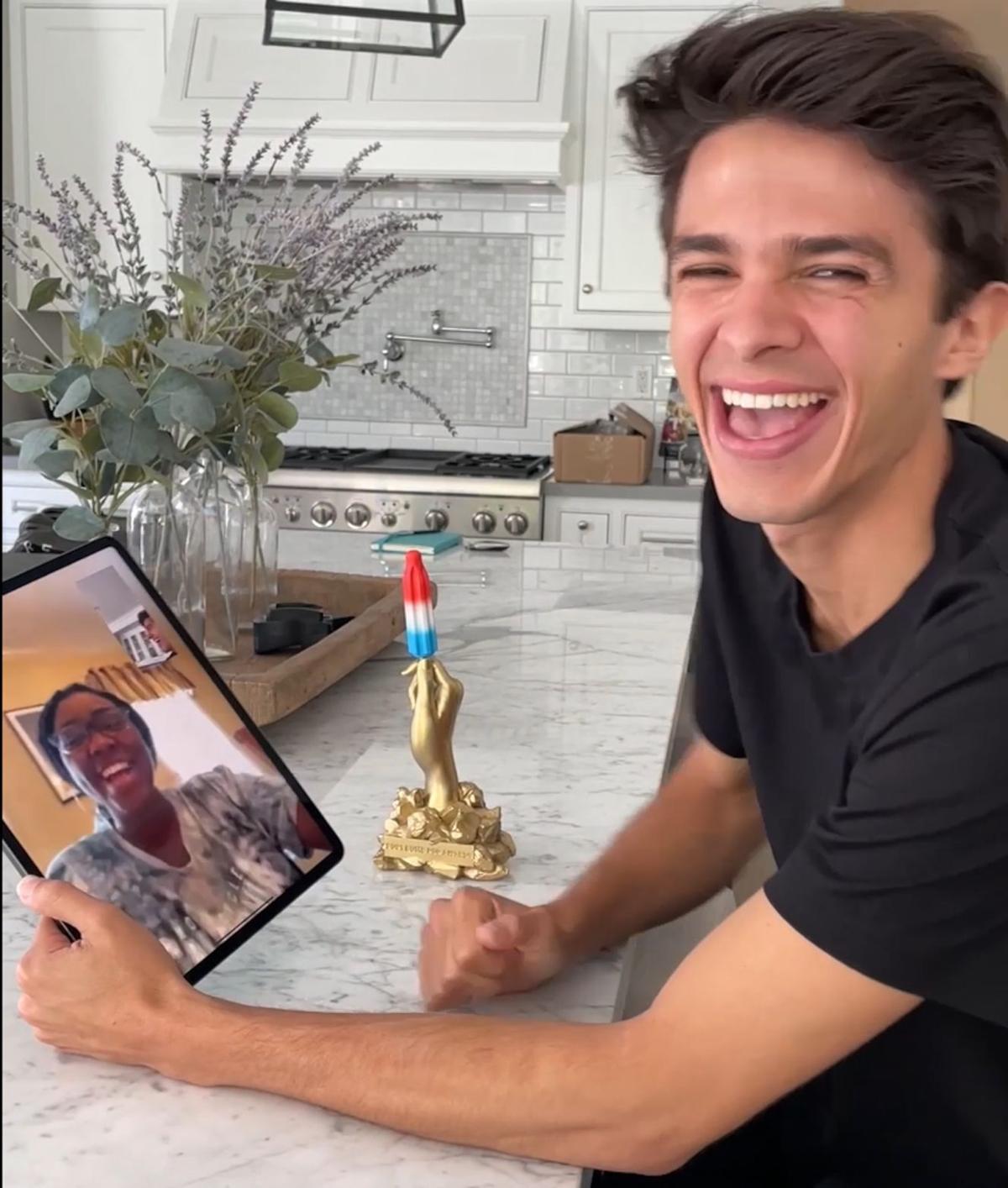 Actor and TikTok sensation Brent Rivera tells Hannah Williams that she won the grand prize of $15,000 in the first-ever Bomb Pop Awards competition. 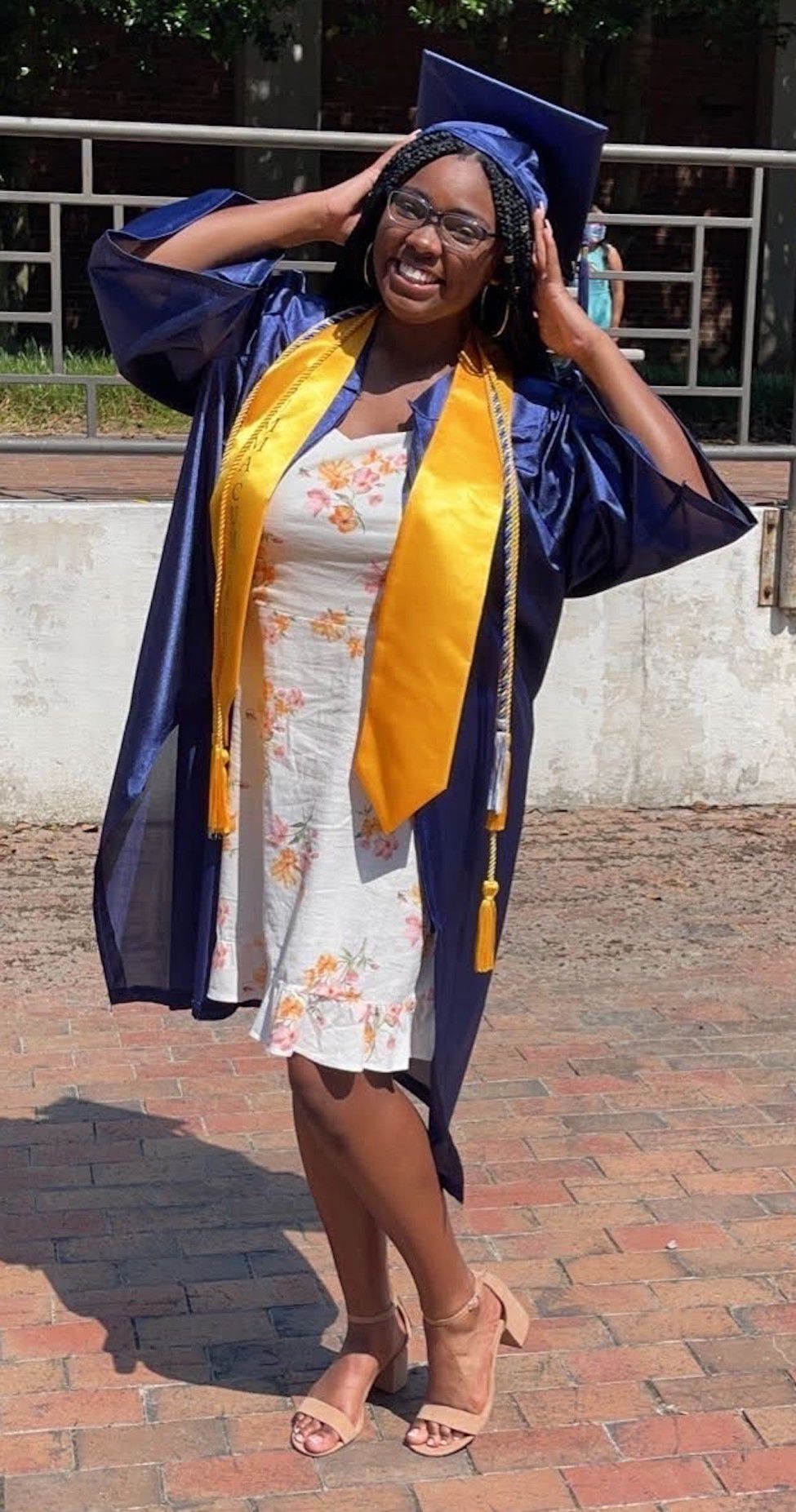 Posing in her high school graduation cap and gown was Hannah Williams’ second part of her 15-second video for the first-ever Bomb Pop Awards competition, which netted her a $15,000 grand prize.

Hannah Williams was recently named grand prize winner in the first-ever Bomb Pop Awards competition, which encouraged youths to make a video of themselves and their talents. Williams won a $15,000 prize.

Actor and TikTok sensation Brent Rivera tells Hannah Williams that she won the grand prize of $15,000 in the first-ever Bomb Pop Awards competition.

Posing in her high school graduation cap and gown was Hannah Williams’ second part of her 15-second video for the first-ever Bomb Pop Awards competition, which netted her a $15,000 grand prize.

Goldsboro resident Hannah Williams decided to step outside the box and made a video of her talents and who she is.

The video netted her a $15,000 grand prize in the recent Bomb Pop Awards competition.

The 18-year-old saw the competition on her TikTok app. She said the goal of the contest was to submit a video that shows off a contestant’s many talents or shows how he or she can express himself.

“It was a video about what makes you you,” Williams said.

“The day that I saw the awards rules, I actually went ahead and made a list immediately of what to put in it,” she said. “I clicked out of the TikTok app and opened my notes app and made a list of what I wanted to make in the video.

“I wrote things like, ‘I’m gonna use my dad’s saxophone as a joke. I’m going to juggle,’ ” which she actually does in the video with her dog, Ace’s, tennis balls.

“It was really funny because Ace was looking at the camera while I was throwing the balls in the air.”

This was the first-ever Bomb Pop Awards competition that was held through TikTok.

“Bomb Pop wants to see what makes teens ‘not one thing — from mastering karate and coding to practicing a falsetto while working on sushi rolling,’ ” said Ana Plefka, media relations for ICF Next, global marketing agency for Bomb Pop.

The competition was hosted by Bomb Pop and TikTok star Brent Rivera as a celebration of everything — from all-in passions to hidden talents and more, she said.

She said the first segment of the video shows that she’s a published poet.

“I opened up the book and turned to a piece that I wrote,” Williams said. “I’ve had experiences in the past where I got to publish original poetry in a 2019 collection through Appelley, a company that publishes work like that. I published an original poem that I wrote called ‘My Profound Truths.’

“That was a moment for me to talk about realizations that I have in my life, about friends and how, in the end, it comes down to knowing yourself and, no matter what, being able to trust yourself.”

Although Williams wrote the poem when she was in eighth grade, it wasn’t published until 2019.

She learned about the opportunity to publish her poem through her school counselor.

“I saw it and thought it was a great chance for me to publish my work,” Williams said.

The second segment of her video featured Williams in her high school cap and gown to show that she had graduated from Wayne Early/Middle College High School.

“This year has definitely been crazy,” she said. ”So I thought that I’d show I had the chance to graduate this year. To be more creative with that, I decided to wear my cap and gown and have all my cords on it. I showed that I got the chance to graduate from high school, as well as earning my associate degree.

The final segment of the video showed that Williams would like to be a Broadway actress.

“At the very end of the video, I showed my room with my collection of posters from Broadway musicals and musicals that I’ve participated in here in downtown Goldsboro,” she said. “I did StageStruck, finishing my last show back in March of this year. I’ve been doing StageStruck since 2014.

“I ended up making the video 15 seconds long. That wasn’t a rule, but I decided I’d like to make something quick but definitely different. I didn’t want to drag it out too long. I wanted to see how many things I could fit into 15 seconds.”

Williams said she feels the video shows people that she’s quick-witted and can work on her feet when given a task.

“I like to challenge myself, but I also like to show people that I can do various things,” she said. “And I can get creative with it.”

The day after submitting the video to the contest, she found out she was a winner.

“I was at work, and it was during my break when I saw the message,” Williams said. “I didn’t think much of it because the video itself wasn’t getting a lot of traction (on TikTok). But that was fine. I enjoyed that I made the video.”

After reading the official message from Bomb Pop, Williams knew she was one of the winners, but had no idea she netted the grand prize. She said she was blown away and superexcited. She forget for a second she was at work at TownePlace Suites by Marriott because it felt so unreal.

When she discovered she was actually the grand prize winner, Williams began shaking and screaming.

“I was trying to calm myself down,” she said. “It was very intense for me.”

She said her family, friends and co-workers were just as shocked as she was, congratulating her, saying, “You deserve it” and “I didn’t know you had it in you.”

Williams plans on using her prize money for a quality education.

“I’ve always wanted to go to college,” she said. “My hope is to use my prize to further expense my time on and off campus.

“I actually got accepted into North Carolina State University, so my goal is to help fund my way through N.C. State, majoring in communications.

“I’m very thankful to be chosen (the contest winner). I’m trying to do my best with celebrating.”