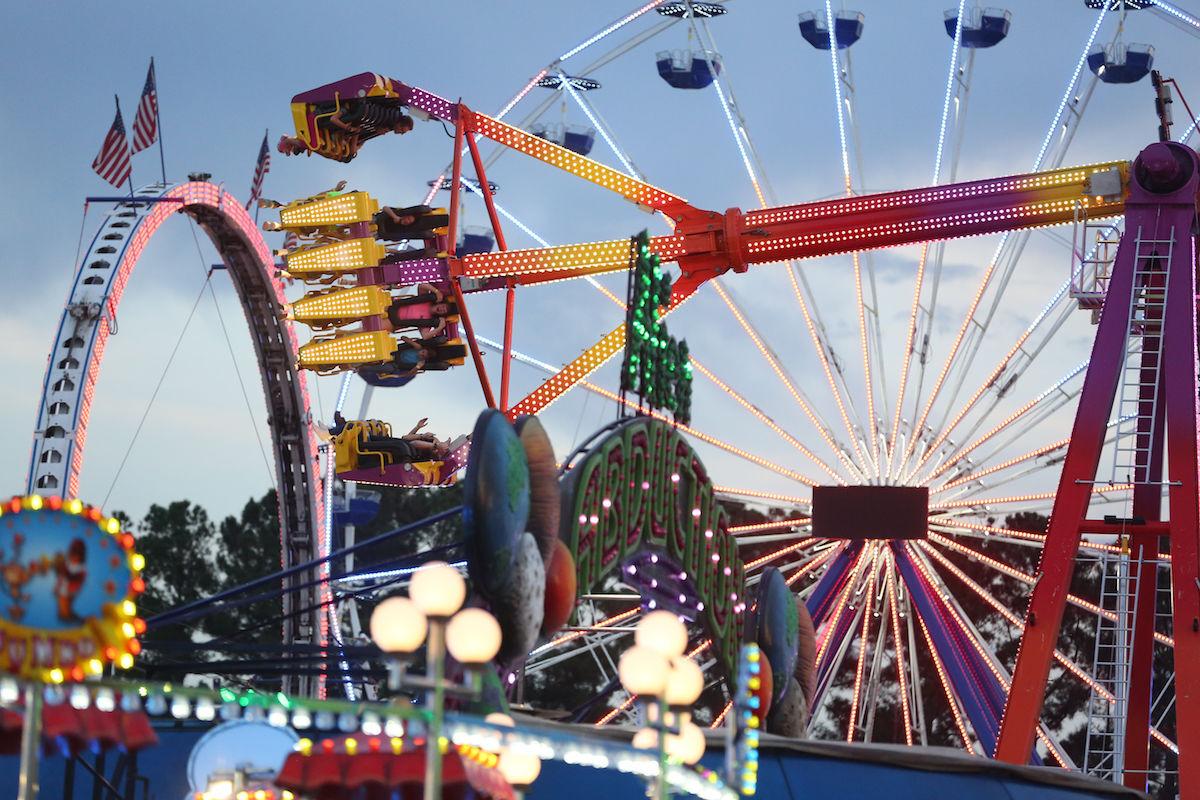 People enjoy the rides on the midway on opening night of the Wayne Regional Agricultural Fair, in 2018. Powers Great American Midways, boasting nearly 50 rides for adults and children, will open at 5 p.m. on weekdays, noon on Saturdays and 1 p.m. on Sunday during the fair that opens Thursday and continues through Oct. 9. 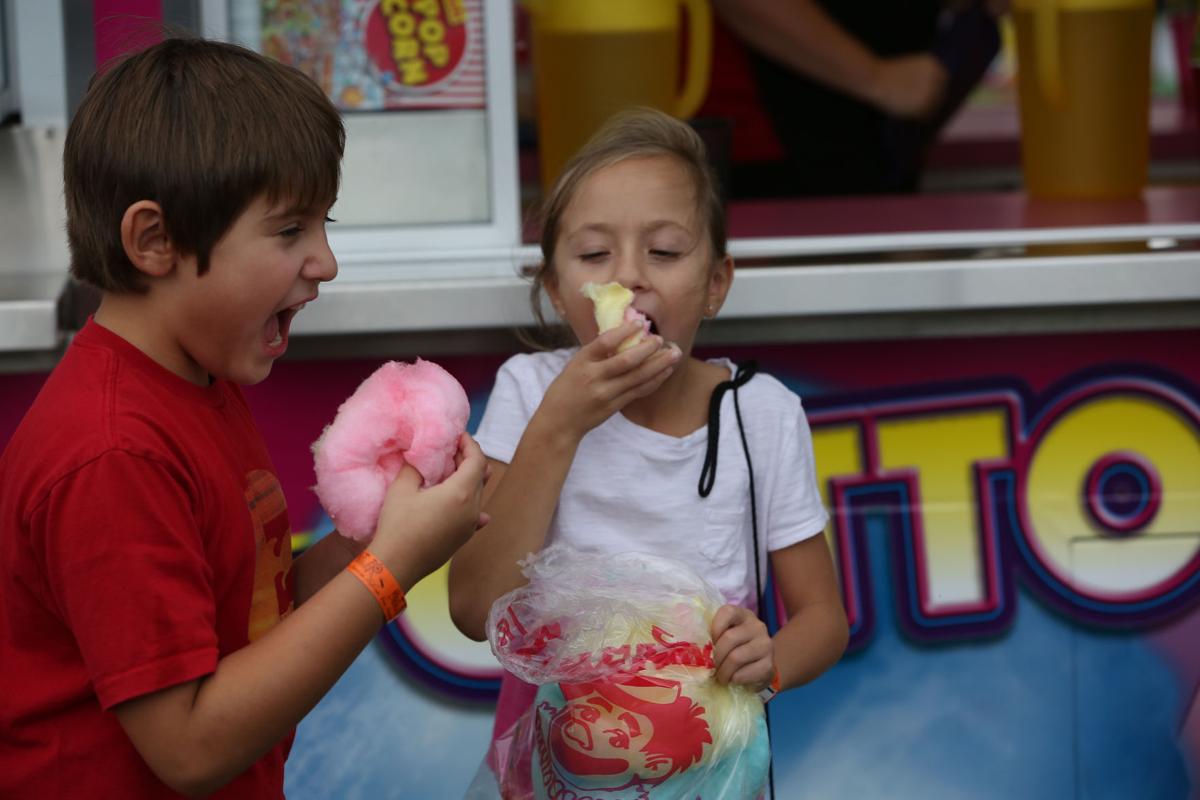 Fair-goers will have plenty of chances to try popular foods, including cotton candy, during the 72nd annual Wayne Regional Agricultural Fair during its 10-day run, starting Thursday at the county fairgrounds on U.S. 117 South in Dudley. 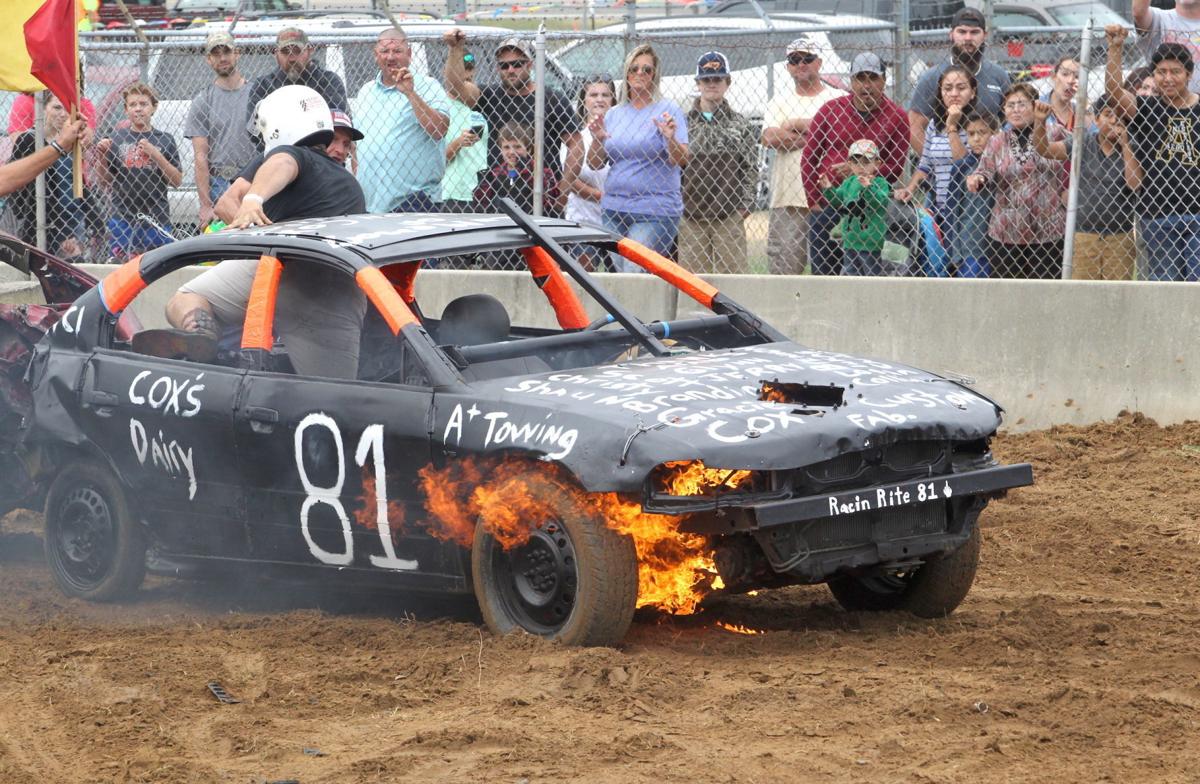 A demolition derby driver escapes through the rear window of his car after it catches fire during the 2019 Wayne Regional Agricultural Fair. The fan-favorite derby returns Oct. 9 in the grandstand at the county fairgrounds.

People enjoy the rides on the midway on opening night of the Wayne Regional Agricultural Fair, in 2018. Powers Great American Midways, boasting nearly 50 rides for adults and children, will open at 5 p.m. on weekdays, noon on Saturdays and 1 p.m. on Sunday during the fair that opens Thursday and continues through Oct. 9.

Fair-goers will have plenty of chances to try popular foods, including cotton candy, during the 72nd annual Wayne Regional Agricultural Fair during its 10-day run, starting Thursday at the county fairgrounds on U.S. 117 South in Dudley.

A demolition derby driver escapes through the rear window of his car after it catches fire during the 2019 Wayne Regional Agricultural Fair. The fan-favorite derby returns Oct. 9 in the grandstand at the county fairgrounds.

DUDLEY — Instead of fall foliage, brightly colored carnival rides and garish lights greeted the first day of autumn Wednesday at the Wayne County Fairgrounds as the 72nd annual Wayne Regional Agricultural Fair continued to gear up for its 10-day run.

Owned and operated by the nonprofit Wayne County Livestock Development Association, the award-winning fair will run Thursday through Oct. 9.

Powers Great American Midways, boasting nearly 50 rides for adults and children, opens at 5 p.m. on weekdays, noon on Saturdays and 1 p.m. on Sunday.

The fair will be open from 10:30 a.m. to 1 p.m. Friday, Oct. 1, for its special populations event. The gates will not be open to the general public during that time, but will open at 4 p.m.

Wayne UNC Health Care Senior Day will be held Tuesday, Oct. 5 when anyone 60 or older will receive free admission. The Salute to Senior Citizens will start at 3 p.m.

“We are going to have a fair, and it is going to be a fair to remember,” said Eddie Pitzer, fair manager. “I think people are excited. I think they are excited to just be able to come to an outdoor event where they can just have some good, traditional family fun.

“For us, the fair is so important because it’s a time where we can showcase agriculture, which is one of the objectives of our Livestock Development Association.

“And of course it’s just good family fun. A lot of memories are created coming to the fair over the years, and we just encourage everybody to come out and have a good time. I think it’s gonna be a fair to remember and probably one we will never forget.”

That is especially true since the 2020 fair was canceled because of the COVID-19 pandemic, Pitzer said.

Masks are not required to attend the fair since it is mostly an outdoor event, however, social distancing will be encouraged, he said.

There will be plenty of hand sanitizing stations, too, he said.

The fair has a good formula that has worked for a lot of years — competitions, educational events, rides, food, livestock shows, exhibits, free entertainment all while providing a venue for nonprofits to hold fundraisers, Pitzer said.

Keeping the cost of admission affordable for families is an important part of that formula as well, he said.

“We stayed with the gate admission price, $7 (adults) and $4 (children 12 an under), but we’re offering discount tickets, advanced ticket sales, where they can buy their admission ticket for $5 and $4 for 12 and under,” he said. “So, we do offer a break on the adult admission if they buy them in advance.”

Carnival wristbands will be $30 this year, but if you buy a wristband you can ride the entire time the day you are at the fair, he said.

A box office is located at the fair office for advance tickets. Tickets can be purchased online through Etix, too.

“So there are a couple of options to buy discount tickets and then of course we have opening night with the Southern Bank Carload Special ,which is up to six people (in one vehicle) can get in for $75,” Pitzer said.

The $75 includes six entry tickets and six ride wristbands for a savings of up to $147, he said.

“That’s been pretty popular, and it’s been one of those things that a lot of people say, well, we can’t afford to go to the fair,” Pitzer said. “Well, you can’t afford not to come to the fair if you can take advantage of that $147 savings.

“So, we did that just to kind of help anybody that might have several kids and want to bring them all to the fair and they all want to ride rides. It has been very successful for us.”

The fair also distributes free tickets to Wayne County school children for admission to the fair on Monday, Oct. 4, and Tuesday, Oct. 5. A $3-off ride coupon is in on the back of the school ticket.

Most of the traditional events are back except for the queen of the fair that was canceled this past week because of a lack of entries.

“We didn’t have but I think three, and only one filled out a registration and two showed an interest,” Pitzer said. “So, we ended up having to cancel the queen of the fair. We just didn’t have enough entries for that so we will have to re-evaluate that for next year.”

Organizers did not have time to come up with anything to fill that time slot, he said.

“We do feel good that the schools are working with us as far as talent and spelling bee contests and some of the vocational competitions that we’re going to have,” Pitzer said

The crowd favorite demolition derby is scheduled for 1 p.m. on the final day of the fair, Saturday, Oct. 9, in the grandstand.

“All of our livestock shows are still operating in the first week of the fair, starting off with the hog show on Thursday night (Sept. 30),” Pitzer said.

“We are receiving entries for the cheerleading competition on Wednesday, Oct. 6,” Pitzer said. “This year I’m bringing back Mike Bishop, the hypnotist, to perform. But we’ve also got the Kenyan Safari acrobats that’ll be performing under the pavilion.

“And then we’re bringing in Corey Lancaster, who’s a professional woodcarver. He’s actually from the Princeton area.”

Lancaster will be across from the white building, and the items he carves will be up for auction on the last day of the fair.

As always there will be plenty of free entertainment and good food, Pitzer said.

GETTING TO THE FAIRGROUNDS

Traffic continues to be a concern even though the state has made some improvements to the U.S. 117 South left turn lane for Genoa Road that runs beside the fairgrounds.

On some days during past fairs, southbound traffic on U.S. 117 South has been backed up from the short turn lane for Genoa Road to past the Neuse River bridge.

“We will have a couple of messenger boards telling people for through traffic to stay in the right lane, fair traffic left lane,” Pitzer said.

“Unfortunately our parking is limited and once it starts to fill up, it does start to back up as people look for alternative sites to park,” Pitzer said. “We would encourage people to come during the week when the traffic is not as bad. You know our biggest surge is on the weekend.”

For more information and full schedule of events, visit waynefair.com.

What not to miss at the Wayne Regional Agricultural Fair