If you need to purchase a subscription.
You have permission to edit this article.
Edit
Welcome, Guest
Home
News
Sports
Opinion
Obituaries
Faith
Life & Family
e-Edition
Classifieds
Local Events
Publications
Share This
1 of 4 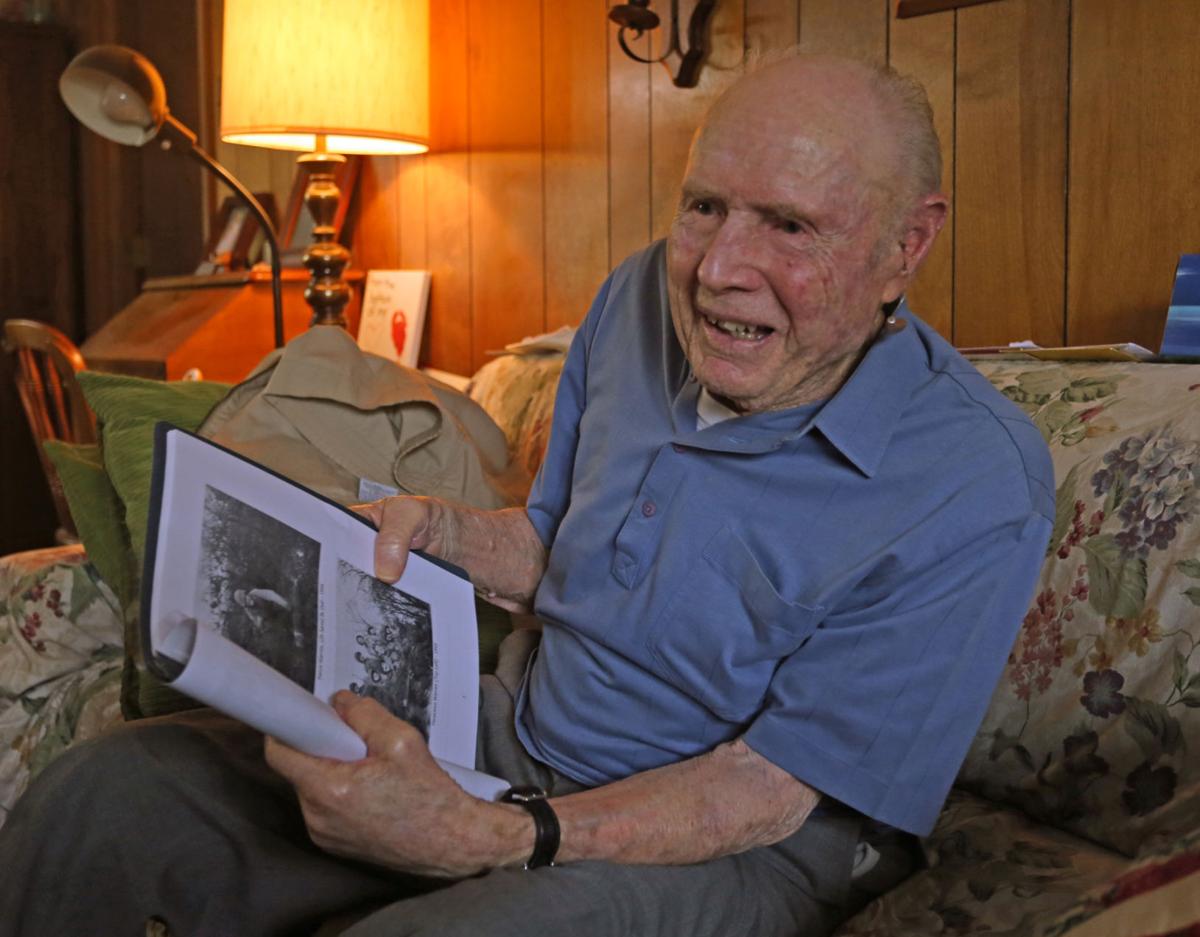 World War II veteran Roger Casey Sr. leans over to show photos of him in the book that he wrote about his service during the war. Casey will be the grand marshal Thursday for the Goldsboro Veterans Day Parade. 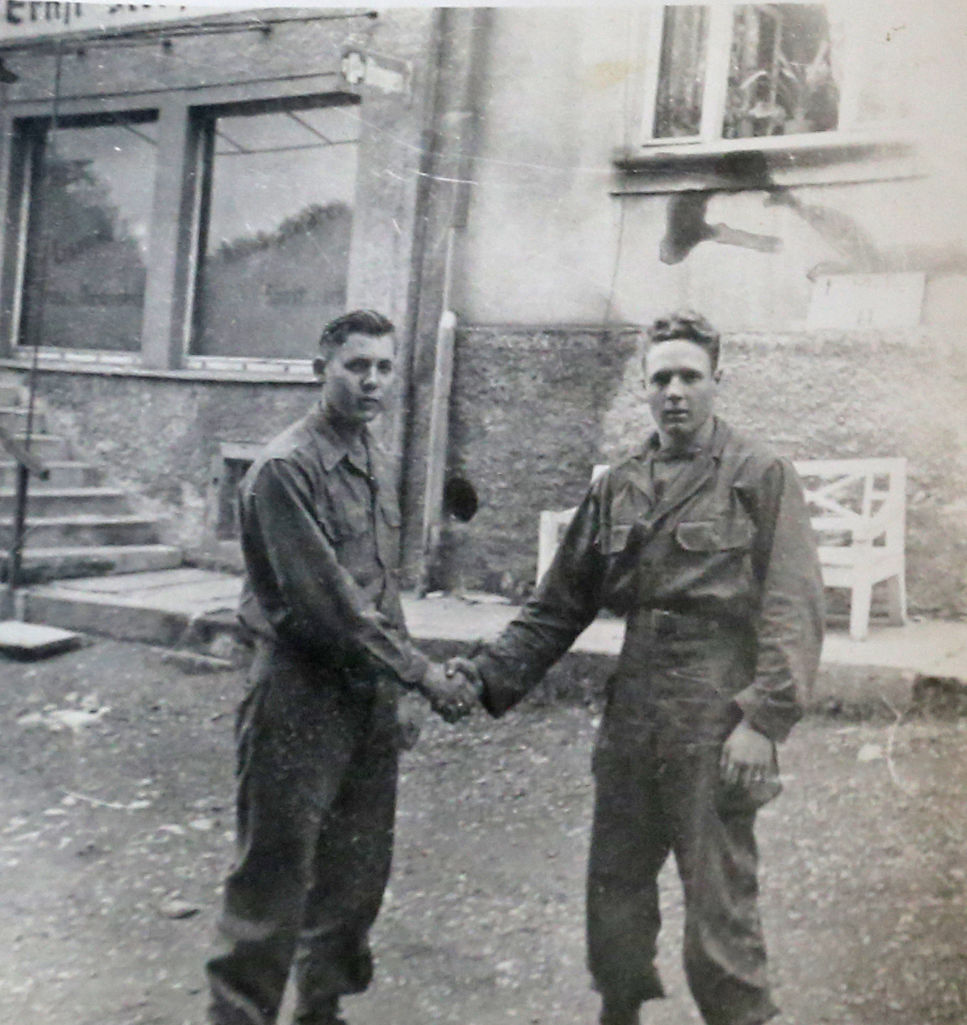 Brothers Sam Casey, left, and Roger Casey Sr. meet in Plauen, Germany, where Roger Casey was part of the occupation force at the close of World War II in Europe. 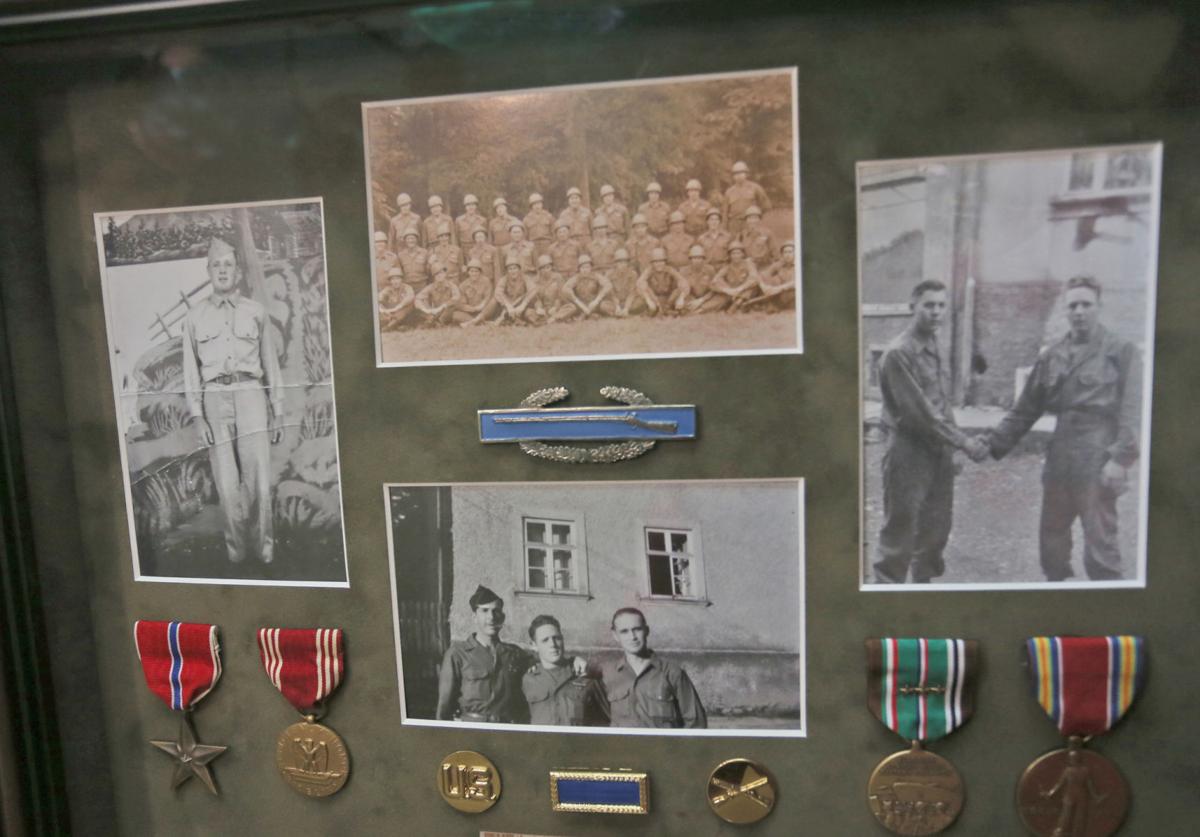 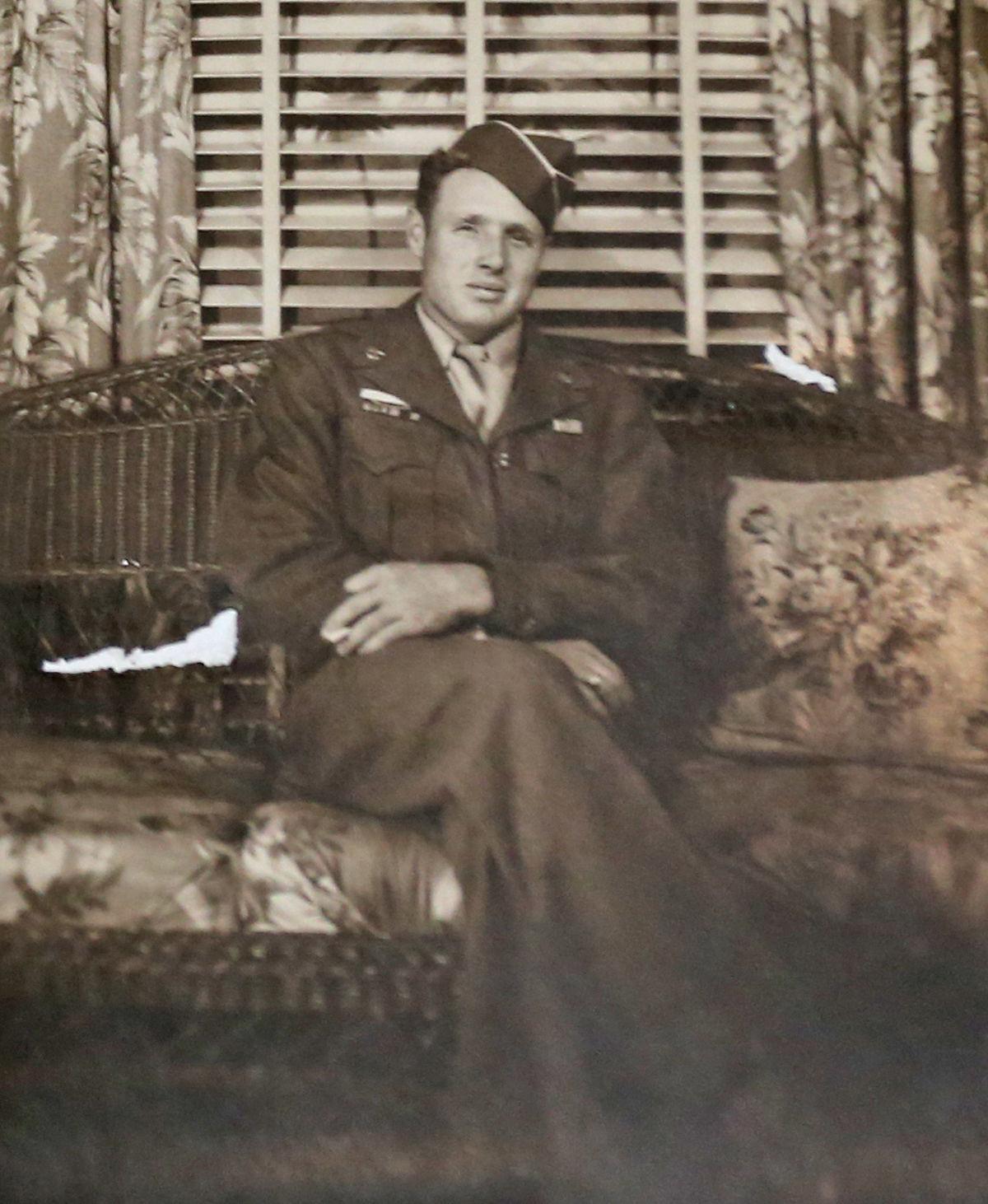 World War II veteran Roger Casey Sr. leans over to show photos of him in the book that he wrote about his service during the war. Casey will be the grand marshal Thursday for the Goldsboro Veterans Day Parade.

Brothers Sam Casey, left, and Roger Casey Sr. meet in Plauen, Germany, where Roger Casey was part of the occupation force at the close of World War II in Europe.

Roger Casey Sr. enjoyed being at the trigger of his water-cooled .30-caliber M1917 Browning machine gun even though he had to lug the 31-pound weapon across Holland and Germany during the final two years of World War II.

He was, he said, a good machine gunner.

What he did not enjoy or ever grow to like is what the weapon did to the German soldiers he turned it on.

Casey, a veteran of the Battle of the Bulge, will serve as the grand marshal in Thursday’s Goldsboro Veterans Day Parade.

After the war he returned to the family farm before taking over operation of Keen Plumbing Co.

Now 96 and hard of hearing as the result of artillery barrages, Casey pauses as his eyes water and his voice chokes with emotion as he talks about his service during the war.

Casey’s voice cracks with even more emotion as he recalls the time he disobeyed a direct order.

“We were taking this big building, I believe it was in Madgeburg (Germany),” Casey said. “An officer came up behind me and said shoot anything that moves. Yes sir. Yes sir.”

But it was women, children and older people who emerged.

“We heard there was a little breakthrough,” he said with a laugh. “It was a big breakthrough.”

Casey said they were staying in a house with an older German woman at the time who could identify aircraft by the sound they made as they flew over.

He recalls seeing large numbers of German S.S. Panzer Division tanks and thinking they were going to get him.

But they were told hold at all cost and that there was to be no retreat.

Casey was about 18 when he volunteered to serve in the Army in 1944.

“I was just a young boy then,” he said. “I wanted to get in something because the papers were full of Germans breaking through.

Casey wanted to join the Navy and see the world. He persuaded his father to take him from their farm in the Dudley area to Norfolk, Virginia, to talk to a recruiter there.

His father tried to talk him out of volunteering, but gave in when he saw his son was determined to go somewhere and get in one of the armed services.

Casey went through the interview and physical with no problem until they saw he was missing his right index finger that had been lost in a school bus door accident when he was 8 years old.

The Navy rejected him because of the missing finger.

He began to wonder if the Army would have him.

At about the same time that Casey was making plans to see the Army recruiter, his older brother, Sam, received a notice from the Draft Board to be prepared to be drafted.

His brother was married and had a child, and Casey said it occurred to him to volunteer in his brother’s place.

He went to Fort Bragg to sign up. However, some time later his brother was drafted anyway, and at the end of the war the two met in Plauen, Germany, where Roger Casey was part of the occupation force.

Casey has a photo of him and his brother shaking hands during that meeting.

Casey recalls taking a troop train to a camp in New York and from there by truck to the docks at the New York harbor. They boarded a British ship.

As the ship passed the Statue of Liberty, Casey said he wondered if he would ever see it again.

“We had a right good time in England,” he said. “I tried to stay out of trouble.”

After arriving in Europe, Casey said they were told to stay on the paths because the fields had not been cleared of German mines.

“We stayed on that path because I was scared of mines,” he said. “We got on a train, and I went to war with Germany finally.”

When he reached Holland he was assigned to Company D, 119th Regiment, 30th Infantry Division. Nicknamed the “Old Hickory” division, it was an old National Guard Division made up originally of men from North Carolina, South Carolina and Tennessee.

Casey was among the first Americans to get in a German ME-262 jet.

The plane had crashed in a field, and Casey and his fellow soldiers were enjoying examining the plane and marveling at the simplicity of the controls.

They also were wondering why America could not make a jet.

But that moment of joy turned into one of terror when another German jet came diving down as if it was going to attack.

The soldiers scattered like quail, but the plane didn’t shoot, he said.

Casey recalls another terrifying experience during his unit’s drive toward the Rhine.

They were assaulting a small village, approaching carefully, but steadily. They had encountered little resistance when suddenly a German machine gun opened up on them at close range, sending Casey and his friend Ross Baker from Virginia diving behind a large pile of sugar beets.

The German machine gunner saw them and opened up where he thought they were.

Casey said he could hear and see that the German was slicing the beets just to their left.

Fortunately, he fired in short bursts to conserve ammunition, allowing Casey and Baker to roll in tandem to the left, knowing the German would next fire in the place they had just been.

They rolled back and forth several times. Suddenly, a barrage of artillery fire plastered the area around them and must have momentarily diverted the gunner’s attention, Casey said.

They jumped up and ran and zigzagged toward a small, long brick building nearby just as the German began firing at them again at very close range.

Casey said that as he lay there on the floor trying to catch his breath and regain his senses, he noticed that they were not alone — in the corner of the room were two German girls huddled together.

The shelling and gunfire finally tapered off as Casey’s unit swept through the town. Someone else took care of the German machine gunner that almost got Casey and Baker.

When things quieted down, Casey went over and reassured the girls that they would not harm them.

In another narrow escape, Casey was in a foxhole behind his gun when he noticed a single large caliber German artillery gun kept firing at regular intervals.

The shells began moving closer and closer to his position, and one landed just few feet in front of his gun.

He was unhurt except for the ache and ringing in his ears. Casey said he wanted to run away because he knew another shell would soon follow.

It did, landing with a thump before bouncing over his head, landing about 5 or 10 feet behind his gun.

Steam was rising off of the shell, and Casey said he thought it was a delayed-action shell and would explode at any second.

He jumped up and ran toward a basement in a nearby house. Just as he got near the house another shell hit a tank, which began to burn immediately.

Casey said the lieutenant in command chewed him out for abandoning his gun for the second time. The first time was when he dove behind the beets.

Casey said he tried to tell the officer about the unexploded large shell at the edge of his foxhole.

The lieutenant called Casey a dummy and said the shell was a dud and would not explode if it already hadn’t done so.

As Casey was climbing back up the steps, another shell hit the house, almost completely demolishing the house above them.

He said they all staggered out coughing and gasping for clean air.

Fortunately, no one was seriously hurt although the tankers were killed.

He went back to his foxhole and later had a photo taken of him posing with the shell.

Casey said he felt ashamed and cowardly for having abandoned his gun.

“I felt as if I had let my outfit and my country down, and I was determined to never do it again,” he said.

Casey said that one day while he was playing soldier and waiting to be discharged, a sergeant approached him and said the captain wanted to see him immediately.

The message worried Casey, who wondered what in the world he had done to deserve any kind of reprimand.

Instead of being chewed out, Casey was told he was to receive the Bronze Star and to report to the parade ground the following day in full dress uniform.

He didn’t know what to say other than “Thank you, Sir.”

The parade and ceremony was like a great Hollywood production, he said.