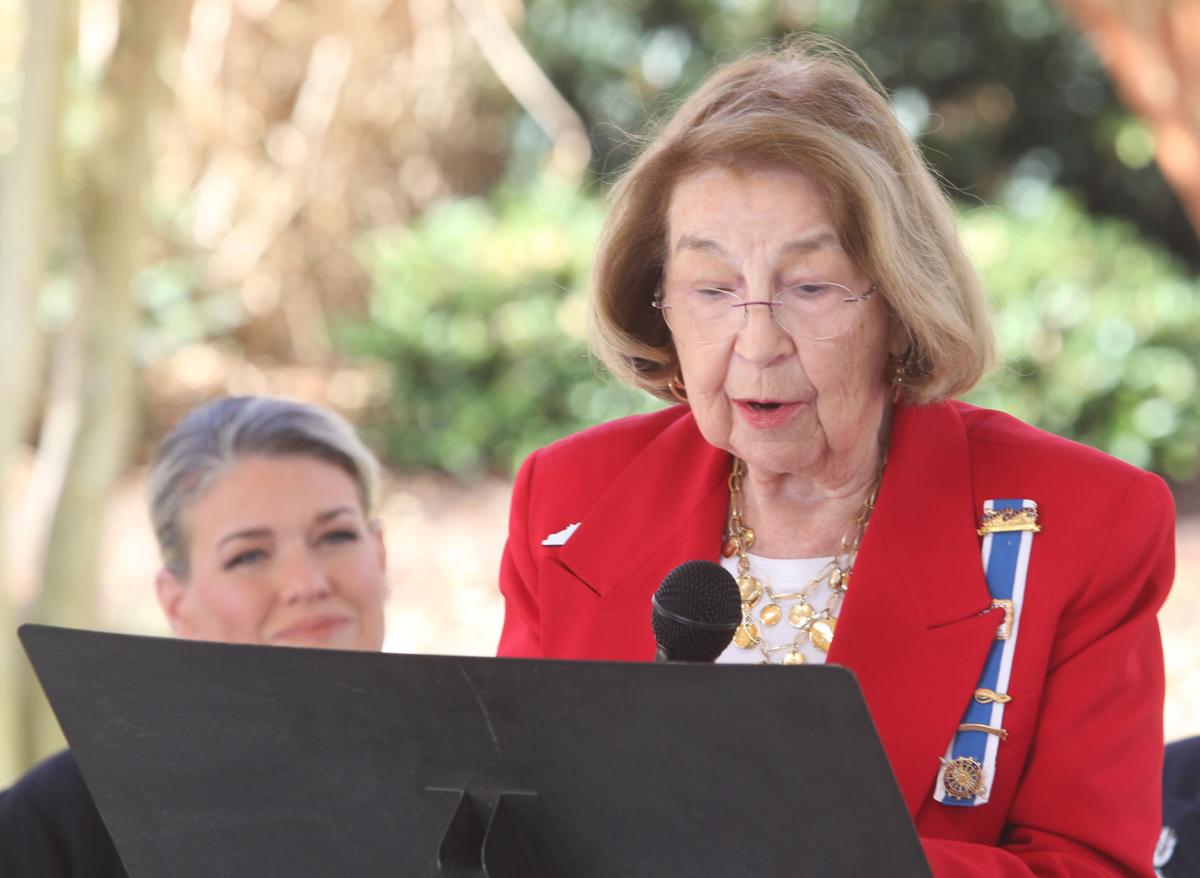 Katherine Wolfe, regent of the David Williams Chapter of the Daughters of the American Revolution, leads a memorial service and wreath-laying ceremony at the Wayne County Veterans Memorial Thursday afternoon following the Veterans Day Parade. 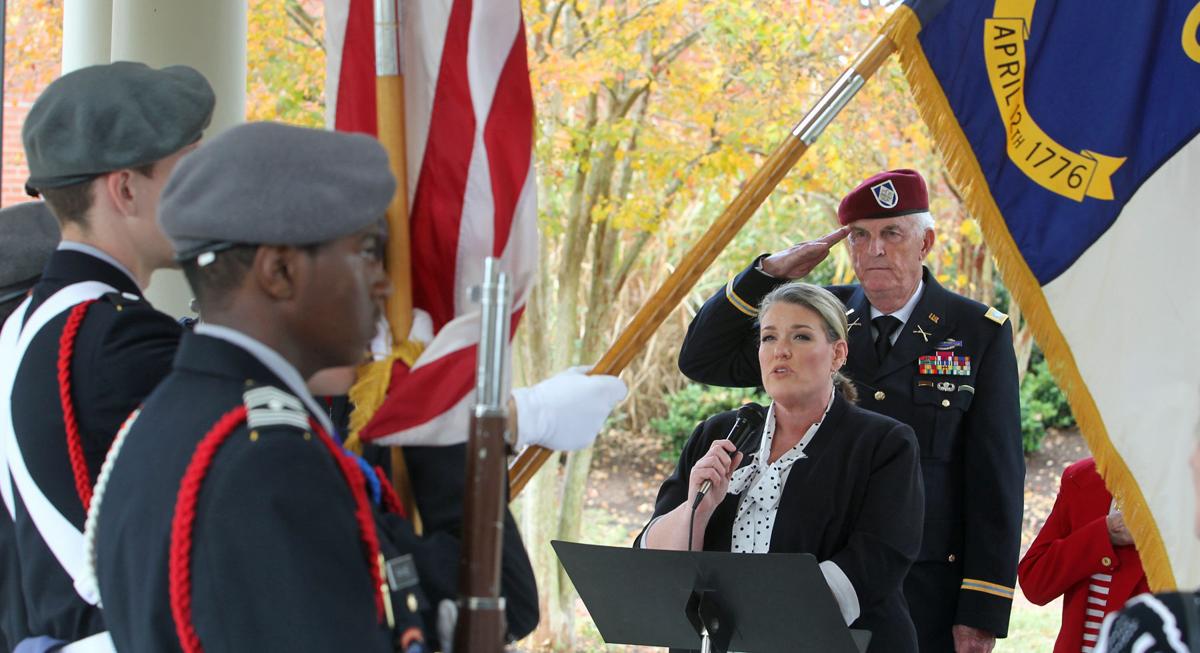 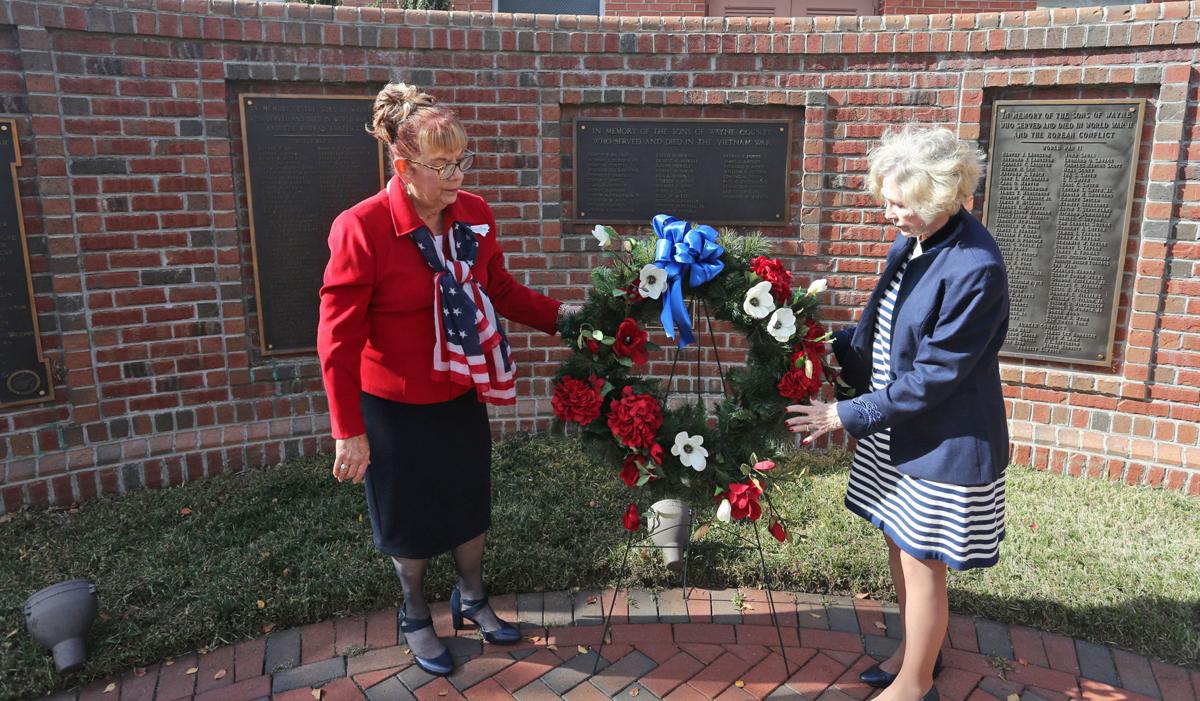 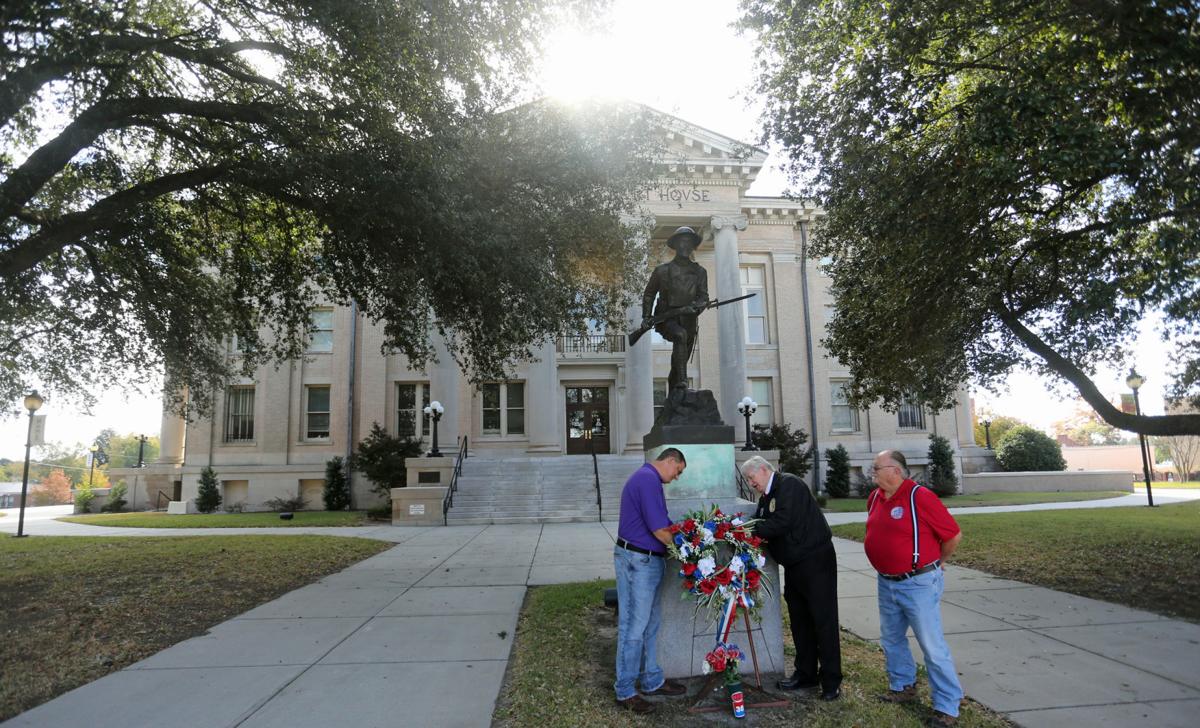 Katherine Wolfe, regent of the David Williams Chapter of the Daughters of the American Revolution, leads a memorial service and wreath-laying ceremony at the Wayne County Veterans Memorial Thursday afternoon following the Veterans Day Parade.

She and her classmates sang “From the halls of Montezuma to the shores of Tripoli” (the Marines’ Hymn) followed by the national anthem while her father fought overseas in World War II during the Battle of Okinawa.

Thursday afternoon, Wolfe, now regent of the David Williams Chapter of the Daughters of the American Revolution, led a memorial service and wreath-laying ceremony at the Wayne County Veterans Memorial.

“To all of the veterans here today, I sincerely thank you for your service and your sacrifice,” Wolfe said. “And to all I say thank you for choosing to honor veterans today and show your support for our heroes, past and present. In the words of President Truman, ‘Our debt to the heroic men and valiant women in the service of our country can never be repaid. They have earned our undying gratitude. America will never forget their sacrifices.’

“On this 11th day of the 11th month following the parade at the 11th hour, we gather to honor and remember veterans from Revolutionary soldiers at Valley Forge who shivered and starved in the winter to the Doughboys in the muddy trenches in France to the platoons who patrolled the jungles of Vietnam to the young men and women who patrolled the mountains of Afghanistan and the desert of Syria. We honor you.”

Wolfe said that in her lifetime the U.S. Army, Air Force, Marines and Coast Guard have fought in battles from WWII to Afghanistan.

“Thank you for attending this service today,” she said. “God bless you and your families. God bless our troops, and God bless America.”

Davis Benedict, president of the N.C. Society of Children of the American Revolution, led the Pledge of Allegiance. The Rosewood High School JROTC color guard presented the colors.

DAR members Lisa Buchtmann and Betty Duncan placed the wreath for the chapter while Benedict placed a wreath on behalf of the N.C. Society of Children of the American Revolution.

The welcome was given by Bill Graham, Wayne County Veterans and Patriots Coalition chairman.

Goldsboro Mayor David Ham, a retired Army lieutenant colonel, thanked those in attendance at the annual event. A public event was not held last year because of the COVID-19 pandemic, he said.

DAR representatives did gather to honor veterans and did lay a wreath, Ham said.

“I am happy that we can gather again,” he said.

Following the ceremony, the DAR wreath was placed at the foot of the Doughboy statue in front of the Wayne County Courthouse.