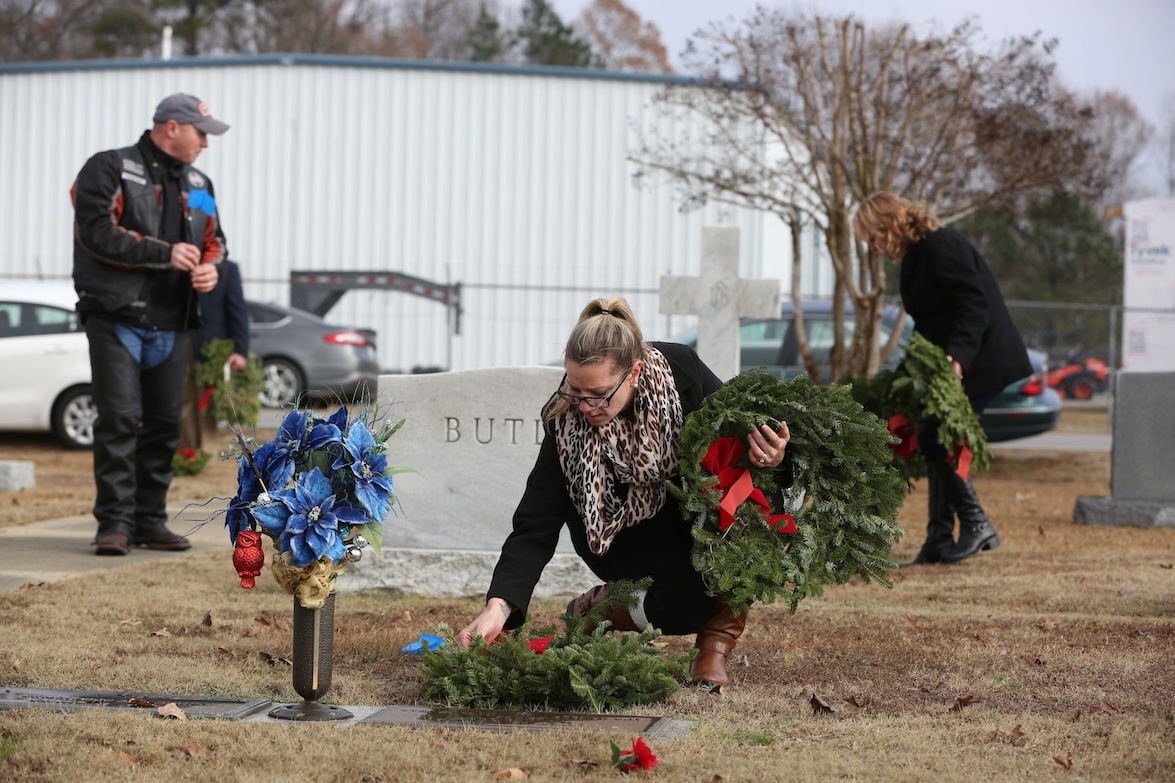 The annual Wreaths Across America honors military veterans with the placement of wreaths on graves at area cemeteries. Organizers are seeking wreath donations by Tuesday for the Dec. 18 wreath-laying observance at area cemeteries. 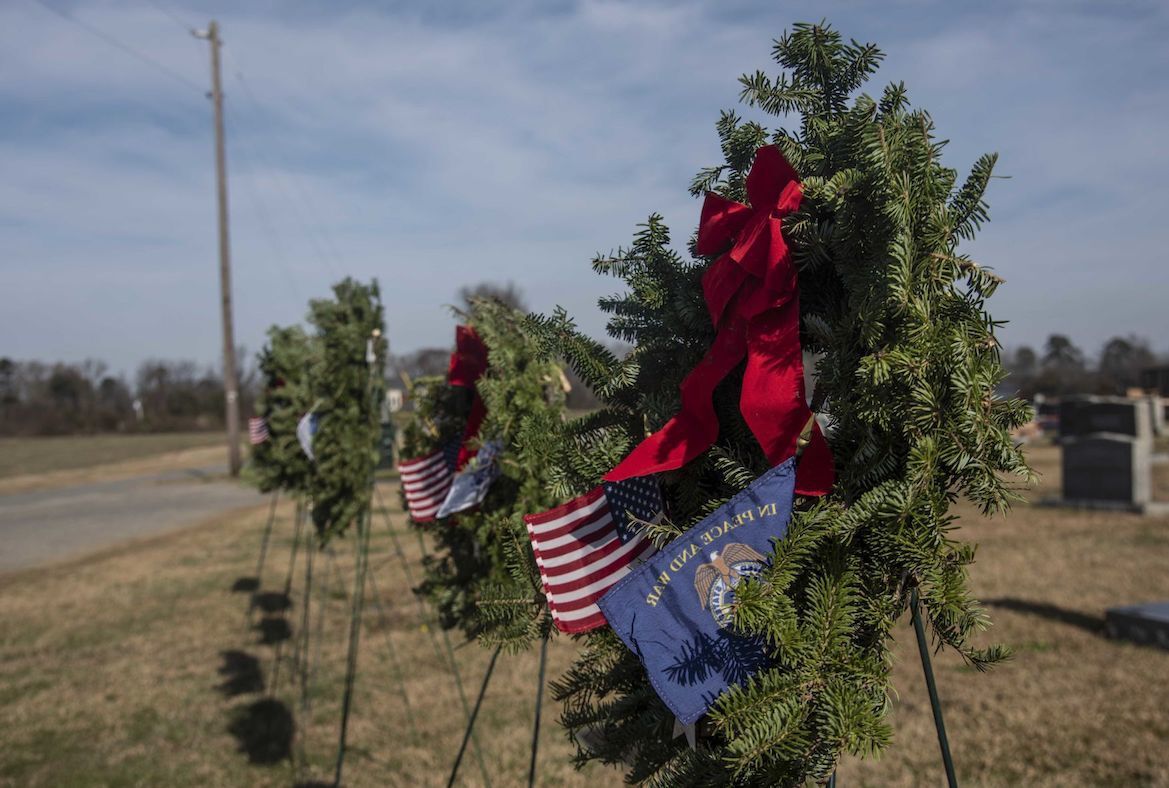 Wreaths are displayed in front of the Pikeville Cemetery during Wreaths Across America in 2020. Designated service members, including airmen at Seymour Johnson Air Force Base, represented their respective branches with a decorated wreath, paying tribute to the fallen.

The annual Wreaths Across America honors military veterans with the placement of wreaths on graves at area cemeteries. Organizers are seeking wreath donations by Tuesday for the Dec. 18 wreath-laying observance at area cemeteries.

Wreaths are displayed in front of the Pikeville Cemetery during Wreaths Across America in 2020. Designated service members, including airmen at Seymour Johnson Air Force Base, represented their respective branches with a decorated wreath, paying tribute to the fallen.

Tawnya Tucker is hoping for a Christmas miracle, one that she is hoping the community will help bring true.

She is not asking for herself, but to remember and honor veterans by laying remembrance wreaths on the graves of the county’s fallen heroes.

The miracle is the purchase of 1,725 wreaths through the Wreaths Across America program needed in time for the Dec. 18 wreath laying at the Eastern Carolina State Veterans and Evergreen Memorial cemeteries sponsored by the Wayne County Veterans and Patriots Coalition.

However, Tuesday is the deadline to purchase the fresh green wreaths that are adorned with red bows. A red keepsake tag is located on the back of the wreath that people who place it are allowed to take.

It says, “Today I placed a wreath on the grave of a hero.”

Wreaths are $15 each, and if people donate through the website, Wreaths Across America will donate a third wreath for every two purchased.

Along with donating online, people can send checks to Tucker at 550 Arabian Drive, Middlesex, N.C., 27557. Checks should be made payable to Wreaths Across America.

For more information or to purchase a wreath, or to volunteer, visit the Wayne County Veterans and Patriots Coalition website at www.wreathsacrossamerica.org/nc0149.

The Wayne County Veterans and Patriots Coalition will sponsor the wreath-laying ceremony at noon on Dec. 18 at the Eastern Carolina State Veterans Cemetery.

“It is a very special ceremony,” Tucker said. “It is very moving. I can’t imagine this not happening.

“Since I have been doing this since 2013, if it just ended it would just be a very sad thing.”

At 3 p.m., wreaths will be placed at Evergreen Memorial Cemetery. There will be no ceremony at the location, just wreath placement.

Because of the COVID-19 pandemic, only a few wreaths were placed last year by Tucker and her husband.

“I hated leaving the cemetery and seeing so many graves that did not have a wreath,” Tucker said. “It was just heart wrenching. It really is. I feel like I have let them down. We really need the community to come together and help save the day. We are way behind in the donations that we need.

Wreaths Across America is the nonprofit that places the wreaths at Arlington National Cemetery.

“In 1992, they had so many wreaths they didn’t know what to do with the wreaths so he remembered a childhood trip he took to Arlington,” Tucker said. “He was so moved by that trip that he remembered that.

“They contacted who they needed to contact so that they would be able to place some wreaths at the cemetery.”

He continued to do that for several years just quietly, she said.

“They just did that on their own as a family,” Tucker said.

In 2005, someone took a photo of the snow-covered cemetery with the green wreaths with red bows leaning up against the white headstones, Tucker said.

The photo was put on the internet, and it “just exploded,” and people wanted to know how they could help at Arlington and how they could have a similar program in their communities, she said.

In 2007, the Worcester family, along with veterans, and other groups and individuals who had helped with their annual veterans wreath ceremony in Arlington, formed Wreaths Across America, a nonprofit 501(c)(3) organization, to continue and expand this effort, and support other groups around the country who wanted to do the same.

Wreaths Across America has been held in Wayne County since 2013 when Tucker’s daughter Emily got it started.

They sought the help of the Wayne County Veterans and Patriots Coalition of which Tucker is a member. Her husband is retired from the Air Force.

She and her husband also have relatives who served in the military.

“It is just in our blood,” she said. “Emily was asked, when she was in high school, to sing the national anthem at the ceremony at Fort Bragg. We went there in 2007, not knowing what this was at all. We took to heart the ceremony that was just so moving.

“We are standing there thinking why is this not in Wayne County? Wayne County is a military community. We left and took with us the importance of honoring our veterans.”

When Emily graduated from college the idea of bringing the event to Wayne County came up again, Tucker said.

“So she is the one who started that,” Tucker said. “She started the process of finding out what needed to be done to bring this to the community.

“She started the ball rolling, and I took it over when she moved.”

For more information, email waagoldsboro@gmail.com. Additional details can be found online at www.facebook.com/waagoldsboro.