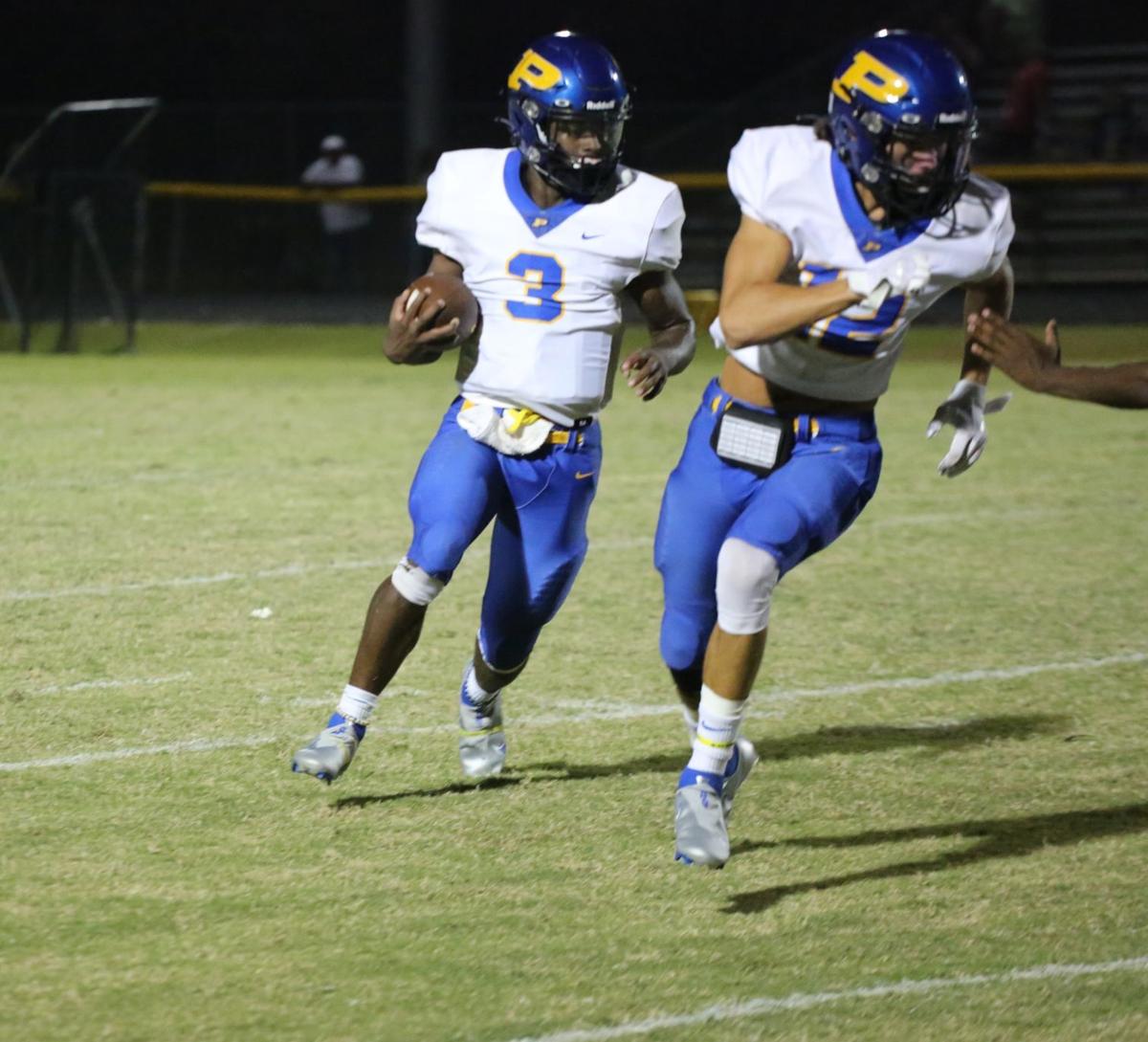 Princeton running back Christian Perris picks up a blocker as he looks to earn a first down. 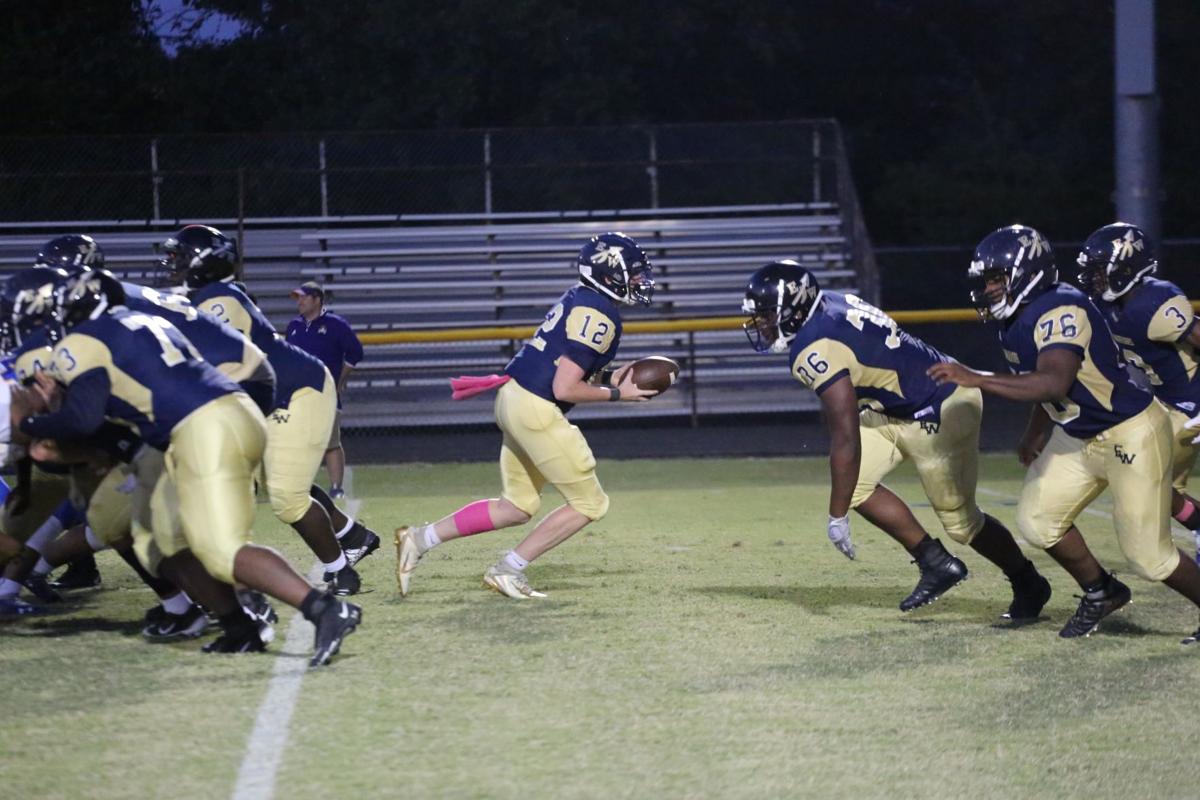 Above: Eastern Wayne quarterback Trevor Warren hands the ball off to fullback Demontae Robinson. Left: Princeton running back Christian Perris picks up a blocker as he looks to earn a first down.

Princeton running back Christian Perris picks up a blocker as he looks to earn a first down.

Above: Eastern Wayne quarterback Trevor Warren hands the ball off to fullback Demontae Robinson. Left: Princeton running back Christian Perris picks up a blocker as he looks to earn a first down.

The Princeton Bulldogs defeated the Eastern Warriors 28-6 on Friday night in a game that was much closer than the score would show.

Princeton received the ball first in the game, and moved the ball down the field with their running attack that has been effective for them all season.

On the seventh play of the drive, Princeton running back Jaydon Brooks fumbled the ball and Eastern Wayne took over at their own 26-yard line.

The Warriors used a mix of passing and running to march down the field, and on second and goal at the 5-yard line Dennislyn Swinson ran the ball up the middle for a touchdown.

The rushing touchdown gave the Warriors a 6-0 lead to start the game.

When Princeton took over on offense, they were once again unable to score. This time, it was a result of a great play made by Eastern Wayne cornerback Ali Brown. On the play, Princeton quarterback Paul Edens made a throw to the end zone that would have resulted in a touchdown, but Brown was able to get a hand on the ball to force the turnover on downs.

With Eastern Wayne getting the ball again after back-to-back defensive stops and a 6-0 lead, they put themselves in a good position to take a sizable lead. But as it would, all game turnovers hurt the Warriors early.

On the very first play after the stop by the defense, Warriors quarterback Trevor Warren threw a ball over the middle of the field that was intercepted by safety Christian Perris.

The Bulldogs started their drive following the pick at their own 40-yard line. Princeton finally was able to get their usually strong running attack going, and they marched 60-yards down the field on a drive that was capped off with a Jayden Brooks touchdown to give the Bulldogs a 7-6 lead.

The Warriors turnover problems continued on the next drive as Warren once again threw an interception to give the ball back to the Bulldogs. Paul Edens made the interception on defense and when the Warriors took over on offense, he helped lead them down the field.

Perris finished off the offensive drive for Princeton with a 35-yard touchdown run, and with the rushing touchdown by the Bulldogs the Warriors trailed 14-6 with 3:12 remaining until halftime.

In the second half, the Warriors received the ball first where C.J. Battle took over at quarterback because an injury Warren sustained at the end of the first half. On his first drive of the game, Battle helped Eastern Wayne march all the way down to the 10-yard line for first and goal. The Princeton defense stood strong though, and they stopped the Warriors offense from scoring.

When Princeton took back over on offense, they were able to score a long 90-yard drive that started on their own 10-yard line. Perris finished off the drive by scoring a 28-yard touchdown, which gave the Bulldogs a 21-6 lead.

Princeton head coach Travis Gaster said he was proud of how well Perris and his offensive played throughout the game.

“He ran the ball hard,” Gaster said. “Their game plan was to stop him, which is exactly what they should do. Coach (Leander) Oates did a great job with his game plan, but our (offensive line) just kept pounding and pounding.”

Perris scored again in the fourth quarter to put the game away. Perris finished the game with 122 yards and three touchdowns on 11 carries. His offensive performance helped lead the Bulldogs to a 28-6 win.

Gaster also said that it was really important to start off their conference play with a win on Friday night.

“That’s a great win,” Gaster said. “To kick off a new conference and a new classification by coming into someone else’s house (is great). That’s a good football team, and they’ve got some big kids and some unbelievable athletes.”

With the win Princeton, improved to 5-0 overall this season and 1-0 in the Neuse Six 2A Conference.

Eastern Wayne falls to 4-2 overall and 0-1 in the same conference.

Princeton faces Goldsboro on Friday at home at 7 p.m.

Eastern Wayne travels to Seven Springs on Friday to take on Spring Creek at 7 p.m.