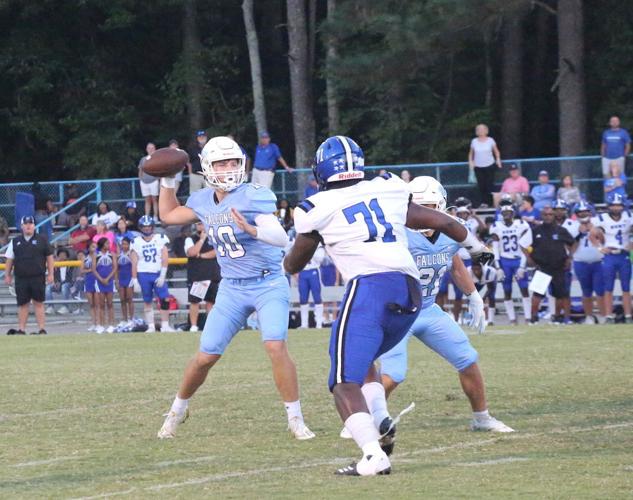 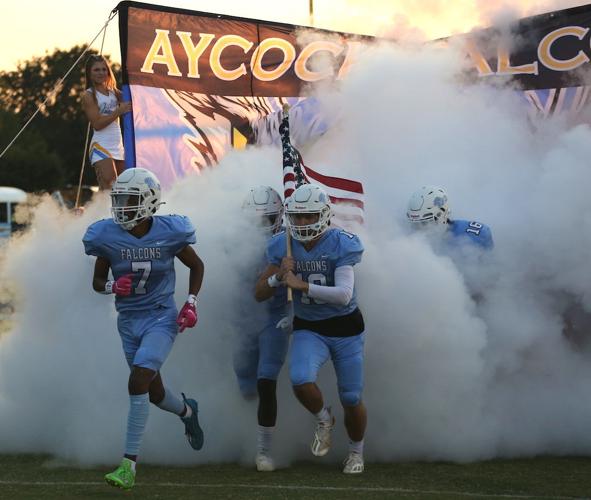 C.B. Aycock’s Ethan Brock holds the American flag as he runs out to the field with his teammates before the start of Friday night’s game. 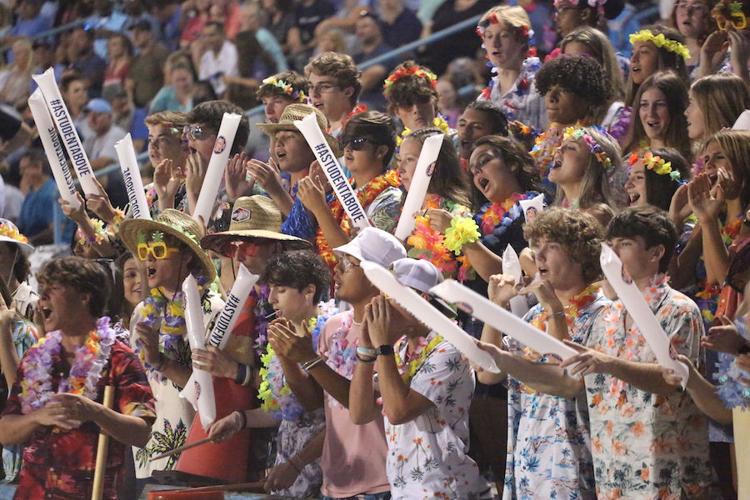 C.B. Aycock students cheer on their team as they deck out the student section in Hawaiian gear for the Friday night game.

C.B. Aycock’s Ethan Brock holds the American flag as he runs out to the field with his teammates before the start of Friday night’s game.

C.B. Aycock students cheer on their team as they deck out the student section in Hawaiian gear for the Friday night game.

PIKEVILLE — The C.B. Aycock Golden Falcons defeated the Hunt Warriors 10-7 on Friday night in a close defensive battle to remain undefeated this season at 4-0.

Hunt started the opening drive of the game from their own 42-yard line, but they were unable to get their offense going, and after a quick three-and-out they were forced to punt the football.

After the punt, the Golden Falcons took over at their own 26-yard line, and it didn’t take them long to march all the way down the field to the 6-yard line for first and goal. They were able to move down the field quickly thanks to the strong running from running back Daniel Fredrick, as well as the passing from quarterback Ethan Brock, which included a 28-yard strike to receiver Kamran Prince from the Hunt 34-yard line.

After a one-yard run on first down and false start before they could run a play on the next down, the Golden Falcons faced a second and goal from the 10-yard line. On the second down play, the center hiked the ball to Brock who delivered a perfect strike to Hayden Edmundson who was wide open in the end zone. Edmundson dropped the ball though, which was right in his hands, to bring up a third and ten for the Golden Falcons.

On the third down play, Brock was unable to deliver the ball with the same accuracy he had shown on third down and he overthrew Sterling Artis, which forced C.B. Aycock to settle for a 27-yard field goal. Golden Falcons kicker Bryson Fitzgerald had no problem with the 27-yarder though, and he hit it right down the middle of the uprights to give C.B. Aycock a 3-0 lead with 4:24 left in the first quarter.

After a fumble from Hunt, an interception from C.B. Aycock’s Brock, and a punt from Hunt, C.B. Aycock started their next drive at around their own 35-yard line. Brock didn’t seem too shaken up by the interception on the previous drive, and just a few plays into the current drive he completed a 35-yard pass from his own 45-yard line to Kamran Prince who was tackled down at the Hunt 20-yard line. The Golden Falcons were unable to advance the ball any further though and on fourth and 22, Brock fumbled the ball, and Hunt recovered it at their own 40-yard line.

The Warriors didn’t take advantage of the turnover though as they fumbled the ball on the very next play to give the ball to the Golden Falcons at the Hunt 33-yard line.

Both offenses continued to struggle and the next four drives were as follows: a C.B. Aycock punt, a Hunt punt, a C.B. Aycock intercepted pass, and a Hunt intercepted pass. The interception for C.B. Aycock came from cornerback Zimere McClarin who returned the ball all the way to the Hunt five-yard line. The great field position gave the Golden Falcons a chance to extend their lead, and they did just that on third down with a five-yard touchdown run from Daniel Fredrick. After a successful extra-point attempt, C.B. Aycock held a 10-0 lead with 2:20 left in the second quarter.

Top-ranked Georgia has history on its side vs. Missouri

In the second half, the offensive struggles for both teams continued, and the first score of the half did not occur until 3:58 was left in the fourth quarter. The opening score of the half came from Hunt on a 24-yard touchdown run to finish off a drive that started with 4:51 left in the fourth quarter, following a C.B. Aycock punt. The scoring drive, which took just 67 seconds, put them within three points of the C.B. Aycock lead with the score at 10-7.

Running out of time, Hunt attempted an onside kick to try to regain possession of the ball. The onside attempt was unsuccessful though and C.B. Aycock was able to run out all but 36 seconds of the game clock on their next drive. With one final stop, the Golden Falcons held on to win 10-7.

With the win, C.B. Aycock not only remained undefeated but also picked up their first win in the N.C. High School Athletic Association 3A East Conference.

Even with the win, C.B. Aycock head coach Thomas Zietlow said his team has a lot to work on, especially on offense. He also said that one of the biggest reasons for the offensive struggles was due to dropped passes by receivers.

“(We have to) Catch passes,” Zietlow said. “How many receivers did (Brock) hit in the hands in the end zone? We have to fix that, and that’s on me.”

The receivers were not all to blame though as Brock had five turnovers in the game, which included four interceptions and a lost fumble.

The highlight for the Golden Falcons offense was Fredrick who finished the game with 24 carries for 106 yards and a touchdown.

C.B. Aycock will face East Wake at home on Friday night at 7 p.m. where their bid for a perfect regular season continues.