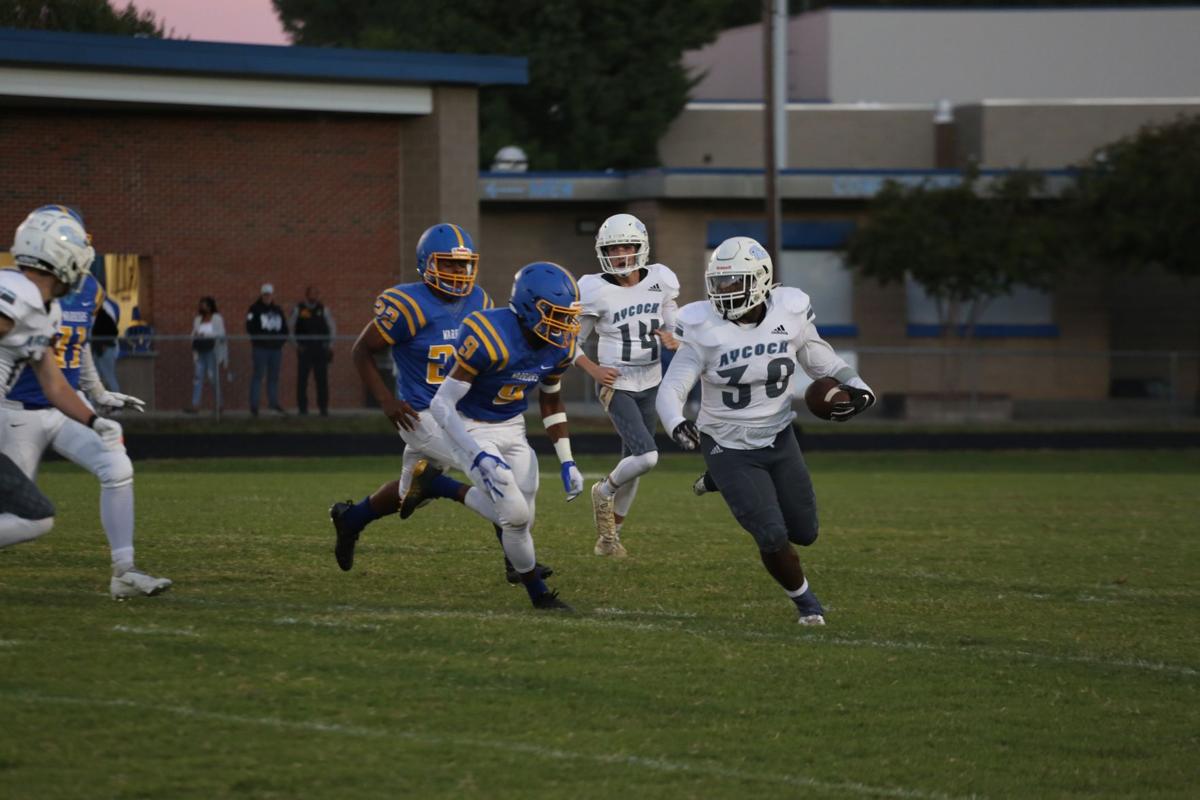 C.B. Aycock running back David Reid III finds open space as he looks to pick up a first down. 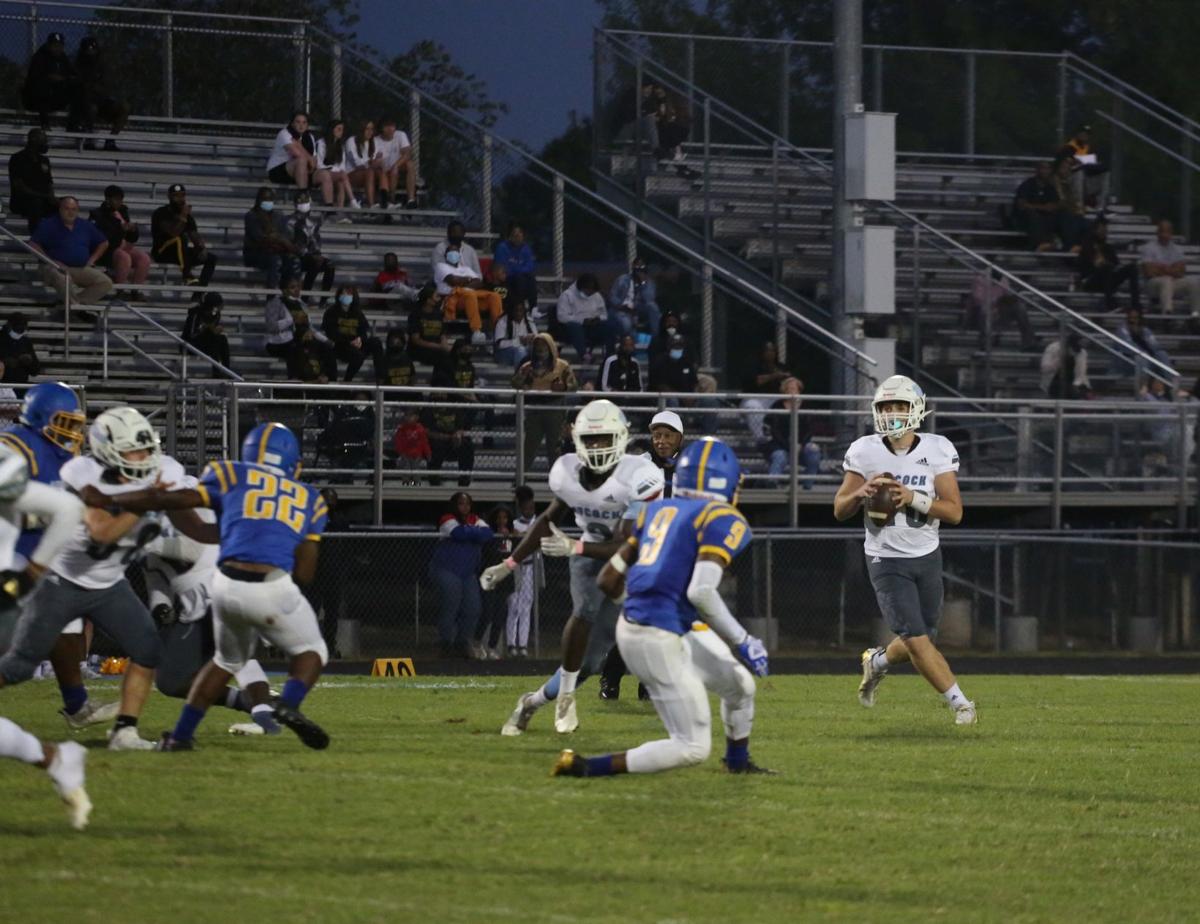 C.B. Aycock quarterback Ethan Brock scans the field as he looks to complete a pass. 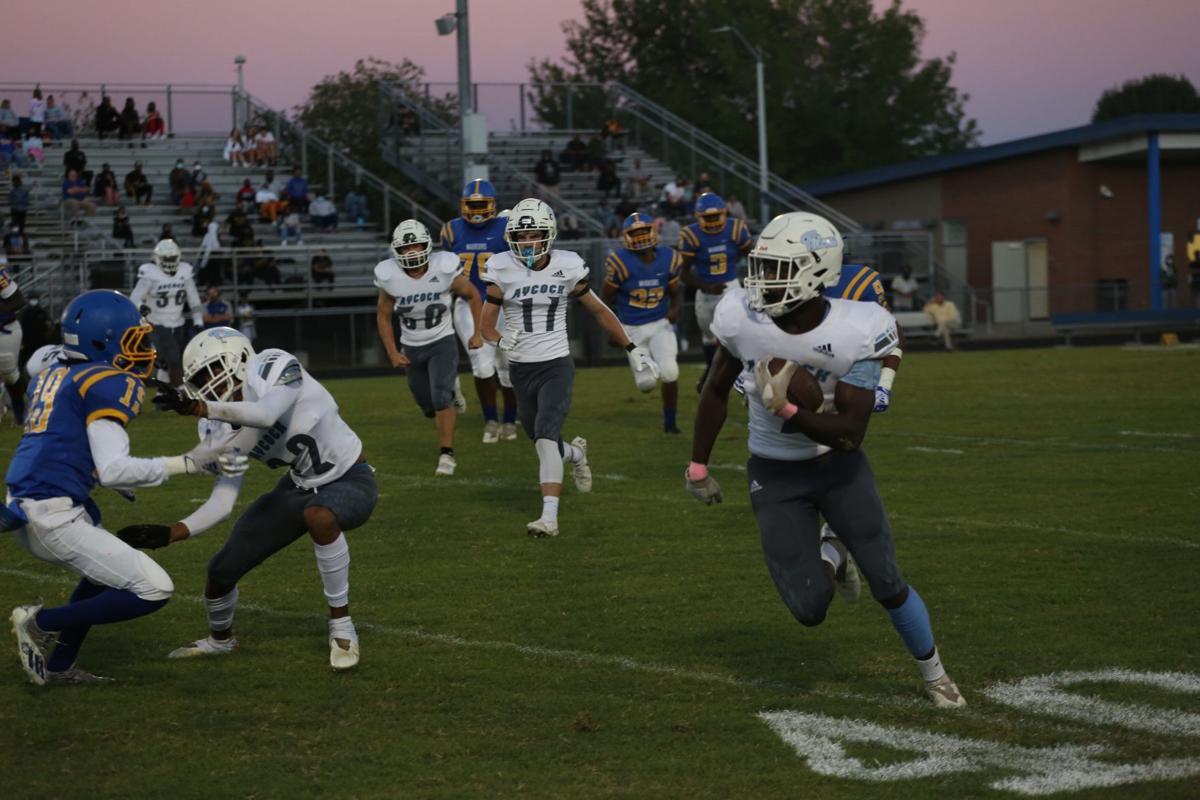 C.B. Aycock running back Daniel Frederick looks to pick up a first down on Friday against East Wake.

C.B. Aycock running back David Reid III finds open space as he looks to pick up a first down.

C.B. Aycock quarterback Ethan Brock scans the field as he looks to complete a pass.

C.B. Aycock running back Daniel Frederick looks to pick up a first down on Friday against East Wake.

With all of the success the Warriors had in the running game, the Golden Falcons began to pinch in close to the line, which left them susceptible to the passing game.

On second and three at the 25-yard line, the Warriors took advantage of the Warriors’ defensive formation by throwing the ball over the middle of the field, which resulted in a 25-yard touchdown score.

The touchdown came from quarterback Michael Perry to receiver Josiah Osborne, and after a successful 2-point conversion, East Wake led 8-0 with 9:48 left in the first quarter.

When the Golden Falcons took over on offense, they immediately fumbled the ball, and gave the football back to the Warriors.

East Wake took over on offense, but they were not able to have success like they did on the first offensive drive. After three plays, they were forced to punt the ball to C.B. Aycock.

The Golden Falcons took advantage of the great play by their defense, and they scored on a 3-yard passing touchdown from quarterback Andrew Matthews to receiver Tyler Horton with 2:07 remaining in the first quarter. After the Golden Falcons failed the extra-point attempt, the Warriors still led 8-6.

C.B. Aycock scored again less than two minutes later to take a 14-8 lead over East Wake with an incredible 40-yard pick-six from Daniel Frederick. The Golden Falcons linebacker read the pass by the East Wake quarterback, and was able to jump in front of the route to make the interception.

The Warriors answered back to retake the lead when they took over again offense. On a drive that started at the East Wake 42-yard line, the Warriors worked the ball all the way down the field before running back Elijah Keyes finished off the drive with a rushing touchdown. After converting on the 2-point try, the Warriors took a 16-14 which they held onto until halftime.

At the start of the second half, East Wake scored on a trick play, not often attempted at the high school level. Perry, who received the snap, tossed the ball backward to running back Shamar Privette who looked like he was going to run the ball, but instead the running back passed it to receiver R.J. Vick for a 55-yard touchdown. The trick play gave the Warriors a 22-14 lead with 9:43 in the third quarter.

The Warriors put the game out of reach with a 1-yard touchdown run with 1:53 left in the fourth quarter. The touchdown run came at the end of a 99-yard drive the lasted over 10 minutes. The long drive by East Wake took almost an entire quarter, and when the Golden Falcons received the ball back with under two minutes left in the game, they trailed 28-14.

C.B. Aycock was unable to score in their final possession, and East Wake held on to win 28-14.

C.B. Aycock head coach Thomas Zietlow said that although his team lost the game, he sees improvement from his players, and he wants them to be proud of the way they played.

“We played hard the entire game,” Zietlow said. “We missed some breaks, but I think we reduced the number of self-inflicted things that we had last week that really put us behind the eight ball.

“I told the kids that this loss was different. Losses are never good, but I feel like it’s a loss where we had a chance to be in (the game), whereas the last couple of weeks I don’t know if we had a chance after the game got going. I hope the kids take it as a positive that there is growth.”

C.B. Aycock plays again on Friday when they take on South Johnston (4-1) at home at 7 p.m.