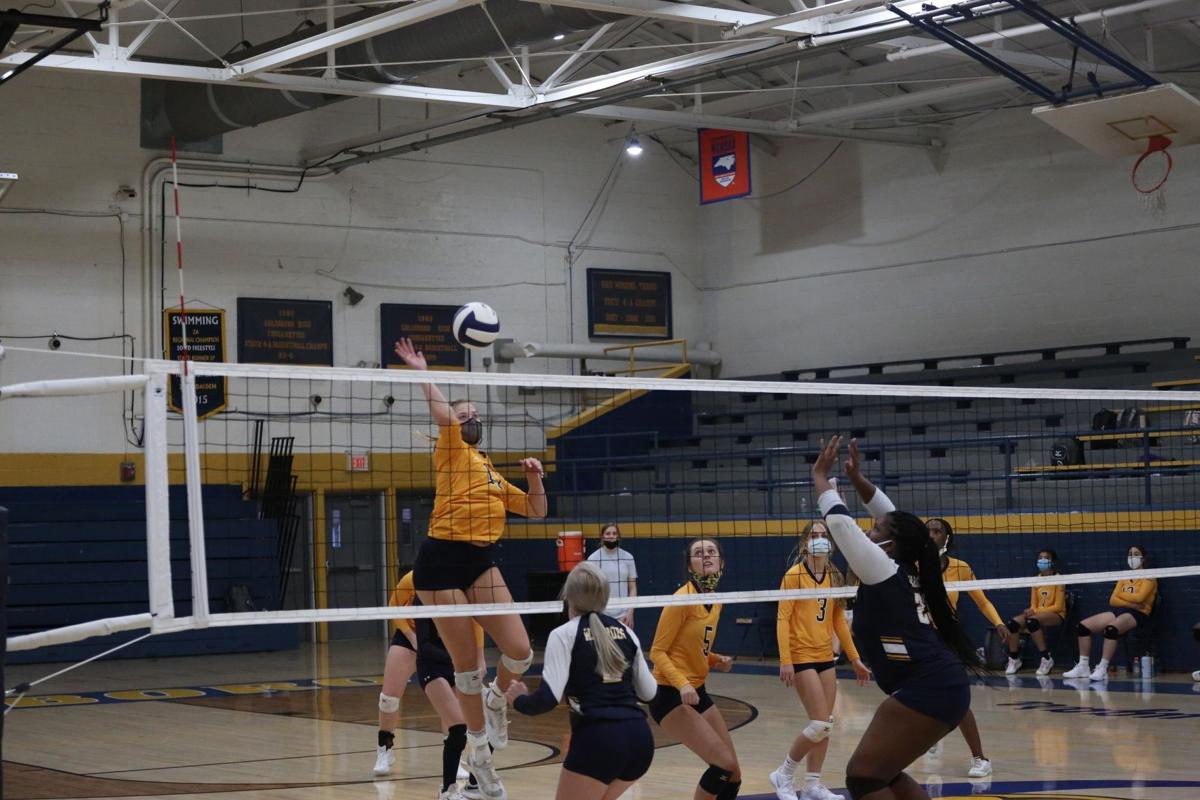 Goldsboro’s Hallie Brown spikes the ball as Eastern Wayne works to keep the ball in play. 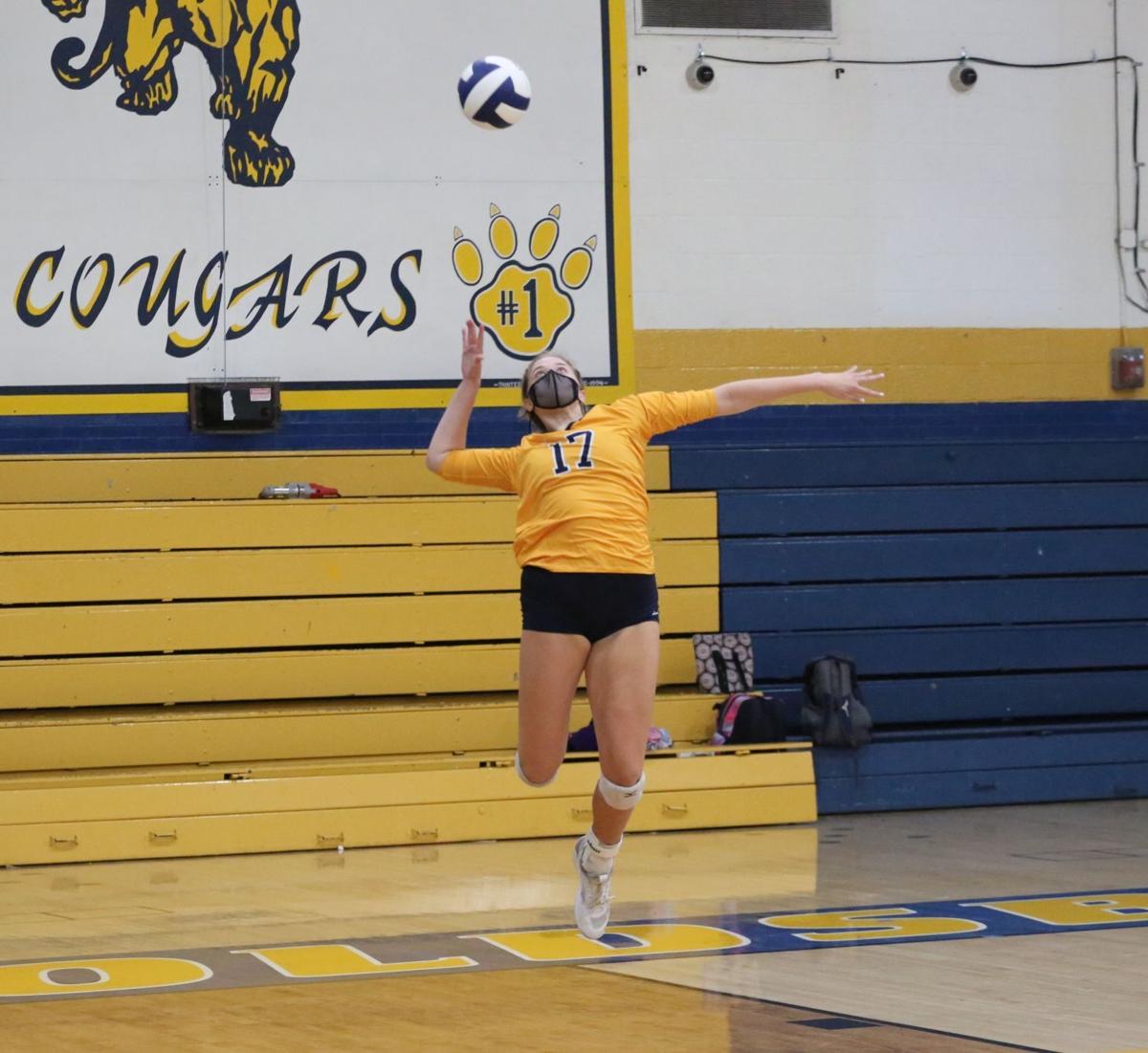 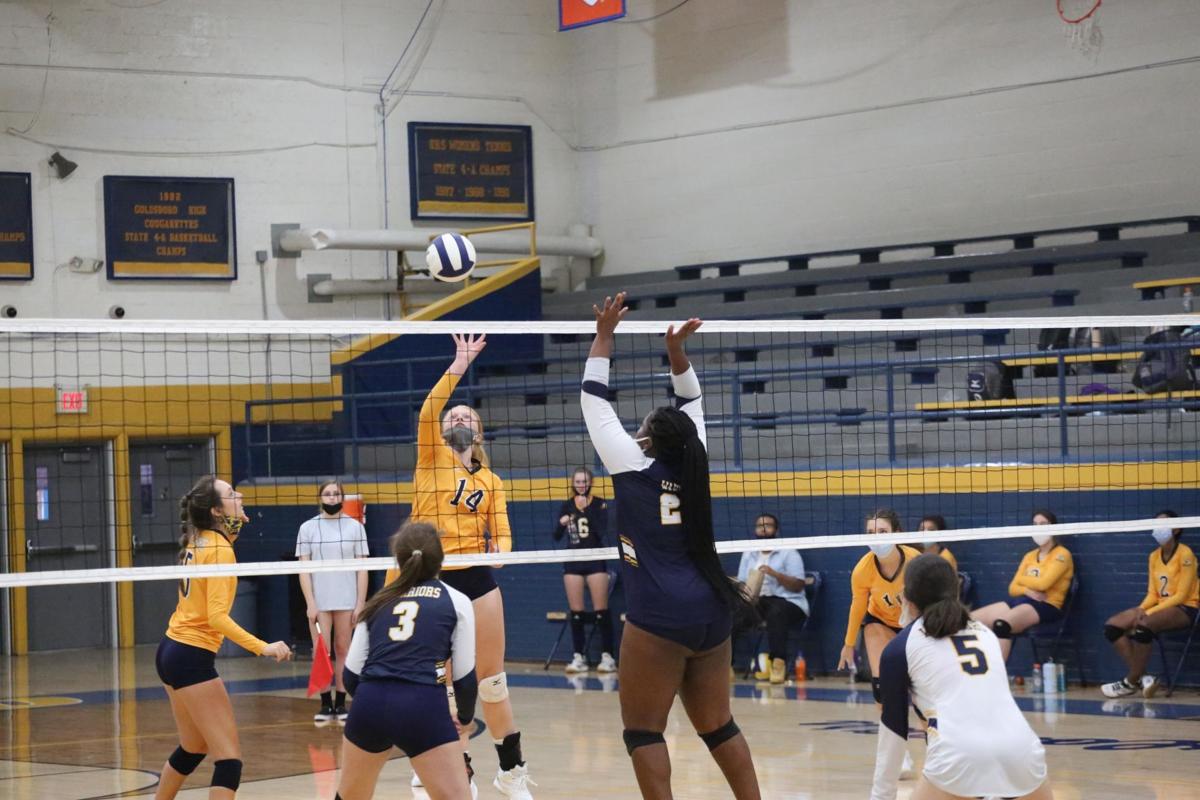 Goldsboro’s Brianna Moye tips the ball over the net against Eastern Wayne.

Goldsboro’s Hallie Brown spikes the ball as Eastern Wayne works to keep the ball in play.

Goldsboro’s Brianna Moye tips the ball over the net against Eastern Wayne.

The Cougars started off the match by taking an early 9-2 lead in the first set. Goldsboro was able to take an early lead by serving well, and controlling the net.

The Warriors made a comeback after trailing early, and they cut Goldsboro’s lead to one point to make the score 10-9. The rest of the set was a competitive battle with both teams breaking serve. With the score at 19-16 in the Cougars’ favor, it was Hallie Brown’s turn to serve. With the help of her teammates, Brown won six serve points in a row, and Goldsboro took the first set 25-16.

The second set started off as another competitive battle with neither team able to take a decisive lead over the other. With Goldsboro holding just a three-point lead, Doris Ajagbe stepped up to the line to serve. Ajagbe was able to hold serve for seven points in a row, and give the Cougars a 17-7 lead. Goldsboro was able to add on to their lead even more, and take the second set 25-11.

In the final set of the match, the Cougars dominated from start to finish, and they only allowed the Warriors to score a total of eight points. A big reason for the Cougars’ ability to control the set was great serving from both Elizabeth Howell and Aaliyah Williams-Bryant.

Howell began serving with Goldsboro leading 7-4, and won five straight service points to give the Cougars a 12-4 lead. Williams-Bryant took over at the end line with the score at 17-6 in Goldsboro’s favor, and helped the Cougars to win seven straight points to take a 24-6 lead. The Warriors won only two more points after Williams-Bryant’s last serve before eventually losing the set 25-8.

Goldsboro head coach Pamela Tart said her team realized they needed to improve after the loss to Princeton on Sept 16, which motivated them to get better as a team.

“We’ve been working,” Tart said. “Obviously, we took that hard loss to Princeton. We weren’t too thrilled about that, so ever since then, (I have been preaching) defense, defense, defense. Some of the teams are maybe not as strong in caliber as Princeton, but (after) games, we start working on things (to improve on), and that’s what we are going to do right now.”

Goldsboro has now won three straight matches following its earlier loss to Princeton. In those matches, they have not lost a single set.

With the win on Tuesday, Goldsboro improved to 8-5 overall and 4-1 in the Neuse Six 2A Conference. Eastern Wayne is 2-7 overall and 0-3 in the same conference.