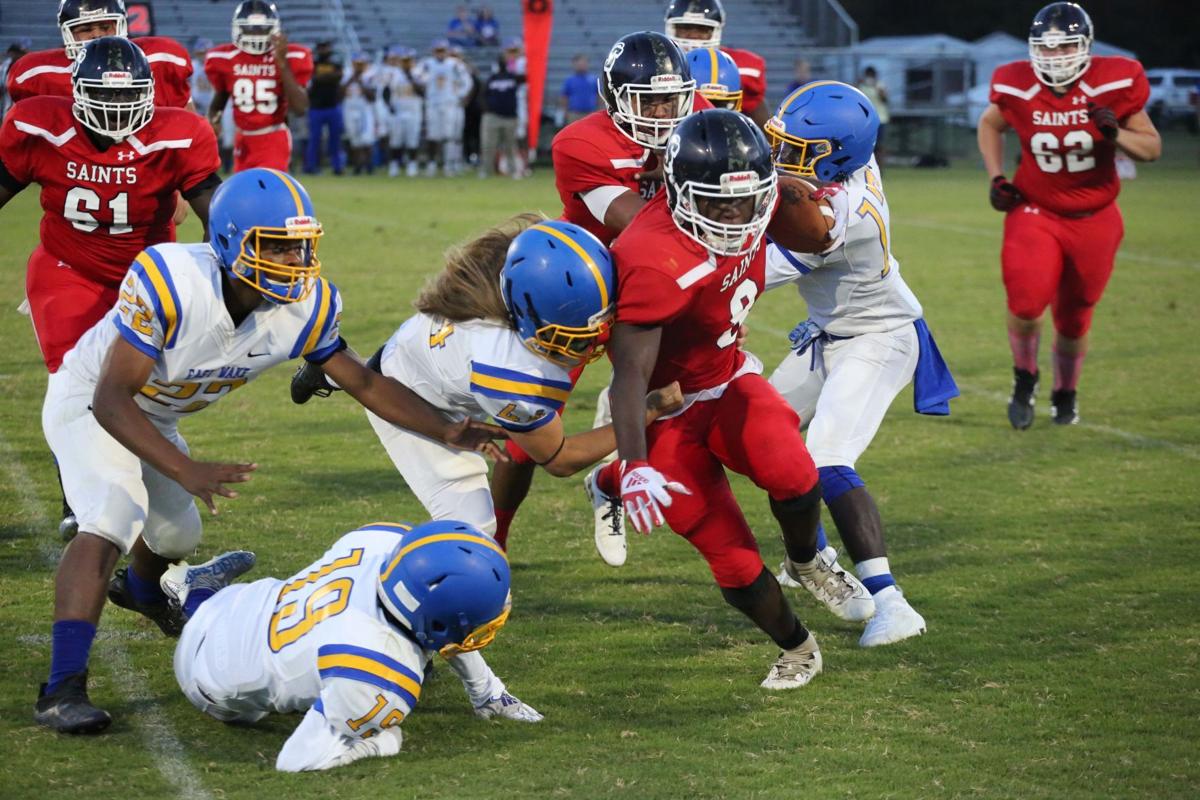 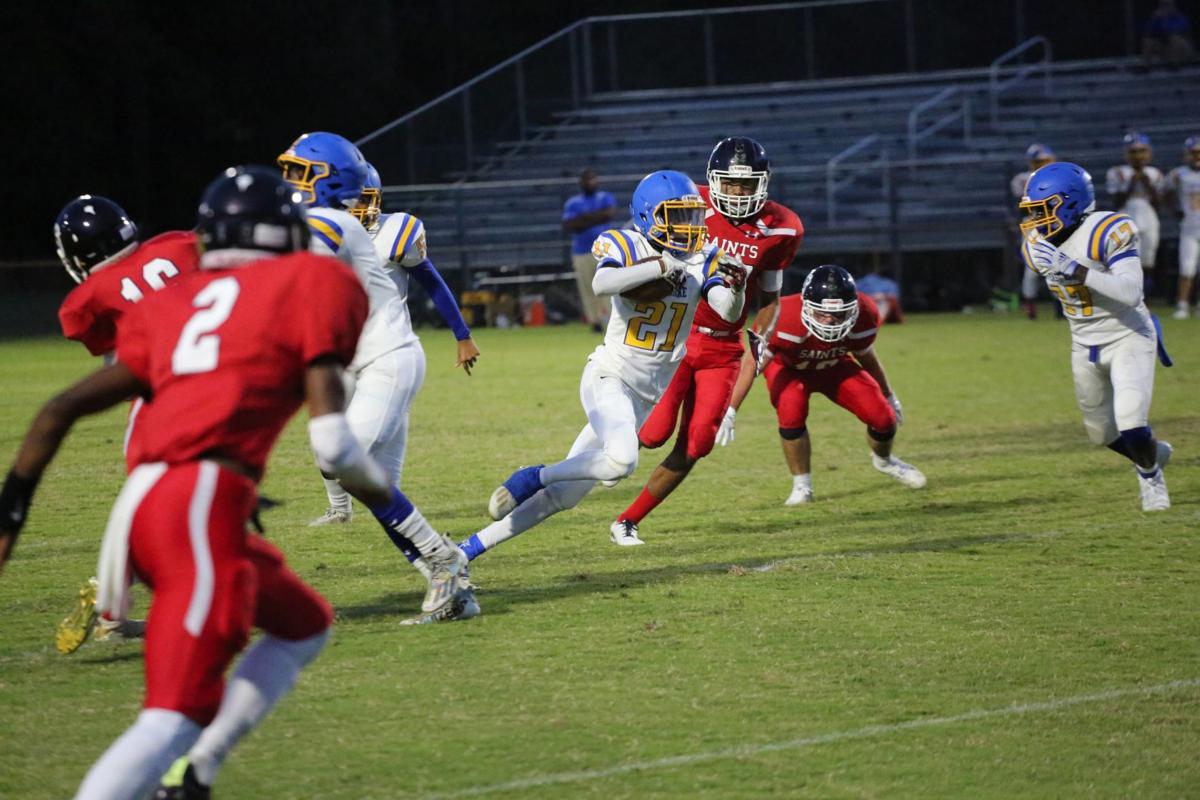 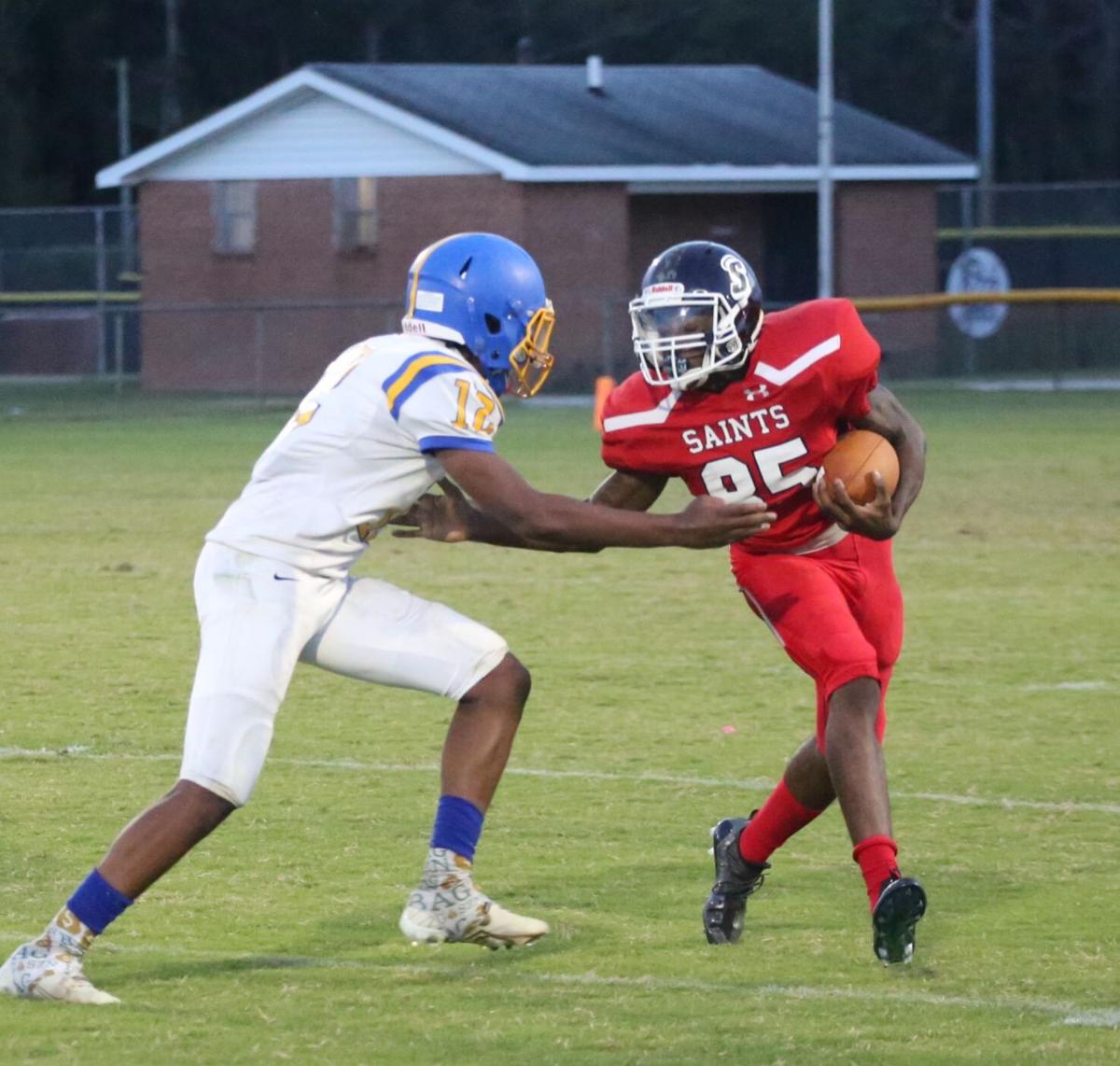 Southern Wayne receiver Tyquavious Williams stiff-arms an East Wake defender as he tries to pick up a first down.

Southern Wayne receiver Tyquavious Williams stiff-arms an East Wake defender as he tries to pick up a first down.

The East Wake Warriors defeated the Southern Wayne Saints 52-12 on Tuesday night in a game that was dominated by East Wake from the start.

Th Warriors started off the game with a bang by scoring two touchdowns on two possessions.

The first score was a rushing touchdown from Deaunti Lucas who ran it in to give East Wake a 6-0 lead with 8:24 remaining in the first quarter. The second score came on a 45-yard touchdown pass from quarterback Michael Perry to receiver R.J. Vick to give them a 14-0 lead.

With Southern Wayne already trailing by two touchdowns, the Saints defense gave up another touchdown in the second quarter with a rushing touchdown from Perry who also threw the Warriors last touchdown pass.

The rushing touchdown gave the Warriors a 22-0 lead with 10:17 in the second quarter.

In a half that was all Warriors, East Wake scored again with 3:22 left before halftime when Perry and Vick once again hooked up for a touchdown pass and catch. The final touchdown of the half gave the Warriors a 30-0 halftime lead.

In the second half, the Saints came out playing much better than they had in the first half. On one of the first drives of the half, the Saints marched all the way down the field to score their first touchdown of the game. The touchdown came from quarterback Joshua Kornegay who completed a pass to receiver Tyquavious Williams to make the score 30-6 with 5:28 remaining in the third quarter.

Southern Wayne scored again on their next drive after stopping the East Wake offense. The score came just one play after a pass interference penalty was called on the Warriors, which gave the Saints an automatic first down. The Saints scored on the very next play with another touchdown pass by Kornegay with 2:41 in the third quarter to make the score 30-12.

After scoring back-to-back touchdowns, the Saints were unable to keep the comeback going and just over two minutes later, East Wake scored again to bump their lead back up to 24 with the score 36-12.

The East Wake touchdown seemed to be the final blow for Southern Wayne, and after the score they were unable to get going again on offense.

East Wake continued to push their lead even further and when the game ended it was East Wake that came out on top by a score of 52-12.

With the loss, Southern Wayne fell to 1-4 overall, and 0-2 in Quad County 3A Conference play.

Southern Wayne will face South Johnston next in Four Oaks on Friday.