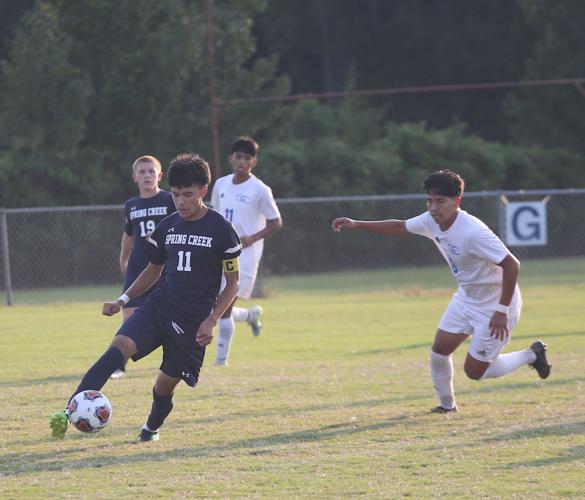 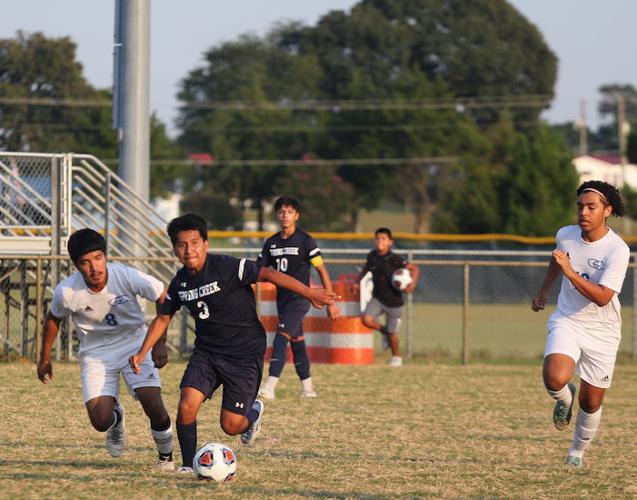 Spring Creek’s Bryan Lopez Sanchez pushes the ball downfield as he tries to finish off the counter attack with a goal. 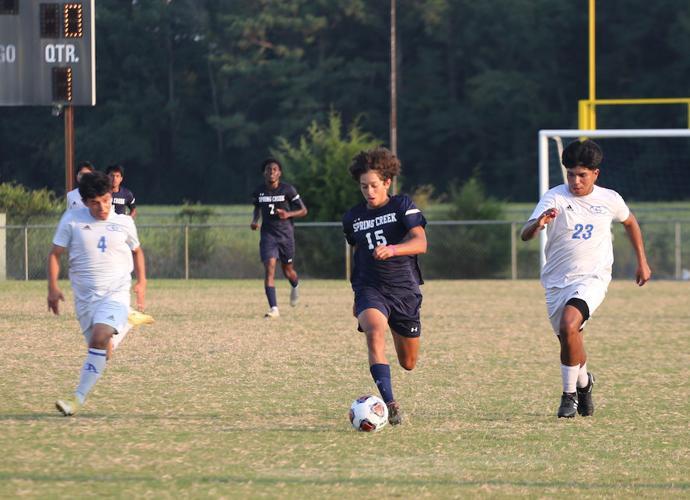 Spring Creek winger Anthony Valentine has his sights set on the goal as he dribbles past several Greene Central defenders.

Spring Creek’s Bryan Lopez Sanchez pushes the ball downfield as he tries to finish off the counter attack with a goal.

Spring Creek winger Anthony Valentine has his sights set on the goal as he dribbles past several Greene Central defenders.

SEVEN SPRINGS — Twenty minutes into Thursday night’s match, Bryan Lopez Sanchez scored a goal to give the Spring Creek Gators a 1-0 lead against the Greene Central Rams, but the Gators’ lead didn’t last, and the Rams came from behind to win the match 2-1.

After dropping two matches, including one in the third round of the N.C. High School Association 2A playoffs to the Rams last season, Spring Creek set its sights on the Rams this season.

However, the Gators dropped their first match against the Rams on Aug. 19, so the Gators were determined to get the win Thursday night.

Spring Creek started Thursday’s match full of energy, and after controlling most of the possession early on, Spring Creek found the back of the net to take a 1-0 lead in the 20th minute.

After falling behind, the Rams became more aggressive as they pushed higher up the field and tried to create more goal-scoring opportunities.

The Rams’ strategy paid off in the 30th minute when Green Central scored off a corner kick to tie the game at 1-1.

In the second half, Spring Creek came onto the field and began to attack the goal with a similar intensity that they had at the beginning of the first half.

Many of these attacks started with a long pass to Anthony Valentine, who used his speed to beat the defenders guarding him down the left wing.

Although he created several goal-scoring chances, Valentine could not capitalize on any of those chances because of the strong play from the Greene Central goalkeeper, who was able to stretch out and block Valentine’s shots.

No. 9 Oklahoma State visits No. 16 Baylor in rematch of Big 12 title game

In the 62nd minute, during one attack by Valentine, he accidentally collided with the goalkeeper, who shoved Valentine after being knocked to the ground.

That play fired up the Greene Central players, and on the next play, after the Greene Central goalkeeper was pulled from the game by his coach to give him a chance to cool down, the substitute goalkeeper started an attack that resulted in a goal to give the Rams a 2-1 lead in the 63rd minute.

Spring Creek attempted a comeback of its own, but the Gators could not recover the intensity they had at the beginning of each half.

The Gators continued to hit several long balls forward to Valentine, but the Greene Central defenders cut off the passes, and the Rams held on to win 2-1.

Spring Creek head coach Miguel Torres said he liked the Gators’ opening intensity, but they should have pushed forward to try to earn a second goal instead of sitting back after taking an early 1-0 lead.

“I just think we let off the gas,” Torres said. “We were winning, and we were in control of the game, and we just let them get back into it, and we weren’t able to put them away. But credit to Greene Central. They are really tough opponent.”

With the loss, Spring Creek fell to 6-3-1 this season, while Greene Central improved to 8-3.

The Gators will look to bounce back at home against East Duplin on Monday at 6 p.m.