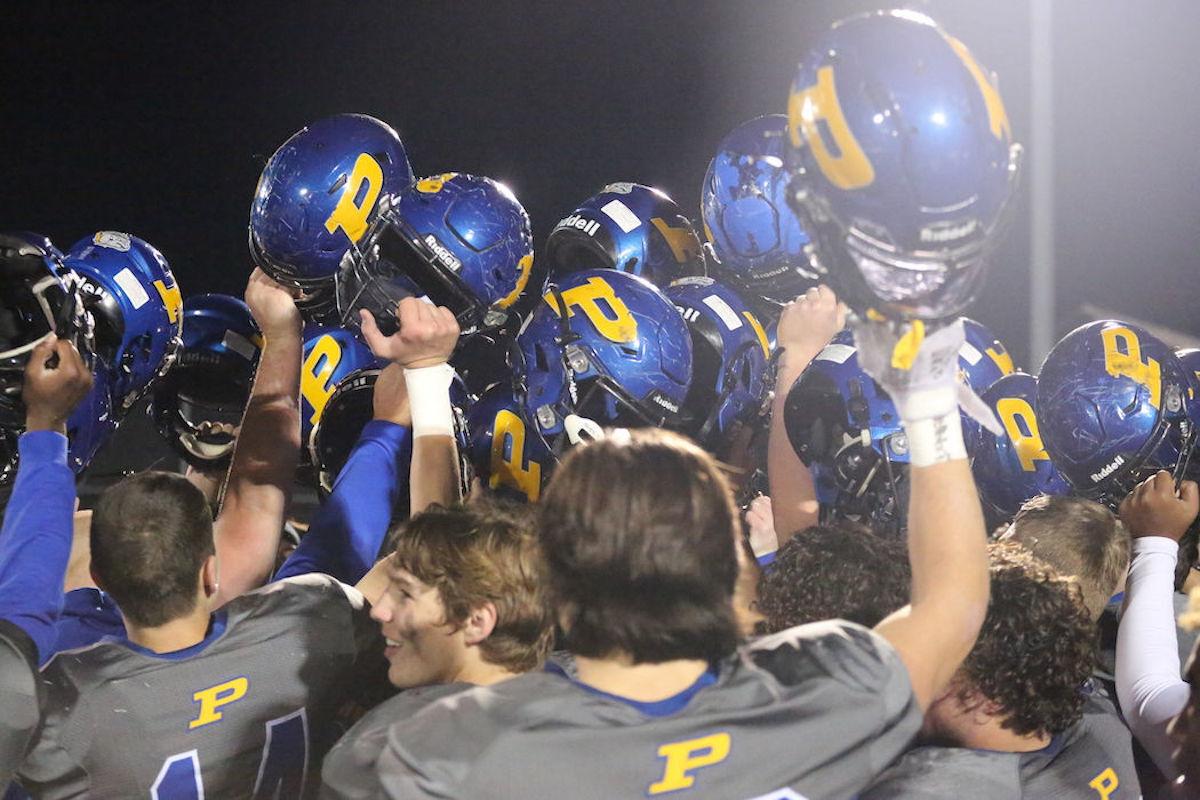 The Princeton Bulldogs celebrate their win over St. Pauls on Friday night. 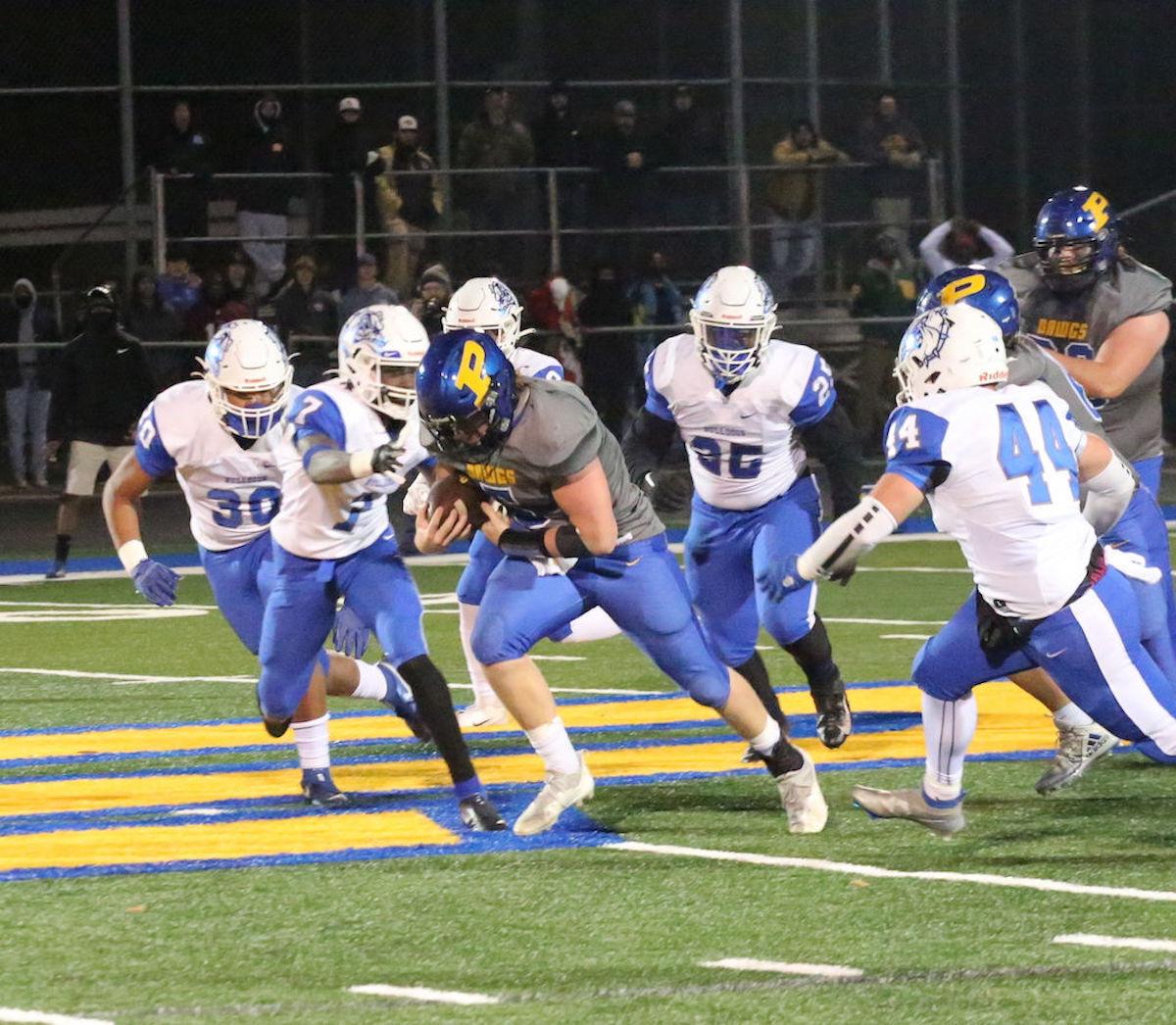 Princeton running back Paul Edens breaks a tackle before picking up a first down.

The Princeton Bulldogs celebrate their win over St. Pauls on Friday night.

Princeton running back Paul Edens breaks a tackle before picking up a first down.

Coming into Friday night’s matchup, both No. 4 ranked St. Pauls (11-0) and No. 1 ranked Princeton (12-0) held undefeated records, and easily won their respective conferences.

After both teams failed to score on their opening drives, St. Pauls opened up the scoring with 5:05 in the first quarter. The score came on an 8-yard pass from quarterback Mikail Breeden to receiver K.J. Jones in the back of the end zone on fourth down and seven.

Following the score, Princeton kicker McKinley Uzzell kicked a squib kick to avoid a long kickoff return. The short kick gave St. Pauls the ball at the 49-yard line, and they used that great field position to their advantage on the very next play when running back Kemarion Baldwin ran the ball 51 yards for a touchdown. After converting the two-point conversion, St. Pauls took a 16-6 lead over Princeton.

Princeton once again answered back after falling behind, and this time it was Christian Perris who scored a rushing touchdown with 4:46 in the second quarter to make the score 16-13.

The 1-yard touchdown was set up by Paul Edens who ran the ball for a 43-yard gain on the previous play before being tackled at the 1-yard line.

St. Pauls took over on offense following the kickoff, and on their next drive they used up almost all of the remaining time in the half before scoring to take a 22-13 lead. The score came from Baldwin again on a 3-yard run, and after his score, only 29 seconds remained in the half.

In the second half, Princeton received the ball first, and their drive started at the 50-yard line because of a good kick return by Perris.

On the first play after the return by Perris, running back Brandon Turner found a gap to run through and gained 39 yards before being tackled at the 11-yard line. Perris finished off the drive with a touchdown, and after the two-point conversion Princeton cut the St. Pauls lead to one point with the score 22-21.

Just two minutes later, St. Pauls’ Baldwin scored his third touchdown of the game to extend the lead to 28-21. After the score, St. Pauls went for a two-point conversion, and they were unsuccessful, which meant Princeton was just a touchdown and extra point away from tying the game.

On the next drive, Princeton was able to quickly march down the field and tie the game with a touchdown from Edens and an extra-point kick by Uzzell. On the next Princeton drive, Uzzell scored a field goal to give Princeton a 31-28 lead, which was their first lead of the game.

“Just having the option to kick a field goal is something that’s so out of my realm,” Gaster said. “What a blessing on fourth and seven to not have to go for it down there.”

With Princeton holding just a three-point lead with less than six minutes remaining in the quarter, St. Pauls received the ball at their own 32-yard line. On the first play after the kickoff, Baldwin broke free and ran it all the way to the end zone, but the touchdown was called back due to a holding penalty. Two plays later, Baldwin fumbled, giving the ball back to Princeton.

On the next St. Paul offensive possession, Breeden was intercepted by safety Peyton Mitchell at the 11-yard line. Breeden’s interception all but sealed the game, and St. Pauls was never able to score again.

Perris scored his third rushing touchdown of the game with 1:43 to give Princeton a 45-28 lead, which was also the final score.

Perris finished the game with 247 rushing yards on 34 carries.

Princeton outscored St. Pauls 32-6 in the second half and 17-0 in the fourth quarter in the victory against St. Pauls.

Gaster said the biggest reason for his team’s success in the second half was their mindset.

“We start every second half saying the scoreboard is 0-0 no matter what it says,” Gaster said.

With the win, Princeton improves to 13-0 and advances to semifinals of the NCHSSA state playoffs. St. Pauls finished the season with a record of 11-1 with the loss.

Princeton will take on No. 2 ranked Wallace-Rose Hill (12-2) on Friday night in Princeton at 7:30 p.m. for a chance to advance to the NCHSAA state playoff championship game.