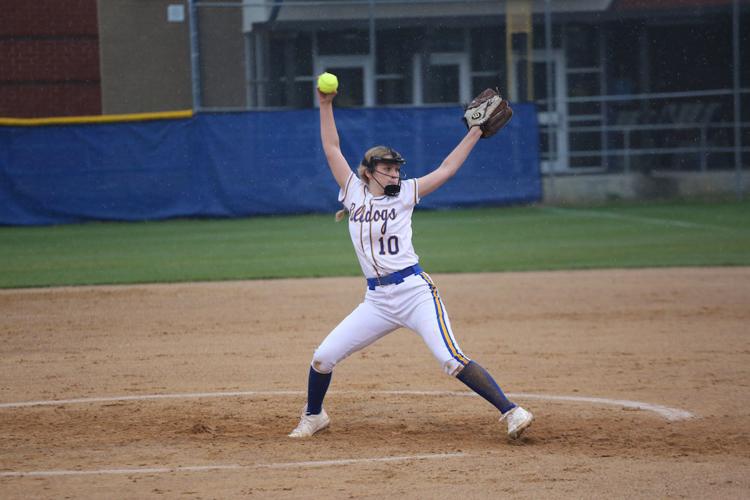 Princeton Bulldogs pitcher Graci Martin winds up before her pitch as the rain comes down on Tuesday night. 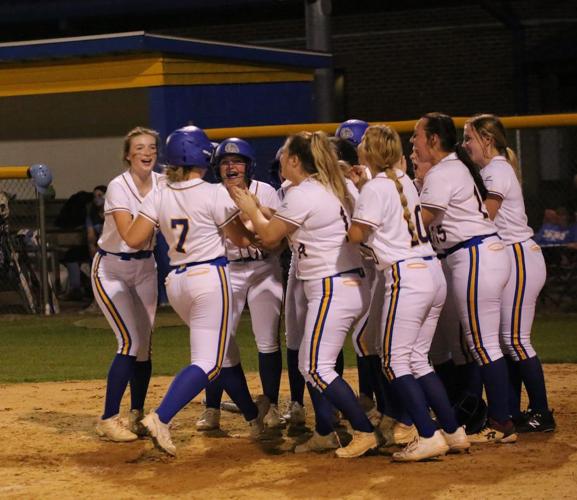 Princeton’s Lilly Holmes celebrates with her teammates at home plate after hitting a 3-run home run on Wednesday night against Beddingfield.

Princeton Bulldogs pitcher Graci Martin winds up before her pitch as the rain comes down on Tuesday night.

Princeton’s Lilly Holmes celebrates with her teammates at home plate after hitting a 3-run home run on Wednesday night against Beddingfield.

PRINCETON — Up 6-1 heading into the bottom of the third inning, it looked as if Princeton was going to come away with an easy victory on Tuesday night.

However, before the bottom of the third inning could get started, the game was delayed until the next day due to heavy rain.

The rain delay was the last thing Princeton would have hoped for in a game with such high stakes. With a win, Princeton would remain undefeated at 11-0 overall and stay in first place in the Neuse Six 2A Conference at 7-0.

However, a loss for the Bulldogs would result in the Bruins claiming first place at 7-0, with the Bulldogs dropping to 6-1.

When play resumed on Wednesday, the Bruins seemed to come out with a newfound intensity, while Princeton seemed to relax and be at ease with its five-point lead.

After not allowing the Bulldogs to score a single run in the bottom of the third, Beddingfield started off the top of the fourth inning by loading the bases with no outs.

The next batter up for the Bruins was Olivia Yount, who hit a two-RBI double to cut the Princeton lead to three.

After striking out the next batter, Princeton starting pitcher Graci Martin gave up an RBI single to Beddingfield batter Kirsten Myers to make the score 6-4.

Beddingfield scored again with two outs in the inning to cut the game to one run before Princeton was finally able to escape the top of the fourth.

Princeton head coach Charley Cox said the rain delay had a big effect on the way her team played at the beginning of Wednesday’s game.

“I think that affected us a lot. We were up 6-1 heading into the bottom of the third, and I think we were on a roll,” Cox said.

Cox, who is normally calm on the softball field, laid into her team as they came back to the dugout following the top of the fourth inning. She told all of her players to “act like they wanted to be there.”

The message clearly got across to the Bulldogs, and they scored three runs in the inning to take a 9-5 lead.

In the bottom of the fifth inning, the Bulldogs put away the game thanks to back-to-back out of the park home runs.

The first home run was a 3-run shot by Lilly Holmes, which gave Princeton a 12-6 lead. The second homer was a solo home run from Averie Daughtery that extended the lead to seven.

RBI singles from Martin and Gracie Whittemore gave the Bulldogs a 15-6 lead heading into the sixth inning.

The Bulldogs scored again in the sixth inning to take a 16-6 lead, triggering the 10-run mercy rule.

Cox said that she was proud of her players for stepping up in a game that could decide the conference winner.

“They knew this was a big game and this (could decide) their conference because we were both undefeated in conference,” Cox said. “I told them you can beat this team, and they proved that.

“They hit the ball hard tonight, and that’s what you have to do to win.”

Princeton’s next game will be a rematch against Beddingfield on Friday night in Wilson at 7 p.m. The game between the two sides will once again have huge conference and state playoff implications.