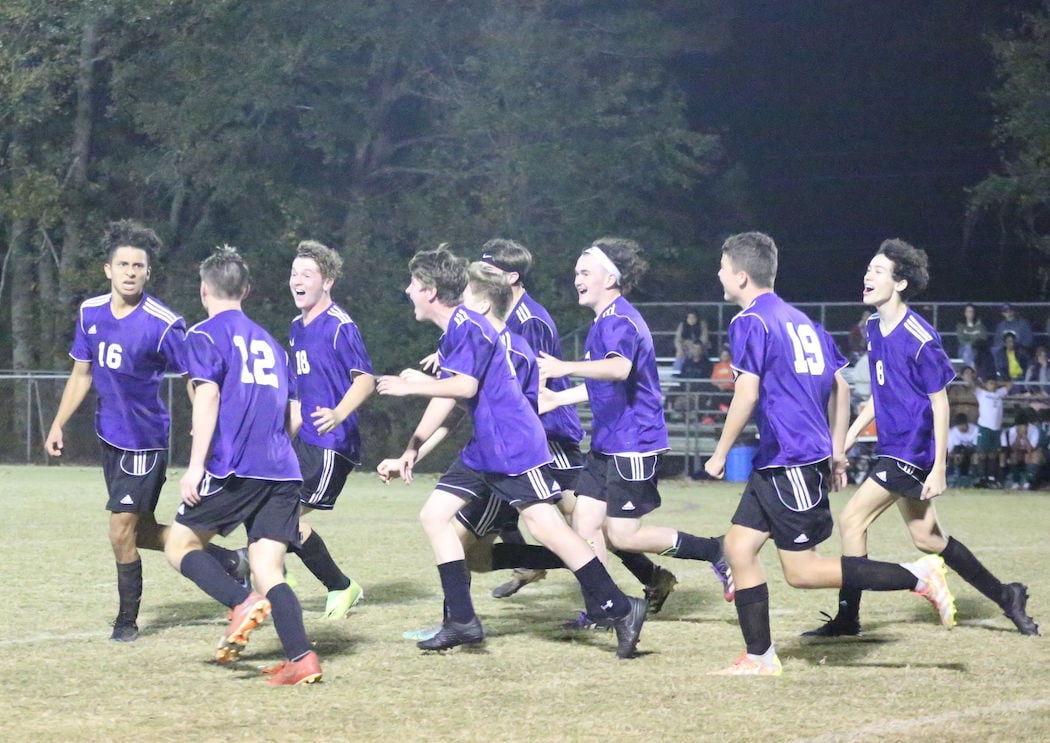 Rosewood’s Aaron Zamora celebrates with his teammates after scoring the game winning goal against North Moore. 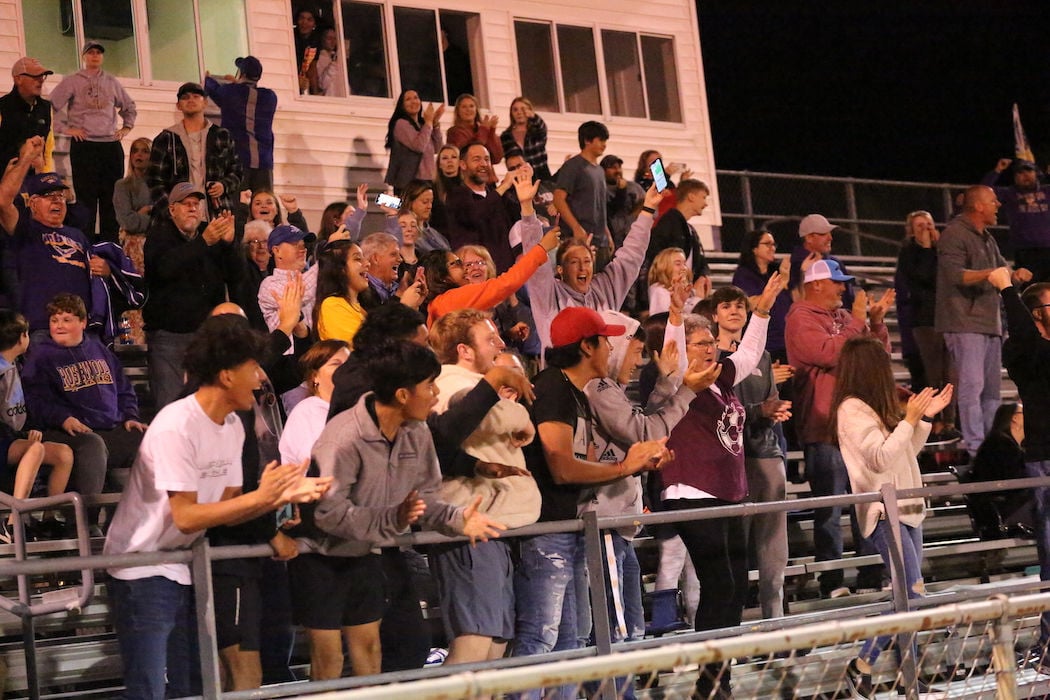 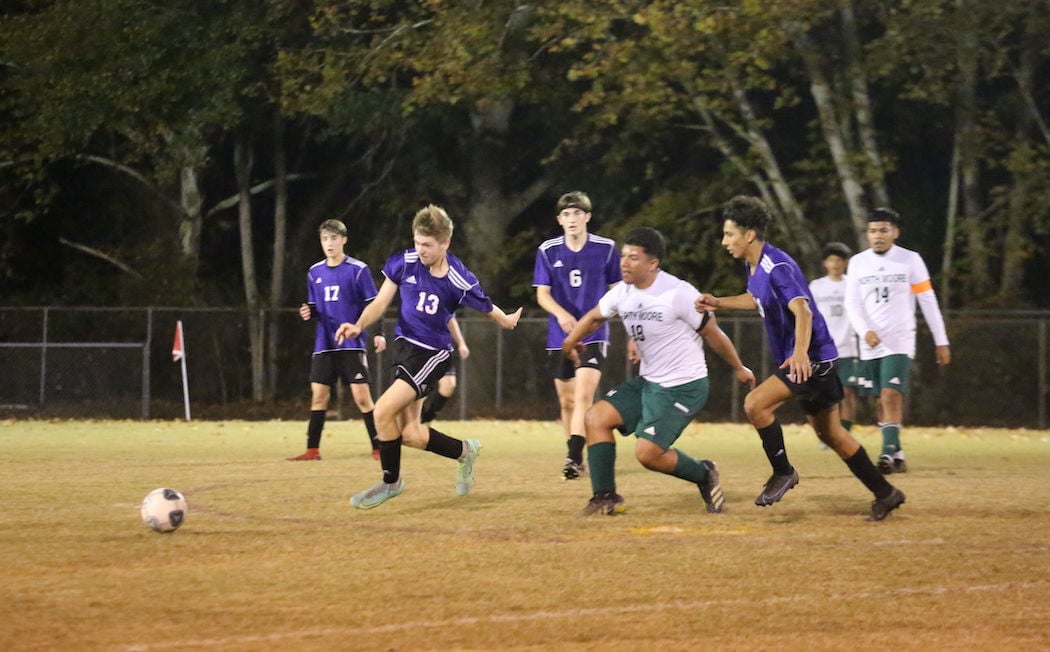 Rosewood forward Reece Gery escapes from a defender after getting his jersey pulled.

Rosewood’s Aaron Zamora celebrates with his teammates after scoring the game winning goal against North Moore.

Rosewood forward Reece Gery escapes from a defender after getting his jersey pulled.

The number two ranked Rosewood Eagles (21-0-2) defeated the number three ranked North Moore Mustangs (10-6-2) by a score of 1-0 in the North Carolina High School Athletic Association 1A state playoff quarterfinals with a goal in the 103rd minute of the match.

With the 1-0 victory, Rosewood reached the semifinals for the first time in the history of the soccer program.

North Moore started off started off Thursday night’s match as the more aggressive team on offense, and they showed more energy early on than the Eagles, even after the more than two-hour bus ride from Robbins.

Their early pressure paid off when in the 22nd minute a Rosewood defender made an illegal tackle on a North Moore forward which gave the Mustangs a penalty kick. Brian Loza was the chosen penalty kick taker for the Mustangs, and he put too much power behind the kick and it sailed way over the bar to keep the match at 0-0.

After giving up the penalty kick, Rosewood began to assert themselves more on the offensive side of the ball. The newfound aggression by the Eagles led to them earning a free kick just outside of the box. After the call, Rosewood fans erupted in the stands yelling to the ref their belief that it should have been a penalty kick.

Rosewood forward Reece Gery stepped up to take the free kick, and instead of going for a shot, he decided to cross the ball to an attacker. His pass wasn’t placed well enough though, and the cross didn’t result in a goal.

In the 67th minute North Moore had another chance to score after winning a corner kick. On the corner one of the Mustangs midfielders crossed the ball into the penalty box where Mustangs forward Tristan Aviles got his head on the ball. The header was powerful, but the ball hit off the crossbar and bounced back into the field of play.

In the final minutes of regulation neither team was able to score, and the match headed to extra time with the score at 0-0.

Extra time in the NCHSSA playoffs consists of two 10-minute halves where the full 20 minutes must be played out regardless of whether there is a score or not.

The best chance of the extra time period came in the 93rd minute when Gery dribbled down the left sideline, and crossed the ball to midfielder Zach Gordan. Gordan was not able to connect on the cross though, and the match remained scoreless.

With neither team scoring in the first two extra time periods, two more five-minute periods know as golden goal periods would be played, and this time any score would win the match.

Just two minutes into the overtime period, Gery took a shot on goal from way outside of the penalty box area. The goalkeeper made a dividing save, but it resulted in a corner kick. Gery also took the corner kick, and he crossed it in low and right to a Rosewood attacker who kicked it toward the goal. The North Moore goalkeeper saved the shot, but landed back into play and Aaron Zamora was there to tap it in for the win.

After the goal, Zamora took off running, and all of his teammates chased him and tackled him to the ground in celebration.

Zamora said that he wasn’t thinking on the match winning goal. He just saw the ball and reacted.

“I saw the ball get loose, and I kicked it in,” Zamora said. “It’s crazy that me, my brothers, and my family won at the last second. It’s just surreal.”

Rosewood head coach Eddie Maldonado said that going into the season his players set a goal to make it further than they had even been before.

“It’s really exciting. Going into the season and bringing all the guys back except for two guys, I knew that we had a possibility to do something,” Maldonado said. “Their goal was to make it further than where they made it last year, and they did that, so I can’t be prouder of them.”

Rosewood will face the number one ranked Voyager Academy (16-1-3) in Durham at 6 p.m. on Tuesday in the NCHSSA state playoff semifinals.