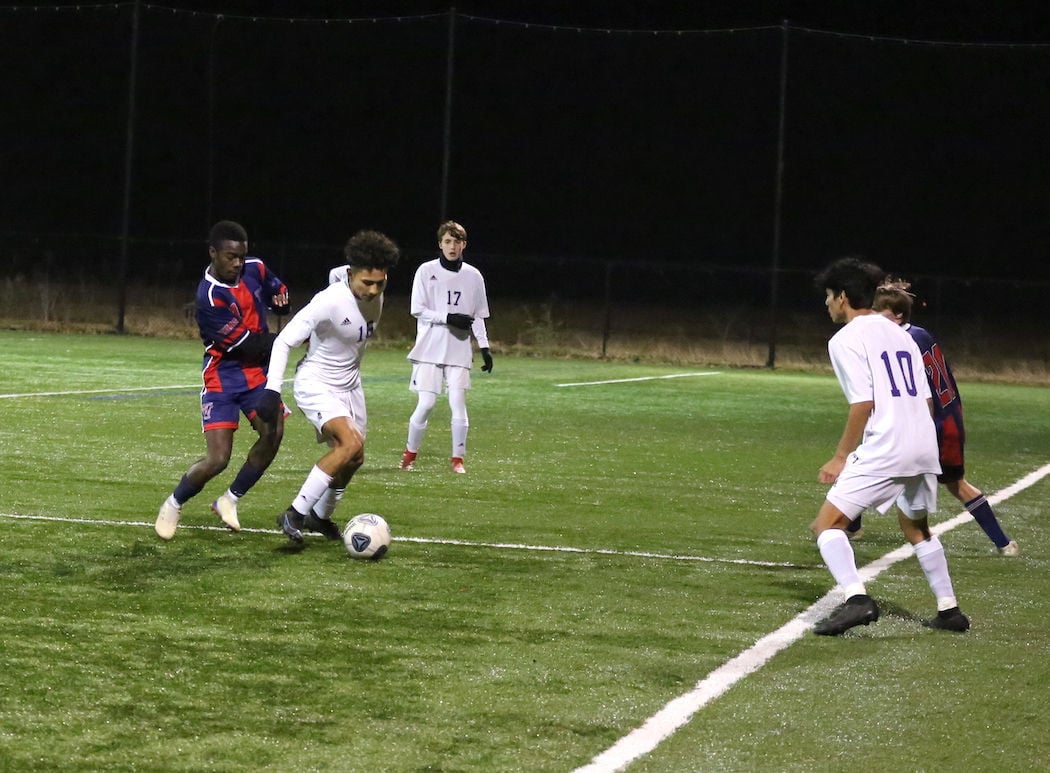 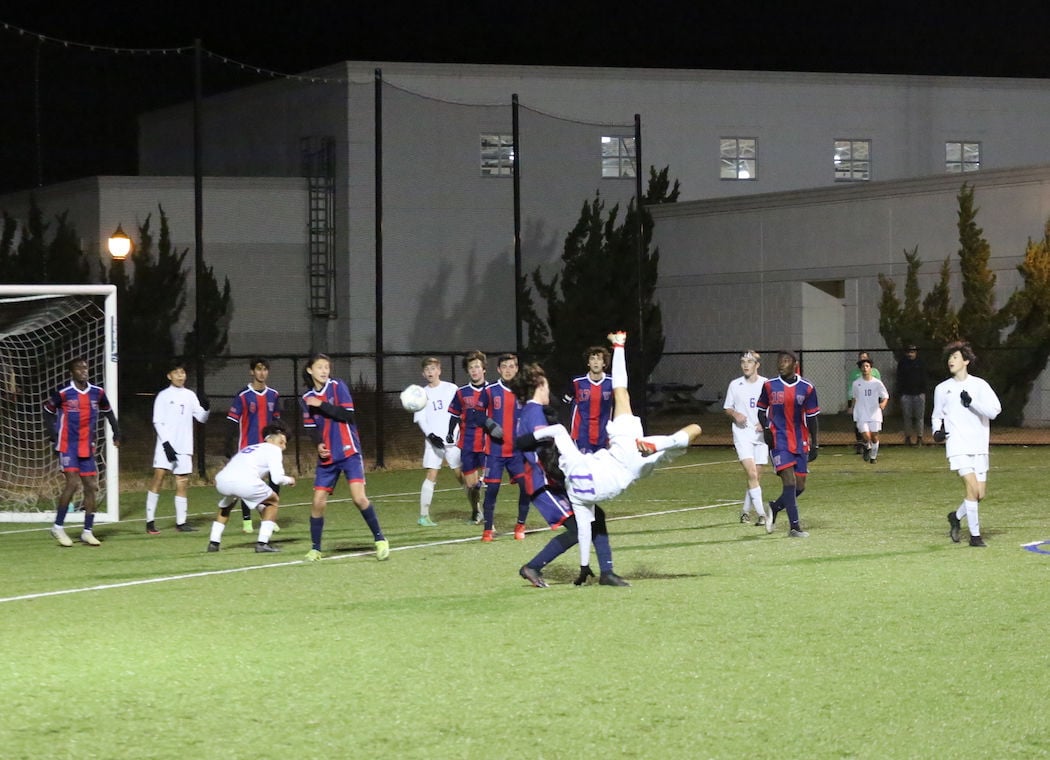 Rosewood midfielder Hector Gutierrez connects with the ball on a bicycle kick in Tuesday night’s match. 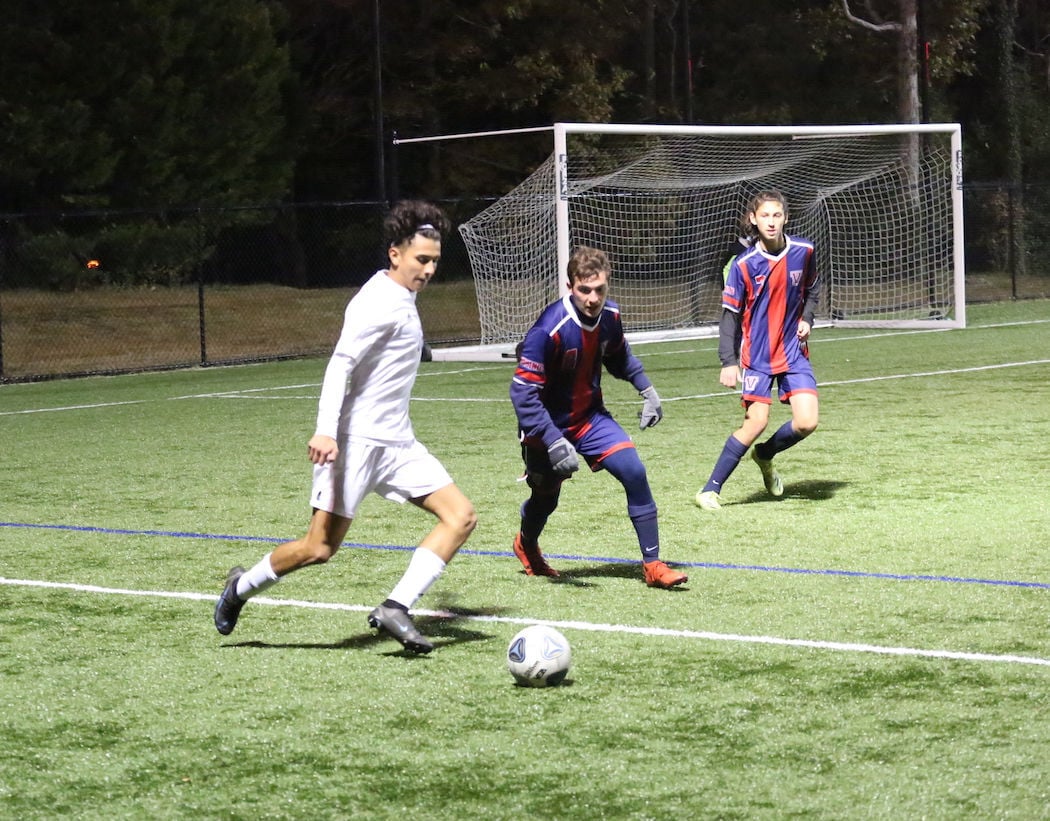 Rosewood’s Aaron Zamora tries to complete a pass against the Voyager Academy defense.

Rosewood midfielder Hector Gutierrez connects with the ball on a bicycle kick in Tuesday night’s match.

Rosewood’s Aaron Zamora tries to complete a pass against the Voyager Academy defense.

DURHAM — The Voyager Academy Vikings defeated the Rosewood Eagles 1-0 in the North Carolina High School Athletic Association 1A state playoff semifinals with a goal in the 72nd minute following a controversial penalty call.

The first scoring opportunity in Tuesday night’s match came from Rosewood when forward Hector Gutierrez broke free of the Vikings defenders and took a shot on goal in just the 11th minute of the match. The shot from Gutierrez hit off the right post, and went out of bounds to end the attacking chance.

After the early chance by Rosewood, neither team was able to control the ball for a long period of time or create any significant chances for most of the first half. Both teams stayed in a tight defense formation, and prevented the other team from pushing the ball up the field.

In the second half, it was Voyager who created the first scoring opportunity. In the 44th minute a Voyager attacker dribbled through the Eagles defense to get a one-on-one chance in the penalty box with just one defender to beat.

The Rosewood defender did a good job of creating an awkward shooting angle for the attacker though, and the Voyager Academy forward was unable to get off a good shot.

Just six minutes later, the Rosewood defenders stopped another attack that could have turned into a goal by staying in formation to once again force the Vikings attacker to take an awkward shooting angle. They were then able to take control of the ball and clear it out of play.

Coach Eddie Maldonado said he was proud of the way his defense performed but he wished his team’s offense could have created more scoring chances early on in the match.

“We knew that we were going to be defending a lot tonight,” Maldonado said. “At halftime we talked about playing on our heels too much. I felt like the last 20 minutes or so we started to come out of our shell.”

The best goal scoring chance of the night for Rosewood came in the 62nd minute from a corner kick. The corner kick was crossed high in the air to Gutierrez, who went flying in the air feet first with his head almost touching the ground as he attempted the bicycle kick. His kick was on target, but the goalkeeper was able to grab the ball in the air and make the save.

The only goal of the night came in the 72nd minute on a penalty kick that was called against Rosewood goalkeeper Ben Peacock. Peacock came out of the box to collect the ball, and bumped into one of the Voyager attackers when trying to play the ball. The referee then blew his whistle and pointed to the penalty spot. The players for Rosewood looked dismayed, and many of them were confused about why the penalty had been given.

Voyager’s Emory Crichlow, who is the Vikings’ second leading scorer this season with 18 goals, stepped up to take the penalty kick following the call. Peacock guessed the right way, but Crichlow’s shot was too good and hit the back of the net to give the Vikings a 1-0 lead.

Maldonado said after the match that he believed a penalty should not have been given, especially with only eight minutes remaining in regulation.

“From my perspective no (penalty). For him to call that, it had to be a pure, clear and decisive penalty, and I don’t know, maybe it was,” Maldonado said.

“It just sucks to lose on something like that because you always look at it and say that, well, the referee is making the decision in the match and not the boys.”

After the penalty, Rosewood pushed farther up the field and began to cross the ball into the penalty box in an attempt to score an equalizing goal. They were unable to find the equalizer though, and the match ended 1-0 in Voyager Academy’s favor.

Maldonado said that he has been amazed by his players’ attitudes throughout the season. He said he could count on them to keep fighting no matter the score.

Tuesday night’s loss was Rosewood’s only loss of the season, and the Eagles finished with an overall record of 21-1-2.