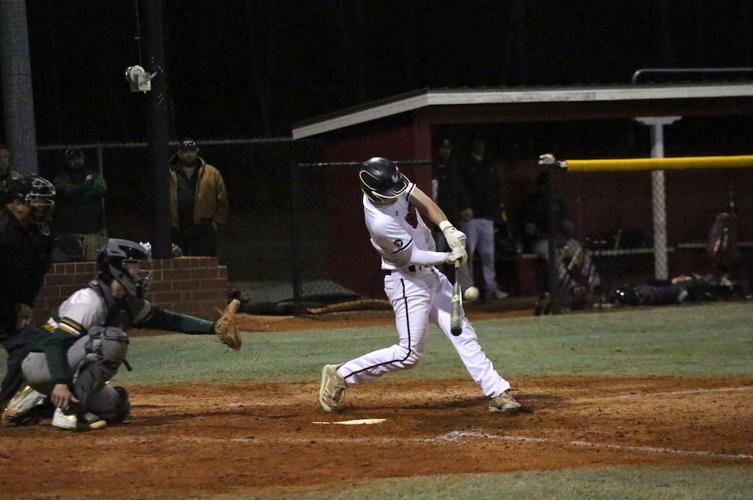 Above left: Southern Wayne batter Alex Ferrell makes contact with the ball in Tuesday night’s game against Northern Nash. Above right: Southern Wayne hurler Will Pennington prepares to follow through on a pitch. 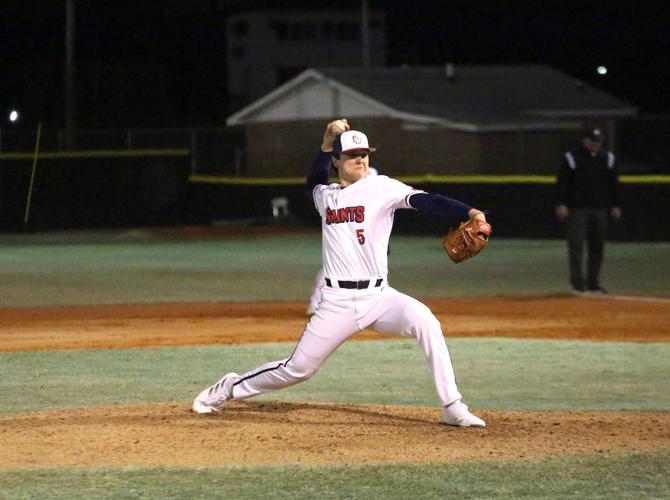 Above left: Southern Wayne batter Alex Ferrell makes contact with the ball in Tuesday night’s game against Northern Nash. Above right: Southern Wayne hurler Will Pennington prepares to follow through on a pitch.

The Southern Wayne Saints defeated the Northern Nash Knights 6-1 on Tuesday night in the opening game of the season.

Will Pennington started the game on the mound for the Saints and he made quick work of the Knights in the top of the first and second innings, allowing just one hit in the second inning.

In the bottom of the second, Southern Wayne was able to capitalize on their strong pitching and defense by scoring two runs to take a 2-0 lead.

The first run came when outfielder Nolan Joyner, who was walked with the bases loaded, provided Alex Davis with a free pass from third base to home plate, which gave the Saints a 1-0 lead.

The next run came from Drew Sweet who scored from first thanks to a sacrifice RBI into shallow left field from Richard Noble, which he was thrown out on. The RBI from Noble gave the Saints a 2-0 lead with two outs in the inning.

The final out of the inning occurred after the Northern Nash catcher had trouble locating a wild pitch that went by him. Nathan Joyner who was at second tried to take advantage of the play by attempting to steal home from second base. Joyner was able to steal third with ease, but the Knight’s catcher was able to locate the ball before he could get to home plate, and he was tagged out.

In the top of the fourth, the Saints surrendered their first and only run of the game. The run was scored with two outs when the Northern Nash batter swung and missed on a pitch by Pennington. The catcher was unable to recover the pitch that went into the dirt, and the runner from third base scored and the batter made it safely to first base.

Pennington was able to strikeout the next batter with runners on first and third to end the top of the inning with the Saints still on top 3-1.

In the bottom of the fifth inning, the Saints extended their lead with an RBI single from Sweet that scored Pennington from third.

In the top of the sixth inning with batters on first and second base for the Knights, Pennington was able to force an easy groundball for the shortstop that would have been the third out.

The Saints shortstop couldn’t pick up the groundball and with Pennington at a high pitch count, Southern Wayne head coach Trae McKee signaled for Pennington to come off the mound. Alex Davis came in as his replacement, and he immediately forced a groundout from the first batter he faced to end the inning.

Pennington said he was thankful Davis was able to get the team out of the bases loaded jam.

“He was big tonight,” Pennington said. “With the bases loaded, he came in and got a good groundball (to end the inning).”

The Knights were unable to create a similar chance to tie the game, and the Saints extended their lead even further to win 6-1.

McKee said that he was very happy with the way Pennington and the rest of the Saints played in their opening game.

“I thought we executed when we needed to execute and that helped us build on a little bit of a lead,” McKee said. “I thought Will did a great job on the mound.”

Southern Wayne will play again on Friday night at home against Eastern Wayne at 6 p.m.