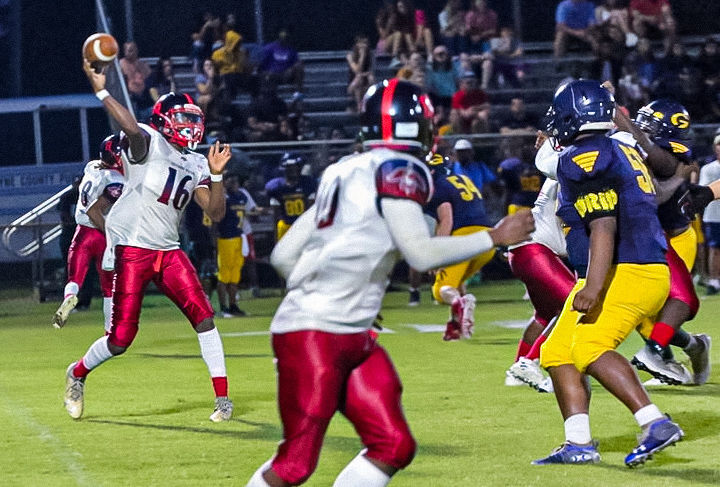 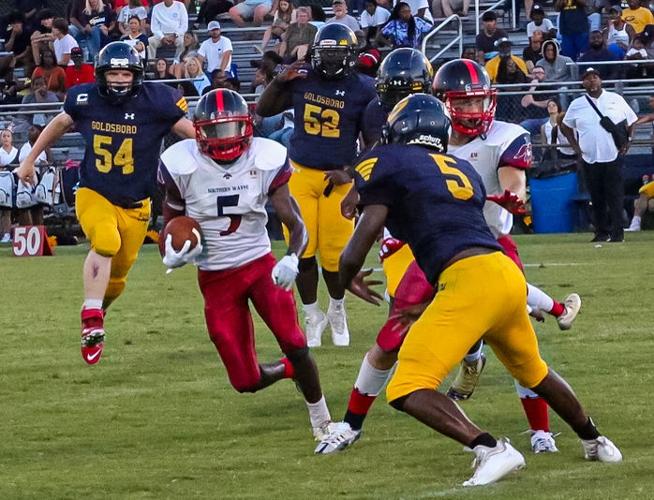 Southern Wayne running back Jacarious Marshburn picks up a block as he tries to get a first down for the Saints during Friday night’s football game against Goldsboro. 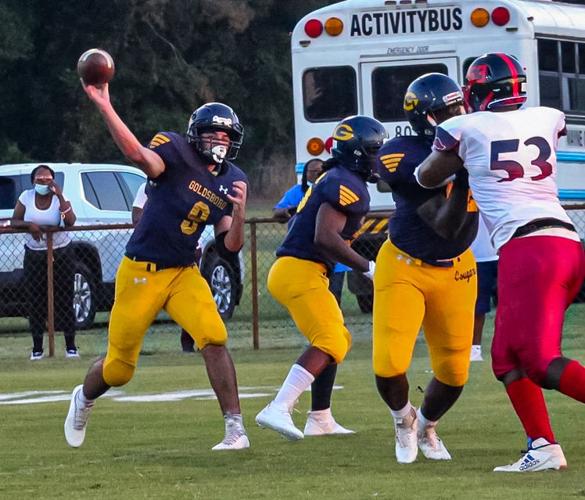 Southern Wayne running back Jacarious Marshburn picks up a block as he tries to get a first down for the Saints during Friday night’s football game against Goldsboro.

DUDLEY — The Southern Wayne Saints defeated the Goldsboro Cougars on Friday night in a game where the Saints came alive in the second half after failing to score in the first half.

The first half of Friday Night’s game was filled with punts, incompletions and turnovers as both teams failed to score a single point in the first half.

The best chance for either team to score in the first half came from the Saints. Midway through the second quarter, Southern Wayne drove down the field to the Cougars’ three-yard line.

On third and goal, quarterback Jamere Bannerman, who started the game in place of the injured Josh Kearney, pitched the ball to running back Jaylan Council.

Council tried to take the ball in for a touchdown, but he fumbled at the one-yard line, and Goldsboro recovered the ball.

After taking over a yard away from their end zone, the Cougars did all they could to avoid a safety, and after three plays, the Cougars punted the ball away.

The long stalemate lasted until the third quarter when Southern Wayne finally scored the game’s first points with a 35-yard touchdown pass from Bannerman to receiver Dylan Kornegay.

The Saints missed the extra point, but the touchdown catch from Kornegay gave the Saints a 6-0 lead with 5:43 left in the third quarter.

In the fourth quarter, Southern Wayne extended its lead when running back Jacarious Marshburn scored from 13 yards out to give the Saints a 12-0 lead.

A few plays later, Southern Wayne got the ball back when corner Donavon Armwood intercepted a Goldsboro pass and returned it to the Goldsboro 30-yard line.

Armwood, who came in at quarterback for an injured Bannerman, finished off the drive he set up by taking off and running for a 19-yard touchdown.

In the end, the Saints came out victorious as the Southern Wayne defense made one more stop to seal the shutout win.

After dropping five straight games to Goldsboro, the Saints have now won two games in a row against their rival.

Frank Coston earned his first win as the Southern Wayne head coach, and he said it felt amazing to win his first game as a head coach, but he was more excited for his players.

Coston said he was also proud of third string quarterback Armwood, who came in with little experience at the position and scored a touchdown.

“He doesn’t get a whole lot of reps, and I was hoping we wouldn’t have to play him this week, but man, that kid is a gamer,” Coston said. He told me he only knew three plays, and I called two plays the whole time he was in the game.”