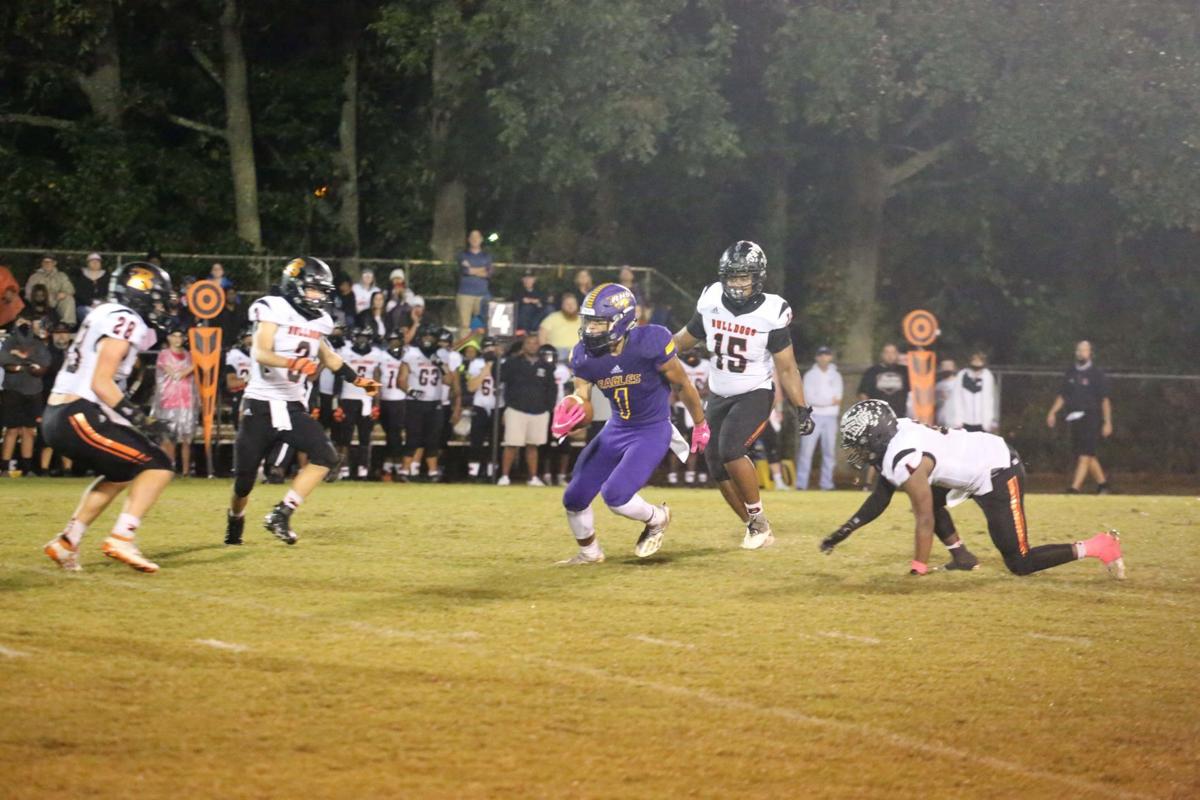 Rosewood receiver John Thompson finds open space as he picks up a first down. 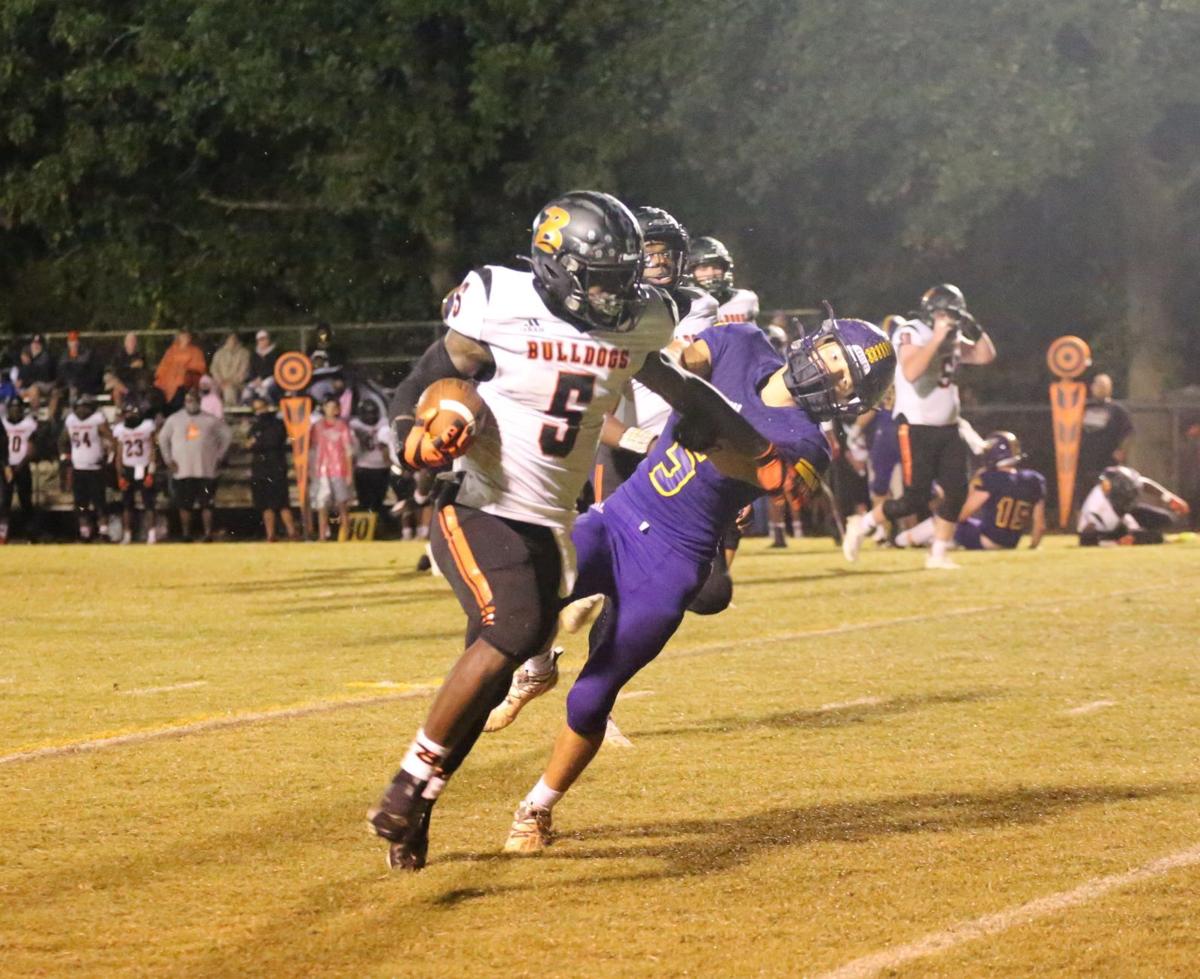 Wallace Rose-Hill running back Kanye Roberts stiff-arms the Rosewood defender before he scores a touchdown. 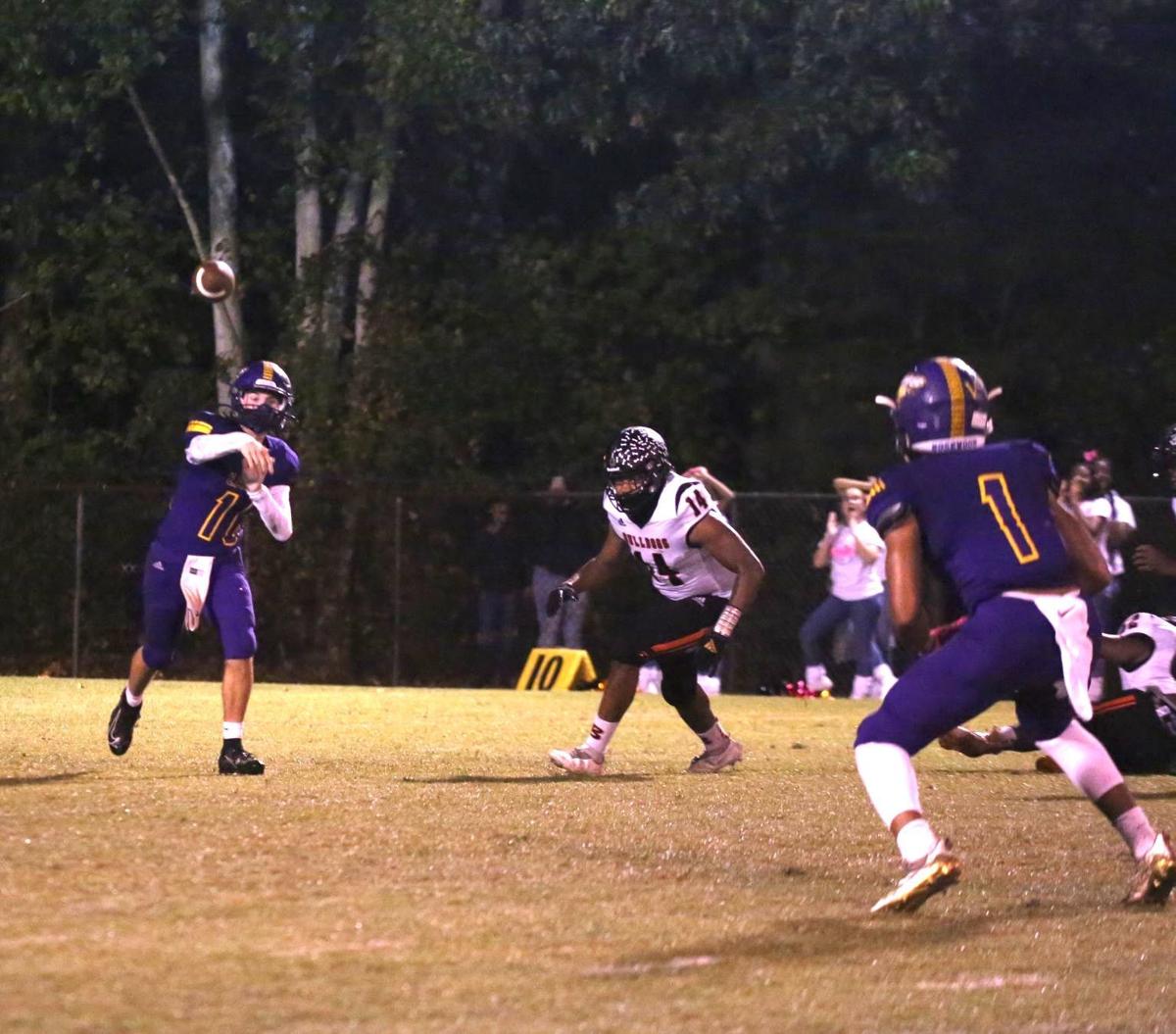 Rosewood receiver John Thompson finds open space as he picks up a first down.

Wallace Rose-Hill running back Kanye Roberts stiff-arms the Rosewood defender before he scores a touchdown.

The Wallace-Rose Hill Bulldogs defeated the Rosewood Eagles, 63-27, in one a one-sided victory on Thursday night.

It took Wallace-Rose Hill less than two minutes to score first in Thursday night’s game. The score came from running back Kaymond Farrior who scored a rushing touchdown with 10:16 remaining in the first quarter to give the Bulldogs a 7-0 lead.

After the touchdown on the opening drive, the Eagles took over on offense following the kickoff. The offensive drive failed to get going though, and Rosewood was forced to punt after just three plays.

On the punt attempt, the center hiked the ball over punter Ben Peacock’s head, and the football rolled into the end zone. Peacock picked up the ball in his end zone and instead of taking a safety decided to run the ball out of the end zone where he was tackled at the 1-yard line.

The Bulldogs were easily able to punch it in from the 1-yard line with a rushing touchdown from Kanye Roberts to take a 14-0 lead with 8:30 remaining in the first quarter.

Following the rushing touchdown from Roberts, Wallace-Rose Hill kicked the ball off and for the Eagles it was Micah Cox who returned the ball on the kickoff. On one of the longest plays of the game, Cox outran all of the Bulldogs defenders to return the ball for a touchdown and make the score 14-7.

Rosewood’s momentum swing did not last long though and Bulldogs running back Robert scored two more times in the quarter on back-to-back drives to give Wallace-Rose Hill a 28-7 lead at the end of the first quarter.

Instant analysis: Packers QB Aaron Rodgers proves he does 'still own' the Bears

The Wallace Rose-Hill running back would have his way throughout the rest of the first half and in the second quarter, Roberts scored another rushing touchdown to put his total at four for the half. At halftime with two rushing touchdowns from Farrior and four from Roberts, Wallace-Rose Hill led 42-20.

In the second half of the game, Wallace-Rose Hill continued to dominate on offense with Roberts leading the attack. The Bulldogs running back went on to score two rushing touchdowns in the second half to put his total at six for the game.

The Bulldogs also did a good job of stopping the Eagles offensive attack in the second half where they only allowed them to score seven points. When the game ended, Wallace-Rose Hill came out on top 63-27.

Rosewood head coach Robert Britt said that he thought his team played well overall and that they were simply outmatched by the talent of Wallace-Rose Hill.

“I think you give all the credit to (Wallace-Rose Hill),” Britt said. “They are a very good team. They play with unbelievable speed. There is no way we can practice the type of speed we are going to see (from them). It might be a while before we see a team of that caliber again.”

With the loss, Rosewood falls to 3-2 overall this season, but still remains 1-0 in the Carolina 1A Conference. Wallace-Rose Hill improved to 6-1 overall with the win.

Rosewood will take on North Duplin next at home on Oct. 22 at 7 p.m.