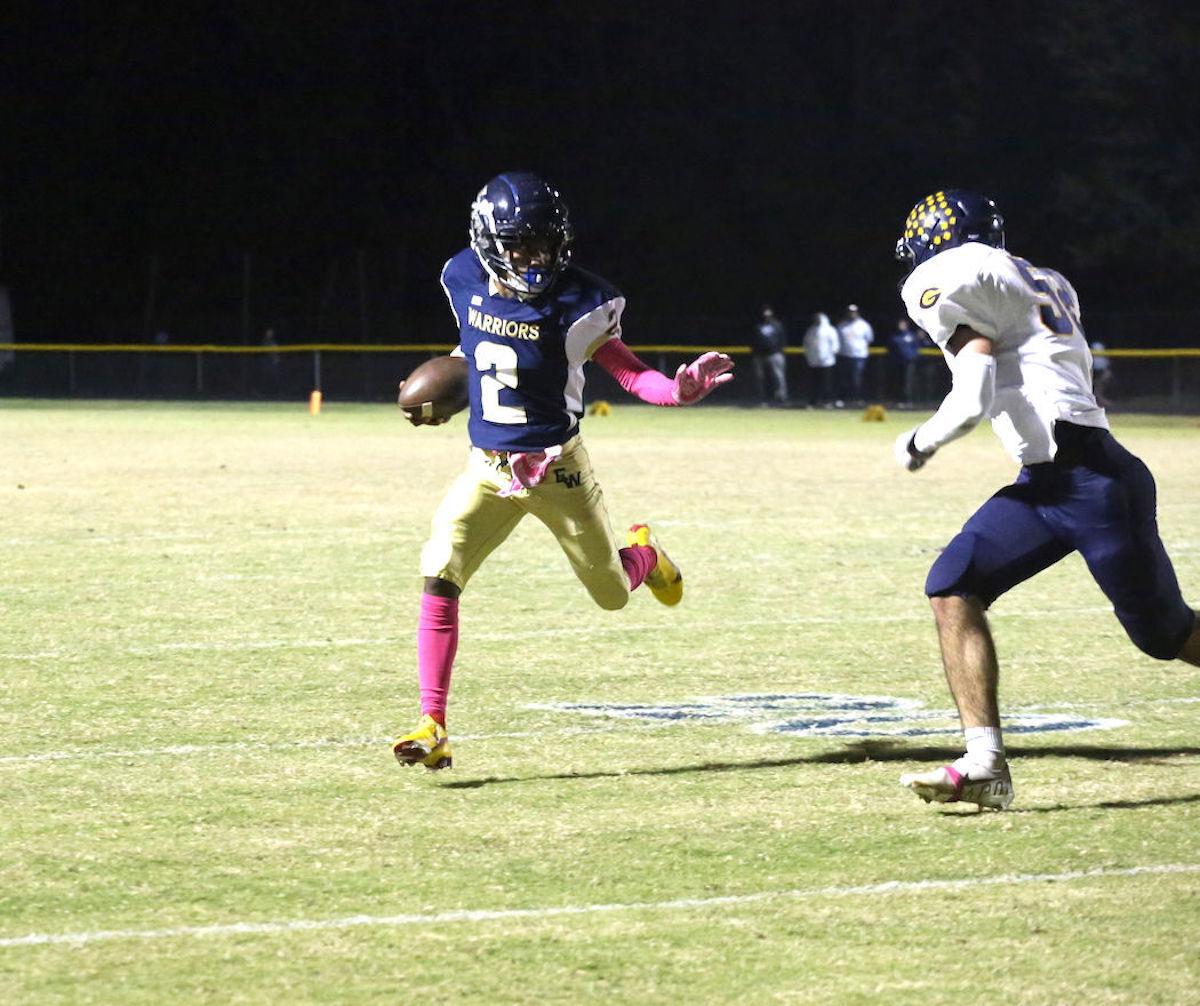 Eastern Wayne quarterback C.J. Battle creates separation with the Goldsboro defender as he tries to pick up a first down. 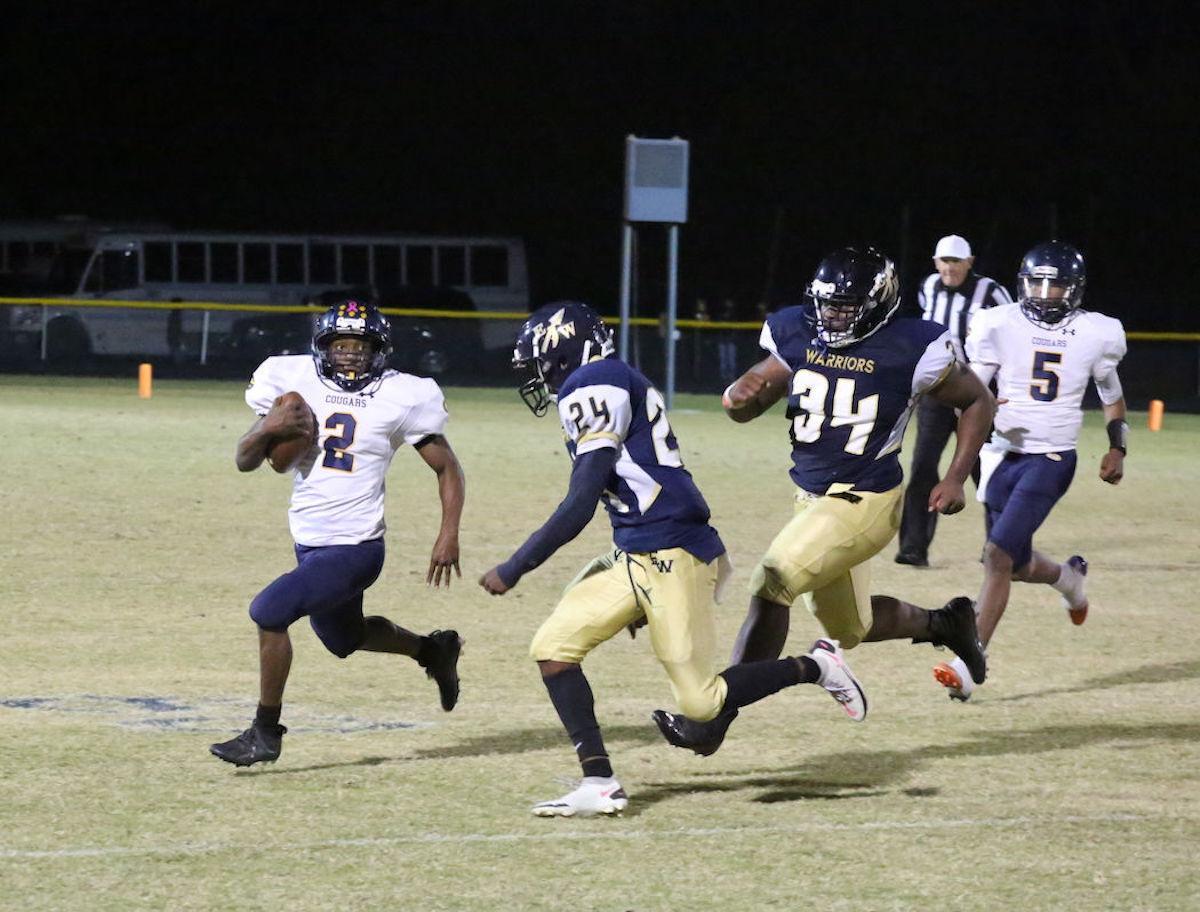 Goldsboro running back Tyili Faison looks to pick up a first down against Eastern Wayne. 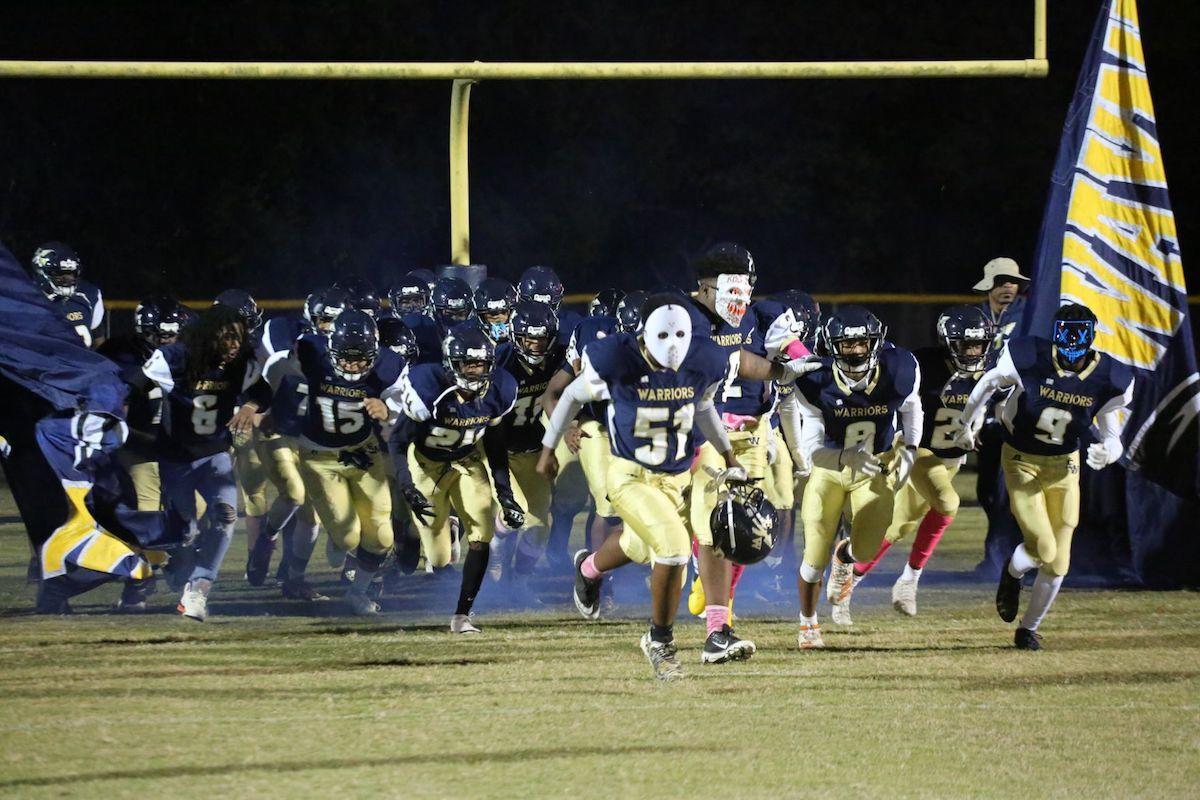 Eastern Wayne rushes onto the field for their final game of the regular season.

Eastern Wayne quarterback C.J. Battle creates separation with the Goldsboro defender as he tries to pick up a first down.

Goldsboro running back Tyili Faison looks to pick up a first down against Eastern Wayne.

Eastern Wayne rushes onto the field for their final game of the regular season.

The Eastern Wayne Warriors defeated the Goldsboro Cougars 28-14 on Friday night in the final game of the regular season.

Eastern Wayne scored first on the opening kickoff to take a 7-0 lead less than 20 seconds into the game. The touchdown was scored by Zavian Oates, who outran everyone to score the 70-yard touchdown.

The Warriors scored again with 5:18 remaining in the first quarter with a 3-yard rushing touchdown from Zion Rodgers on second and goal. The touchdown run was set up by Oates, who returned a punt to the Goldsboro 18-yard line.

On the next Warriors possession on fourth down and five, Eastern Wayne decided to go for it at their own 24-yard line. Quarterback C.J. Battle tried to complete a pass down the right sideline to his receiver on the play, but he overthrew him, which resulted in an incompletion and a turnover on downs.

Eastern Wayne head coach Leander Oates said that going for it on fourth down was risky, but he trusts his players to make plays.

“I’m a daredevil,” Oates said. “I put my team in a (dangerous) situation when I went for it on that fourth down play, but I trust my defense. Unfortunately, we did give up the points, but we rebounded after that.”

Less than a minute after the turnover on downs, Goldsboro used their short field possession to run the ball in for a rushing touchdown. Running back Justin Taylor was the player who scored the touchdown on a 13-yard run, which cut the lead to 14-6.

The Warriors scored again on their next drive with a 5-yard touchdown run from Demontae Robinson. The score from Robinson gave Eastern Wayne a 28-6 lead heading into halftime.

The second half was much more defensive than the first half, and both teams struggled to score. The only score of the half came from Goldsboro’s Justin Taylor who scored a 7-yard rushing touchdown in the third quarter. Taylor’s second rushing touchdown of the game wasn’t enough to get the Goldsboro offense going though, and the Warriors held on to win 28-14.

Oates said he was happy with the way his team played throughout the game.

“I’m very proud. It was great atmosphere tonight, and I wanted to show something tonight,” Oates said. “I knew they were going to come in and play a great game, which is the expectation. Our guys played hard, we knew what was at stake, and we wanted to make sure we position ourselves for the playoffs.”

With the win, the Warriors finish the regular season with an 8-2 record, which is their best regular season record since 2014 when they also went 8-2. Eastern Wayne finished second in the Neuse Six 2A conference with a 4-1 record in conference play, and qualified for the N.C. High School Athletic Association 2A State playoffs.

Goldsboro finished the regular season with an overall record of 4-6, and a conference record of 3-2. The Cougars finished in third place in the Neuse Six Conference, and also qualified for the N.C. High School Athletic Association’s 2A state playoffs.

Eastern Wayne will take on Kinston (7-3) in the opening round of the state playoffs at home on Friday at 7 p.m.

Goldsboro will travel to St. Pauls to take on the St. Pauls Bulldogs (8-0) on Friday at 7:30 p.m. in the opening round of the state playoffs.