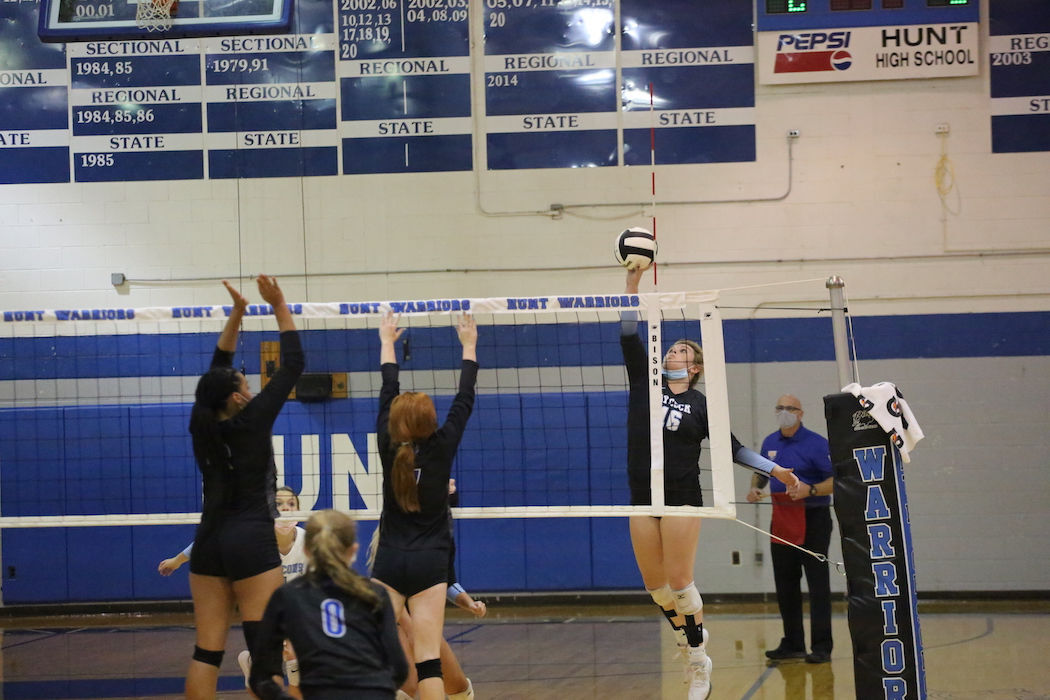 Charles B. Aycock’s Laci Best spikes the ball as she tries to earn a kill against Hunt. 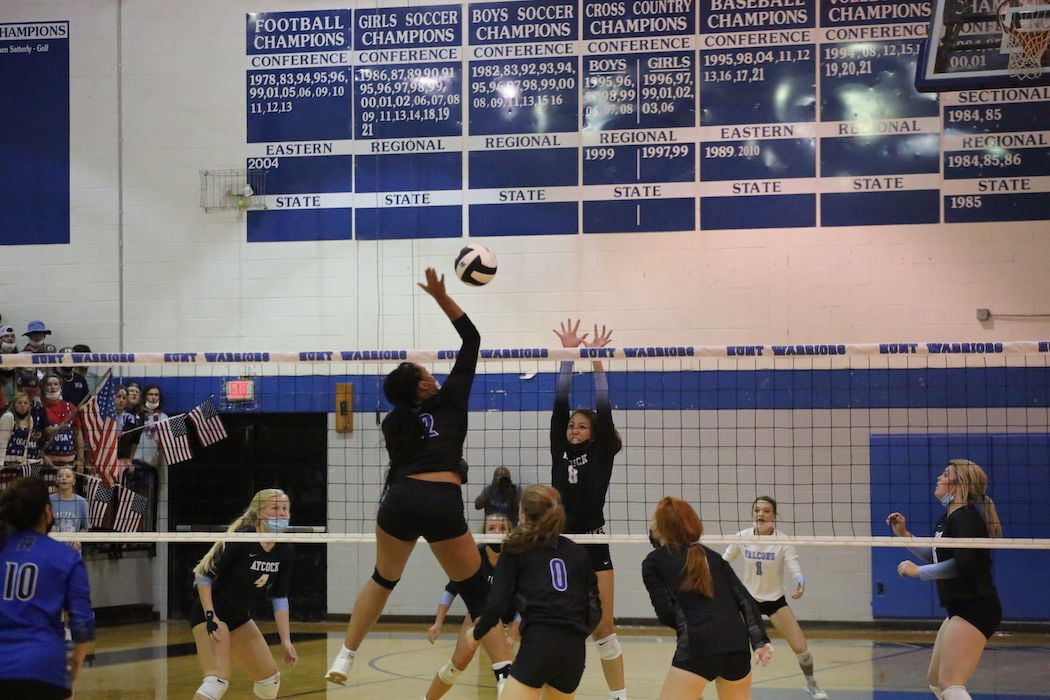 Charles B. Aycock’s Alora Stanton reaches up as she tries to block a spike from the Hunt net player.

Charles B. Aycock’s Laci Best spikes the ball as she tries to earn a kill against Hunt.

Charles B. Aycock’s Alora Stanton reaches up as she tries to block a spike from the Hunt net player.

WILSON — The Hunt Warriors defeated the Charles B. Aycock Golden Falcons three sets to zero in the Quad County 3A Conference Tournament Championship on Wednesday night.

Heading into Wednesday night’s game, both teams continued their incredible form that they had throughout the regular season with both teams sweeping their quarterfinal opponents and only dropping a single set to their semi-final opponents.

At the start of the match, the Golden Falcons jumped ahead of the number one ranked Warriors 7-3 with some great net play from team kill leader Laci Best. Hunt quickly rallied back and evened up the game at 9-9. Just three plays later with the score at 11-10 in Hunt’s favor, an alarm went off in the Hunt High School gymnasium, which stopped the game for a couple of minutes.

The stoppage of play seemed to affect the Golden Falcons the most, and when play resumed they lost five straight points to fall behind 16-10. C.B. Aycock was never able to regain the lead, and Hunt won the first set 25-18.

After winning the first set, Hunt continued to dominate at the beginning of the second set. The Warriors took an early 5-1 lead and never once lost the lead for the rest of the entire set. Hunt took the second set 25-16 to take a two sets to zero lead in the match.

In the beginning of the third set, C.B. Aycock jumped out to an 8-2 lead. Hunt once again battled back and cut the score to just one point at 9-8. Neither team was able to take a sizable lead after the Golden Falcons’ early lead in the set, and with the score at 24-23 the Warriors held match point.

C.B. Aycock continued to battle, and they broke the serve of the Warriors to tie the set at 24-24. In the end, Hunt was able to claim the key points they needed, and they broke back and held serve to win the third set 26-24.

C.B. Aycock head coach Jordyn McGhee said she thinks that the nerves that come from playing in a championship game caused her players not to play at their best.

The Golden Falcons will take on First Flight from Kill Devil Hills at home in the first round of the North Carolina 3A state playoffs on Saturday at 7 p.m.