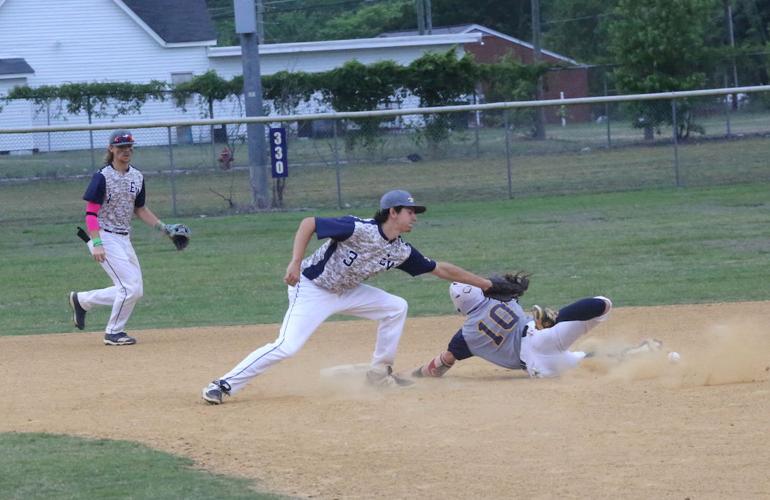 Goldsboro’s Avery Grant slides in safely to second base as Daniel Weeks is unable to locate the ball.

Goldsboro’s Avery Grant slides in safely to second base as Daniel Weeks is unable to locate the ball.

The Eastern Wayne Warriors defeated the Goldsboro Cougars 8-5 on Thursday night to win the Neuse Six 2A Conference tournament.

After going 0-14 last season, the Warriors could not have predicted this season would end with them winning a conference tournament.

With the Warriors joining a new conference and regaining their star pitcher Daniel Weeks, who missed all of last season with a broken leg, the Warriors began to see improvement late in the season.

Heading into the game, the Warriors had won four of its last five games.

The team’s sole loss game April 27 against the Cougars, with a 6-4 score. In the rematch that took place the next day, the Warriors got their revenge by defeating the Cougars 6-5.

The Warriors were up to bat first, and they came out swinging early with back-to-back singles from Jack Rackley and Landon Sutton.

Rackley opened up the scoring on the next ball in play because of a throwing error by Cougar’s shortstop Braxton Morton.

Jacob Daniels came up to bat next for the Warriors, and he drove in two more runs to give the Warriors a 3-0 lead with an RBI double. The last score of the inning came when Daniels crossed home plate off an RBI ground out.

In the second inning after Eastern Wayne began to cool off offensively, the Cougars answered back by scoring four runs to tie the game at 4-4.

The first score for the Cougars came from Avery Grant, who scored off a throwing error by Eastern Wayne shortstop Andrew Crumpler, while the second run came from an RBI single from Morton.

In the top of the third inning, Eastern Wayne failed to score, so Goldsboro had a great opportunity to take the lead with the bases loaded and no outs.

With starting pitcher Lane Hubbard looking tired, the Eastern Wayne coaching staff decided to pull him out of the game and put Weeks on the mound.

The change proved effective as Weeks struck out the first batter he faced. During the next at-bat after a strike by Weeks, Eastern Wayne catcher Landon Sutton noticed the runner at third was taking a big lead at third base.

Sutton smartly threw the ball to Jacob Daniels who tagged the runner out. During the same play, the Goldsboro runner at second base was tagged out by Hubbard, who moved to shortstop during the pitching change to end the inning.

The incredible double play from the Warriors at the end of the third inning seemed to give the Warriors the confidence needed on offense.

Thanks to a two-RBI double by Sutton, Eastern Wayne took a 6-4 lead in the top of the fourth inning.

On the mound, Weeks continued to bring his A-game, while the Warriors’ offense was able to increase its lead in the sixth inning.

The Warriors scored off a wild pitch and an RBI single to take a 8-4 lead in the top of the sixth inning. Goldsboro only scored one more run in the game as Weeks finished out the game strong on the mound.

Eastern Wayne head coach Williams Fields said the excitement of winning the conference tournament after not winning a game last season can not be overstated.

“It’s exhilarating,” Fields said. “I don’t know that I will go to sleep before midnight because I am just absolutely exhilarated.”

Both teams will learn their playoff fates Monday when the N.C. High School Athletic Association releases the baseball playoff brackets.