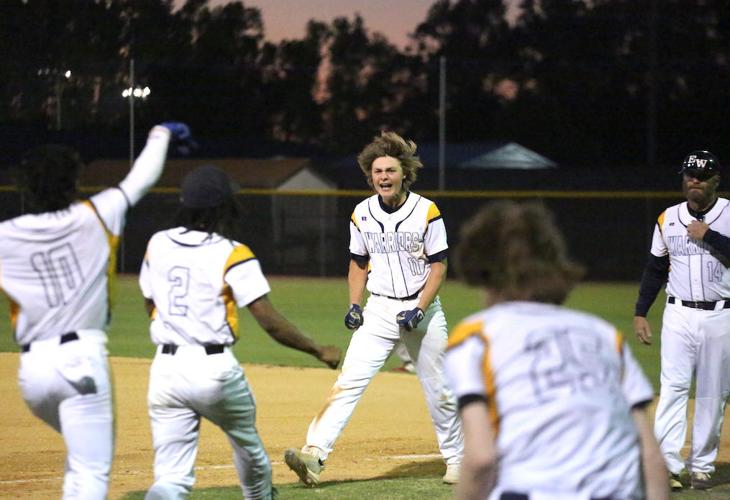 Eastern Wayne’s Jacob Daniels throws off his helmet in celebration after hitting the game-winning RBI single against Goldsboro. 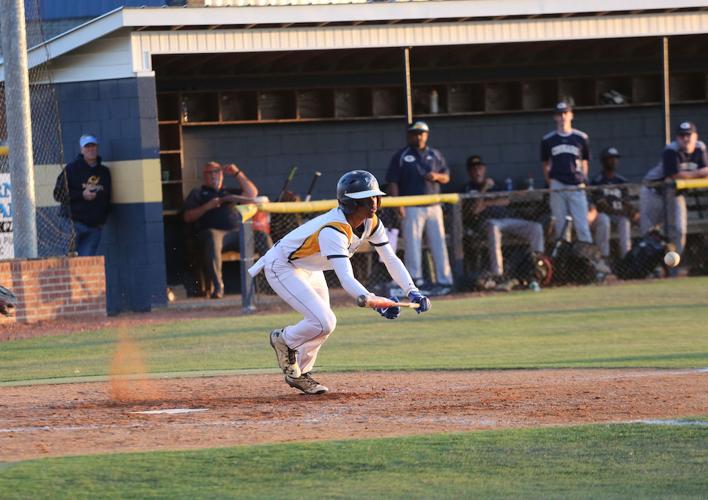 Eastern Wayne’s Jacob Daniels throws off his helmet in celebration after hitting the game-winning RBI single against Goldsboro.

The Eastern Wayne Warriors defeated the Goldsboro Cougars 6-5 on the final play of Thursday night’s game to end the Cougars’ hopes of winning the Neuse Six 2A Conference title.

Thursday’s night game was one of the most important games in Goldsboro baseball history because a victory over Eastern Wayne would give them their first conference title in over 50 years. The Cougars seemed to enter the game with a lot of confidence as they defeated the Warriors 6-4 at home just one day earlier.

Goldsboro started off the scoring in the top of the second inning of the game, which took place at the Eastern Wayne High School baseball field, thanks to an RBI single by Drake Ennis that allowed Avery Grant to come home.

It didn’t take long for the Warriors to answer back, and in the bottom of the second inning they claimed a 2-1 lead with an RBI double by Jayden Drew which scored C.J. Battle and Lane Hubbard.

Thanks to an excellent day on the mound from Hubbard, the Warriors were able to hold the Cougars to one run for most of the game while adding runs in the bottom of the fourth and fifth innings to take a 4-1 lead.

Going into the top of the seventh inning, Hubbard was removed from the game due to reaching his pitch count limit in the game, and was replaced on the mound by Jack Rackley.

In his six innings on the mound, Hubbard allowed only one run and seven hits while earning three strikeouts. Rackley was unable to find the same success as Hubbard and after walking the first two batters he faced, he was taken out of the game and replaced by Jacob Daniels.

On the first batter he faced after replacing Rackley, Daniels forced what should have been an easy groundball for Eastern Wayne second baseman Daniel Weeks. Instead of earning the guaranteed out at first, Weeks tried to force a quick throw to the shortstop at second for double play, which flew over his head allowing Goldsboro’s Evan Cummings to score.

On the next at-bat following the error, Cole McFatter hit an RBI sacrifice fly to score Braxton Morton. Morton’s score made it a 4-3 ballgame with one out and a man on third base for the Cougars.

After walking the next batter, Daniels forced a groundball, which Weeks threw to first that allowed the runner to score but also gave them a second out.

With the game tied 4-4 all Rackley needed was a groundball or pop up to get out of the nightmare inning with the game still tied, and he did just that by forcing Goldsboro’s Savion Edwards to hit into what should have been a groundball. The ball was cleanly fielded by Weeks but the Eastern Wayne first baseman DeAndre Slapper was out of position and unable to get to back to first base in time for the out allowing Dalton Wilkins to score from third and give the Cougars a 5-4 lead.

With a one-run lead heading into the bottom of the seventh, Goldsboro needed just three outs with pitcher Jonah Harrell up on the mound to claim their first conference title in over 50 years. The first batter Harrell faced in the inning was Hubbard who hit a hard liner to right field, which Luke Heathcock was able to catch with a diving grab for the first out.

Jayden Drew was up next and he reached first with a single, and then proceeded to steal second base. The steal by Drew meant that the Warriors had a runner on second base with just one out. The next Eastern Wayne batter, Rackley, however, could not capitalize lining out to Cummings at second base for the second out.

The next batter up, Landon Sutton was walked putting Weeks up to the plate with runners on first and second and two outs. When the Warriors needed him most, Weeks came through for his team by hitting the ball into shallow left field to allow Drew to come home and tie the game at 5-5. Next for the Warriors was Daniels who could win the game, and end the Cougars title hopes with just a single.

Daniels stepped up to the plate and delivered in the biggest moment of the season for Warriors with a groundball in between the first and second baseman that allowed Sutton to score the winning run of the game.

Fields said that he was pleased with team’s overall performance this season where they were able to win seven games as opposed to last year when they didn’t win at all.

“I’m very pleased,” Fields said. “The team battled with some good defensive play from our outfield and infield, and (the season) really did turn out much better than last year.”