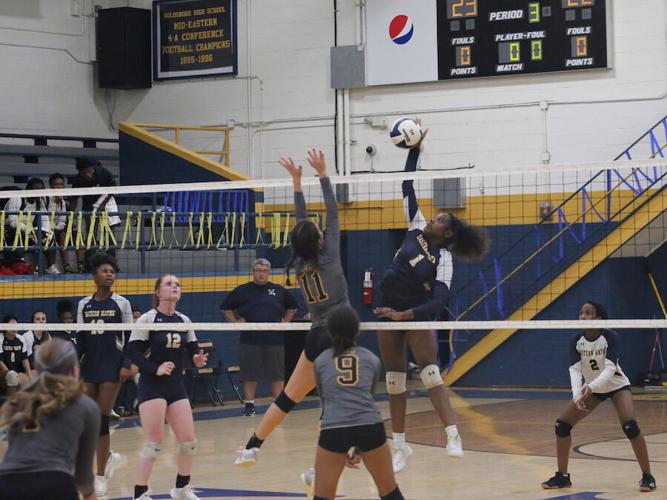 Eastern Wayne’s Ashia Teachey leaps up as she smashes the ball onto the Goldsboro side of the court during Thursday night’s match. 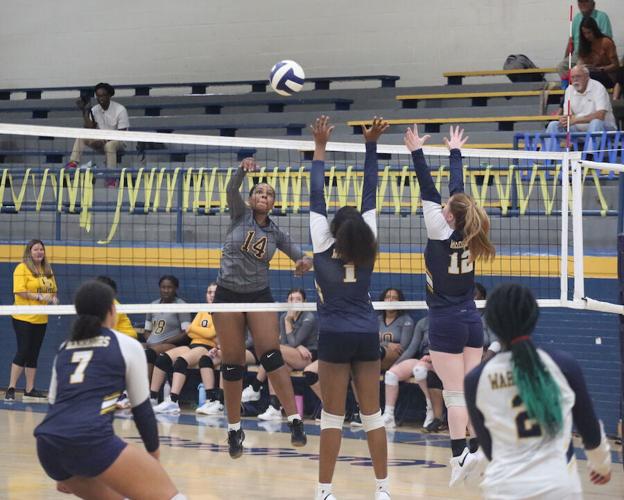 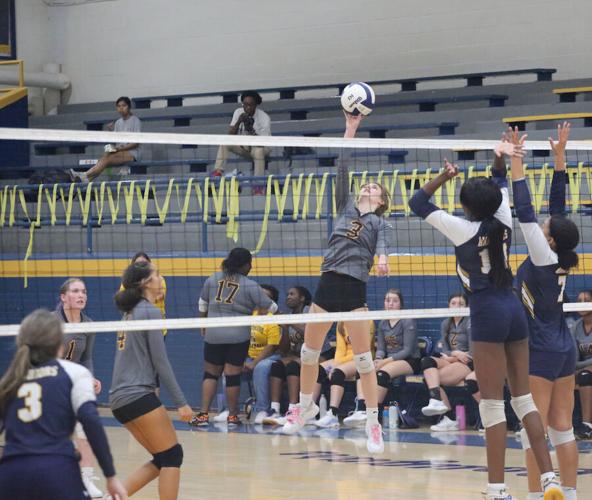 Goldsboro’s Kennedi Howell’s tips the ball over the net during Thursday night’s match against Eastern Wayne.

Eastern Wayne’s Ashia Teachey leaps up as she smashes the ball onto the Goldsboro side of the court during Thursday night’s match.

Goldsboro’s Kennedi Howell’s tips the ball over the net during Thursday night’s match against Eastern Wayne.

The Eastern Wayne Warriors defeated the Goldsboro Cougars three sets to one on Thursday night to claim the regular-season series this season.

Thursday night’s match marked the regular-season finale for both teams, and it also marked the first time the two teams had faced against each other since Sept. 27.

During the Sept. 27 matchup at Eastern Wayne High School, the Warriors won a five-set thriller, so heading into Thursday night’s match, Goldsboro was looking for payback.

The Cougars had a 23-17 lead late in the first set, but they struggled to close out the set, and Eastern Wayne rallied back to tie the set 24-24.

With the set tied, Goldsboro’s Maggie Jones stepped up to the end line with a chance to serve out the match, but the ball went into the net, which gave Eastern Wayne a 25-24 lead.

Needing just one more point to win the set, Natalie Ham stepped up to the end line, and with a well-placed serve, she clinched the set for the Warriors.

The second set proved to be just as exciting as the first, and midway through the second set, the score was tied 18-18.

The Goldsboro players were eager to avoid losing back-to-back sets, and they won four points in a row to pull ahead 22-18. Goldsboro ultimately held on to win the second set 25-22.

Through two sets, players on both sides showed a high level of intensity, and none of the players showed any tiredness in the third set as they continued to play at their highest level.

Rookie of Month Christian Watson on Touchdown vs. Eagles

Midway through the third set, the score was tied at 15-15. It looked as if Goldsboro might pull away when the Cougars won three of the next four points to take a 19-16 lead, but Eastern Wayne battled back and went on a 6-0 run to take a 22-19 lead.

Coming so close to winning but falling short in the first and third sets seemed to be discouraging for the Goldsboro players, and they seemed to lack intensity during the fourth set.

After falling behind 11-6 early on in the fourth set, the Goldsboro players ultimately came up short, as Eastern Wayne increased its lead to 25-15 to take the set and win the match 3-1.

Eastern Wayne head coach Stephen Gross said he was proud of how the Warriors played in their regular-season finale.

With the win, Eastern Wayne finishes the regular season with a 7-7 overall record and a 6-4 record in Neuse Six 2A Conference play.

Goldsboro ends the regular season with a 4-15 overall record and a 3-7 record in conference play.