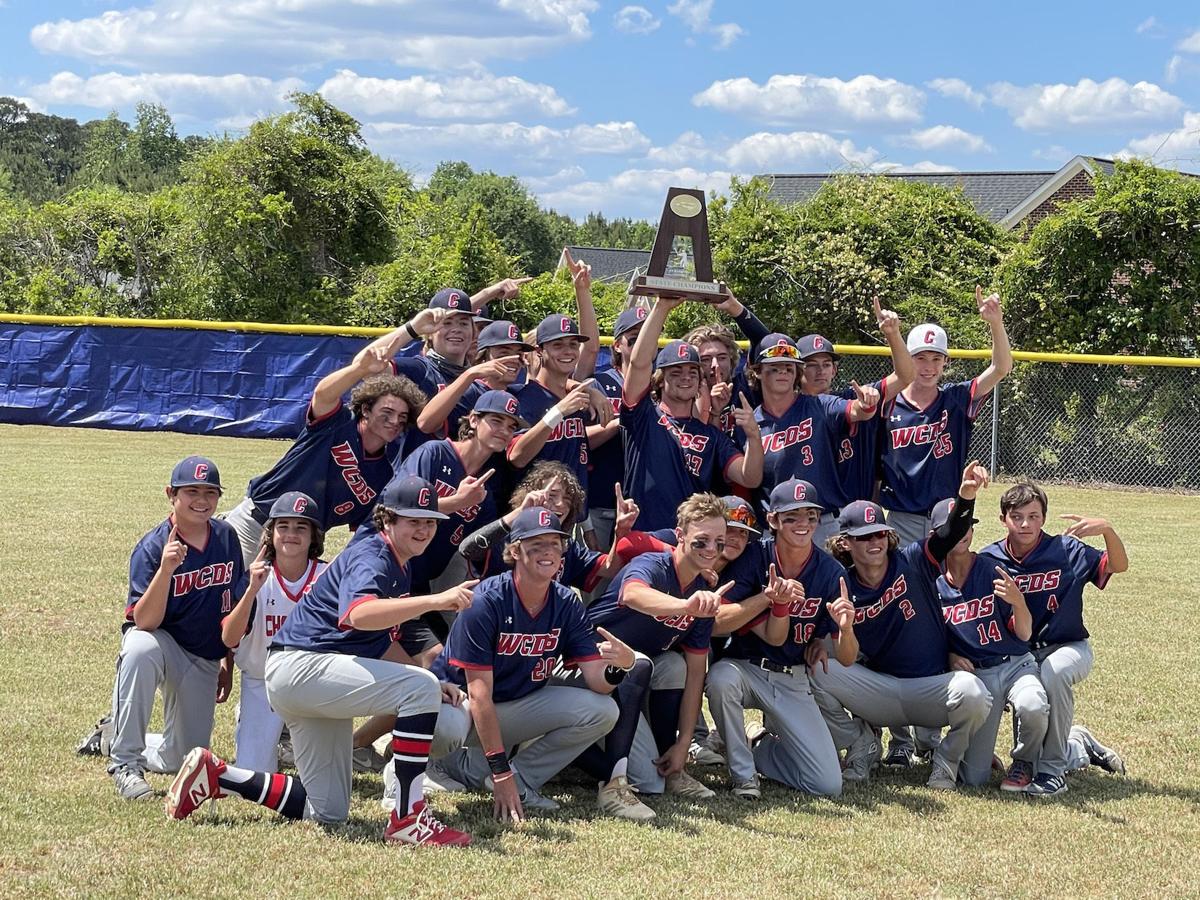 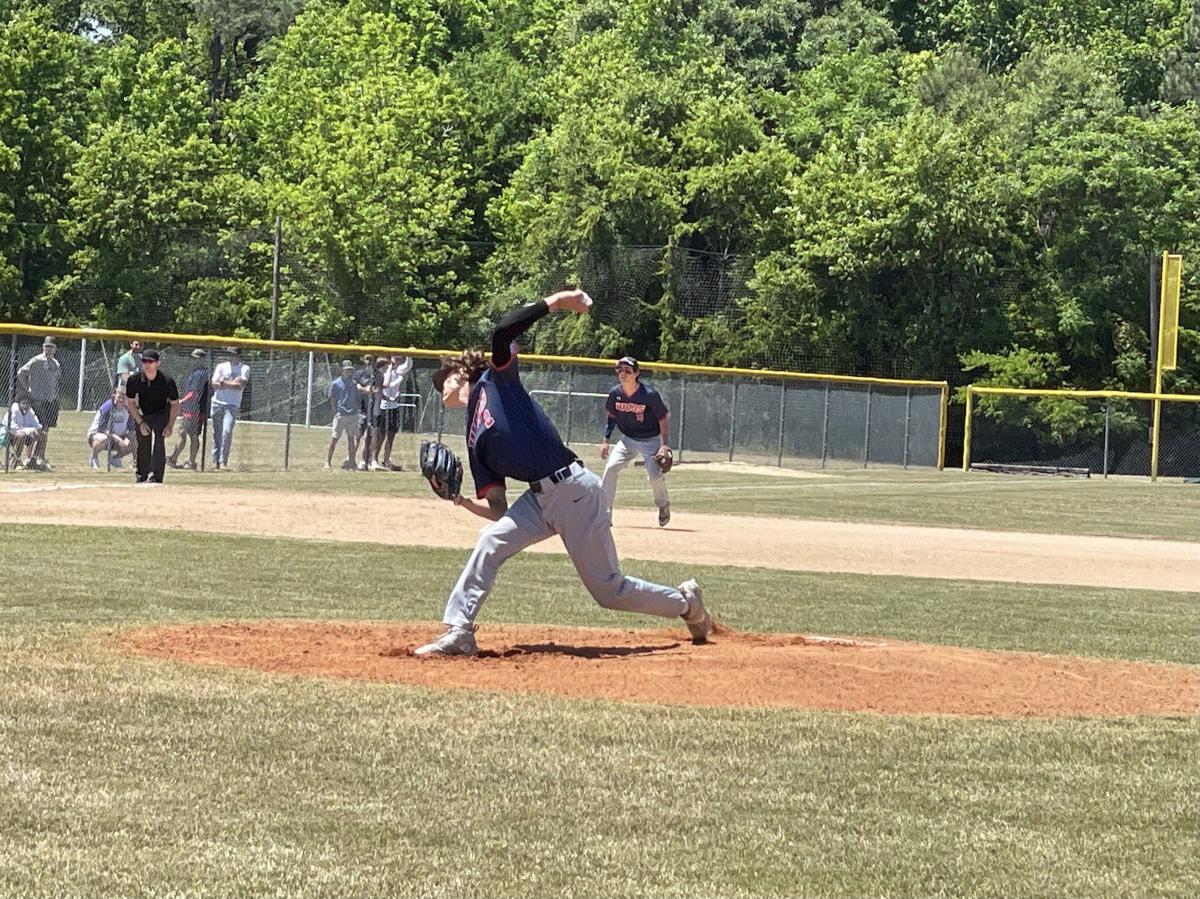 Wayne Country Day starting pitcher Garrett Moffett throws the ball from the mound as he works to strike out a Burlington School batter in the state championship series. 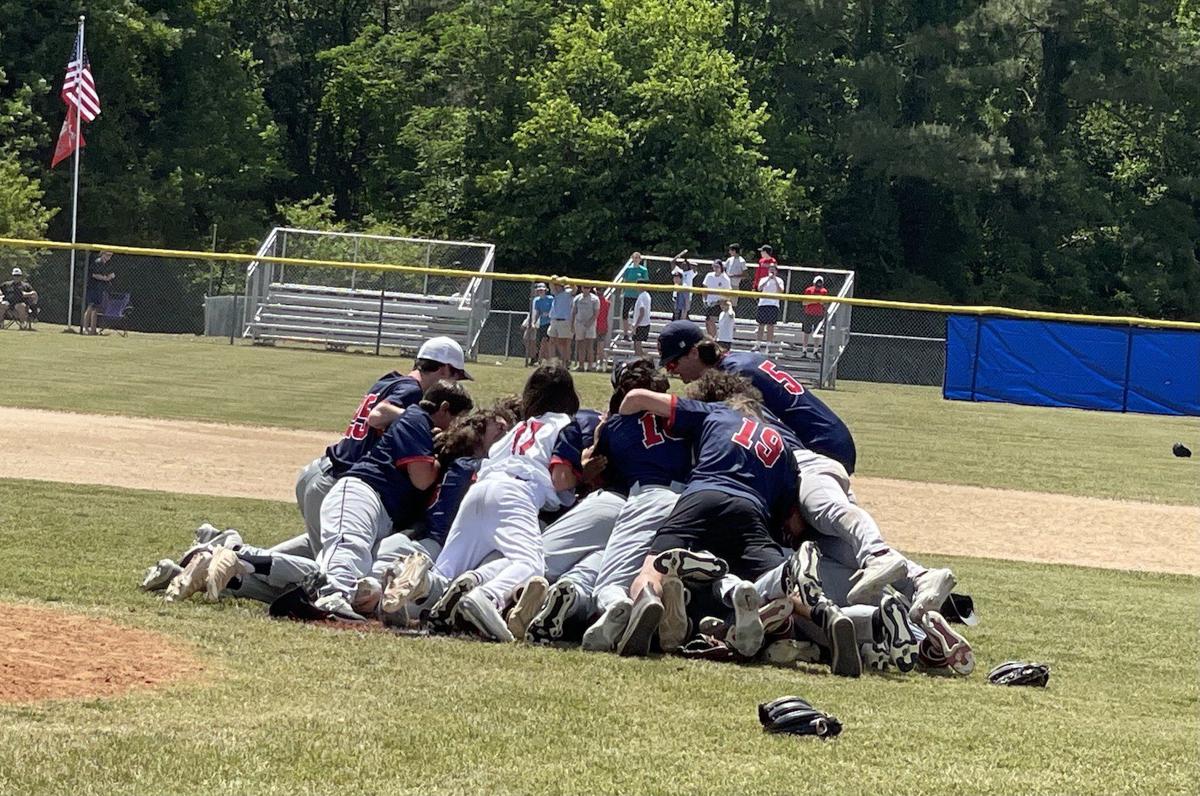 Wayne Country Day starting pitcher Garrett Moffett throws the ball from the mound as he works to strike out a Burlington School batter in the state championship series.

In Friday’s game, the Chargers got off to a strong start when starting pitcher Braedon Collins quickly worked through the top of the first inning without giving up a run.

When the Chargers came up to bat in the bottom of the inning, they set the stage for a strong start by scoring four runs.

Chargers head coach Adam Pate said he challenged the team to score five runs in the first inning, which the team nearly matched.

“I was joking with them before the game saying let’s get five, just kind of giving them a goal,” Pate said. “It was a high number to reach for. We came up one run short of that five, and we got four, so that was really good.

“I thought we played well from that point forward in the game, and that kind of set the table for a lot of different areas to get us going.”

In the top of the second inning, Collins continued to dominate, and the Spartan batters were unable to put a run up on the scoreboard.

In the bottom of the second inning, the Chargers scored three runs, all from balls the players hit out of the park. The first home run was two-run shot hit by Moffett. The second home run was a solo shot hit by Willman.

The Chargers continued their offensive onslaught through the rest of the first game, which included another two-run home run from Moffett in the fourth inning. Collins, who contributed to the Chargers’ offensive success with two hits and a run, pitched all five innings, allowed only one run and struck out seven batters to propel the Chargers to a 12-0 victory.

Pate said the team played strong on offense and Collins’ pitching set the team over the top in the first of the two-game series.

“I thought we swung the bats really well,” Pate said. “Obviously Braedon pitched really well. We didn’t have to use any (relief) pitchers but, offensively, man our kids they have been swinging. There have been a lot of big performances.”

In game two of the series, the Chargers were unable to get off to a strong start but hit their stride by scoring nine runs in one inning and holding back the Spartans throughout the game.

In the top of the first inning, all three Charger batters either struck out or grounded out as the Spartans’ starting pitcher Wagner Morrissette repeatedly found the strike zone.

The Spartans faced similar struggles in the bottom of the inning when they went up to bat, as the Chargers’ starting pitcher Moffett brought his A-game.

The Wayne Country Day pitcher quickly retired all three batters to end the first inning at 0-0.

The game remained scoreless with both pitchers dominating until the fourth inning when Everette Johnson scored from home on an error when Morrissette tried to pick him off at third base but threw the ball away from the third baseman into the outfield.

Morrissette then threw a wild pitch that resulted in Gavin Johnson scoring, giving the Chargers a 2-0 lead. The Spartans’ batter then walked three batters home with the bases loaded to give the Chargers a 5-0 lead before he was pulled from the game by the Spartans’ head coach.

The Burlington School relief pitcher, who replaced Morrissette, was unable to get the Spartans out of the bases-loaded jam in the next at-bat. Instead, he walked the next two batters to give Wayne Country Day two runs. The Chargers ended up scoring two more runs in the inning off a sacrifice fly and an RBI single before the fourth inning was finally over for The Burlington School.

After the Chargers took nine runs in the fourth inning, the Spartans were unable to make the game competitive again. The Spartans continued to give up run after run while being able to score only one run in the three remaining innings. The Chargers won 15-1 with Moffett only allowing two hits, zero earned runs and nine strikeouts in six innings pitched. Watt earned the save in the seventh inning with one strikeout and no hits allowed.

The Chargers swept the two-game series and finished their baseball season with a 19-1 record.

The team’s win overshadowed their previous season, which was cut short due to the pandemic, Pate said.

“Everyone is just living life and enjoying it,” Pate said. “The kids did that all year, and I was excited that we were able to get a full season in, be successful, and be here today to celebrate.”