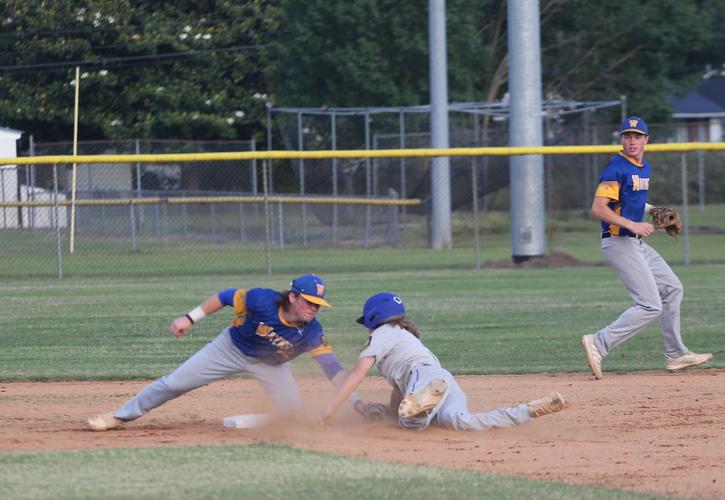 Wayne County Post 11’s Lane McClean tags out the Kinston Post 43 runner who is trying to steal second base. 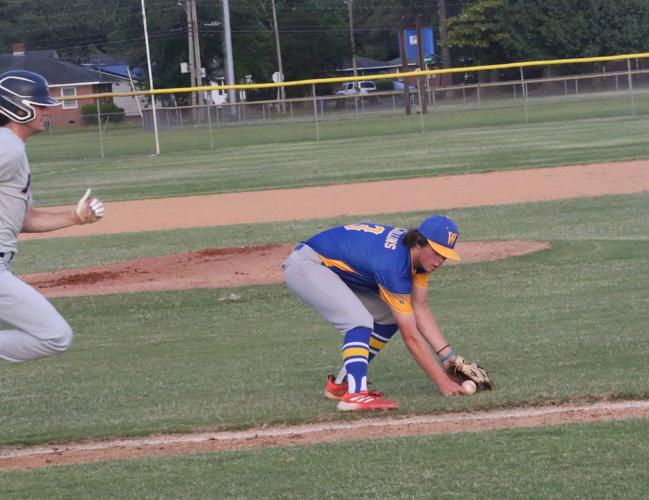 Post 11 pitcher Braeden Collins picks up the baseball as he tries to make a play after getting hit in the shin. 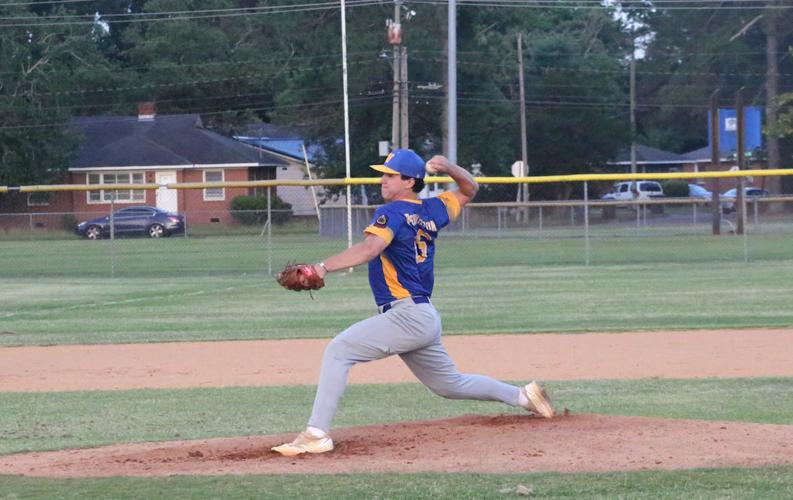 Wayne County Post 11’s Lane McClean tags out the Kinston Post 43 runner who is trying to steal second base.

Post 11 pitcher Braeden Collins picks up the baseball as he tries to make a play after getting hit in the shin.

KINSTON — Wayne County Post 11 came up short in its comeback attempt on Thursday night in a seven-inning battle against Kinston Post 43.

With school just ending for some Post 11 players, and others in the middle of exam week, Wayne County Post 11 came out on Thursday night looking like a team that had their mind somewhere else other than the baseball field.

Post 43 opened up the scoring early in the bottom of the first inning when a Post 43 batter hit an RBI single.

Braeden Collins, who was a bright spot for Post 11 early on, was able to get his team out of the jam by helping his catcher pickoff a baserunner for the first out and forcing a groundout and a strikeout for the next two. Collins was unable to escape the inning unscathed because a line drive nailed him in the shin during the inning.

In the bottom of the second inning, Collins limped up to the mound and appeared to be in pain. Even though Collins couldn’t plant on both feet to support his weight, he pushed through the pain, and he somehow limited Kinston to just one run in the inning.

In the top of the third inning, Post 11 scored its first run of the game without recording a single hit.

The score came thanks to some excellent base running by Lane McLean. McLean advanced to second off a throwing error by the Post 43 third baseman. Thanks to another Kinston error, McLean advanced to third base, and he finally scored on the next play off an RBI ground out from Mason Moffett.

Logan Merritt stepped up to the plate following the score and earned the first hit of the game with a two-out double. Post 11 was not able to capitalize on the hit, and Merritt was left stranded at second base.

In the bottom of the third inning, Collins was still having trouble putting weight on the injured leg pitcher, so Will Pennington came up the mound to start the inning.

Pennington found early success by striking out the first two batters he faced, but he struggled to get the third out, and Kinston managed to load the bases. With the bases loaded, he once again found command of his pitches, and he struck out the next Kinston batter to end the inning.

After Post 11 batters were unable to provide Pennington any run support, Pennington was faced with the pressure of keeping the game within one run in the bottom of the fourth.

He was unable to do so as his struggles to find the strike zone continued, and Pennington walked in a run to give Post 43 a one-run lead. However, Pennington recovered and got out of the bases loaded jam during the next at-bat with a big strikeout to end the inning.

After not adding any runs in the fifth inning, the bats finally came alive for Post 11 in the top of the sixth inning.

Thanks to a single and two walks, Post 11 was able to load the bases with two outs, and just like Kinston in the bottom of the fourth, Wayne County scored a run off a bases-loaded walk. Post 11 was unable to take advantage of the bases loaded situation, which is something Wayne County Post 11 head coach Adam Pate said probably cost them the game.

“No doubt (that was our best chance),” Pate said. “When you can work a couple of walks and score a run when you’ve struggled to score runs all night, you are definitely feeling a lot better.

After failing to tie the game in the sixth inning, Post 11 was unable to even get on base in the seventh, and Kinston held on to win 4-3.

Pate also said that although he was disappointed with his offense, he was very proud of his pitching staff.

“Obviously, you are frustrated when you lose,” Pate said. “When you look back at the way the game unfolded, we didn’t get enough guys on base. At the end of the day, that was a good high school legion baseball game because every pitcher that pitched for both teams did well, and they didn’t give up a lot of runs.”