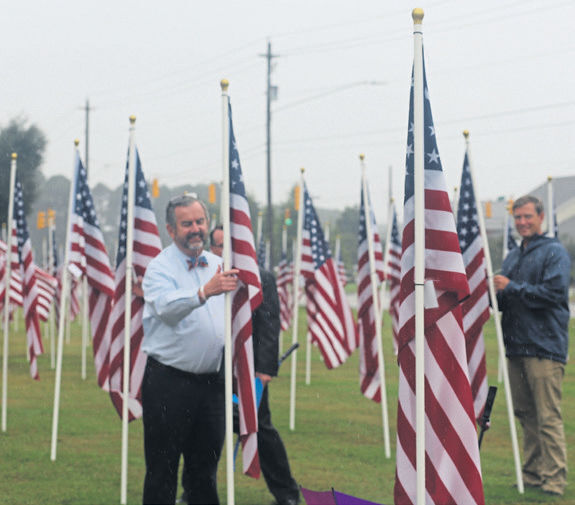 Looking at some of the 259 flags in the 2020 Field of Honor are Charlie Ivey, Goldsboro Rotary Club member, left, and Kyle Saylors, Rotary club member. 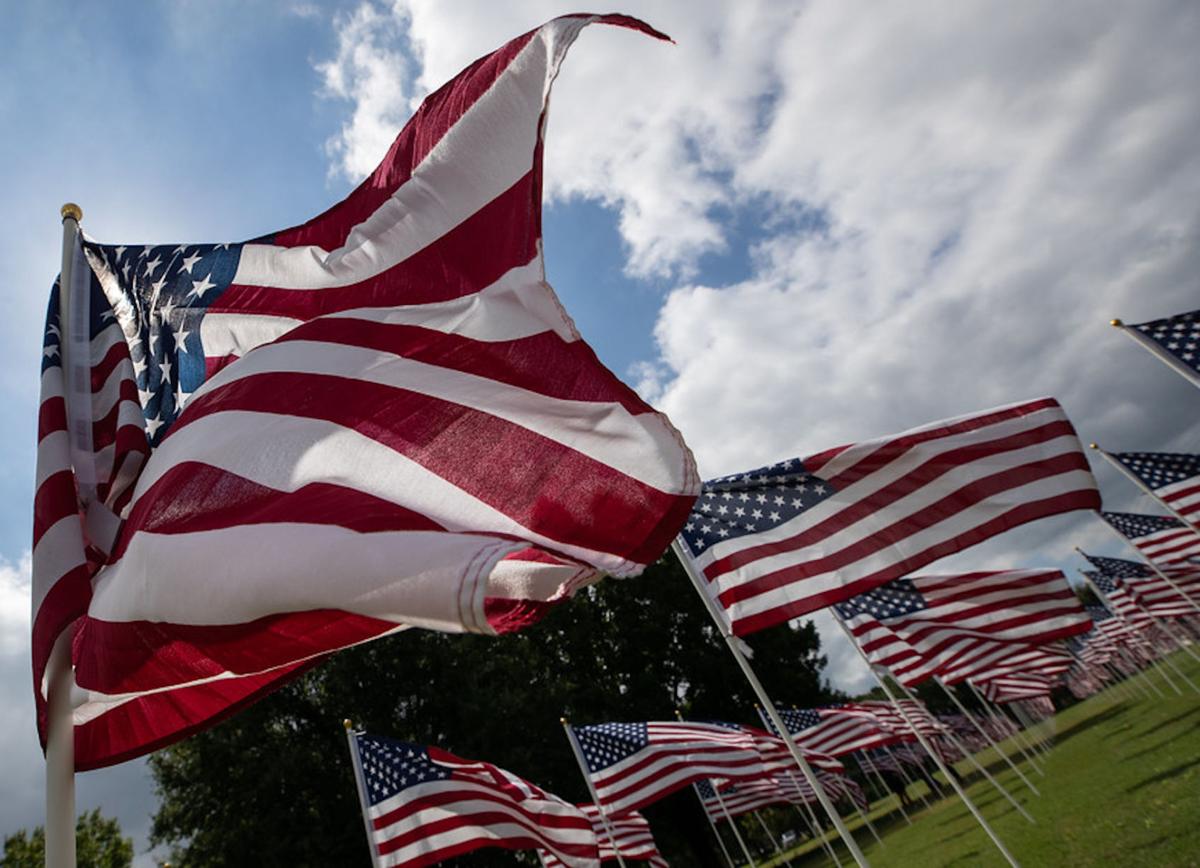 Last year was the first ever Field of Honor in Goldsboro, held at Wayne Community College.

Flags wave in the wind at Wayne Community College, along Wayne Memorial Drive, at last year’s Field of Honor. 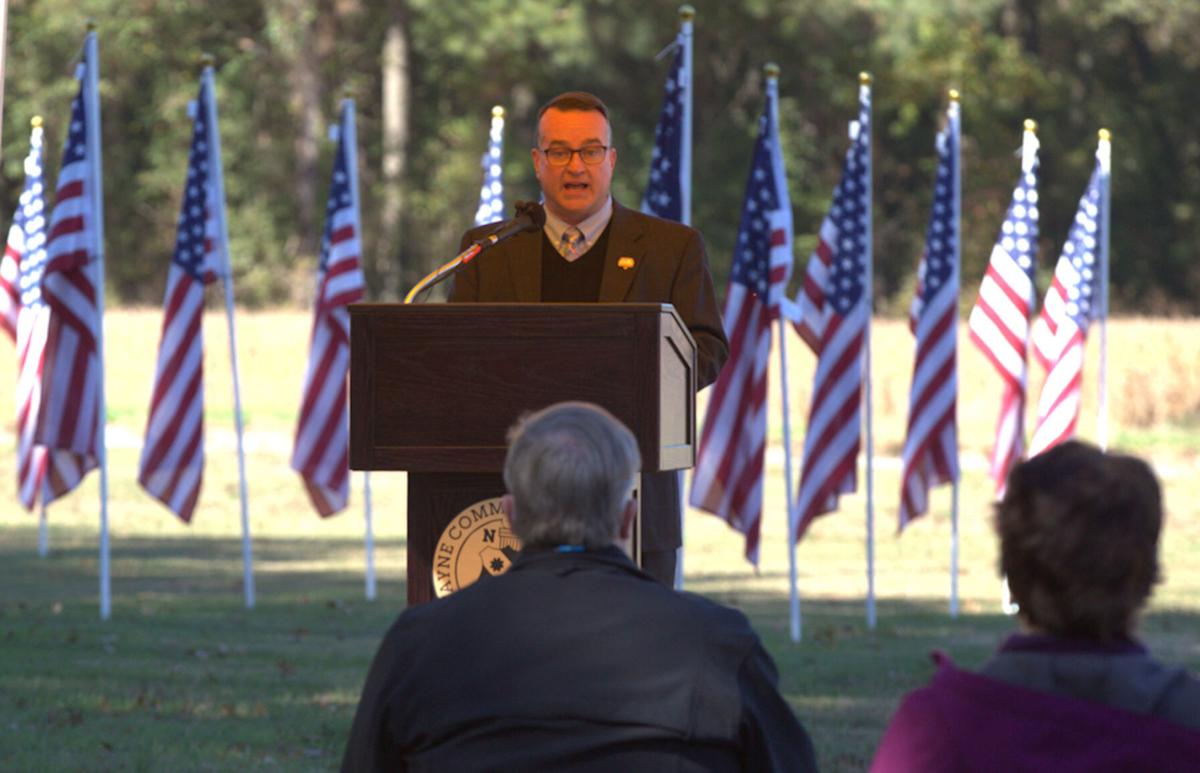 was the speaker at the Field of Honor closing ceremony last year.

Looking at some of the 259 flags in the 2020 Field of Honor are Charlie Ivey, Goldsboro Rotary Club member, left, and Kyle Saylors, Rotary club member.

Last year was the first ever Field of Honor in Goldsboro, held at Wayne Community College.

Flags wave in the wind at Wayne Community College, along Wayne Memorial Drive, at last year’s Field of Honor.

was the speaker at the Field of Honor closing ceremony last year.

The front lawn of Wayne Community College will once again be filled with American flags flying in the wind, as the college hosts the second annual Field of Honor starting in September.

The Field of Honor will be filled with flags Sept. 9 through Nov. 18 and visible along Wayne Memorial Drive at the college.

Sponsored by the Goldsboro Rotary Club, the event is a way for Wayne County residents to honor active duty and military veterans, first responders and others with a flag.

The flags were available by going to goldsbororotary.org and printing the form, filling it out and mailing it to the Goldsboro Rotary Club or by emailing rotaryclubofgoldsboro@gmail.com.

Each flag is $40 and is 3 feet by 5 feet, and comes with a commemorative coin and a tag for the flag.

Once the Field of Honor ends in November, people may keep their flags or turn them back in to the Goldsboro Rotary Club to be reused.

Organizations or individuals can do different sponsorships for a certain number of flags, said Patricia Pfeiffer, WCC interim president and Goldsboro Rotary member.

“We had several sponsors last year,” she said.

Pfeiffer said the Rotary Club asked the college to host the Field of Honor again this year.

“To me, it’s just a wonderful display of our commitment to heroes in our county,” Pfeiffer said. “We have a lot of veterans who work here, a lot of people that are associated with it, having a loved one in service.”

Once all the flags are put up, there will be a map legend that people can look at to find a specific flag, Pfeiffer said.

Coinciding with the Field of Honor will be the POW/MIA chair display in the Wayne Learning Center atrium at the college Sept. 7 through 17.

“Last year the Air Force Sergeants Association approached us about being able to house the chair in honor of the POW/MIA individuals, and we hosted that,” Pfeiffer said.

New this year will be the Moving Wall Vietnam Veterans Memorial replica, which will arrive at the college Sept. 15 with a 150-biker escort, including the Patriot Guard and Combat Veterans Motorcycle Association.

The Goldsboro Fire Department will hang a huge flag over part of Wayne Memorial Drive to welcome the wall.

People in the community are encouraged to line both sides of Wayne Memorial Drive around the college the day the moving wall arrives.

There will be an opening ceremony for the wall Sept. 15 at the college, with a closing ceremony Sept. 17, which will include a missing man flyover.

The wall will be located in the campus parking lot, and visitors may stop and look at it and even take rubbings from it.

Pfeiffer said there will be other patriotic events during the Field of Honor.

One of those will be the 20th anniversary remembrance event, a tribute stair climb Sept. 11 in the upper and lower exterior breezeways and stairwells between the Azalea and Spruce buildings at the college. It will be sponsored by the college’s continuing education emergency services program, including EMT, paramedic, firefighter and law enforcement students.

Tara Humphries, public information officer and civic and community involvement coordinator at the college, said the students climb the 78 stories, 38 laps on the “track,” to replicate the highest known floor that the New York fire department firefighters reached in the south tower of the World Trade Center before it collapsed.

All the events coincide with the Field of Honor, which Pfeiffer said was well-received last year.

“My biggest hope is to realize that there are heroes among us,” she said. “Some heroes give their lives for this country. Some heroes wear a uniform every day. Some heroes walk the halls of the hospital, ride in an ambulance, ride in a firetruck.

“But we have the opportunity to honor those individuals.”

Proceeds from the Field of Honor will support charitable programs of Rotary International and Goldsboro Rotary Club.