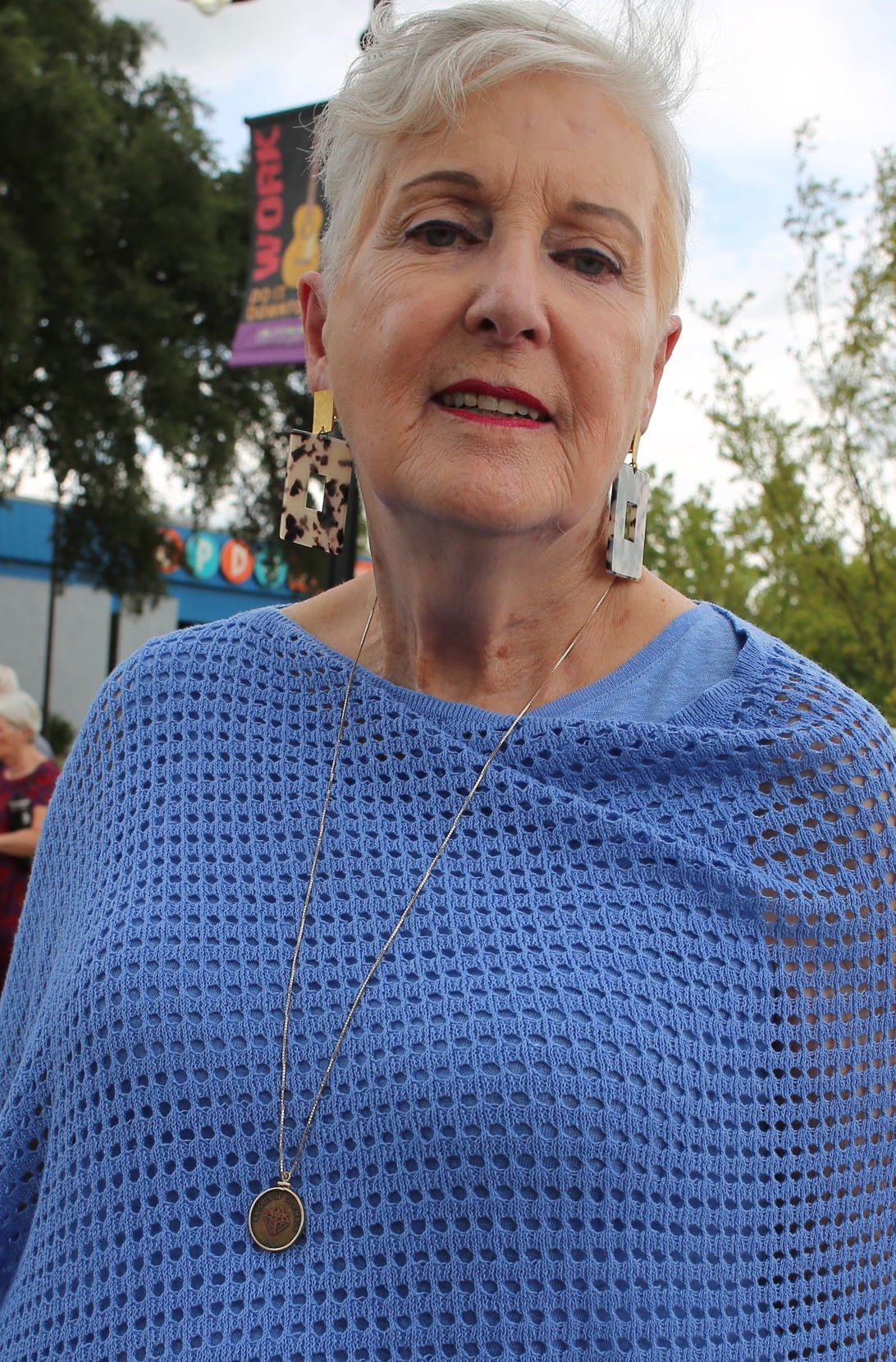 Barbara Cleary O’Connor, wife of the late Capt. Peter Cleary, still wears the medal that her husband wore on his final mission in Vietnam when his plane was shot down. 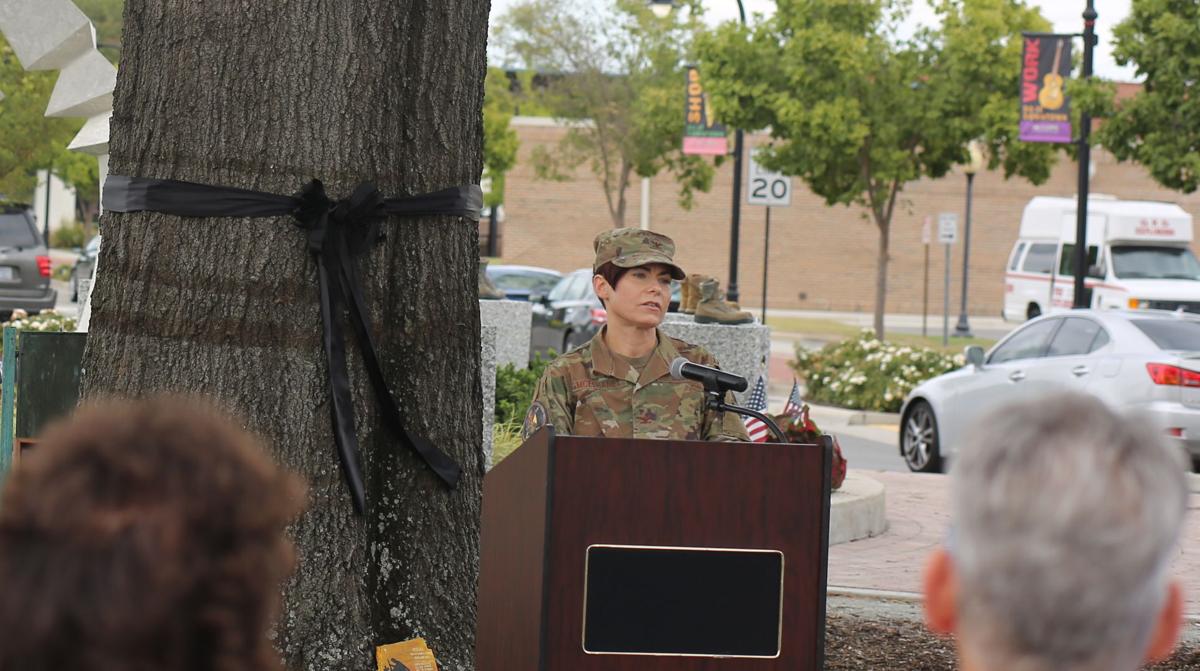 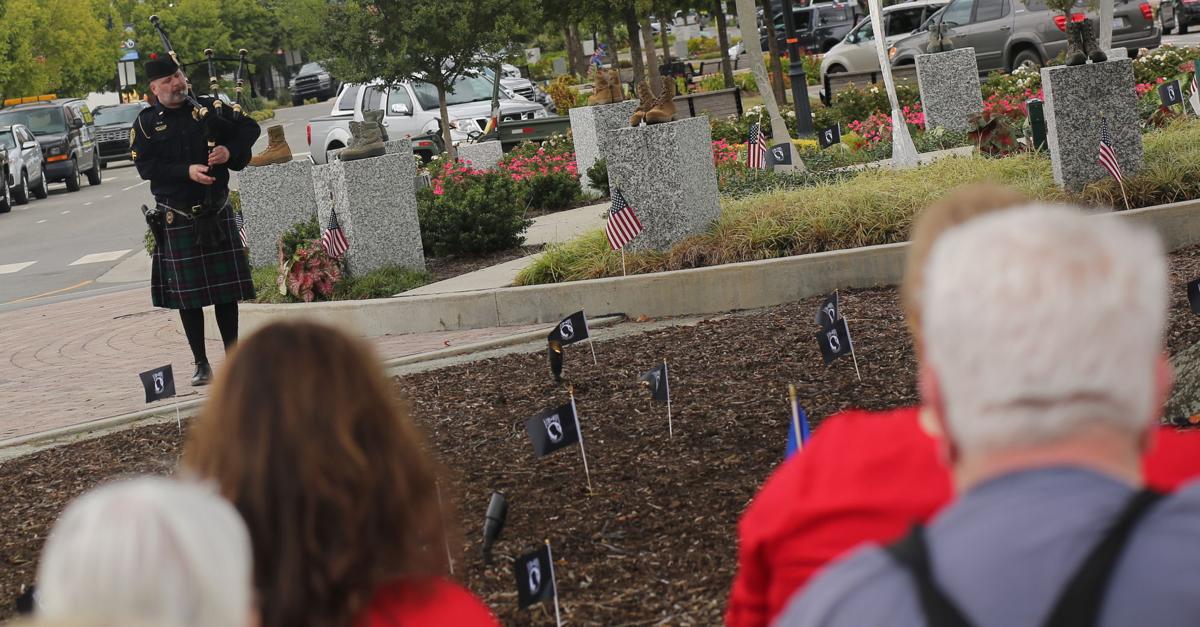 During a moment of silence at the Freedom Tree rededication Sept. 16, a bagpiper plays “Amazing Grace.”

Barbara Cleary O’Connor, wife of the late Capt. Peter Cleary, still wears the medal that her husband wore on his final mission in Vietnam when his plane was shot down.

During a moment of silence at the Freedom Tree rededication Sept. 16, a bagpiper plays “Amazing Grace.”

Some wiped away tears while others sat in solemn silence as Goldsboro’s Freedom Tree was rededicated Sept. 16.

The tree, planted in 1973 at the southern end of Center Street, was part of the POW/MIA week activities.

It was planted in honor of the late Capt. Peter Cleary, who was shot down during the Vietnam War and declared missing in action for the next 29 years.

Cleary’s widow, Barbara Cleary O’Connor, and her children and grandchildren, attended the ceremony.

“I think this is beautiful,” she said. “I was astounded by this tree. I was here when it was planted. It was about 8 feet tall and skinny. It was a little twig, and now it’s just blossomed so beautifully.”

O’Connor said that for the many years that her late husband was missing in action, the family had no marker or anything for him — just the tree.

“Once we received his remains, they were buried at Arlington,” she said. “But the tree has always been the only thing to mark his presence on earth, a place for us to go and feel close to him.”

The Cleary family had been stationed at Seymour Johnson Air Force Base for a year before going overseas. When he was killed, Cleary’s wife and family were in the Philippines. They were all packed up and ready to head to their next base, as this was supposed to be Cleary’s last combat mission.

O’Connor still vividly remembers the day his plane was shot down. She said she was very anxious and uneasy all day, but didn’t know why.

The day the military found Cleary’s remains, they notified O’Connor’s son as he was the blood connection and the oldest next of kin.

“He was in New York, and I was in Massachusetts,” O’Connor said. “They arranged for us to come down for some event. While we were sitting around the table at breakfast the next morning, he (her son) told us they had found his remains. I just sobbed. It had been so long, so long.”

O’Connor said it was a miracle that her husband’s remains were found at all.

“And it was because on that final mission, instead of just wearing dog tags, which is what they were supposed to wear when they went into combat, he told his friends he was going to wear his wedding band and a small medal he liked to wear,” she said.

“It was 30 years later that a Vietnamese man turned in the medal, and by following where he had found it, they located his crash site.”

O’Connor said the military told her that a surface-to-air missile hit her husband’s plane.

“It was a blessing,” she said. “I always worried that he might have ejected and been captured.”

O’Connor described her late husband as a wonderful husband and father.

“He was a wonderful young man, and I was blessed to have him for six years,” she said. “He left me with two beautiful children and now six grandchildren, and they’re very special.”

During the tree rededication, former Goldsboro Mayor Tommy Gibson talked about getting the tree planted. He also talked about a campaign the county had to get everyone to wear POW/MIA bracelets.

“I don’t know how many we gave out,” he said. “But everybody’s wrist was sincerely green because the bracelets were true copper. Goldsboro was called the city with green wrists.

“When the war ended and they brought the POWs home, that was a scene with thousands of Wayne County and city of Goldsboro people, who came up there when the guys came up on the flatbed, took their bracelets off and put them on the flatbed. It was something, absolutely a heart-wrenching thing.”

Another event speaker was Col. Tammy McElhaney, 4th Mission Support Group commander at Seymour Johnson AFB, who talked about honoring those who are still missing.

“There are 81,000 that are still missing from previous conflicts,” she said.

“But it’s mostly about honoring our families, like the Cleary family, that are here today to honor their fallen hero. It’s about keeping those memories alive so we can keep the efforts going to find the 81,000 that are still missing. But also, it’s for those of us who are currently serving. It’s a reassurance that if we fall, our country will go to every effort to try to find us.”

“Our biggest hurdle is keeping the memories alive,” she said. “Unfortunately, a lot of the families, like sisters and brothers, are aging out.

“But what we are starting to see that’s very encouraging is the younger generation, everything from grandchildren to great-nieces and nephews, getting involved. They want to learn more about their missing relative because they’re heroes. And they want to know when we’re bringing them home.”

During the ceremony, Ben Gibson, son of the former mayor, presented O’Connor with a painting he did of the Freedom Tree.

“Getting to know the family, trying to find out details like insignias that might represent the plane that Mr. Pete was flying, was exciting,” he said. “It was a learning process as well, learning about that era, learning about what he did for a living and what a hero he actually was.”

After the tree rededication, Chapter 371 of the Air Force Sergeants Association began the start of its annual POW/MIA 24-hour vigil, some carrying the POW/MIA flag through downtown Goldsboro while others read the names of the military personnel still missing.